For most PC gamers, the best part about playing on a PC over console is the added control and flexibility of using a mouse and keyboard. More specifically the mouse gives you the amazing control that just can't be found with a gamepad. The keyboard, although flexible, has always been used for typing first and gaming second. A few companies have brought out gameboards that replace the keyboard all together giving you access to all of the buttons needed without any of the extras. Logitech's G13 is their first attempt at a gamepad and with all of their experience with gaming accessories, I have high hopes. 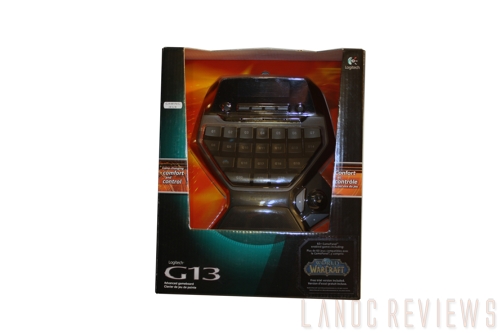 Logitech packed the G13 into their typical packaging similar to what we saw the G9x com in. The packaging does have a full window on the front giving you a full view of the size and shape of the G13. The back of the box has a few pictures including a few showing off a few of the color possibilities that you can run. Inside you will find the quickstart guide, an important information book, and a software disc. 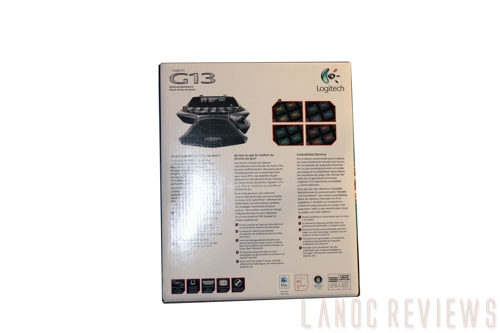 The G13's software pack includes both a Key Profiler and  Logitech's LCD manager, the same software needed for both the G19 and G15 keyboards. The G-series Key Profiler is used to set macro's and key bindings for all 25 buttons (29 if you count the directional stick). To get things started I scanned for all of my installed games and came across one large issue right away. The software unfortunately only detects games that are installed outside of Steam. With most of my games running through Steam this means I will have to start from scratch on each of my game profiles. Lucky for me I spend most of my time playing FPS's so this shouldn't be too difficult. Each button has the ability to be set to any of the following.

-A full macro, ether on the fly or within the program

-Set to a function (example: Email, Web, Media Player, Calculator, or My Computer)

-Set to a shortcut (can open any folder, file, Internet address, and program on your computer or over the network) 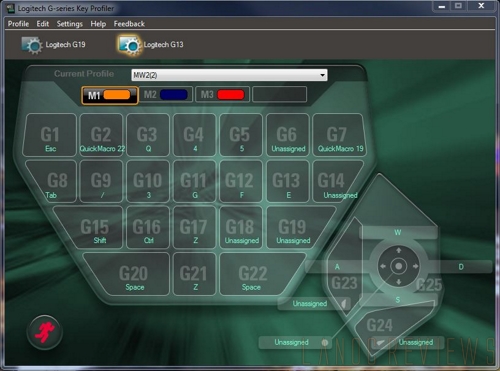 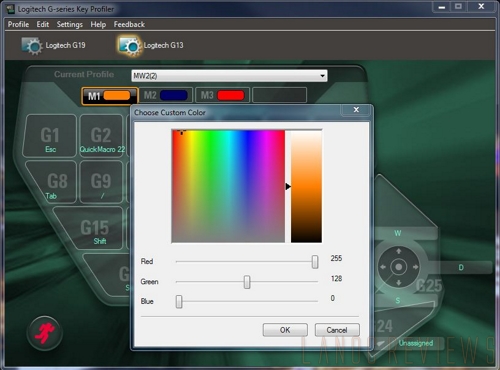 Another feature of the Key Profiler software is the ability to have it recognize that you are in a specific game and to switch to the profile that you have made for said game. This is an amazing feature if you are playing a game outside of Steam, of course I had issues with it. Beyond the game recognition you also have the option to switch between three profiles just like on the G15 and G19 (M1, M2, and M3). Each of the profiles can be set to light the keys and screen to any color at all. 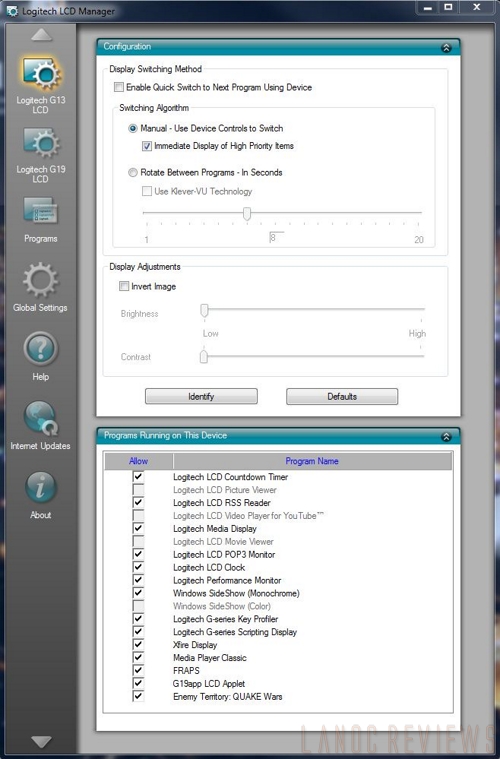 Logitech's LCD manager hasn't changed a bit in the time between our G19 review and the G13. In fact it's the same software, I didn't even have to reinstall it. As you will see in the pictures below the software shows both my G19 and G13 tabs. All tabs that work on the G15 also work on the G13. The only G series LCD applications that will cause you problems are applications made for the G19 this is simply due to its color screen. I won't go into all of the applications that you can run on the G13's screen, but anything you need is ether already installed or available for download. 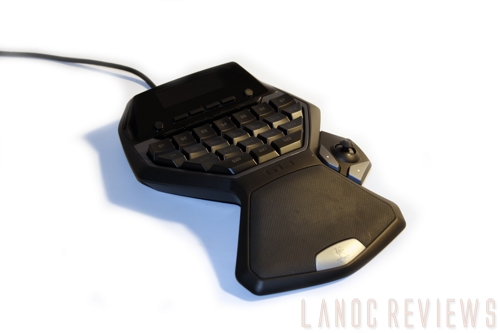 All of the fancy key colors and monochrome LCD's in the world won't save you if the gamepad doesn't perform. Because of that I spent a long time playing around with the G13 to get a good idea of how it will help or hurt the average gamer. First off, this isn't really something you just hook up and expect in game ass-kicking to follow. Even though the default layout is close to what you would use on your keyboard for, you will still find yourself hunting and looking for important keys at the wrong moments. That is why they included the ability to do a quick macro on the fly. After setting keys where I need them as I went it wasn't long before control started to feel natural. So natural in fact that you might find yourself wondering why you didn't pick one of these up sooner.

Where the G13 really stands out is for laptop owners. Laptop keyboards are NEVER ideal for gaming but after hooking up your G13 and a mouse you feel like you never left the comfort of home. One of our LAN event staff is a G13 fan and I have even seen him hook up everything to his big screen TV and toss the G13 on his leg for relaxed gaming sessions. 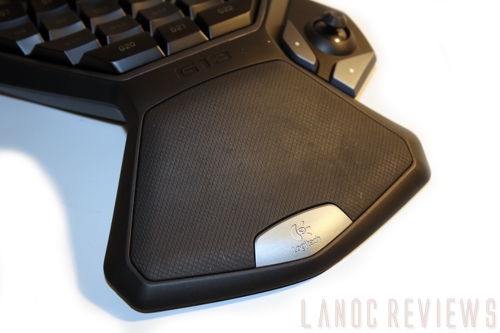 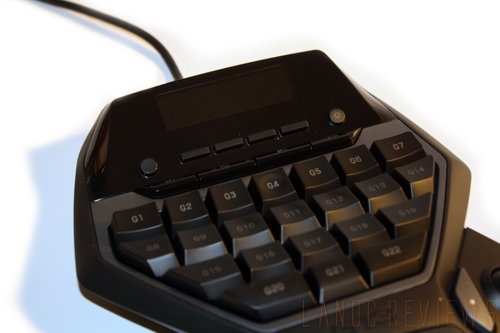 The key layout is natural and easy to reach with a concave design putting your fingers right in the middle. Your thumb rests right on the joystick. Console gamers will of course be excited to have a joystick for their PC games. The wrist rest is a good shape but made out of a very hard rubber. The texture is nice also very effective at keeping your hand cool. It would be great to see a little padding on the wrist rest so, let's hope Logitech considers this if they ever decide to make a 2nd generation G13.

There isn't much more than needs said that I haven't already covered. But if you haven't figured it out, the G13 can be hard to get used too but it totally works great once you do. You literally can program every one of the 25/29 keys to do anything at all maybe even order a pizza. The backlighting can be set to any color to match your setup and not only is the G13 useful, it's also very comfortable. You do have to take the good with the bad. As stated before the of any Steam integration is extremely problematic, hopefully they get in touch with Valve and work on that. It could be as as easy as an update to the software somewhere down the line. 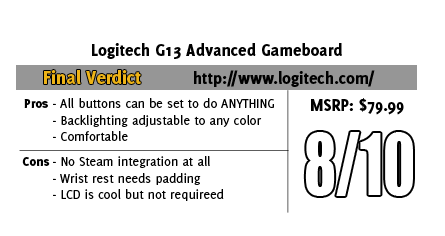 You might call him obsessed or just a hardcore geek. Wes's obsession with gaming hardware and gadgets isn't anything new, he could be found taking things apart even as a child. When not poking around in PC's he can be found playing League of Legends, Awesomenauts, or Civilization 5 or watching a wide variety of TV shows and Movies. A car guy at heart, the same things that draw him into tweaking cars apply when building good looking fast computers. If you are interested in writing for Wes here at LanOC you can reach out to him directly using our contact form.
Discuss this article
Log in to comment
Posts in discussion: Logitech G13 Advanced Gameboard

We have 1067 guests and one member online