The proverbial ink has hardly dried on our review of Sapphires HD6870 Flex and we are already introducing another member of the Flex family. That’s because Sapphire is hoping to give everyone the option to go Flex no matter the budget or performance requirements. This also happens to be the first HD6950 to come through our office, finally giving us a chance to check out the performance of AMD’s third in command. Talk about killing two birds with one stone, let’s take a look at the Sapphire FleX HD 6950 2Gb. 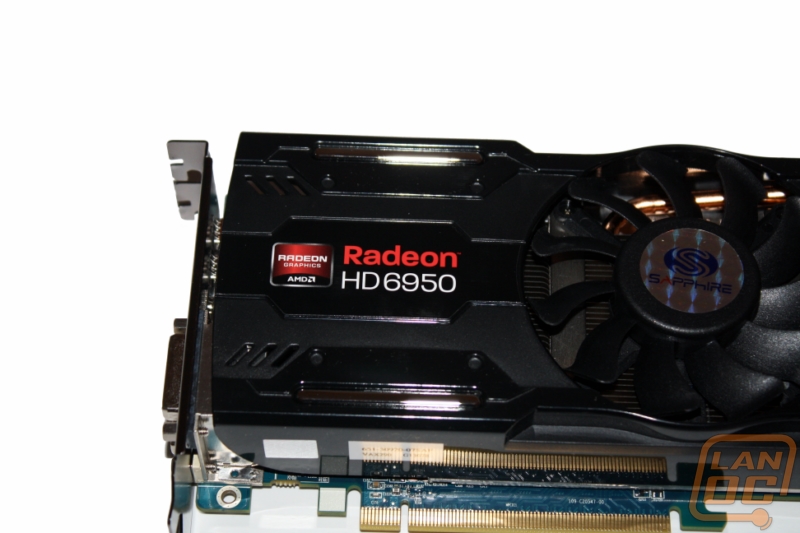 requirement of DisplayPort monitors or Active DP adapters, and can support up to 5 displays

with the use of a DisplayPort monitor or Active adapter. 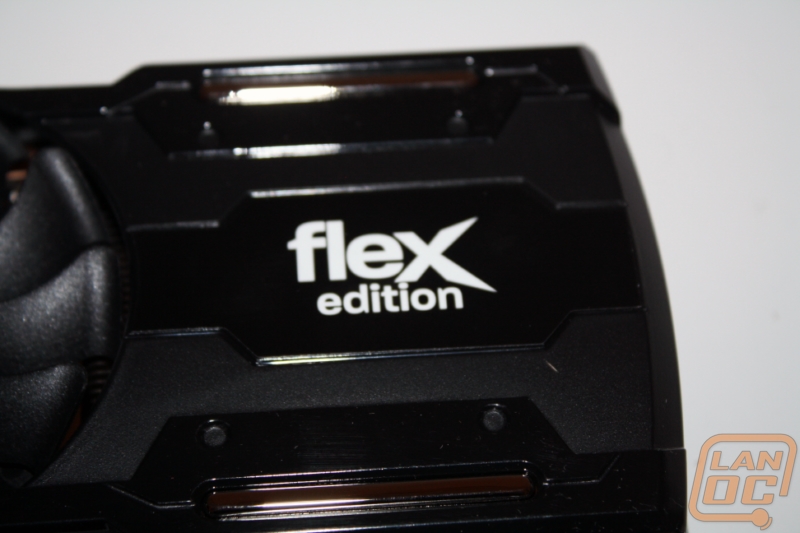 The metallic black and blue style that we have seen on past FleX cards for the packaging is back once again. Sapphire’s packaging is clear and easy to read with the model name on the front in a large font and all of the cards features along the bottom. Around back each of those features has a more in depth explanation in case you have any questions. Inside there is a second cardboard box that has the card right on top when opened. The card sits inside of a formed cardboard tray, inside of a bubble wrap static free bag with a piece of foam keeping the HD6950 FleX from moving around. 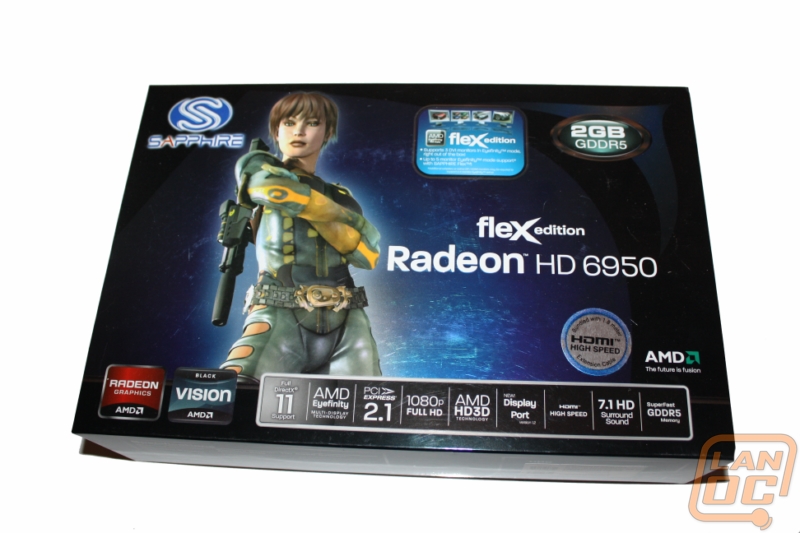 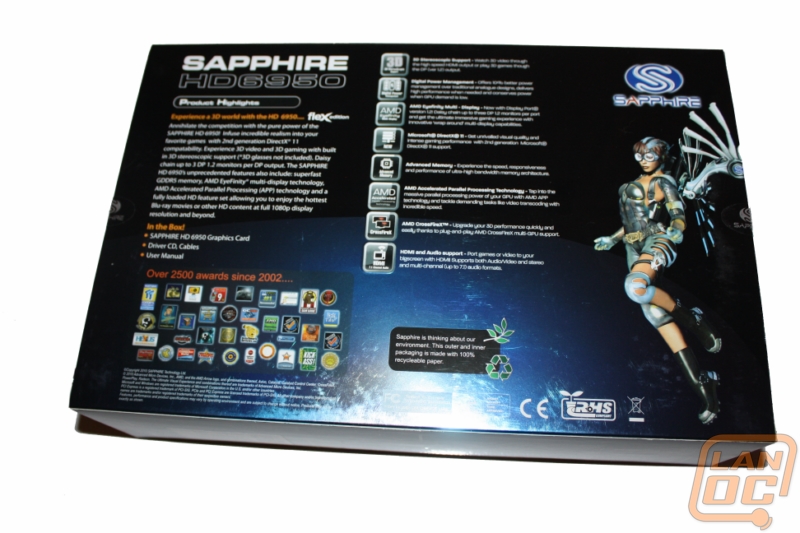 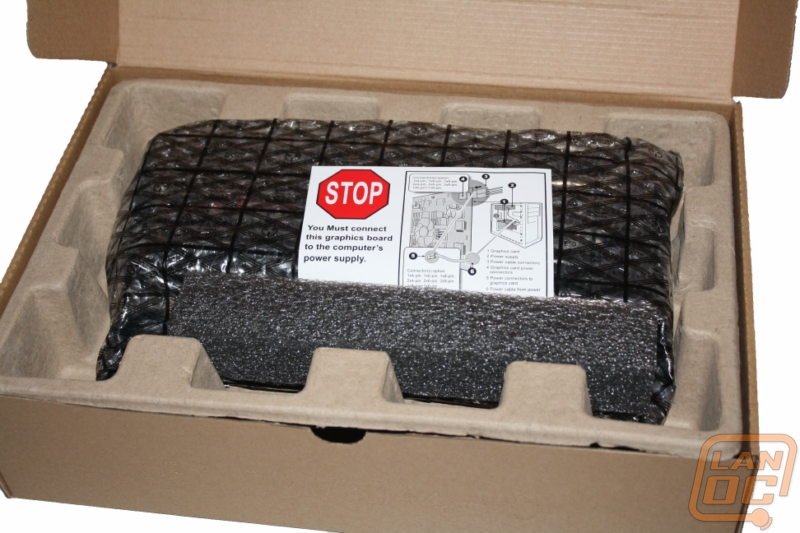 One of the great things about FleX series cards is the collection of adapters and cables included with the cards and this one is no different. You get a six foot long HDMI cable, Mini DP to DP Adapter, HDMI To DVI Adapter, DVI to VGA Adaptor, and two 4 pin Molex to 6 pin adapters for those who don’t have enough plugs on their power supply. Of course you also get a flexible crossfire adapter, I hope one of these days we see a crossfire ribbon cable that is in a more appealing color like black or blue, the current color can be an eyesore in some situations. Along with all of the adapters and cables you will get a driver installation disc, a quick installation guide, and a little information on their Sapphire Select Club. 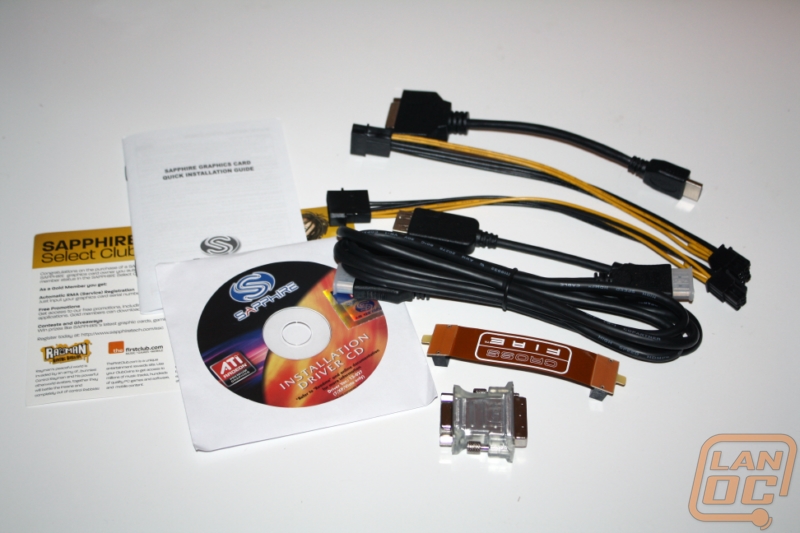 Multi monitor gaming has been growing slowly as LCD Monitors become cheaper and cheaper. We have even seen it trickle down to our LAN events and on our forums with a few people who have been sporting triple monitor setups from both AMD and Nvidia. Because of that it’s nice to know that if you pick up a couple extra monitors you can be gaming in no time on them all at once. With Nvidia this requires running SLI, even if you aren’t looking for the highest settings or performance. AMD on the other hand will let you run Eyefinity with one video card, but you will have to pick up a $30 DisplayPort to HDMI adapter unless you are running DisplayPort monitors. Sapphire cuts out the middle man with their FleX series of cards and builds that adapter into the card saving you the money and more importantly making the jump to Eyefinity that much easier. 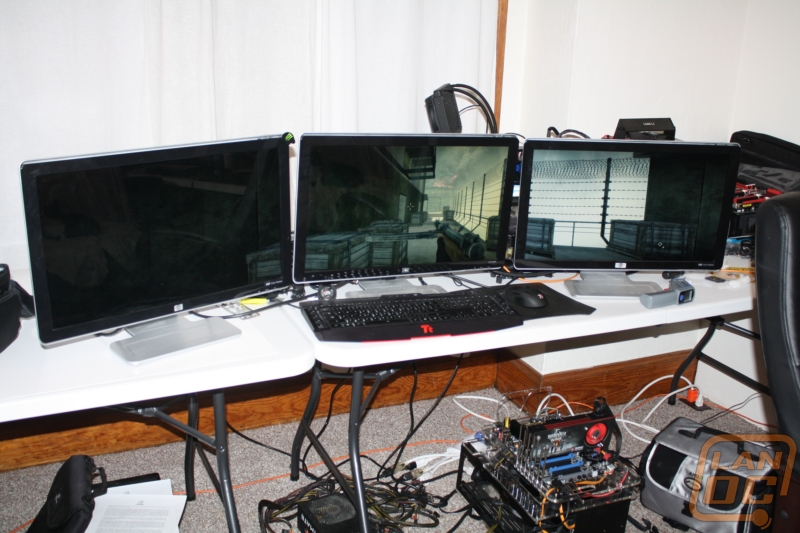 Sapphire went with their VaporX heatsink on the Flex, a little different from a reference heatsink. The fan is noticeably larger and located in the middle of the card this time around. Internally they have rearranged everything also match the relocated fan and to include their vapor-x chamber. 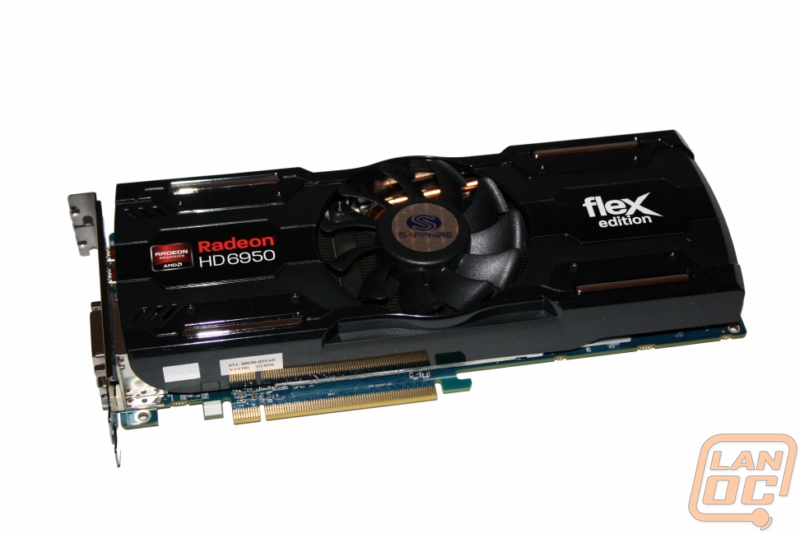 The Vapor-X chamber uses the same idea of a heatpipe to pull the heat away from all of the hotspots on the GPU and get the heat to the heatpipes, then to the fins/fans to cool things down. 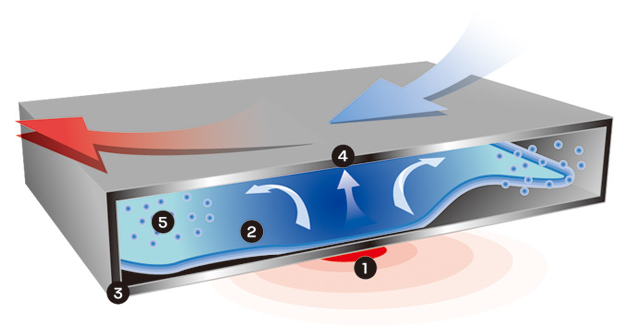 The overall look of the new design is, in my opinion, a lot better. It gives the card a strop industrial look that should look good in any case.

Up top they included a nice sapphire logo that will face out your window when the card is installed, a nice touch. 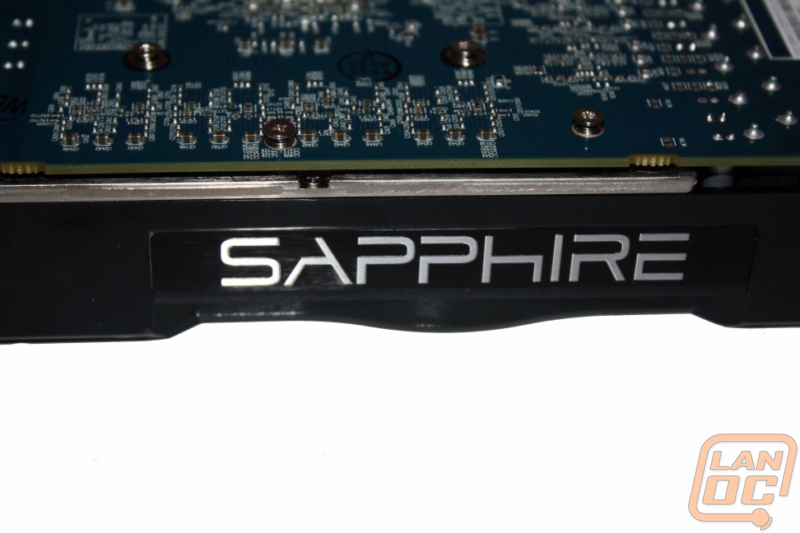 The rear panel has two DVI ports, an HDMI and two mini DisplayPorts. Like all AMD cards they have packed so many connection options onto the back that they are limited to a small 2/3 height vent to keep things cool. 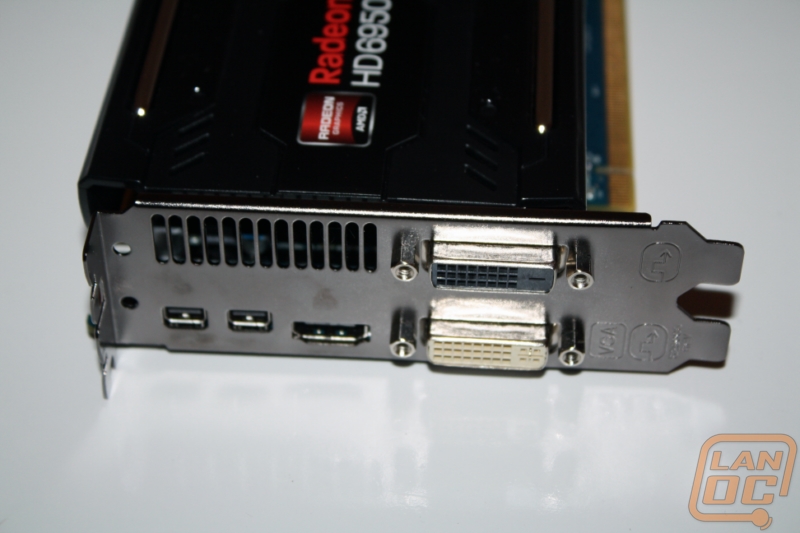 With the black theme that Sapphire has been doing with their motherboards I would love to see an all-black PCB and back plate version. But for now we are stuck with this blue 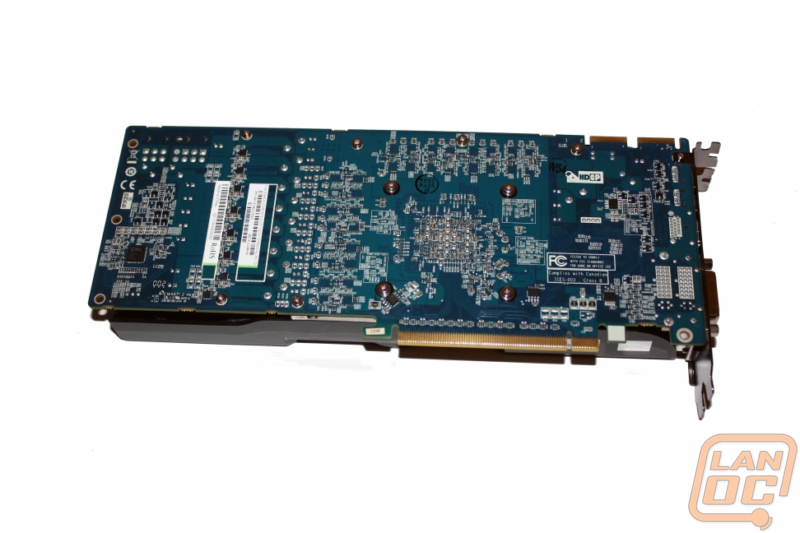 All HD6900 series cards have two connections for crossfire connections letting you run up to 4 cards in crossfire. HD6800 and below only have one, limiting them too two cards. 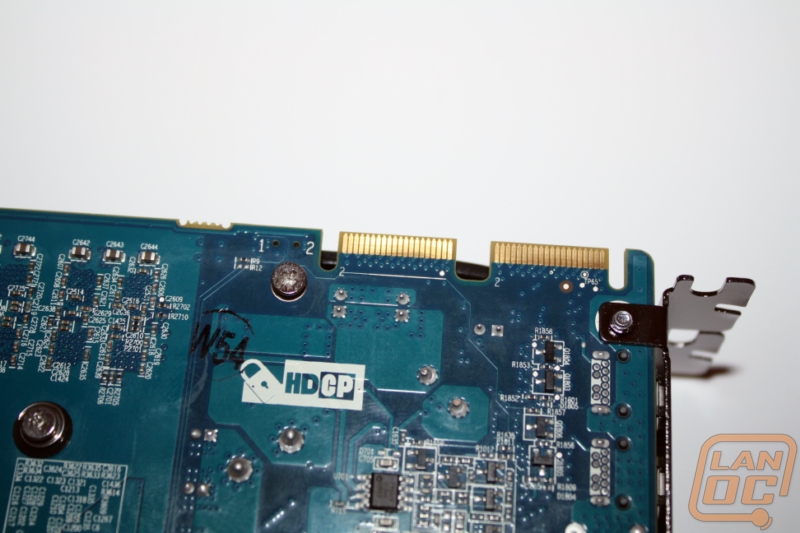 Two six pin connections rather than the 8+6 setup that is becoming more and more common on high end video cards. 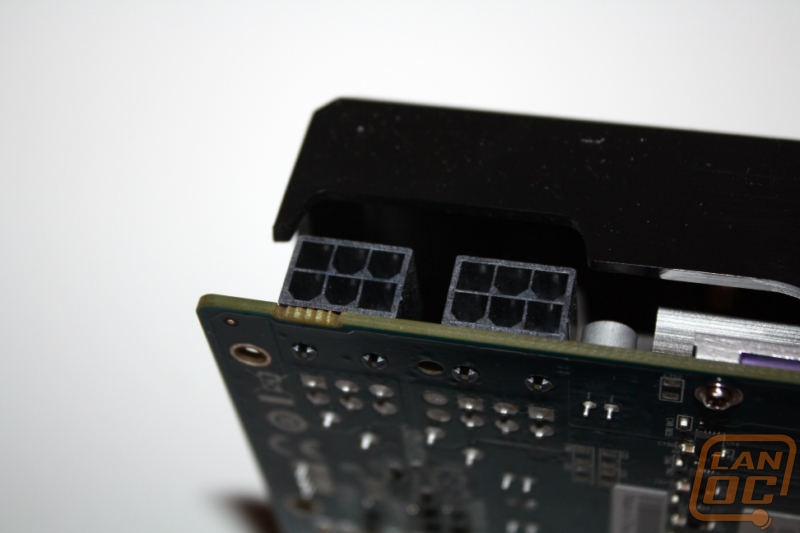 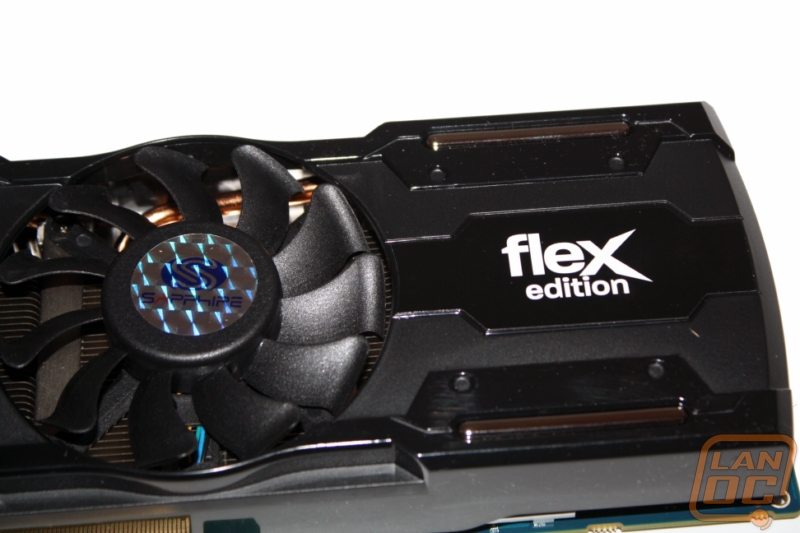 Pitting the HD6950 FleX up against some of the best top and midrange cards on the market we were able to get a good idea of where it stands. As is fairly typical, it really depends on if you are planning on playing a PhysX demanding game as the Nvidia cards perform a little better in that department. 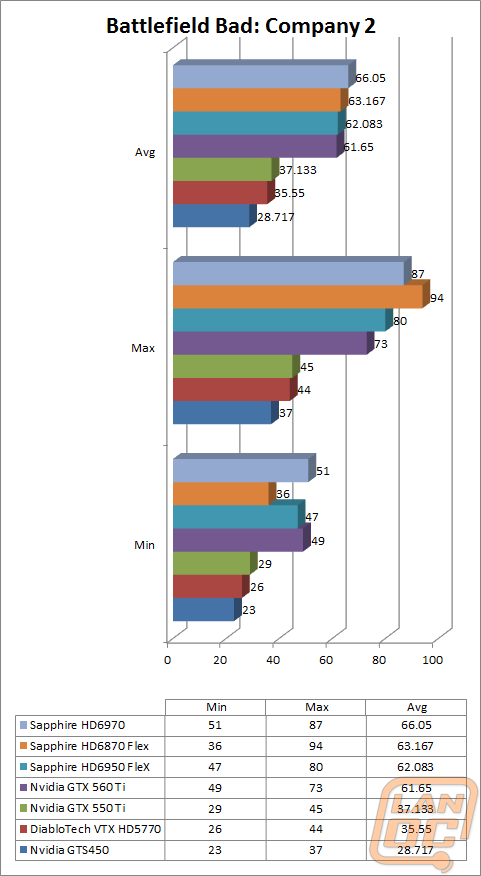 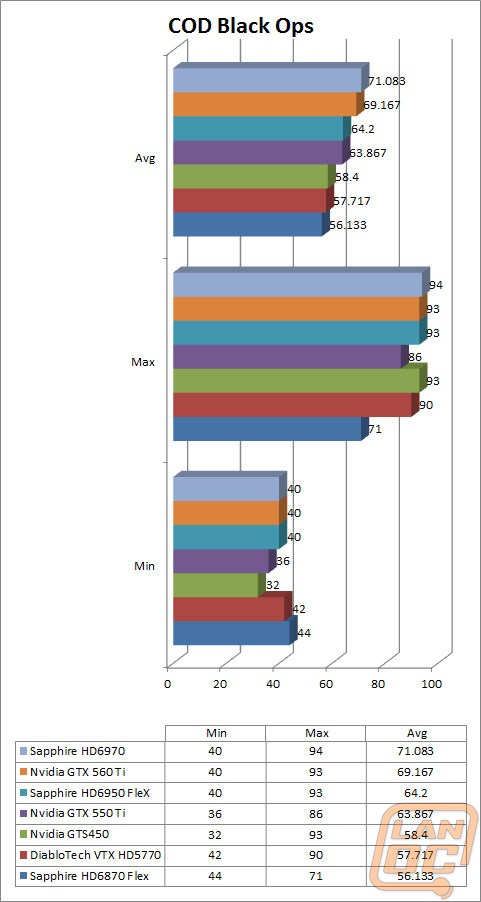 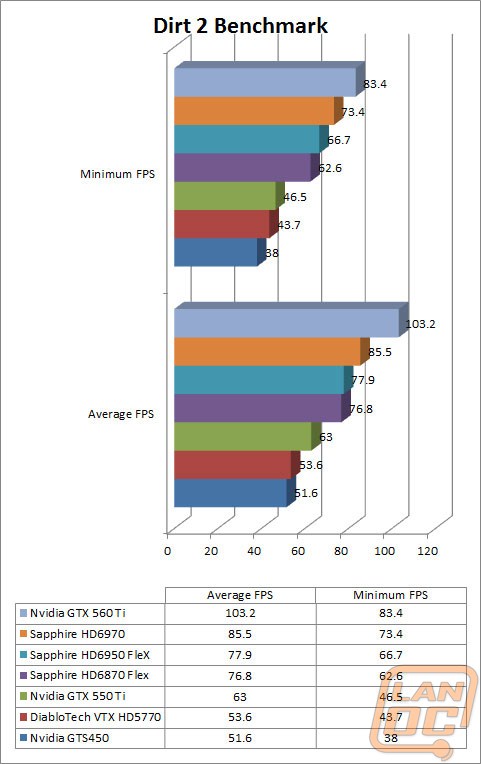 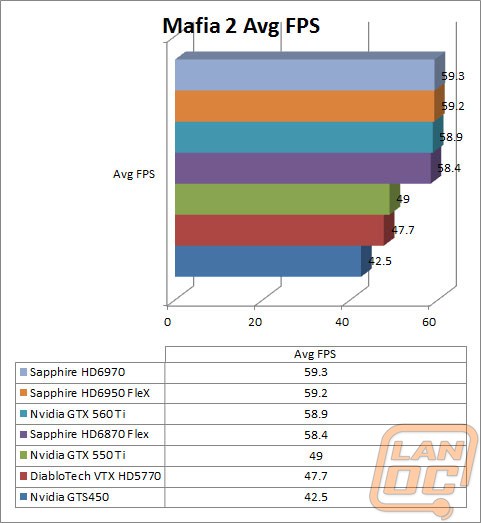 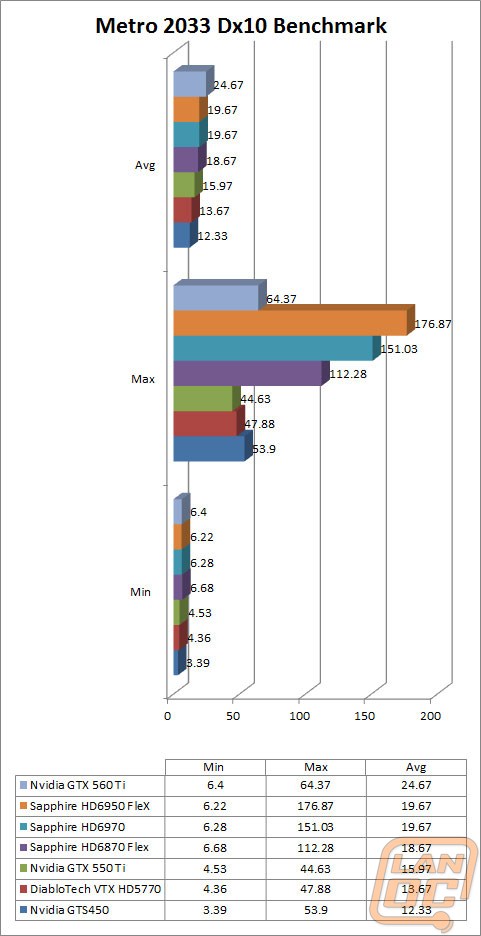 In our synthetic benchmarks I found it interesting that the GTX 560 Ti inched ahead of the HD 6950 in 3DMark Vantage on the performance setting. All of our other tests show a considerable lead for the HD6950 FleX. 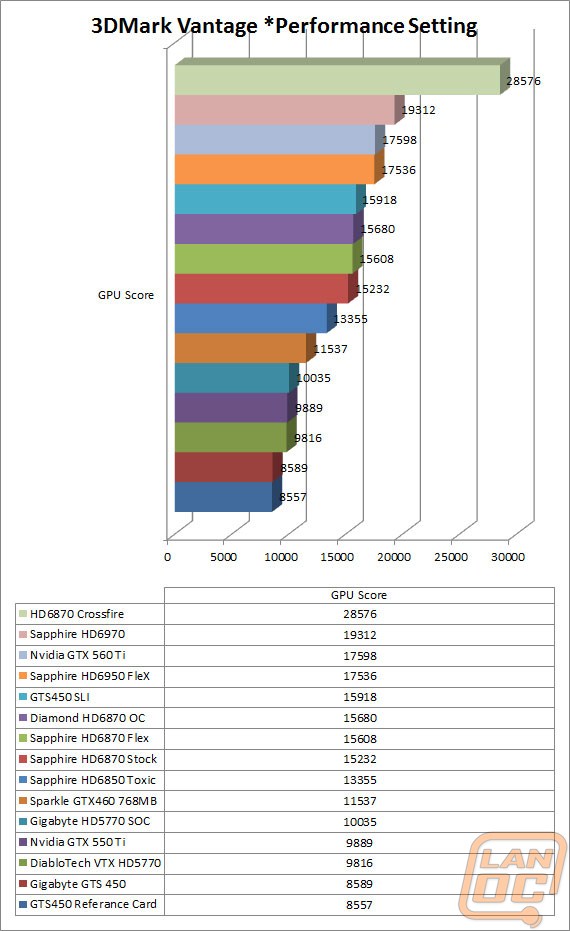 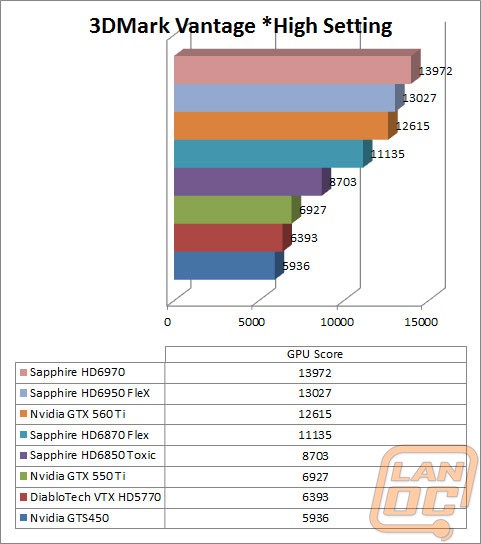 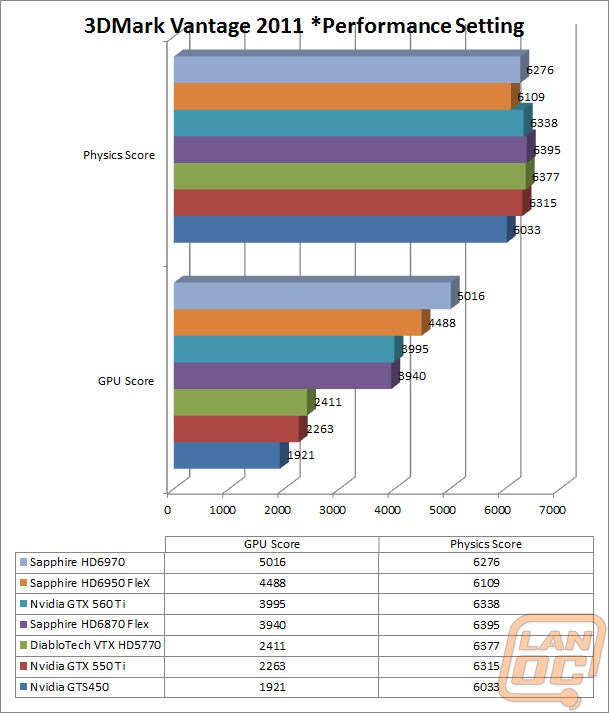 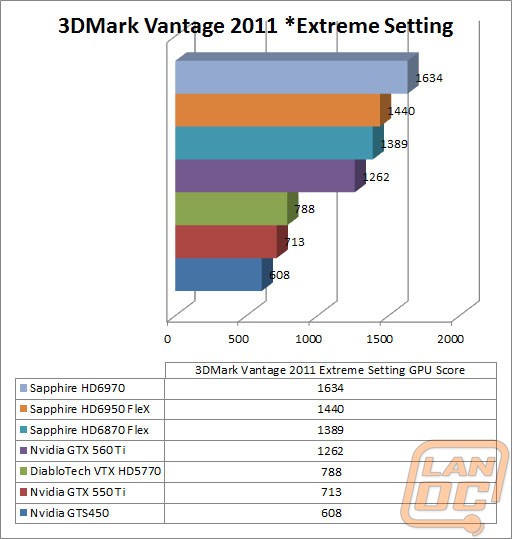 Our in game testing is just as interesting with the HD6950 out performing even the HD6970 in Battlefield Bad Company 2. This is just proof that even though we average our results out over numerous tests changes in the exact line or view by even the slightest bit can affect the results considerably and should be taken with a grain of salt. The same can be said with changes in drivers between tests sometimes. Either way, the HD6950 Flex proved itself to be a great performing card! 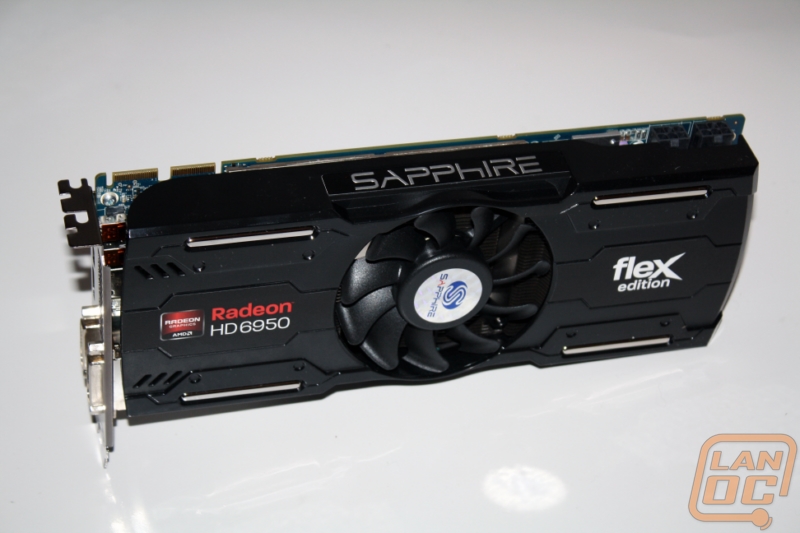 With a price point of around $299 the HD6950 FleX is positioned to be a great deal for someone who wants top level performance without having to empty out their entire bank. The ease of upgrading to Eyefinity along with the added value that not having to buy an active adapter I can once again stand behind their Flex line as a great value in a sea of similar cards. Now that Sapphire has FleX cards in every price range there is no reason your next AMD card shouldn’t be one. Of course if you’re looking to power that high resolution while running the highest settings you really should be looking at this beast! 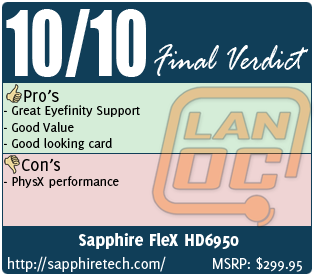 You might call him obsessed or just a hardcore geek. Wes's obsession with gaming hardware and gadgets isn't anything new, he could be found taking things apart even as a child. When not poking around in PC's he can be found playing League of Legends, Awesomenauts, or Civilization 5 or watching a wide variety of TV shows and Movies. A car guy at heart, the same things that draw him into tweaking cars apply when building good looking fast computers. If you are interested in writing for Wes here at LanOC you can reach out to him directly using our contact form.
Discuss this article
Log in to comment
Posts in discussion: Sapphire FleX HD 6950 2Gb

Nacelle replied the topic: #14717 01 Apr 2011 01:12
It's interesting that in Bad Company 2 you got a higher framerate with it than you did with a 6970 which is pretty much the same core with more shaders, has a faster clock, and memory speed. You might want to recheck that one. I don't see how that could be.
Read More...