Earlier this week the rumors of an upcoming AMD video card line was finally confirmed with their HD 6800 series. They will be starting things off with both the HD6870 and HD6850. This time around the x800 cards are AMD’s “sweet spot” cards, with a flagship card to follow. Today we will be taking a look at the HD6870, specifically Diamond Multimedia’s Overclocked version. How will the HD6870 hold up? I can’t contain myself anymore, let’s jump in!

In case you haven’t kept a close eye on tech news recently, you may have missed AMD’s announcement that they would be dropping the ATI moniker and using the AMD brand for both CPU and GPU offerings. The reasons are complex, but it mostly boils down to AMD’s vision of the future of PC’s. With their upcoming Fusion platform, they are planning on merging the GPU and CPU into what they are calling the APU (Accelerated Processing Unit). Mixing the two together could cause some confusion in the market when it’s ready to be released.

Just under a year ago, AMD introduced DirectX 11 compatibility to the world with its 5800 series of cards. Building on that success, they released 11 different models with the 5000 series moniker, all with DirectX 11 compatibility. The HD 6800 Graphics Series is a refined version of that same architecture. Using the same 40nm manufacturing process as before, AMD is boasting 35% more performance per mm² meaning a much more efficient design. A testament to that is the better-than-HD5850 performance on 25% less silicon. The performance gains come from a reconfigured core design, an enhanced tessellation unit, dual rasterizers, 12-14 SIMD engines, and a 256-bit GDDR5 memory interface. Expect a much more indepth writup on the structure of the 6800 series of cards in the upcoming weeks from us! 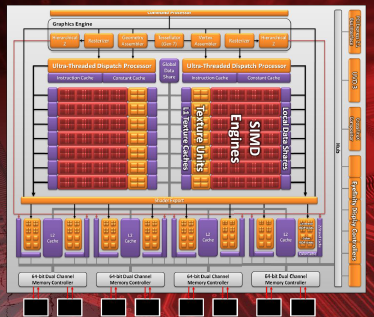 With the inclusion of two DisplayPort 1.2 ports on the 6870, AMD is able to enhance their Eyefinity technology by gaining the ability to hook up multiple displays to each port. This means you can daisy chain monitors together or while using a Multi-Stream Transport you can convert from one DisplayPort 1.2 connection to the connection of your choice (DP, VGA, DVI, and HDMI). Three monitors per connection and two connections make for support of up to six displays! That’s without having to pick up a special Eyefinity Edition this time around. Eyefinity also won’t require two video cards to run, unlike NVidia’s multi-monitor solution, not to mention support for twice as many monitors if you would like them (6).

Diamond has packaged the 6870 with a full-sized background image of the popular military gaming genre. Each corner is occupied with information, including a line of features included on the card and a reference to the AAA title Battlefield Bad Company 2, which compliments the theme of the packaging well. The sides of the box dive further into details complete with schematic drawings of certain features, as well as a bulleted list of specifications. On the back, the card's Eyefinity ability is foreshadowed with an action shot complete with three monitors, accompanied with a few in-depth description of some of the most appealing traits of the 6870.

Opening the box, you'll first be greeted with paperwork and an installation CD resting atop a soft foam. Underneath, the HD 6870 is protected in an anti-static bag. Included as well is the accessories package that holds plenty of converters to take advantage of the plethora of output options. 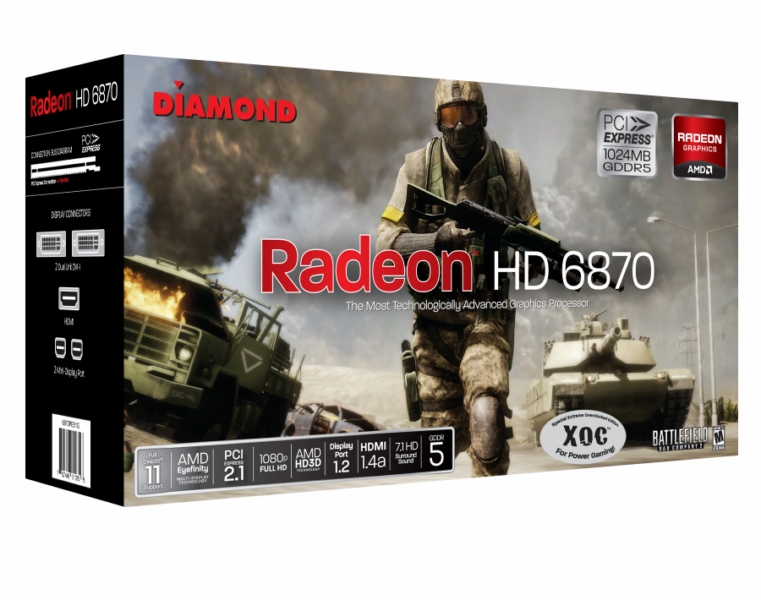 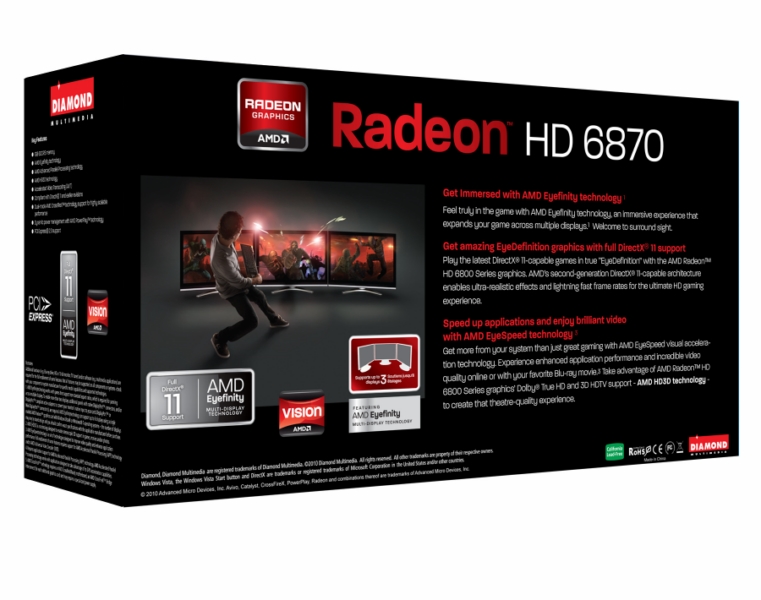 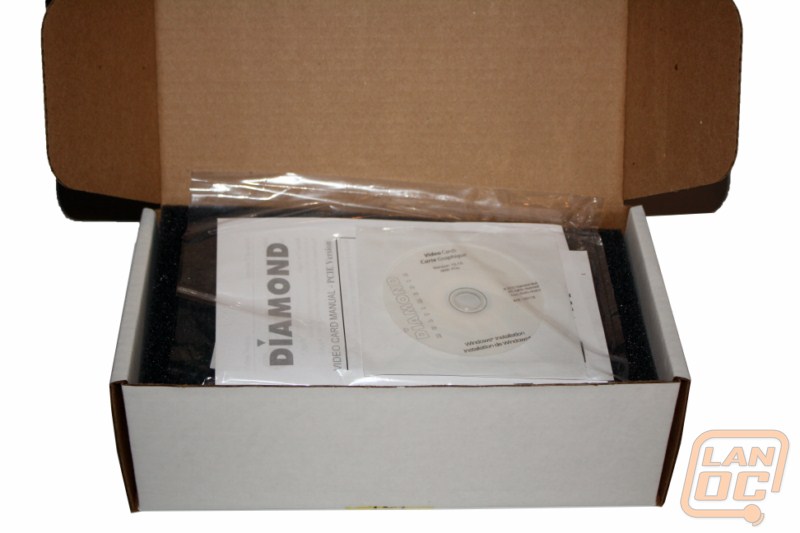 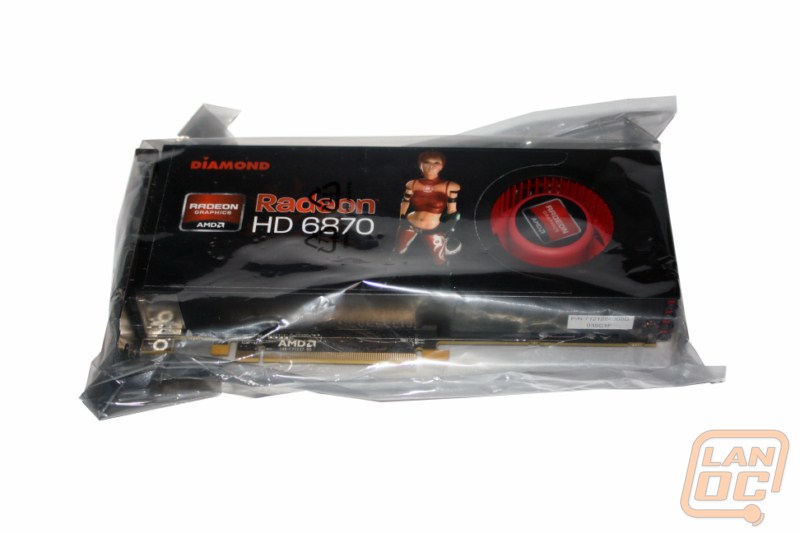 The best part about doing a video card review is, of course, the performance testing. Not only am I excited as you to see the results but it’s also one of the few times I can justify playing video games without my wife giving me the evil eye. I put Diamond's HD6870 through our standard collection of tests including Battlefield Bad Company 2 and 3DMark Vantage. Over the next few weeks we will be revamping our video card testing procedures, expect to see the HD6870 on those tests as we update them. Without further ado, here are our results:

As you can see, the HD6870 doesn’t best the 5870, but the distance between the two isn’t far. Considering the HD6870 will be launching at $239, the card is an amazing value. To counter the expected price and performance of the HD6870, NVidia jumped in and has announced a price drop on their cards. Without a 470 to test the HD6870 against, I can’t compare the two, but they are currently the closest in price. With that being said I was able to compare it against the 460 and a pair of 450’s in SLI. Although the 450’s in SLI performed well in 3dMark Vantage, in BattleField Bad Company 2 it was no contest.

The card that Diamond sent to me was slightly overclocked, running at 940Mhz for the core speed and 1100Mhz on the memory clock; this is just a small bump over the 900Mhz core and 1050Mhz memory clock that AMD’s reference card is spec'd at. We will see how much or little that overclock will boost performance when we do our 2nd write up and crossfire comparison later today.

Outside of the cards graphical performance I was impressed with the reference cooling design. During my testing not once did I hear the card over top of the Cooler Master v6 that we used to cool our CPU. The v6 isn’t a loud cooler, the HD6870 just put out less noise. Not only is it quiet but it kept our card cool even through the most demanding benchmarks. Part of that is due to the more efficient design of the chipset, but the heatsink played its part as well.

All of this performance would make you think that the HD6870 is going to be a power hog, but due to the refinements in the design it does surprisingly well. The card's power draw with load comes in at a very respectable 151 watts, much better than the 188 watts that a 5870 requires at load. At idle the 6870 barely registers with only 19 watts! This is perfect for those of us who like to keep our rig running all of the time but don’t want to throw our money down the drain on a high electric bill.

*With the pictures below, it should be noted that this is not the sticker the card will ship with. This is a mock up that was used to get the card out to us in time. Expect it to be of a much higher quality 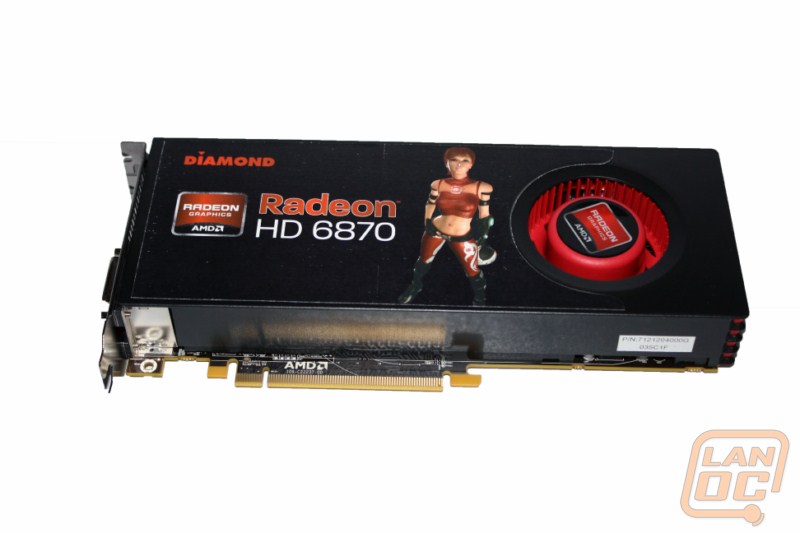 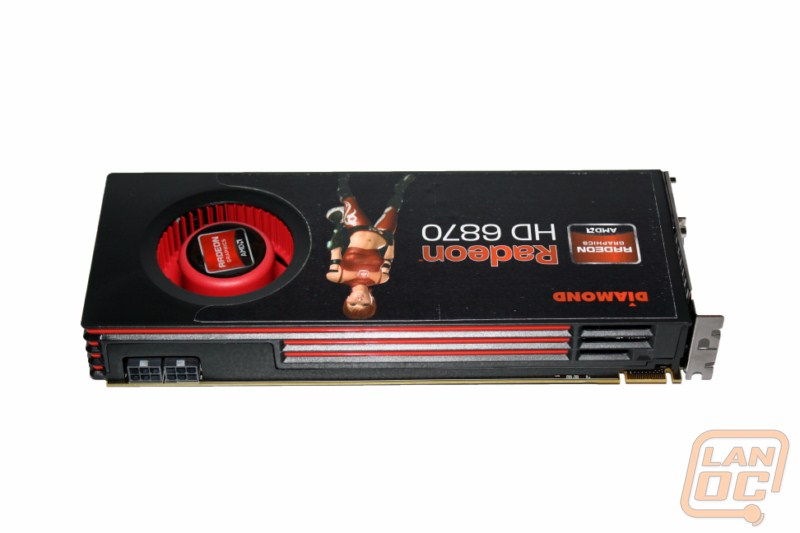 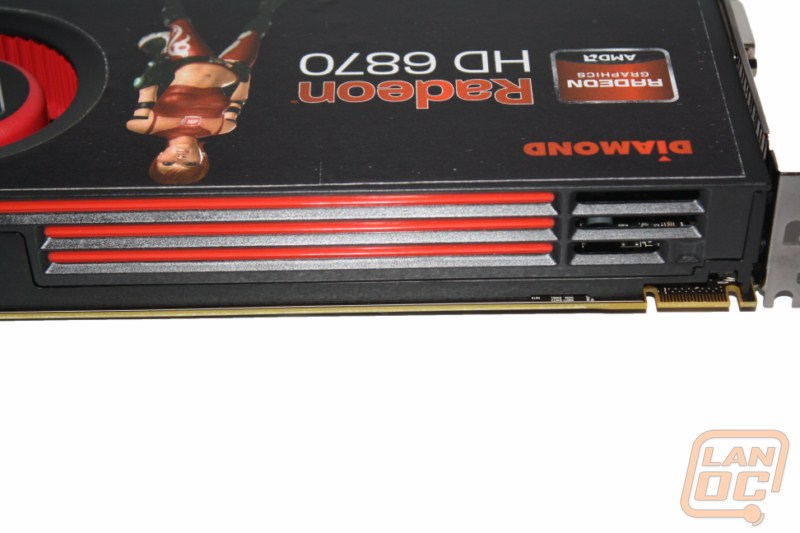 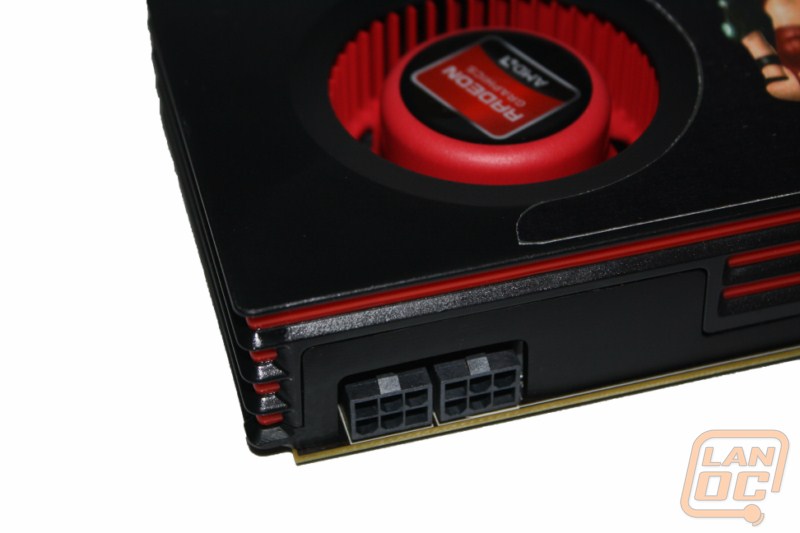 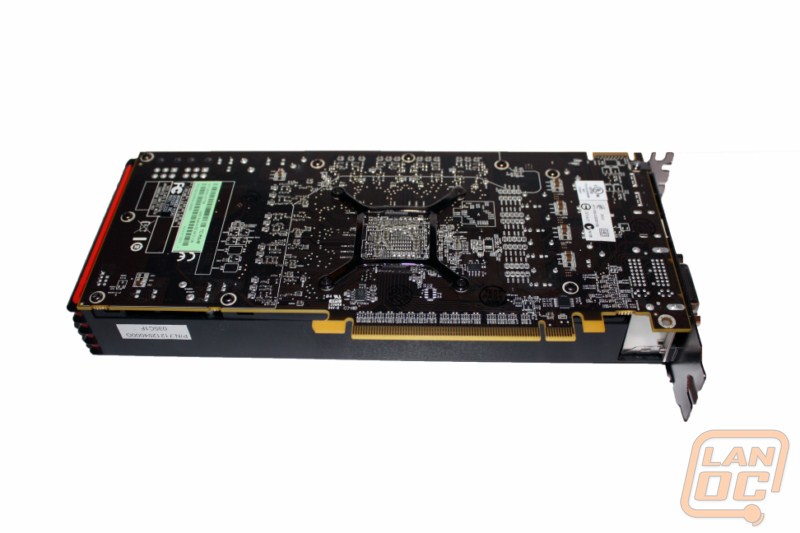 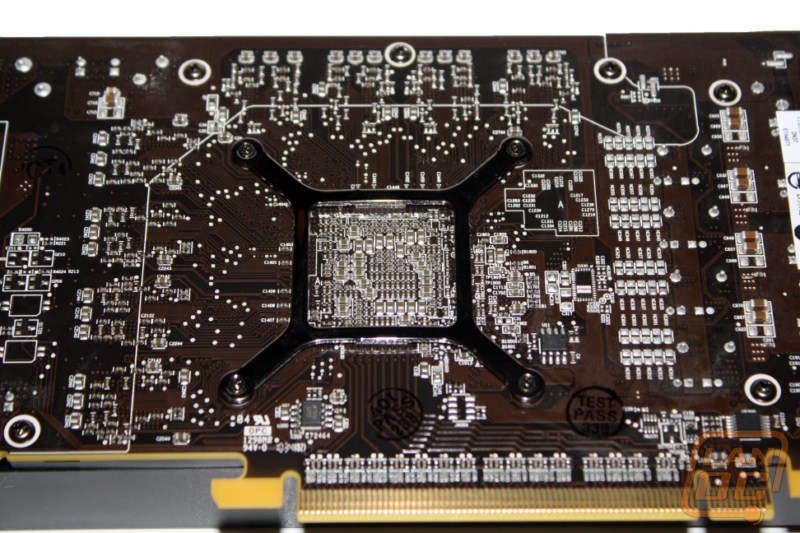 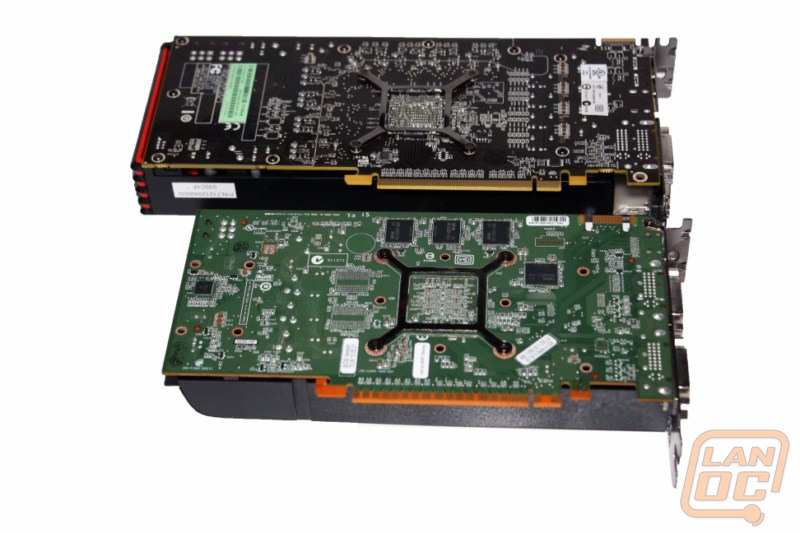 So after all the excitement of the new launch wears off, will we still be interested in the 6870? I have no doubt in my mind! With its high efficiency design, low power requirements, and great performance, its positioned to be a go-to card for a lot of gamers. With it being priced at just under $230 I expect to see a lot of people considering this card as an upgrade from their 4870’s and 280’s. Things are only going to be more interesting from here, AMD has proven that they have a good platform to base next years cards on, and they will be very competitive priced to boot. If this is what a sweet spot card can do, I can’t wait to see the top dog! 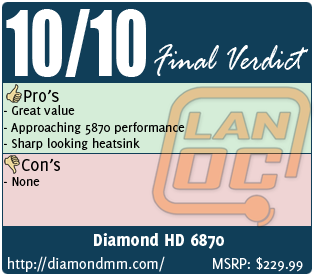 You might call him obsessed or just a hardcore geek. Wes's obsession with gaming hardware and gadgets isn't anything new, he could be found taking things apart even as a child. When not poking around in PC's he can be found playing League of Legends, Awesomenauts, or Civilization 5 or watching a wide variety of TV shows and Movies. A car guy at heart, the same things that draw him into tweaking cars apply when building good looking fast computers. If you are interested in writing for Wes here at LanOC you can reach out to him directly using our contact form.
Discuss this article
Log in to comment
Posts in discussion: Diamond Multimedia HD 6870

We have 967 guests and one member online