With internal Blu-Ray players starting to become normal and prices becoming very reasonable it’s no surprise that Plextor would look at other options to continue to grow their product line. They have had an external Blu-Ray drive for some time, but it would be hard to call it portable. With the introduction of the PX-B120U they could finally call their external Blu-Ray drive portable. Just like the PX-610U it doesn’t require external power making it much easier to take with you on the go. Let’s take a look and see if the PX-B120U is as portable as it looks. 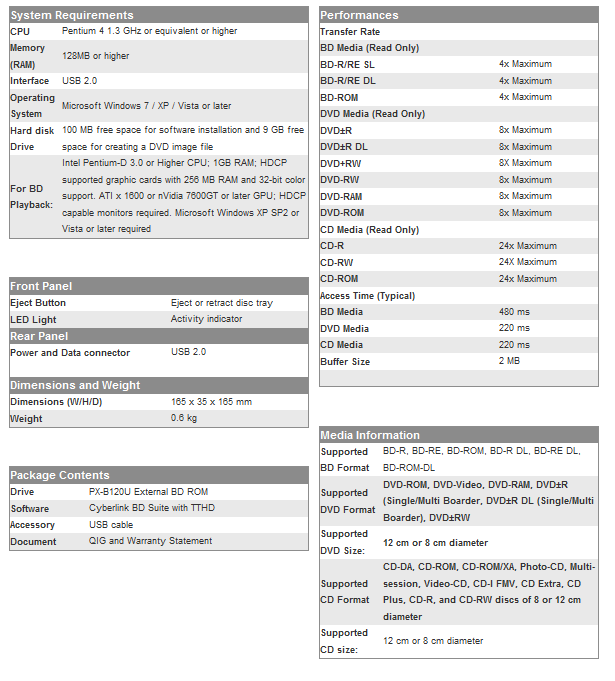 Plextor packaged the PX-B120U in box similar to what we are used to seeing from them minus one detail. Rather than stick with their normal white box this time around the packaging has a blue fade on it. You still have a nice photo of the drive itself on the front along with all of the important information right on the front for you to see and compare. Specifically the Blu-ray read and DVD Read speeds along with the drive being USB powered. They even went out of the way to point out that it does not use a power brick or second USB connection for power, obviously this is an important feature. Around back there isn’t much to be seen outside of a photo of the drive open and a short description in multiple languages. 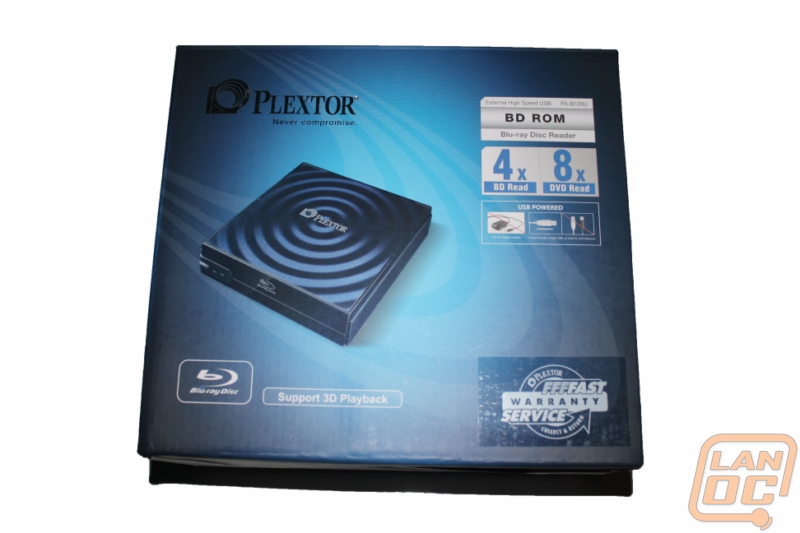 Inside the drive is wrapped up in a protective film and box in a recycled paper shell. To go with it you will find the warranty paperwork, a safety notice, the manual, software, microfiber cleaning cloth, and usb cable. 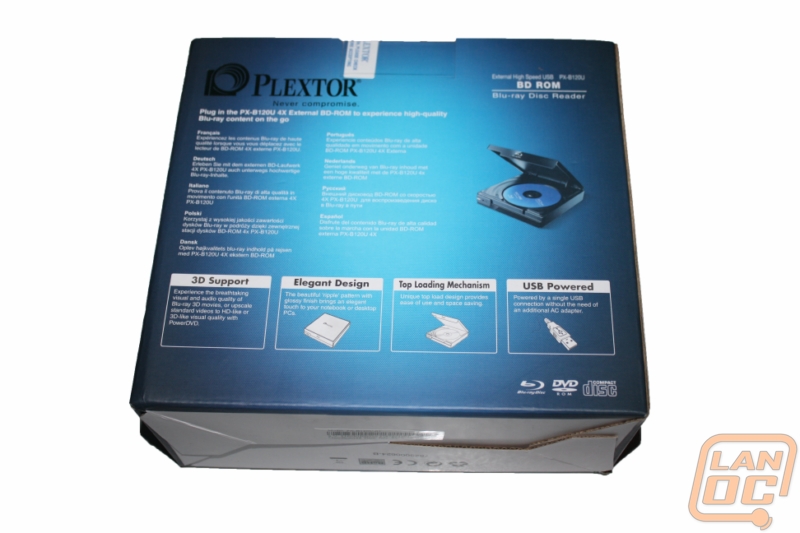 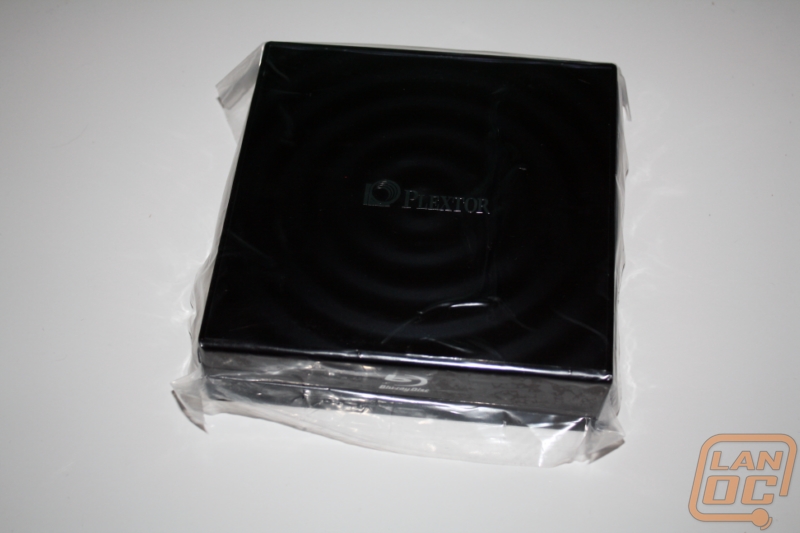 Installing the PX-B120U couldn’t get much easier really. Without the need for a power cable or multiple USB connections for power means you only need to plug in the one USB cable and install the software. Even without the software you can have it up and running in no time by just plugging it in. Perfect if you have a few PC’s around the house without a disc drive or in this case if you would like to watch a Blu-Ray on your laptop but don’t have a built in drive. 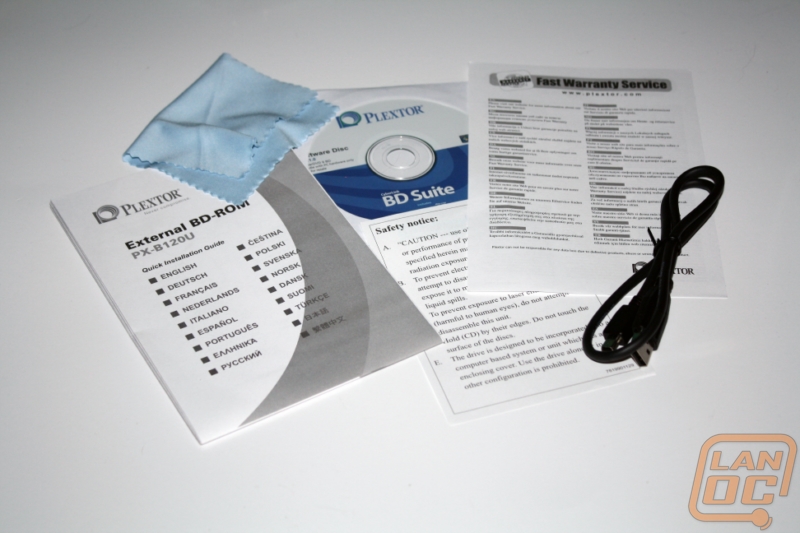 Plextor has always been great about bundling all of the software needed to get the best functionality out of their product. This is where they stand above their competition. With the PX-B120U the situation was no different. They bundled Cyberlink’s PowerDVD utility with Blu-Ray capabilities with the drive this time around. Unlike some Blu-Ray drives, you won’t have to worry about not having the software to play everything. In fact, if you have the capabilities to watch 3D movies on your PC or laptop you can even use the included software to play 3D Blu-Ray’s.

With the PX-B120U being a portable Blu-Ray drive I of course wanted to test its portability out. To do this I packed it up with my laptop to use on a few trips and packed in a few of my favorite Blu-Rays (Hangover and Goodfellas). Having used Plextor’s 610u DVD drive with my netbook in the past the B120U didn’t feel as portable. Given that it’s a Blu-Ray drive over a DVD drive this is understandable. When compared to the next best option (a 5 ¼ disc drive in an external enclosure) the B120U is actually much smaller. Where the drive really stands out is the lack of need for external power. This made plugging it in and watching a movie simple when on the go. When traveling power outlets can be limited or in some cases nonexistent. Being able to laugh at my favorite scenes from Hangover while being untethered from the wall is a big plus. 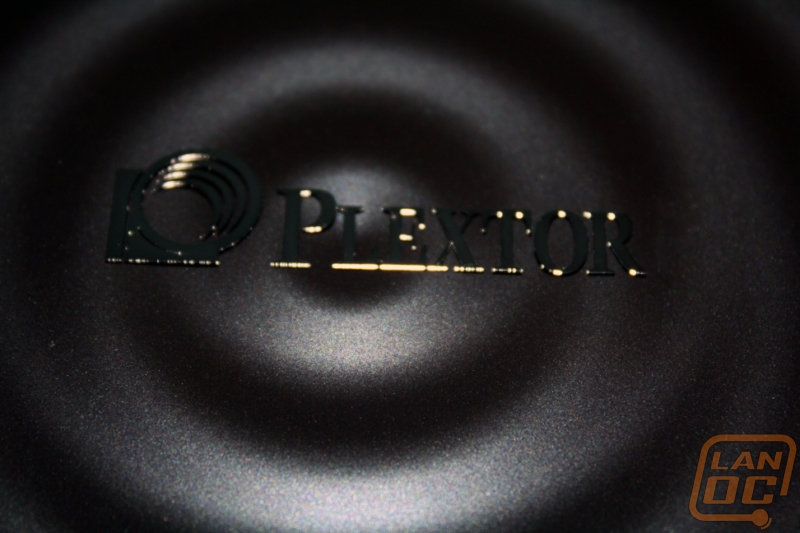 My only complaint about the usability of the B120u is the top loading nature of the device. When you press the eject button on the front the entire top opens up to reveal your disc. I would much rather see a front loading design or even a slot loader. This is my preference and it really doesn’t affect the performance of the device. The top loading just seems a little more cumbersome. 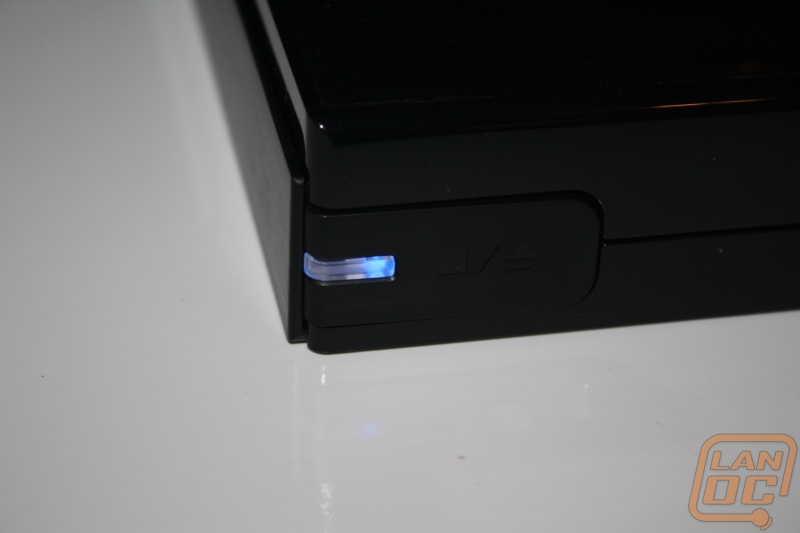 Recently Plextor announced that the B120U will also be able to be attached to their upcoming Media Box to change it from a set top streaming device into an all in one media center for your television. I hope we will be able to test this device out when it comes out, the idea of being able to detach my Blu-Ray player and take it with me on trips sounds quite appealing. 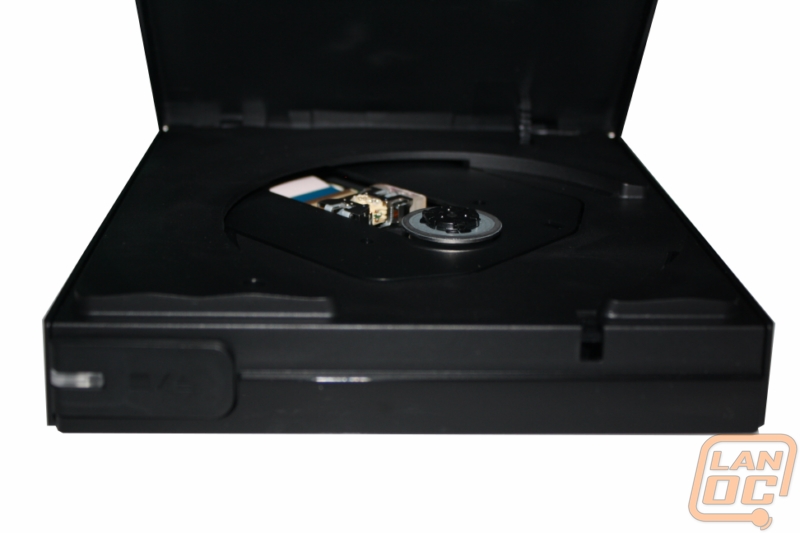 Benchmarking the drive using Sandra’s benchmark utility I hoped to finally be able to truly put the B120U to the test. After fussing with their benchmark for entirely too long I was not able to get a benchmark of the Blu-Ray performance, a feature their software advertises. I was however able to get a benchmark of the DVD performance. I didn’t expect much with the USB 2.0 interface and limited drive speed. Sandra’s utility tested the DVD performance at 3.9x. With an advertised speed of 8x DVD read I did a little more research and found that Sandra’s utility does normally show considerably slower than manufacture results. I’m sure that is amplified by the USB 2.0 interface. With that being said, in all of my testing I was always pleased with the performance of the drive. I used it multiple times to install windows onto test rigs without disc drives without any speed issues. In this case I think this is proof that synthetic benchmarks are only part of the picture, real world testing is key. 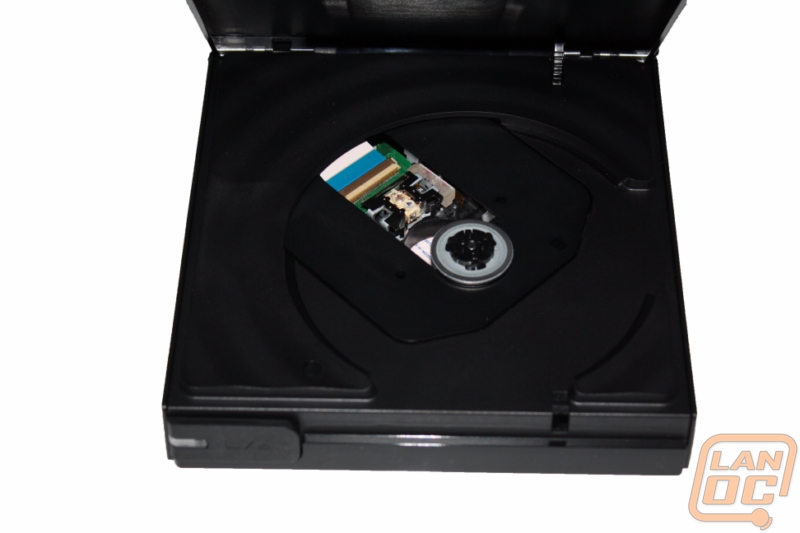 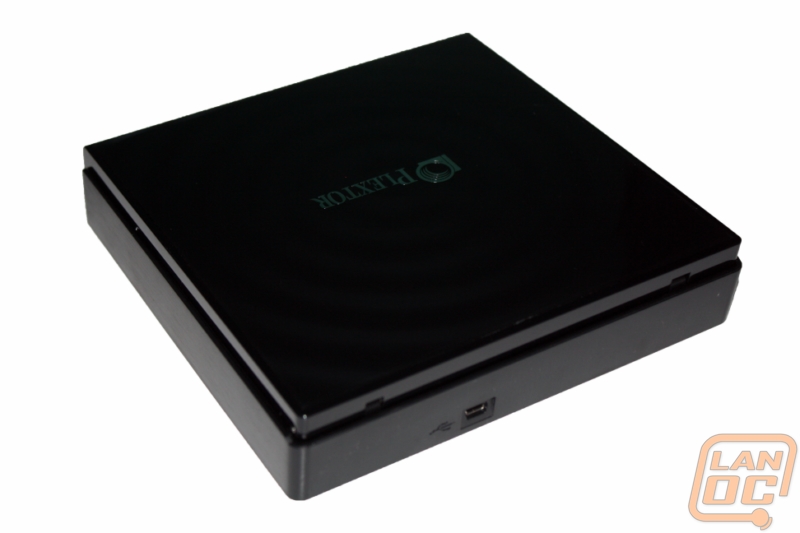 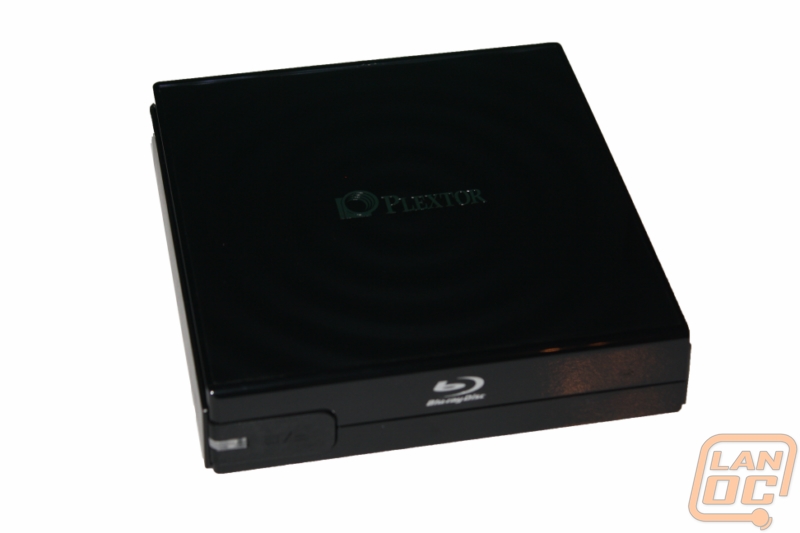 As I said before, even without installing the software you can have the PX-B120U up and running in no time by just plugging it in. Perfect if you have a few PC’s around the house without a disc drive and you need to install software or even an entire OS. Another option in this case if you would like to watch a Blu-Ray on your laptop but don’t have a built in drive. You can pack it with you on trips and still enjoy your HD films on the go. The 610u DVD drive that we tested before was considerably smaller and more portable causing me to be a little spoiled, because of that the B120u did seem a little large. But the 610u didn’t play Blu-Ray’s. You next best option is going to be a standard 5 ¼ inch drive in an external enclosure making it considerably bigger than the B120u. Without a need for external power this drive really can be used by anyone, anywhere, how many hardware components can you say that about? Plextor as always included everything you could need in their software pack to get you up and watching you favorite Blu-Ray in almost no time. 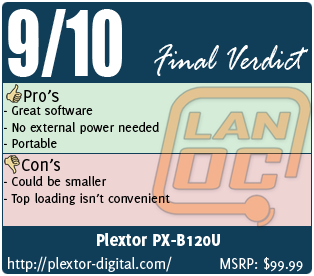 You might call him obsessed or just a hardcore geek. Wes's obsession with gaming hardware and gadgets isn't anything new, he could be found taking things apart even as a child. When not poking around in PC's he can be found playing League of Legends, Awesomenauts, or Civilization 5 or watching a wide variety of TV shows and Movies. A car guy at heart, the same things that draw him into tweaking cars apply when building good looking fast computers. If you are interested in writing for Wes here at LanOC you can reach out to him directly using our contact form.
Discuss this article
Log in to comment
Posts in discussion: Plextor PX-B120U