With hard drive capacities continuing to grow and the popularity of Blu-Ray movies also growing the demand for Blu-Ray players and burners will continue to rise therefore driving the price down. Today I have the chance to take a look at the first Blu-Ray burner to come into LanOC Reviews, the PX940SA from Plextor. With a 12x Blu-Ray burn speed it should be quick, but will it be fast? 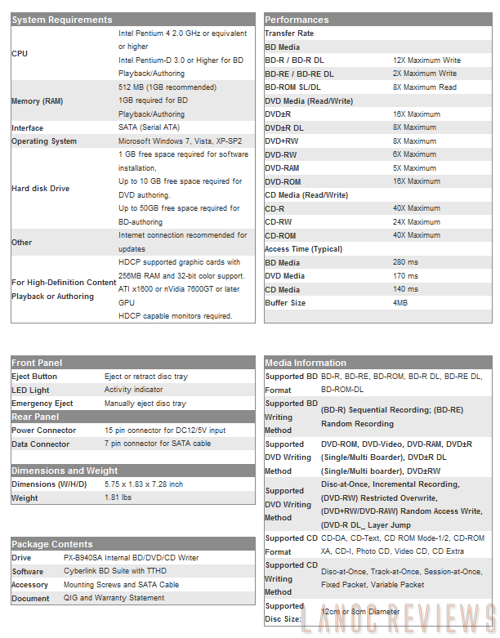 Although they have the PX940SA packed in a box similar to other drives this time around it's a little more colorful. The front has a good picture of the drive itself and in large numbers they have both the DVD and Blu-Ray write speeds. Around back, you will find anything else that you will need to know. They included a listing of system requirements, specifications, and a list of everything included in the box. 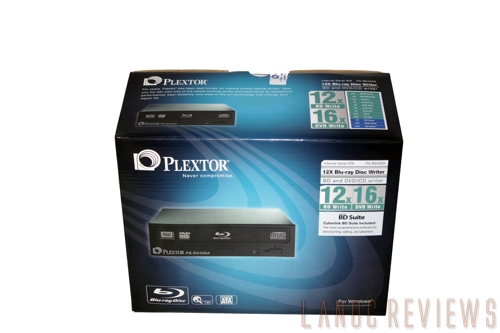 Where the PXB940SA really shines as with all other Plextor drives is their software. They included the full CyberLink Blu-ray Disc Suite that includes everything you could do with a disc from editing and authoring it to even desiging the cover. This is the attention to detail that makes Plextor stand out in a crowded market. My only complaint with all of the software was with powerdirector not accepting the file format that the HD flip records in (MPEG4), of course they could support it if I pay to upgrade to the newest version. But I guess you can't complain when you are getting a nice software suit along with a great drive with no extra charges. 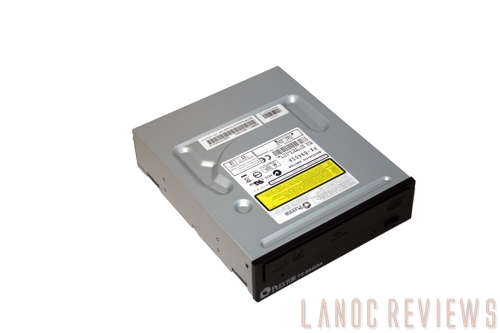 In order to get an idea of the PXB940SA’s performance I had to pick up a couple blank Blu Ray discs online along with the CDs and DVDs I already had sitting around. I was expecting the price of a Blu-Ray disc to be outrageous but at under three dollars for a single disc the was more affordable than I had expected. Of course, that price is far from low enough to make the average customer pick them up.

During my testing of the PX940SA was dead silent much the Plextor drives we have reviewed in the past. Not only was the 25GB single layer that I tested large enough to back up a significant  amount of documents and photos, it also burnt the disc quickly (considering the amount of data 11 minutes isn’t bad). No matter the disc type you have minimal vibration meaning low noise levels. Reading around the Internet I did find that a few people have had issues with the drive failing, but I had no such troubles during my testing. 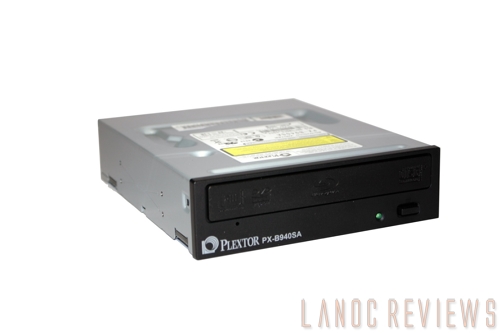 Really it’s hard to even compare the PXV940SA to anything; it is one of the fastest drives on the market. Coming from Plextor I have no doubts about its quality or noise level. I was a little disappointed that the drive didn’t have the stylish front plate that we have seen on previous Plextor drives but it does match the front of my black case. The only thing holding up seeing Blu-Ray burners in more PCs is the price of blank discs; they are going down in price but not quickly enough. If you’re looking to have the high capacity back up ability that a 25GB or 50GB disc will get you than you are looking at one of the quickest yet quietest drives on the market. 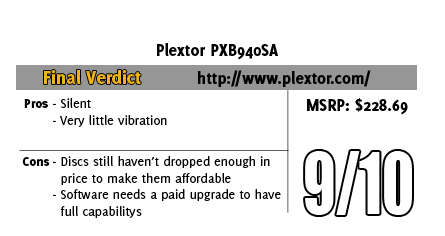 You might call him obsessed or just a hardcore geek. Wes's obsession with gaming hardware and gadgets isn't anything new, he could be found taking things apart even as a child. When not poking around in PC's he can be found playing League of Legends, Awesomenauts, or Civilization 5 or watching a wide variety of TV shows and Movies. A car guy at heart, the same things that draw him into tweaking cars apply when building good looking fast computers. If you are interested in writing for Wes here at LanOC you can reach out to him directly using our contact form.
Discuss this article
Log in to comment
Posts in discussion: Plextor PXB940SA