Immersing oneself seems to be the popular idea these days in the gaming industry, with 3-D and motion control climbing their way onto every platform. Debatable as they may be, they only aim to improve upon the senses already used in gaming. TN Games has taken a different approach, to introduce something new to your game: the ability to react depending on what you feel physically, with the Tactile Gaming Vest. Scary? Perhaps, especially when your editor volunteers you to try it out while he uses a rapid fire Barret Sniper Rifle.
Product Name: Tactile Gaming Vest

The Tactile Gaming Vest is a physical piece of clothing equipped with air-pressurized 'buttons' in various positions that indicate where the user is being shot. Using the air compressor, the corresponding areas protrude into the user's body gently, but with enough force to be noticeable. The idea is that by using the sense of touch, players can gain an advantage. How well does it work, and does it actually give gamers and upper-hand? Lucky for you, LanOC Reviews has survived the testing to share the results. 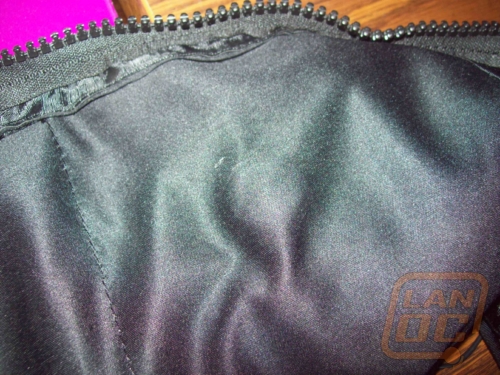 Packaging
TN Games has designed the containing box with somewhat of a military theme in mind, a forest green background accompanying a strip in the center depicting a visual representation of what the vest does. This image shows a man wearing the vest in real life and an impact point on the vest he's wearing, with a PC screen in-front mirroring the man in-game and getting shot. A triangle cut-out in the corner of the box reveals a glimpse of the actual material of the vest inside. 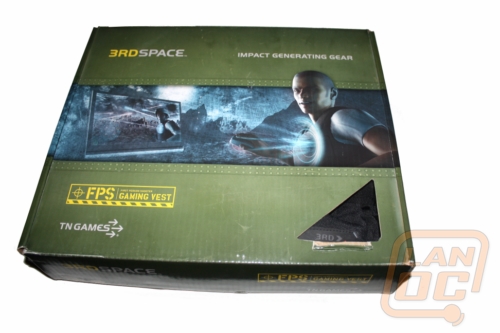 On the back, a callout list of features using an image of the vest can be found, as well as a description. Listed below you'll find fine-printed specifications and requirements, as well as an ESRB rating for the included copy of Call of Duty 2. 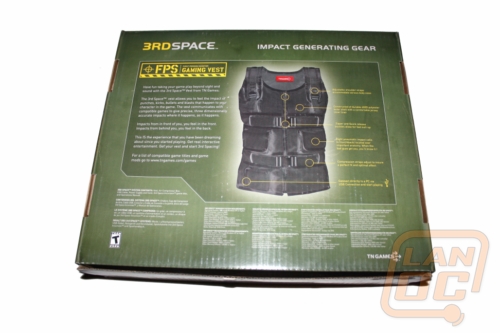 As you open the box, you'll be greeted by that generous piece of software, resting on top of the vest itself. Underneath, you'll find the air compressor and USB cable. 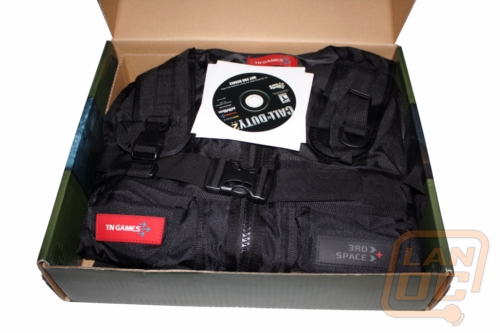 Set-Up
Preparing the vest for use takes a bit of effort. As with most peripherals, you have both hardware and software to manage. Let's begin with getting the vest set-up. You'll notice an installed tube running from the front-right side of the garment, leading to a connector that will be attached to the air compressor. Since you're working with compressed air, the connection utilizes a pressure sealing tip to prevent leaks. 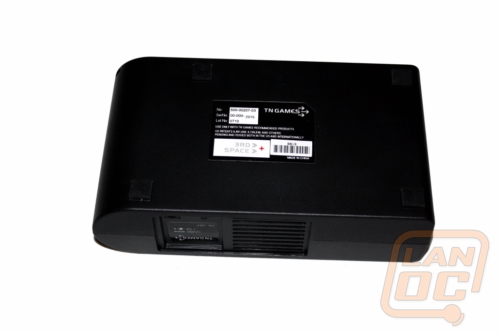 The compressor needs a power source, which is simply going to be a wall outlet. USB isn't going to get left out, however; you'll still need to connect the vest itself via an open port with the included cable. Once everything is connected, you'll find yourself playing limbo with a plethora of cords, if you hooked it up while not wearing the vest. The fit can be adjusted in four vital areas: a strap on each shoulder, and two rows running along the rib/abdomen. The length can be extended or shortened to achieve the best fit, using the classic bookbag strap mechanisms to allow more or less slack. Fork-clips are then used to lock the vest together on the body.

The air compressor needs to be switched to 'on' to work, an obvious step but none-the-less important. You'll appreciate the option to kill the power without unplugging the power supply as well, but that will be discussed more in the Performance section of this review. 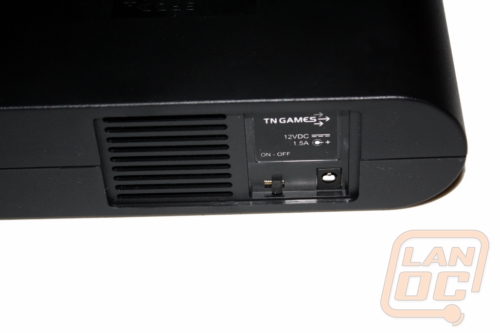 Though downloading the most up-to-date drivers from the companies' website is always the best route to take, I like to try installing from what is included with the product. As mentioned above, you'll notice two discs: the 3rd Space driver disc, and Call of Duty 2.

While installing the drivers, a second included free game makes it's appearance. 3rd Space Incursion is a first-person shooter developed by TN Games that at first glance resembles Unreal Tournament 2004. It has low requirement graphics and focus' on gunplay. 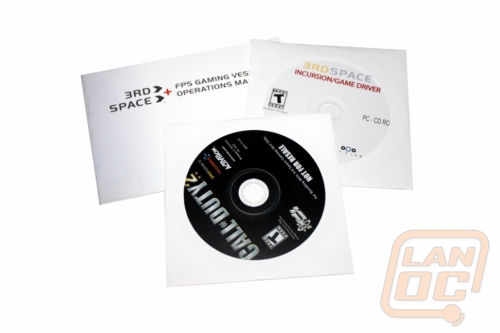 Performance
The concept of utilizing an additional sense in order to gain a competitive edge is great, but there's a fine line between an actual performance increase and it just being a novelty item. The gaming industry has seen a lot of this recently, between innovations such as 3-D displays and motion controls. While all three are an entertaining experience, just as I'd never choose to play Call of Duty competitively on the Wii, I don't think I'd ever wear this vest into the firefight, either.

Perhaps that isn't the most accurate analogy, since a gamer isn't losing control, functionality, or sacrificing graphics, only gaining that additional sense. So what does it hurt to have it on, in case it actual does by chance help? In my experience with the vest, it just didn't function accurately enough to provide any sort of aid. When shot in the front, I would feel buttons protrude all over the vest. Good to have if you can somehow ignore the red blur visually indicating you've been shot on your screen, but otherwise a distraction. Especially when first using the vest, I focused more on what it would feel like, being extra cautious not be shot, and therefore my usual performance suffered. After using it for a while, that new feeling does wear off, but without accuracy of being shot in the side, or the back, or otherwise, it does no more good than what you already have at your disposal.

For instance if you get shot in the side, it's somewhat random where it responds to. Front, back, side... sometimes all. It's just not accurate. A good example is also a grenade, which was planted right in front of me. Sometimes the whole vest would respond, which kinda makes sense, and sometimes just one trigger would respond, which kinda doesn't. Its that sort of inconsistency that prevents this from becoming anything more than something neat to try once or twice.

Adding that extra depth of sense isn't free, either. Aside from its price-point, the vest takes quite a bit of effort to set-up. Oh, and the air compressor is rediculously loud. It sounds like a smaller lawn mower, and kicks in and out. This is even more ironic, considering how much time and money many computer users spend on making their systems quiet. Not to mention you're now restriced by two cords, and wearing an extra piece of thick clothing. When I sweat the way it is during Search and Destroy, the idea of a heavy garment isn't my idea of comfortability. Oh, and I just got jabbed in the side as the last man standing. Great.

Overall
Being somewhat of a competitive gamer, I was definitely looking for actual performance advantages, and in the end was a little disappointed. However, don't let that sway your opinion too much; the TN Games Tactile Gaming Vest is an innovative idea, and a fun experience. The nature of the product also provides a great opportunity for future development and support, so perhaps one day I'll be able to whip around and fire back at that sniper because of a compressed air button in my side. Today however, I'm pwned. 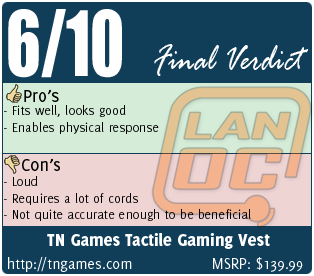 Author: Lersar
Contributing Editor / Event Staff
Adam is a big proponent of LAN parties, esports and speed-running, and helps organize our semi-annual LAN events. He has covered hardware and software reviews of a wide variety, but most content these days come from event coverage, such as other LAN parties.
Discuss this article
Log in to comment
Posts in discussion: TN Games Tactile Gaming Vest

We have 1150 guests and no members online