What If I told you that you could pick up a 23 inch monitor today for less than 160 bucks? A lot of people including one of our staff would jump right on that. Of course, no matter what the price it won’t make any difference if it’s sporting dead pixels. That’s why today I will be taking a closer look at one of these hot deals, I’m sure you have already ordered yours so you can read about my experience with it while you wait for it to come in the mail.

With this being a de-branded product, the packaging obviously lacks any kind of branding on it. That also means you miss out on all of the marketing fud you find on most packaging. You end up with a picture of the monitor, recycling, RoHS,  and energy star logos. Everything you need and nothing you don’t. Inside, the monitor was tucked away in foam. The stand is attached to the monitor even while packaged, something you don’t normally see. Under the foam the monitor was inside of a plastic bag and to prevent scratches it also had a protective coating over the bezel around the monitor. 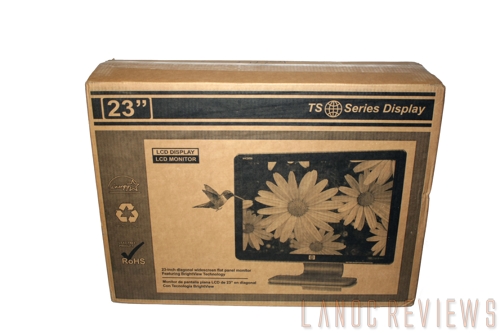 What a better way to test out a monitor that I hoped to use at LAN parties than to pack it up and get together with our staff for a little gaming. With Cory, Adam, and Don (sorry Tim, Ethernet won’t stretch to Canada) setup and ready to play,  everyone was impressed with the De-Branded 23’ monitor’s built in stand, making it easy and quick to setup. The stand also has the side effect of giving you a nice place to store your keyboard when you’re not using it. I found it odd that the monitor had an HDMI input but no DVI. Instead you’re left with the option to go full HDMI or old school VGA. There is also an audio input if you need to put the integrated speakers to use. 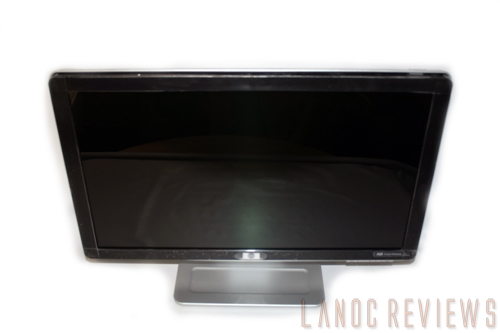 The monitor has 5 control buttons; four on the front for menu control and a back-lit power button up top. After finding an HDMI cable to use because there isn’t one included I had everything powered up and ready for some gaming with the guys. Right away I was impressed with the even backlighting and a crisp picture. The full 1920 x 1080 resolution looks amazing on the 23 inch screen. I was surprised when I joined my first game and I heard sounds coming from the monitor. Even though I knew it had an audio input. It’s hard to remember that this monitor has speakers considering the lack of any obvious speakers on the front. Not to mention, I didn’t have anything hooked up to the audio input just HDMI with built in audio on the video card). Every game I played looked amazing on the monitor, including darker games like Call of Duty: Modern Warfare 1 and 2 and the original Left 4 Dead. 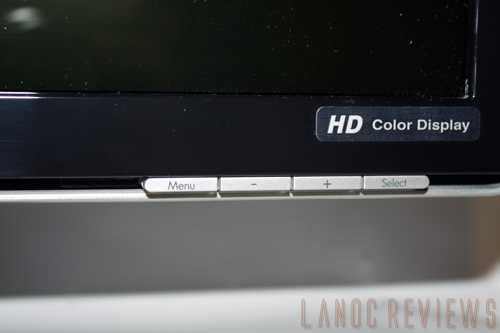 The 5ms refresh rate means you don’t have to worry about any ghosting issues while in game. Where this monitor really shines is its ability to be used with anything that uses HDMI. The 1080p resolution makes this a perfect candidate for playing a PS3 or Xbox 360 on your desk. You could even hook up a Blu-Ray player and  watch a few movies. Speaking of movies, Blu-Ray’s look great on this thing! You are packing the same resolution onto the screen that you would normally have with a much larger television, making the picture very crisp. 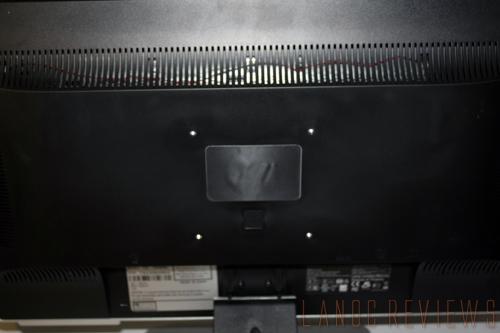 A quick note about how this monitor is De-Branded. On the front they placed a large sticker over the area the original manufacture placed their sticker. Under it there is no original sticker but you can see the indent where it would go. The interesting part is on the back there is a large black sticker that seemed a little out of place. Under the sticker is yet another sticker, taking this one finally shows the reason for the odd sticker placement, an HP logo molded into the casing. Not that it wasn't obvious before but that does prove that this is just a de-branded HP W2338h, a monitor that costs just under 100 bucks more in most stores. 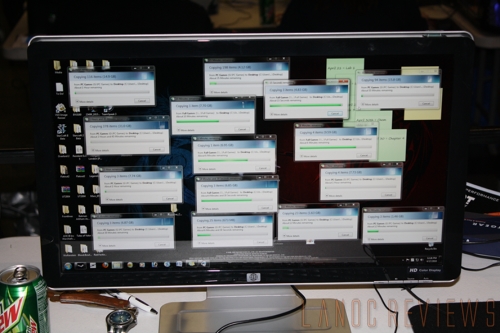 I was interested in this monitor specifically to take to LAN parties. My 28 inch monitor can be a little large and difficult to work with; at 23inches this de-branded HP monitor could be portable without losing resolution. With the price being so low I was expecting to deal with an issue or two. When it came in I was surprised by the lack of issues and impressed with the overall quality. The only issue I had was the paint on the top being rubbed a little thin and how often do you even look at the top of your monitor? I think the only real question to ask is how many of these should you pick up, at this price an Eyefinity setup is within reach for most people! 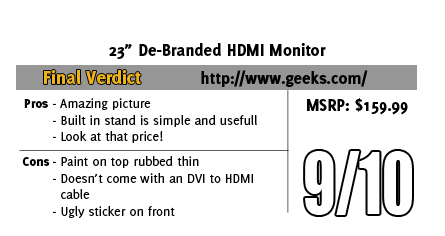 You might call him obsessed or just a hardcore geek. Wes's obsession with gaming hardware and gadgets isn't anything new, he could be found taking things apart even as a child. When not poking around in PC's he can be found playing League of Legends, Awesomenauts, or Civilization 5 or watching a wide variety of TV shows and Movies. A car guy at heart, the same things that draw him into tweaking cars apply when building good looking fast computers. If you are interested in writing for Wes here at LanOC you can reach out to him directly using our contact form.
Discuss this article
Log in to comment
Posts in discussion: 23” De-Branded HDMI Monitor