Prior to the latest entry in Thermaltake's notebook cooling line, widescreen users were capped at a restrictive 15". That limit is expanded to 17" with their latest line, the massive 23cm fan (get it?) occupying half of the total surface area of models. With a CPU cooler from the same company keeping my main rig's temperatures down and a hungry widescreen gaming laptop, I'm anxious to put this new product to the test. Today, Thermaltake has provided us with a sample to do just that.

Packaging
Even with a quick glance its obvious this is a Thermaltake product, if not given away by the sun-shaped logo then by the subtle red and black banner in the corner. A large image of the cooler dominates the front of the container, with a few details callouts scattered about, including the annoucement of official hardware for the World Cyber Games. Instead of a solid color background is a metal texture that similar to the surface material of the Massive 23. On the reverse side you'll find a more elaborate mix of specifications in several languages, accompanied with thumbnail shots of the key features. Opening the package briefcase-style reveals the cooler secured between two foam cushions, accessory bag resting on top. You won't find many extras inside, but this also means little additional installation. 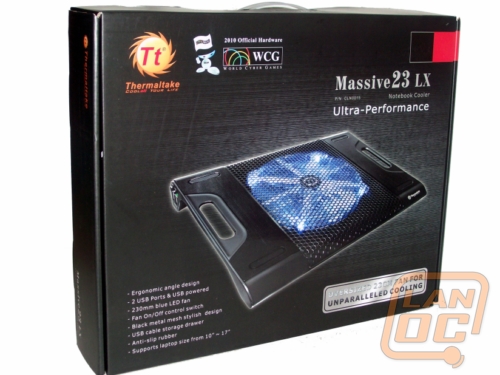 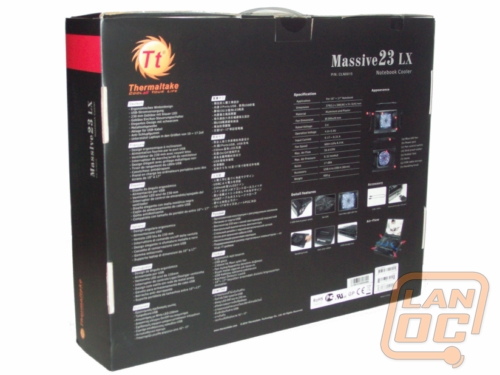 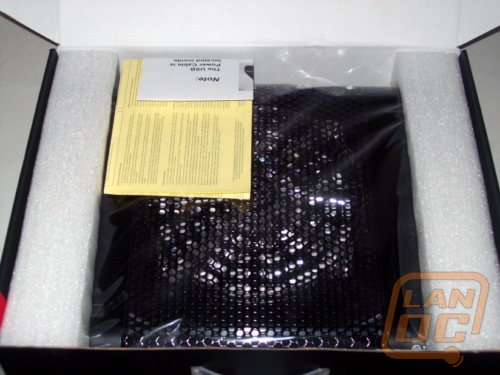 Set-Up
Speaking of which, setting up the Massive 23 is a minor task. Simply position the laptop atop the cooler, connect the included USB cable, hit the power button, and viola. There are a few adjustment options, such as turning on and off the LED glow, and... well, powering the fan itself on and off as well. 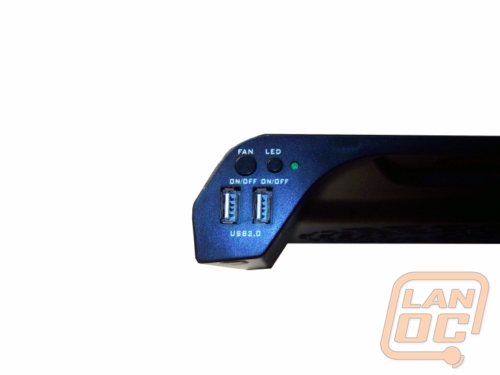 Performance
Thermaltake has included many of the features that have become standard with notebook coolers, but have focused on keeping the price-point down. Though finer details such as a pass-through USB connector or a fan controller, there is a USB 2.0 hub that awards you with an extra port. The better portion of the Massive 23 is occupied with vents, and the overall weight of the cooler is fairly light, just under two pounds.The carrying handles on either side are a nice touch, which can be used to transport while the notebook is attached, assuming your confident in your gracefulness. Thermaltake has also utilized the ever-favorite incline design to improve ergonomics. Finally, to help prevent unwanted shifting, rubber grips and feet are found on both sides of the cooler. 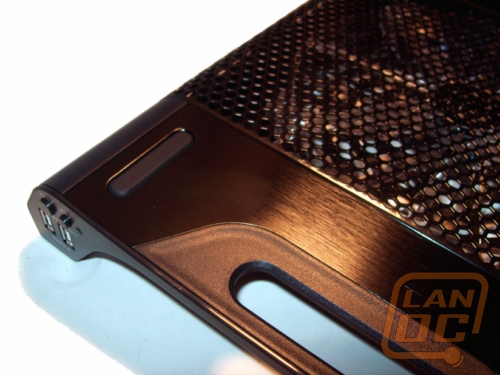 USB-powered notebook coolers are undoubtfully the most convenient, I can count on one hand the number of models I've reviewed that support an AC power option, and even less that include it standard. Another consistency exists among these USB-powered coolers, however: my ability to lose that damn cord. Too often have I found myself using coolers merely as stands to keep the heat of the table at LANs just because I forgot the cable. I find relief in the idea that a designer at Thermaltake has shared this frustration, as the Massive 23 includes a nice hidden cable compartment to ensure you don't leave the USB cord at home. 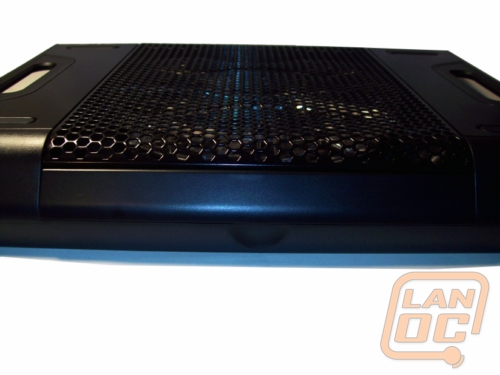 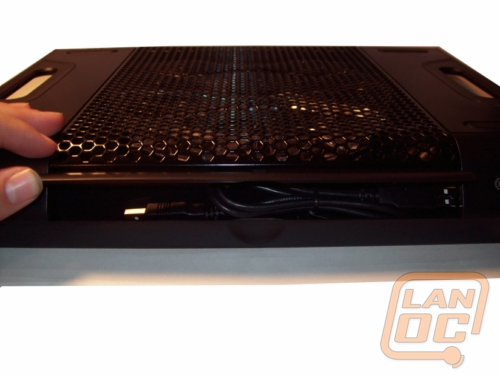 Handy as that may be, it only does good if the cooling it powers is effective. 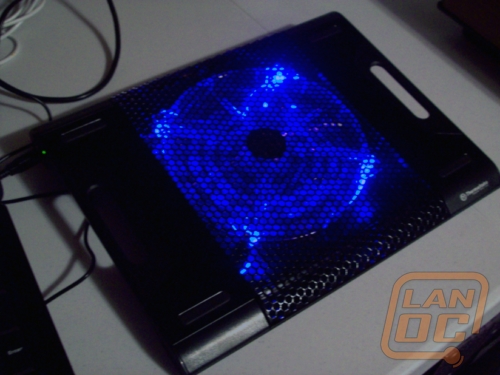 The Massive 23 was put to the test using our standard stress simulating, achieved by loading the system to 100% using Prime95 and Rthdribl (for graphics stressing). The testing is conducted in a maintained environment temperature of 69 degrees Farenheit, with temperatures monitored and recorded using RealTemp 2.5 for comparison to competiting models' results. 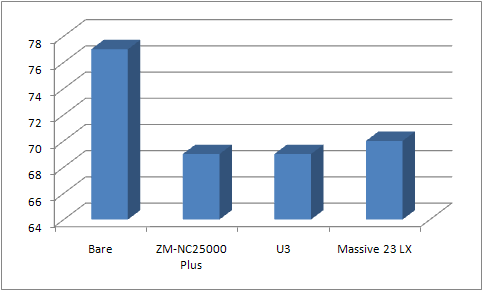 Thermaltake's latest cooler managed to bring temperatures down seven degrees, only a hair over similar competing models. Of the three coolers compared, the Massive 23 also achieves the lowest price point by about $5. Testing also revealed that temperatures peaked at 73 degrees Farneheit before leveling off at the solid 70 degree mark in which it finished with.

Overall
Thermaltake's Massive 23 achieves the balance between price and performance, a feat difficult especially when dealing with widescreen notebooks. The massive fan reduces temperature effectively, while gaining the silence benefit by using the larger diameter form. Despite it's low price-point, Thermaltake hasn't ignored the little features that make higher-end models so popular, such as the USB hub and the cable compartment. The aluminum material not only helps with heat dissipation, but also cuts down the overall weight of the cooler, improving the portability aspect, which is really hit home with the carrying handles built into the deck. The Massive 23 is a great option for users looking to cut degrees on their build while holding on to enthusiast features (did I mention the blue LED?). 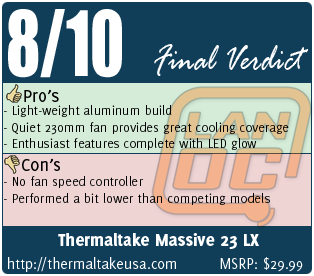 Author: Lersar
Contributing Editor / Event Staff
Adam is a big proponent of LAN parties, esports and speed-running, and helps organize our semi-annual LAN events. He has covered hardware and software reviews of a wide variety, but most content these days come from event coverage, such as other LAN parties.
Discuss this article
Log in to comment
Posts in discussion: Thermaltake Massive 23 LX

jedimasterlego replied the topic: #27425 23 Aug 2012 02:50
Hi. I'm hunting for a laptop-cooler for my brand-new laptop (it's this one www.asus.com/Commercial_Notebooks/P43_Series/P43E/ ), and I read your reviews on the Cooler Master Notepal X2 and the Thermaltake Massive 23LX, and being a geek, I know that both Thermaltake and Cooler Master are great companies specializing in cooling-products for computers (and that happens to be one of their specialties: cooling-products for computers and computer-components), and I know that therefore either of these two laptop-coolers will work [just fine and/or perfectly] for my laptop. However I'm curious (seeing as though I haven't had the opportunity to see either one of these two products face-to-face, and/or try them out (none of my friends or the people I know have any one of them), and therefore know how they perform [when seeing them "face-to-face"], etc.): which of these two products would you find better to use for my new Asus laptop (link above), the Cooler Master Notepal X2, or the Thermaltake Massive 23LX?

We have 1141 guests and one member online