Appearance has become a large part of any PC gaming enthusiast's rig, with more and more chassis coming with windowed sides standard in order to to show off  your hardware. This addition is yet another decision to factor into the buying process. Thermaltake has a large line of CPU coolers, many with a unique design and performance. My favorite has always been the SpinQ line and today I sit down with the new SpinQ VT to see how it performs, in both the eye of the user and the processor.

Packaging
The VT is packaged in a sharp black and red themed box to match the color scheme of the cooler itself. On the front is an action shot of the heatsink, and on any given side is chosen specifications and details of the cooler's performance. 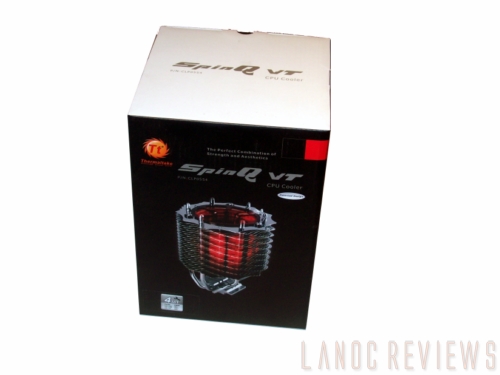 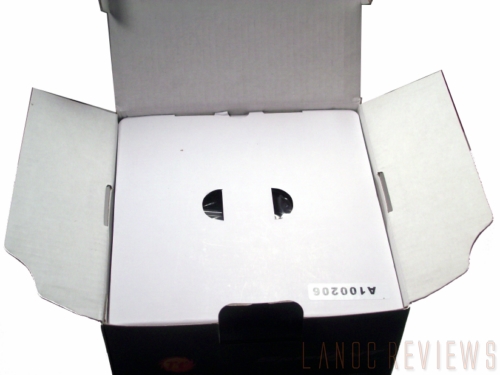 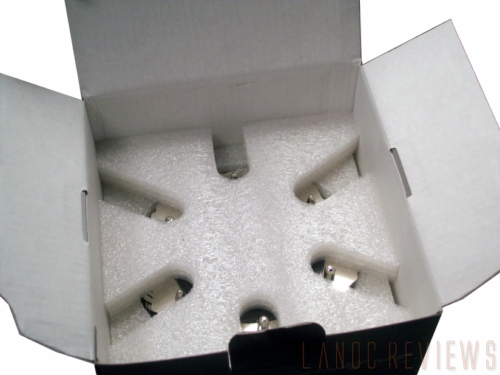 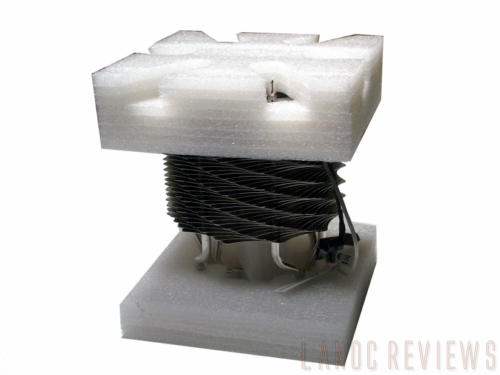 Inside, you're first greeted with a removable cardboard box, which not only acts as a placeholder for the VT but also holds the accessories inside. Underneath, the cooler is padded with foam form-fitting it's unique design to keep it safe during whatever travel it may undergo. The heatsink removes as one piece, with another foam section guarding the bottom as well.

Inside the box of accessories, you'll find the bracket clips supporting sockets LGA 1366 and 1156, as well as thermal paste and mounting screws for bracket assembly. A warranty reference sheet is also included. 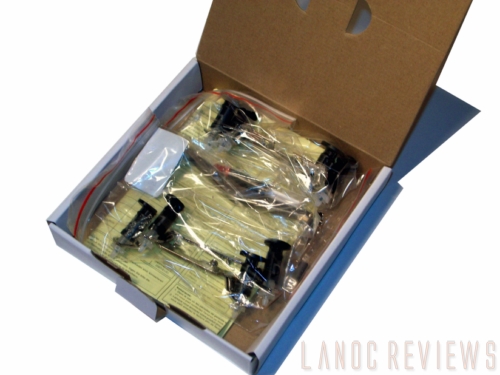 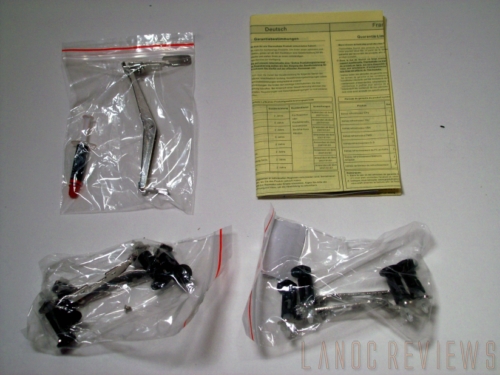 Installation
The SpinQ VT is a very simple installation, since no backplate is required. This cuts out the necessity of removing the motherboard from an installed case without a cutout, which happened to be my situation. 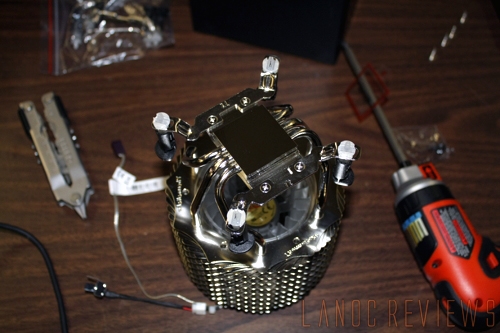 In our case, we are using the LGA 1156, which is a push-pin installation bracket. Most of the effort of installation is in mounting the brackets to the base of the cooler, which only takes a matter of minutes. Be sure to remove the film on the copper base before installing.

Thermal paste is included if you need it coming in a common syringe-style applicator. It's a somewhat small tube and enough for maybe one or two applications, depending on how liberal you are with grease.

Once applied, the VT is lined up with the holes on the motherboard and each corner of the brackets is pushed in securely meaning until an audible click is heard. Connect the power cable to the board and viola! 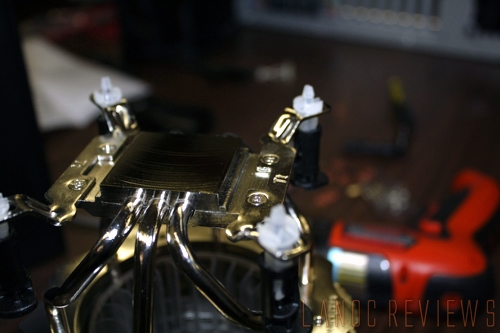 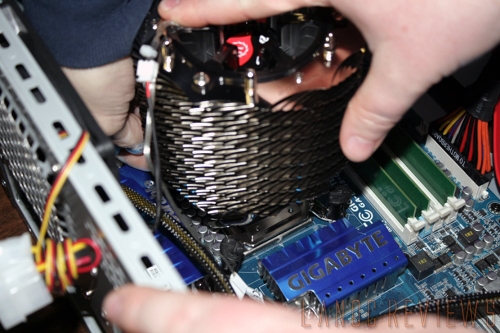 Performance
When compared to the original SpinQ, you'll notice only a few differences. Both are compatible with the same sockets, and the VT has only slightly larger dimensions than the original. The VT is made of copper fins as opposed to the SpinQ's aluminum, and features both copper and aluminum in the base. By using a combination of the two materials, Thermaltake achieves the best of both worlds between dissipation and absorption of heat and manages to cut down the weight by over 150g. The rest of the specifications between the two are identical except the change in LED fan color. The VT's MSRP is also $20 cheaper than the original.

The VT, as mentioned features the use of copper heat pipes which are filled with a liquid that has a low boiling point thus allowing them to remove heat at even the slightest difference in temperature. The use of the pipes also aids in the reduction of weight and allows for a quick transfer of heat away from the CPU. The fins which are strategically positioned near case fans in order to help remove the heat from the chassis as well.

As with the original SpinQ, the VT comes with a fan knob to adjust the RPM of the 80mm fan which features a maximum airflow of 86.5CFM and pressure of 2.22mmH20. The 'ruby' red LED gives the VT a nice glow, both in the top of the cooler and the light emitted between the fins and the bottom alike.

For testing, the room temperature is kept at a steady 69 degrees Fahrenheit. Prime95 is then ran for a duration of an hour to put the system under stress, and the temperature is recorded using RealTemp 2.5. 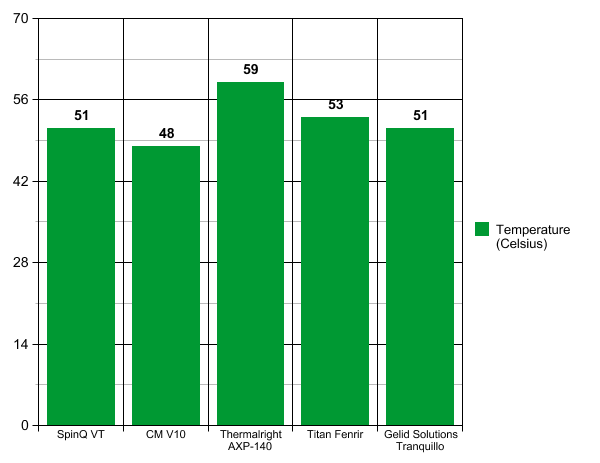 As you can see, the SpinQ VT competes extremely well in cooling the CPU, both in load and idle temps. The rating of the VT is just a few degrees higher than the colossal Cooler Master V10, which is nearly twice the price. The cooling is also notable, given that the cooler is very silent while doing its job.

Overall
The SpinQ VT first and foremost looks great, which is a tremendous asset especially for those enthusiasts looking for a cooling solution to show off. Installation is very simple, and even saved this reviewer the trouble of removing the entire motherboard due to the lack of a CPU cut-out in the test case, since no rear bracket is needed. As for the most important aspect, the actual cooling of the CPU the VT performed superbly not only against its fellow lower priced competitors', but also within a few coolers almost twice the VT's price. Thermaltake has created a great cooler here, succeeding in every category a user could hope for. 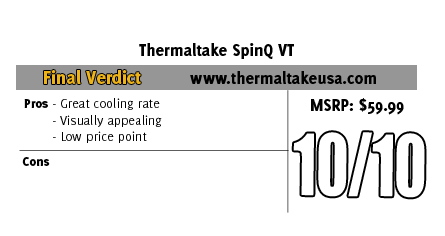 Author: Lersar
Contributing Editor / Event Staff
Adam is a big proponent of LAN parties, esports and speed-running, and helps organize our semi-annual LAN events. He has covered hardware and software reviews of a wide variety, but most content these days come from event coverage, such as other LAN parties.
Discuss this article
Log in to comment
Posts in discussion: Thermaltake SpinQ VT