With video card technology growing consistently for some time now today’s video cards have grown into large power hungry monsters, some requiring 300w of power. With that amount of power being used they are bound to create a lot of heat in the whole possess. Reference designs from both ATI and Nvidia have heatsinks with fans that are sometimes very loud while not cooling to the extreme that some enthusiasts expect. That’s where Thermalright jumps in with their T-Rad?, designed to cool better than the stock design while (when using the right fans) keeping the noise to a minimum. 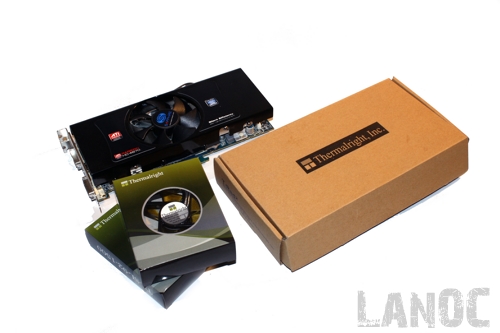 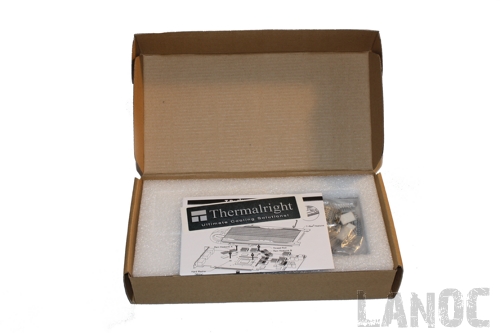 In the past Thermalright has been known for bland basic brown cardboard boxes with the product name on it. Recently they have been releasing products with packages that are a little more up to date. The TRad we tested came in their older style cardboard box. Nothing on the outside is flashy and you won’t find pictures or anything to distract you. In fact other than their name and the product name you won’t find much of anything on the packaging. Inside the heatsink is protected from damage with Styrofoam around it. Inside you will find all of the screws and parts you may need along with instructions and a Thermalright sticker. 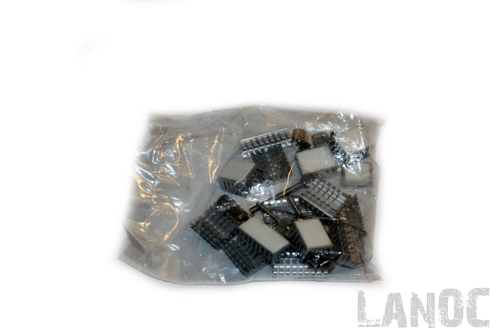 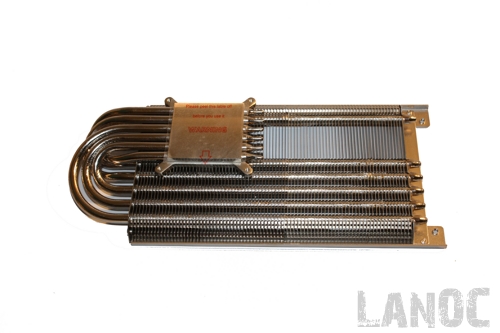 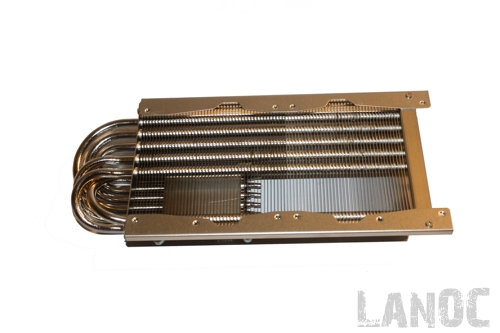 Installing the Trad2 started with removing the stock heatsink and cleaning everything up. To remove the stock heatsink you have to remove a few screws and fight with a couple plastic push in locks. After getting the heatsink off I used the two step ArctiClean provided to us by AcousticPC. With everything cleaned I started attaching the small ramsinks, if you don't have everything cleaned perfectly before installing the ramsinks you will not get them to stick. Once all of the ramsinks are installed you put your thermal paste on the GPU and install the thumbscrews onto the heatsink and slide the heatsink onto the card. Next you installed rubber washers and use the tooless thumbscrew bolts included with the TRad to tighten the heatsink down. All that is left to do now is install ether a 120mm fan or two 92mm fans. Thermaltake provided us with two of their 92mm fans, but if you buy the TRad you will need to pick up your own. The trick to installing them is having a screwdriver skinny enough to slide through the top fan holes to reach the screws. Overall the TRad 2's installation went smoothly, no broken parts or cut fingers. The instructions Thermalright provides are adequate enough to get the job done, but I would love to see more detailed pictures. 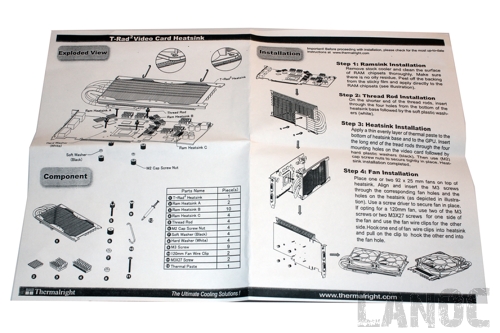 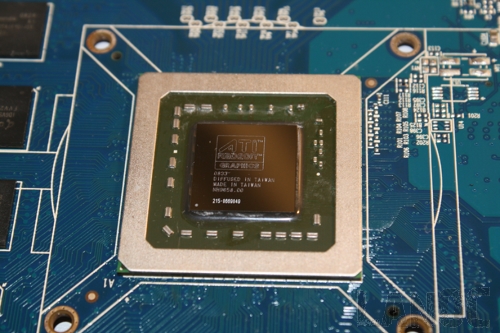 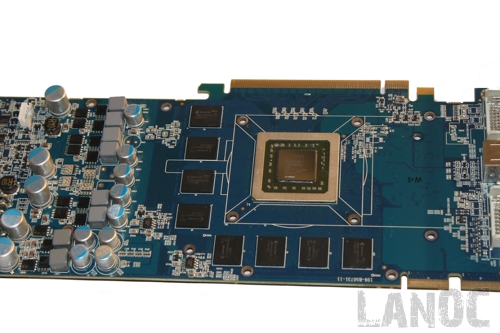 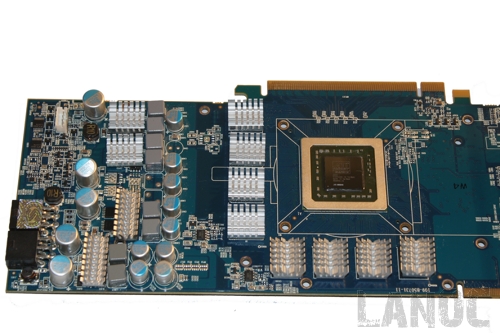 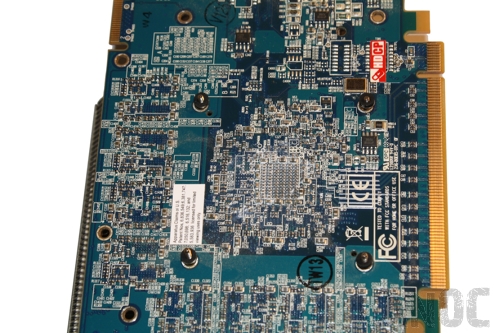 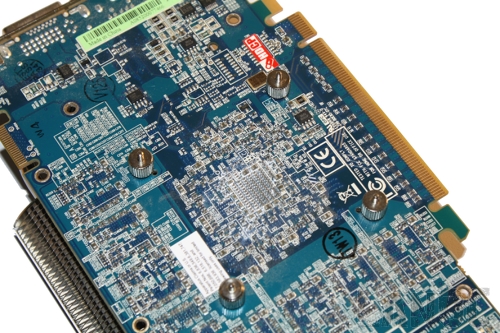 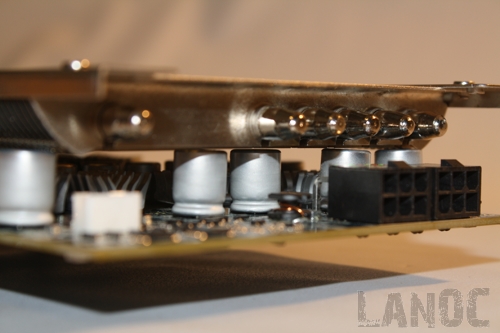 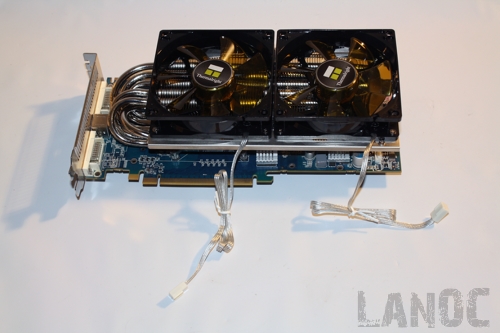 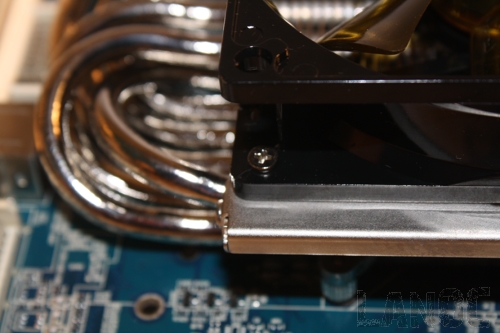 Testing for the TRad consisted of heating the video card up using 3D Mark Vantage and monitoring the temperatures with GPUz. The room was at 73 Degrees Fahrenheit during all of our testing.

The numbers really speak for themselves. A 25 Degree drop under load is crazy! The most impressive part is the TRad2 with two fans was still much quieter than the stock heatsink on auto, with the stock at 100% I couldn't hear anything other than the fans I wouldn't really consider that a viable option for most people. 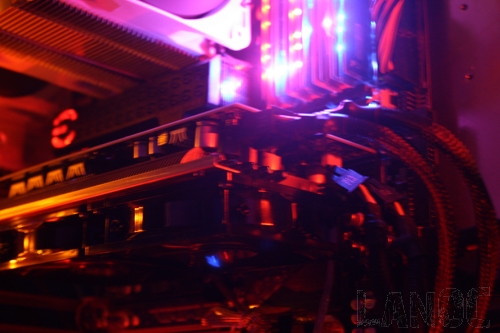 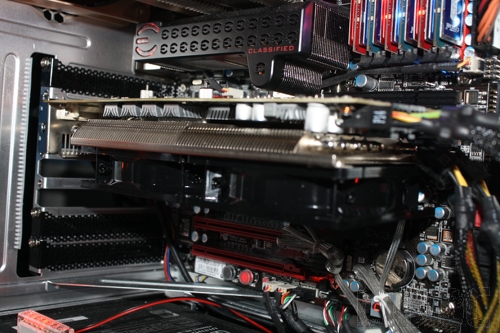 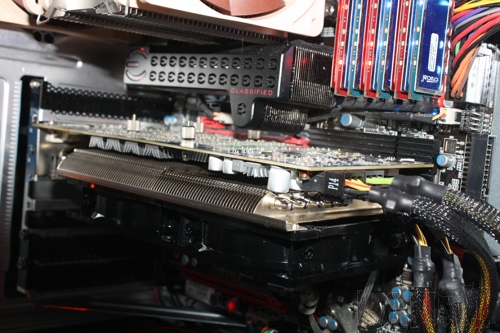 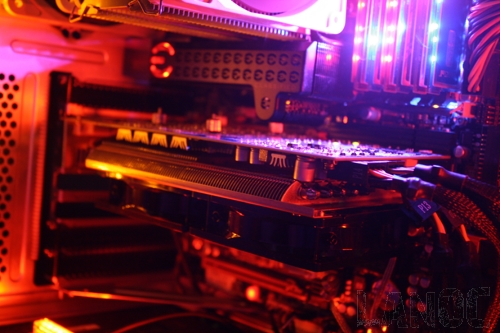 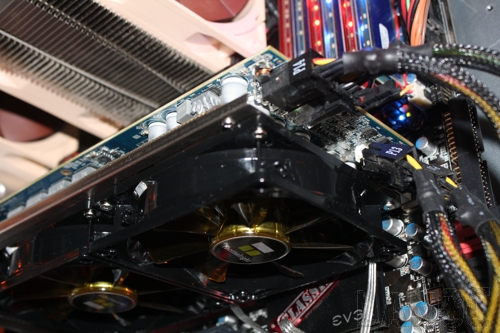 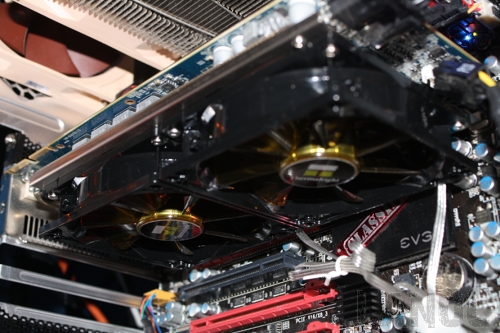 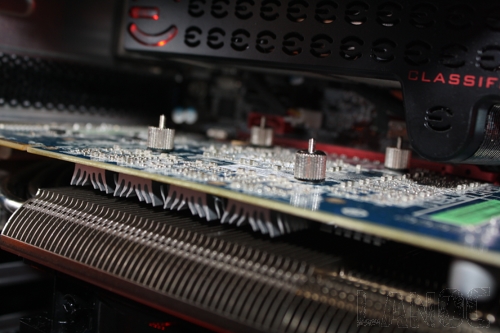 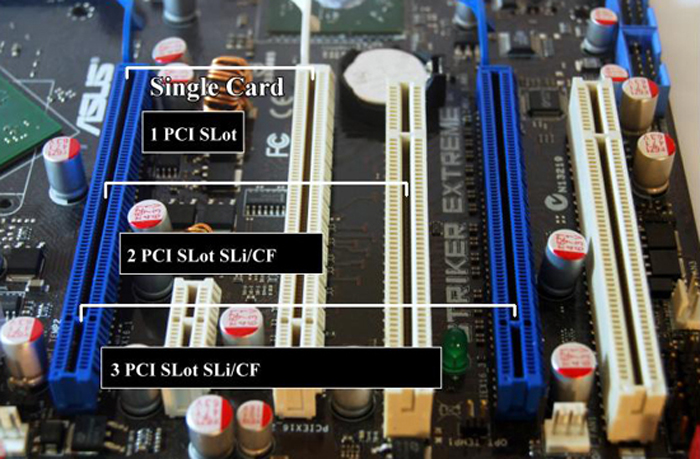 So you have seen the amazing performance numbers and I talked about how quite it is. There has to be a downside right? If you are like me and running Crossfire this option isn't really for you. You will need an extra two PCI slots (see picture above from Thermalright's website) between each card just to make it fit. Thermalright sent me two heatsinks in hopes that I could get crossfire working with them but I have been at a lose. In fact this review was VERY delayed while I hunted and searched for thinner fans or any other option that would help me run this amazing heatsink on both of my cards. In the end I decided to test it on just one with the intention of being able to run the bottom card with the heatsink and stock on the top card. As it turns out the bolts on the backside of the heatsink stick out far enough to prevent me from doing that also. You can  Please don't take this as a major bash on the T-Rad2, most people don't run Crossfire anyhow. But considering the TRad is advertised as SLI and Crossfire ready everyone should be aware of the two extra PCI slot limitation. Even with that downside the performance of the TRad2 speaks for itself, if you're looking for a way to cool your video card down or to cut down on noise you really should take a look at this one. 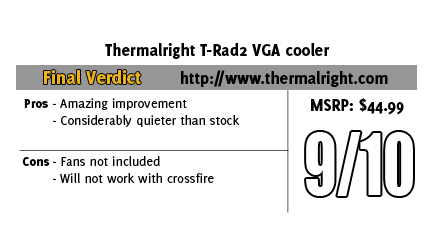 You might call him obsessed or just a hardcore geek. Wes's obsession with gaming hardware and gadgets isn't anything new, he could be found taking things apart even as a child. When not poking around in PC's he can be found playing League of Legends, Awesomenauts, or Civilization 5 or watching a wide variety of TV shows and Movies. A car guy at heart, the same things that draw him into tweaking cars apply when building good looking fast computers. If you are interested in writing for Wes here at LanOC you can reach out to him directly using our contact form.
Discuss this article
Log in to comment
Posts in discussion: Thermalright T-Rad2 VGA cooler