Having reviewed almost the entire HAF lineup from Cooler Master there was an obvious missing piece in their lineup when it comes to a small low cost case to compete with Antec’s 200. Today Cooler Master released their answer to the 200 in the form of their HAF 912. Keeping with their “High Air Flow” theme and keeping the price inline it could very well be one of the best values on the market. Let’s take a closer look to see if this is the “case”.

Review By: Adam and Wes 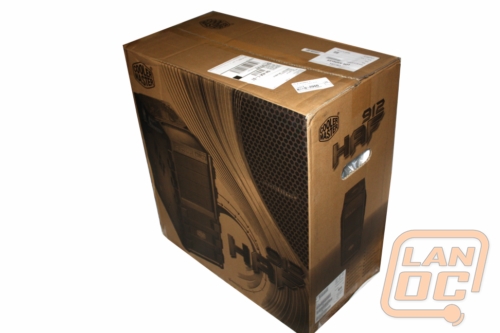 I was a little disappointed to see the absence of the usual Cooler Master color scheme and glossy finish box, traded in instead for a plain brown, cardboard texture with black images. However, when you consider that cutting back the lavish artwork also reduces the price of the product, it's hard to hold a grudge. Despite the lack of color, the image design on the front of the packaging is still pretty inticate, sporting a large shot of the case itself and a callout of the mesh material that has become so popular within the HAF line. Also present are brushstrokes that seem to represent air, with actual arrows near the bottom that resemble airflow.

On the right and left side, you'll find an alternative perspective shot of the 912, as wekk as a specifications table. On the back there are detailed callouts between three images of the case (rear, interior, and front). Along the bottom are four more drawn pictures showcasing more features. 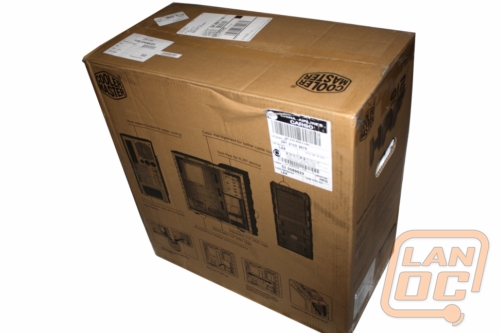 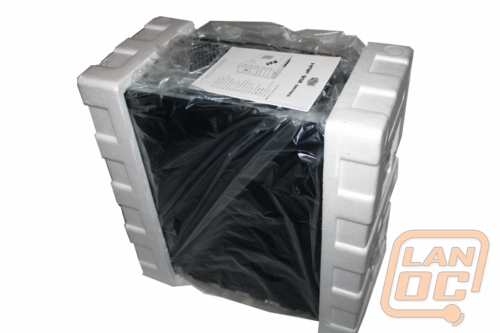 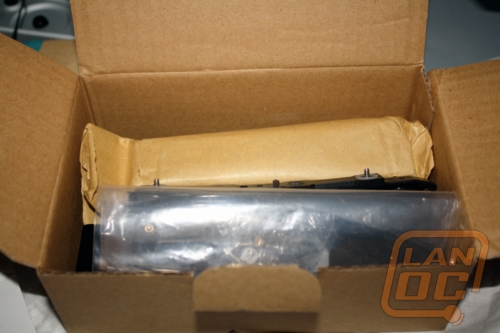 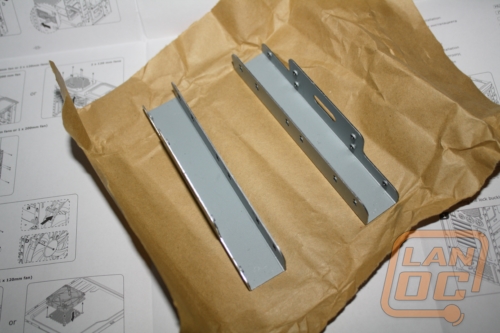 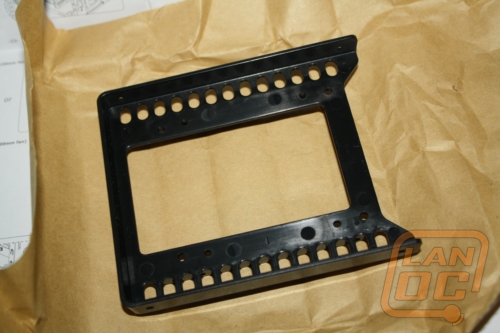 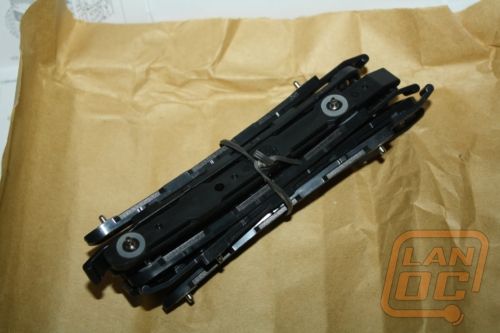 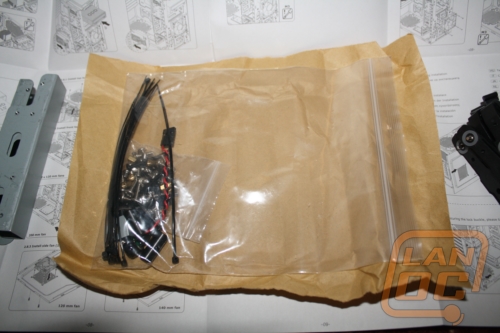 The form of the HAF series has always been one of my favorite features, and the 912 is no different. Cooler Master holds on to the spirit of a mid-tower while creating a unique facade, giving the chassis an rugged appearance. Combined with the mesh filters and the subtle print of the HAF logo on the side panel, the 912 achieves simplicity and appeal. 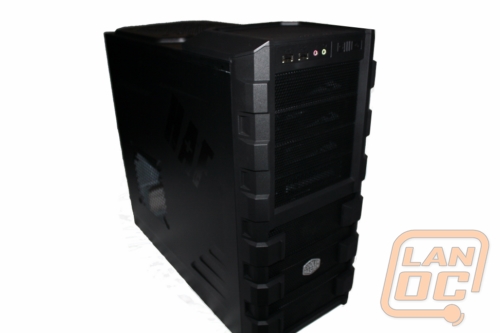 The front of the case is lined with protruding rows, a common theme that you'll find a few different places. This helps to create the rough look of the 912, which as mentioned is both attractive and functional: the pattern provides several grips locations that are easy to carry from than a straight-edged chassis. It also speaks some to the inspiration Cooler Master had in designing the chassis. The military-style pays somewhat of a tribute to the competiveness that PC gaming is so well known for. 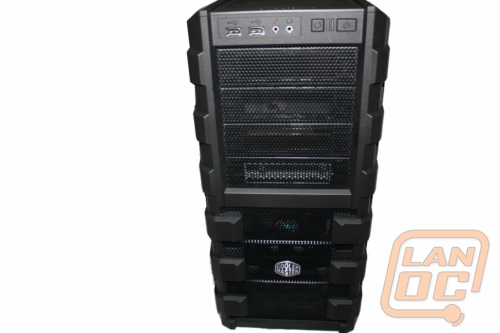 Four expansion bay slots occupy the majority of the front side of the case, mesh placeholders lined with dust catchers present for unused slots. The bottom expansion slot also includes a smaller 3.5" cut-out for smaller form devices. On the rear side, you'll find an installed exhaust fan, as well as three grommets for water cooling (tubes and cords). There are also seven horizontal PCI expansion slots, but sadly no tool-less entry here. There is also one extra vertical slot to the right of the former bay that would be great for devices such as fan controllers. 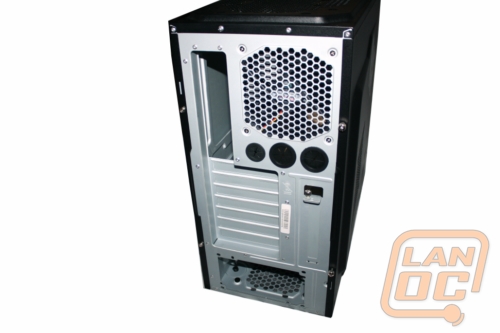 The top is a bit interesting for the 912. The chassis is equipped with a raised deck continuing from the front that ends about a fourth of the way of the top surface. The latter half of the top is occupied by the large mesh oval, consistent with the previous entries in the HAF line but no installed fan for the 912. The interesting aspect however is that the radiator for water cooling is intended to be installed on the exterior of the mesh location, instead of mounting on the interior. Cords then run out the mentioned grommets to the radiator. 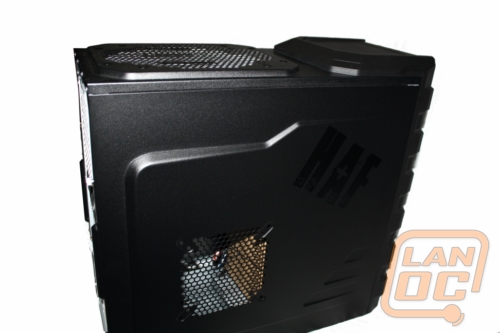 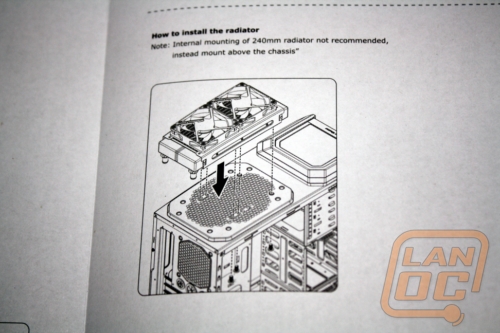 The bottom of the 912 features four plastic feet to raise the chassis from any surface, so that a power supply can take advantage of the vent and be installed upside-down or otherwise.

Packing all of your components into the 932 and 922 with their spacious interiors was never a problem. But with a considerably smaller area to work with, Cooler Master had to get a little creative to pack large video cards like the 5970. The four bay hard drive cage is removable to fit video cards up to 15.4 inches, but you can fit a card up to 10.75 inches without removing the cage. This also means that you will be able to shoe horn your HD5870 into this case along with your 12 TB’s of hard drives. Outside of the 6 3 ½ inch hard drive bays, you also have 4 5 ¼ bays, more than some cases that are considerably bigger have! The top 5 ¼ drive bay uses a tool-less drive lock, but to save costs the other three bays lack it. To add to that, they have a third drive cage just in front of the power supply that will let you pack away two 2.5 inch drives. If that isn’t enough they have also included an adapter to give you two more 2.5 inch bays, giving you a grand total of four. 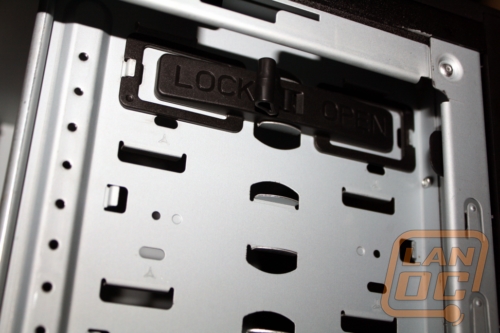 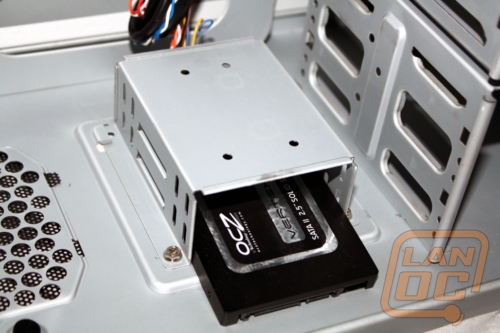 HAF stands for High Air Flow, with a name like that you expect to see enough cooling to cause a tornado in your case. With the HAF 912 the biggest limitation is price. Cooler Master has given multiple areas to both add large fans and/or upgrade the current fans to much larger 200MM fans. Oddly enough the case lacks the large 200 MM fan up top that was a HAF signature. They did leave you a spot to add two 120mm fans or one 200mm fan, you can also use this spot to run an external radiator. The 912 does include two 120mm fans, one on the front and the 2nd on the back of the case. 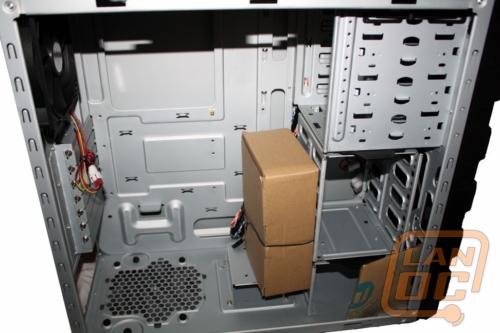 At 9.1 inches wide the HAF 912 is just over a half inch wider than most other comparable cases, Cooler Master used that added space to give you a little more room behind the motherboard tray for wire management. To get your wires to the back they have included cutouts both in front of the power supply and on both the side and top of the motherboard. This is notable because a lot of cases do not have an access hole for running the 4/8 pin connector.

To help install an aftermarket heatsink they have also given a large access hole in the motherboard tray. To cap off my coverage of the interior of the HAF 912, I would normally make a point to talk down on the lack of a painted interior. With a price point of less than $60 bucks, the lack of is almost expected. In our documentation they suggested that we may see black interior on an “advanced” model along with a side panel window to take advantage of it. 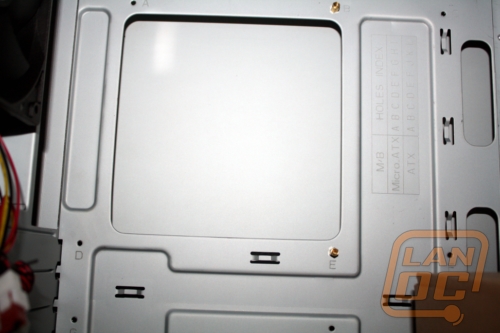 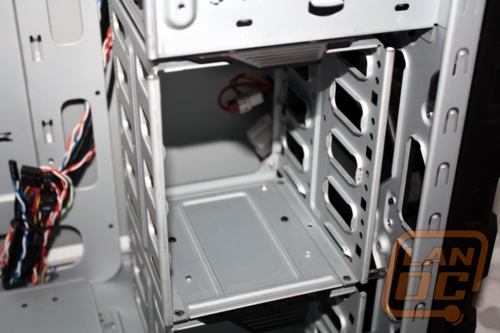 Installing your rig into the small HAF 912 is aided by the amazing wire management locations along with a generous amount of room behind the motherboard tray. Installing the hard drives with the tool-less bay guides was simple and very quick. With everything packed in the cooling performance was more than adequate, although I would have preferred to have had a fan to help blow the hot air out of the top. When compared to other cases in this price range and size, the performance of the HAF 912 would be considered above average. And with only two 120mm fans running the noise level is more than good enough considering the open air design. 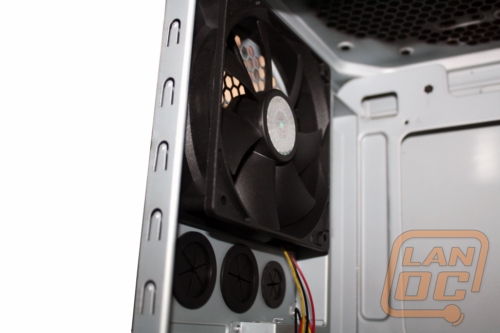 Until the release of the 912, price-point may have been the most restrictive aspect of the HAF series. When a company attempts to create a cost-friendly version of any product, there are countless ways to do it wrong. Staying true to the rugged look, airflow, and water-cooling capacities, it's safe to say Cooler Master has successfully brought the HAF line to the budget-minded user. 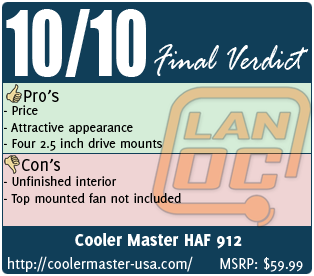 You might call him obsessed or just a hardcore geek. Wes's obsession with gaming hardware and gadgets isn't anything new, he could be found taking things apart even as a child. When not poking around in PC's he can be found playing League of Legends, Awesomenauts, or Civilization 5 or watching a wide variety of TV shows and Movies. A car guy at heart, the same things that draw him into tweaking cars apply when building good looking fast computers. If you are interested in writing for Wes here at LanOC you can reach out to him directly using our contact form.
Discuss this article
Log in to comment
Posts in discussion: Cooler Master HAF 912

We have 1724 guests and one member online