Conformity in the world of technology is rare these days, each company aspiring to create their own unique solution to suit our computing needs. The majority of the time, its' a change that's as drastic as it is risky, and only appeals to a certain demographic. But every now and then, a revolution comes along that makes everyone stop and think, "Why isn't this the standard?" Silverstone has discovered such a design, exemplified in their new Raven 2 chassis, and has sent us a sample to see for ourselves.

Packaging:
A very slick black-with-smoke graphic occupies the background, with images of the Raven 2 gracing the front and back, as well as specifications on either side. The box is unusually tall, which is more impressive when you open the flaps and realize the height of packaging is actually the width of the case. This is the first, and more subtle, change from ordinary towers: the Raven 2 provides more room inside by expanding the width, not the height. Two foam placeholders secure the tower in packaging, and house the accessories box. A gentle, thin cloth covers the exterior of the Raven 2 to ensure protection during shipping. 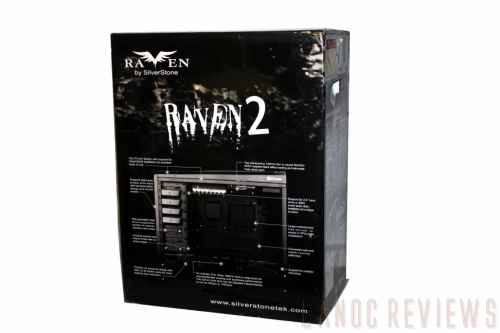 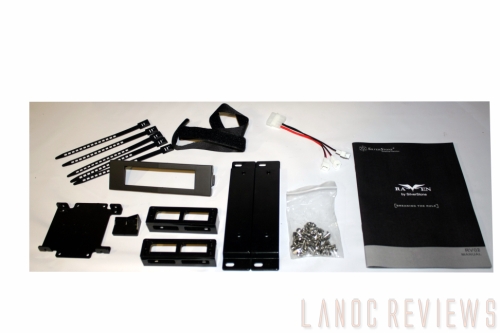 Installation:
Gaining access to the interior of the the Raven 2 is a tool-less effort, consisting of removing the top panel, which will reveal the thumbscrews of the side panels. Notice anything different yet? Perhaps that the chassis seems to be rotated? 90 degrees, to be exact. Instead of the thumbscrews being on the back of the case as usual, they are now on the top. This means, as you may have guessed, that the top of the Raven 2 is the typical rear of other towers. Here you'll find the power supply mount, PCI slots, and motherboard I/O panel. 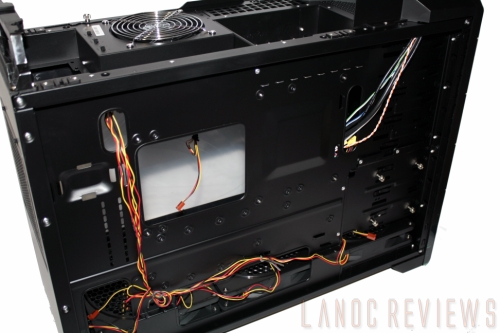 Once the side panels are removed, you'll note three 180mm fans that run along the bottom of the case, designed to bring air in from underneath the raised chassis, and push it out along with the heat generated from the hardware in it's path, which is everything. Heat rises anyway, right? Why fight it? An additional 120mm fan is mounted on top of the case to help pull the air out, and the fan on the power supply unit is designed to push out the back of the chassis. Between the top fan and the power supply bay are high-to-low speed switches for the 180mm fans below, allowing customization of each. 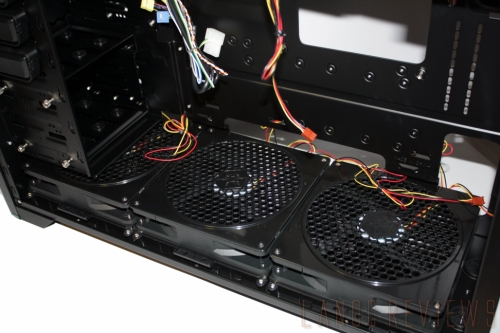 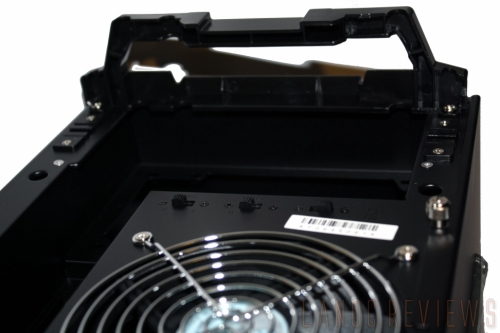 To help with the installation of the power supply unit (since it will be suspended from the top of the case), Silverstone has included a strap that is fed through the back of the motherboard tray to hold the unit in position during and after mounting. The unit is then secured using the mounting screws provided, as well as the power supply unit holder, which creates a ledge for the unit to rest on. Since the dimensions of units can vary, compatibility is ensured with a running line of holes for the holder to be mounted in, depending on your PSU's size (the Raven 2 supports up to 230mm in length). 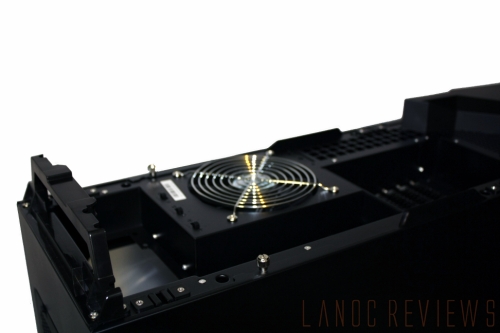 The unused 5.25" drive bays are occupied with covers that need to be pushed out from the inside of the case, revealing steel plates underneath that will need to be removed as well. Once this is done, installation of optical drives becomes tool-less: simply silde the drive in, align with the front of the case, can press to button on the inside bay to the lock position. Adapters for 3.5" drives are included as well. 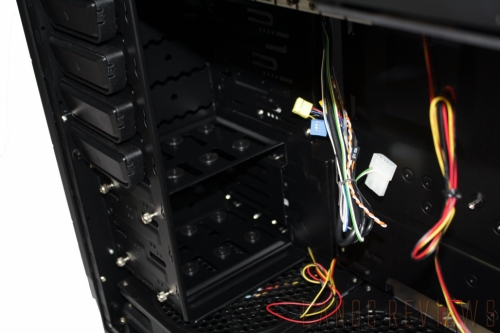 The Raven 2 features a more old-school hard drive bay, containing a removable cage using thumbscrews. The cage only supports three hard drives, half of its predecessor, the Raven 1. Similar Silverstone models also feature a more tool-less rack design that is popular in many towers. Once the cage is removed, supplied mounting screws are used to secure the drives in place, and the cage is re-inserted. 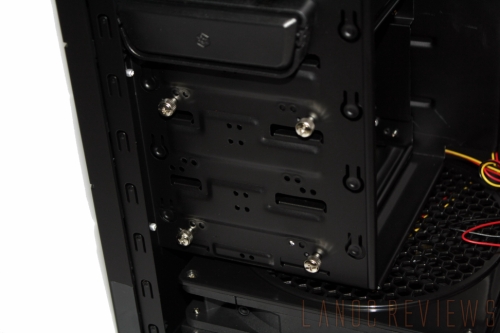 The redeeming feature of the Raven 2 is the inclusion of an SSD bracket that mounts on the reverse side of the motherboard tray, behind the optical drives. This can also be used for 2.5" drives, but problems with efficient cooling may be encountered from use with HDD's.

The Raven 2 supports SSI CEB, ATX at a maximum of 12" x 11", and Micro ATX. Motherboard risers are provided, and should be positioned in accordance to your model, and secured using the screws provided with the accessories as well.

As mentioned before, the motherboard is mounted at a 90 degree rotation, so expansion slots will be postioned at the top of the case. This shouldn't confuse you too much, and installing expansion cards becomes routine once you get over the idea of them being on top. Simply remove the placeholders that correspond with the expansion slot, insert, and re-secure with provided screws. 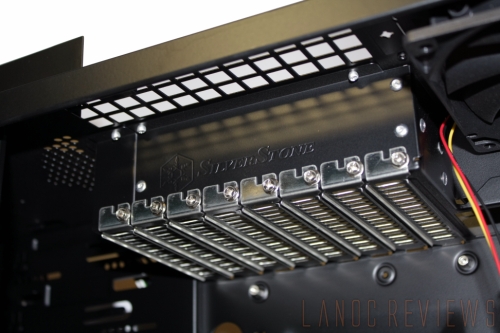 The Raven 2 is also water-cooling compatible, achieved by removing the three fan filters from the 180mm fans, unscrewing the six screws holding the fan switch on top, and removing the the bottom fan grill via 12 screws holding it in place. Using the included brackets, the radiator is secured to the fans and inserted in the case. Once the radiator is secure, the fan swtiches can be reinstalled. 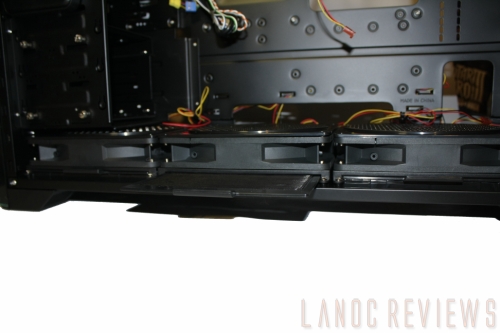 Performance:
The exterior of the Raven 2 is a slick black, with a power LED light running along the front. The top of the case has a unique vent design to help compliment the Raven's appearance. Since the three 180mm fans at the bottom pull air in from underneath, the entire chassis is raised at the four corners. As mentioned, the tower is quite large, and exceeds average dimensions through width as opposed to height, so if you're used to carrying towers by their sides, you may find yourself using alternative grip points to transport this beast.

Given that the Raven 2 is a windowed case, Silverstone has taken the effort to paint the interior all black, matching the exterior color, as opposed to the dull grey factory look. This helps to make the chassis look all the more attractive, and with some lighting accessories, it shouldn't be hard to make this case look great.

As touched on above, the cooling in the Raven 2 is great. Working with the natural flow of heat (from low to high), the Raven 2 maximizes airflow performance by in-taking air from underneath and pushing out the top, taking heat from hardware inside the case along with it. This revolutionary design is not only more efficient, but extremely simple. As long as you can get over your cords running to the top of your tower instead of the back, you're going to be in awe. We put the RV02 up against one of our favorites Cooler Master's 840. The 840's cooling although impressive was no match for the Raven 2's efficient airflow design combined with 660mm's of cooling. Not only did we see a 2 degree tempature drop on the cpu, the video card temps dropped 4 degree's, very impressive!

Overall:
Who would've thought that something as simple as rotating a motherboard 90 degrees could have such an impact on the efficiency of a system? Silverstone. And the Raven 2 is an excellent example of the results, with a revolutionary cooling system and sleek design, don't be surprised when you see other companies modeling their chassis after this. Add the amazing cooling performance to silverstones attention to detail and a price point of $159 it is much cheaper than comparible high end cases. My only complaint is with the hard drive bad design, not only is it difficult to use, it also doesn't hold as many hard drives as similar sized cases. 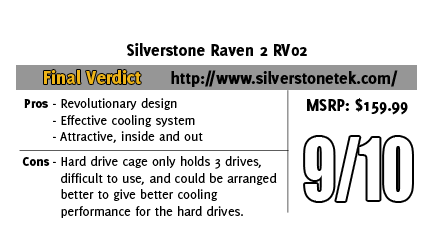 Author: Lersar
Contributing Editor / Event Staff
Adam is a big proponent of LAN parties, esports and speed-running, and helps organize our semi-annual LAN events. He has covered hardware and software reviews of a wide variety, but most content these days come from event coverage, such as other LAN parties.
Discuss this article
Log in to comment
Posts in discussion: Silverstone Raven 2