Cooler Master has made their name producing PC cases for gamers that provide good cooling along with innovative styling. This past August Cooler Master introduced a new case called the HAF 932, HAF being an acronym for High Air Flow. If all of their cases have top of the line cooling, what is it they considered high air flow? With 4 fans adding up to 830mm's of fan along with a ton of mesh the HAF defiantly lived up to its name. Of course with it being a full sized case there was a demand for a mid tower version. Today we have the unique opportunity to look at what Cooler Master designed to fill that gap before you can even buy it in stores. Today we take a look at the HAF 922 and find out if it will live in the shadow of its big brother, or make a name for itself also. 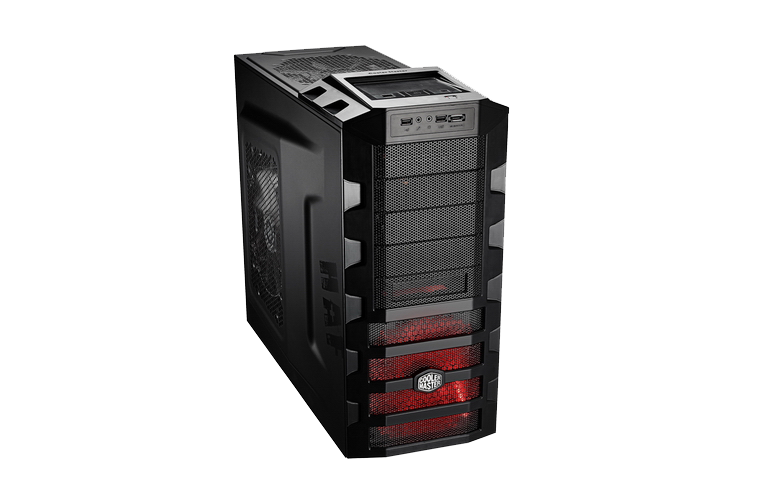 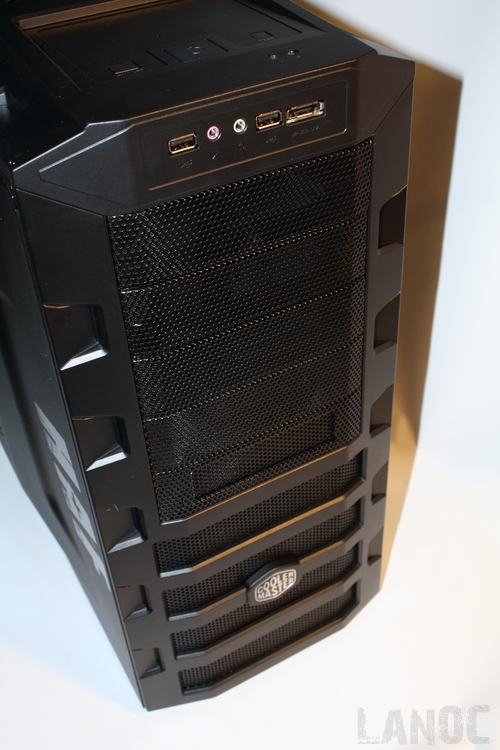 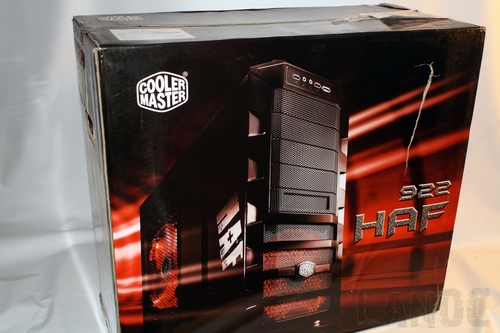 It's obvious that Cooler Master spent some time in the art department when desiging the 922's packaging. The front of the box has a large photo of the HAF 922 with the LED fans lit up. On the back there is another full size picture of the case. Next to the case there is a feature list along with smaller pictures on a few of the features. Inside the case is well protected with the standard foam and plastic bag. 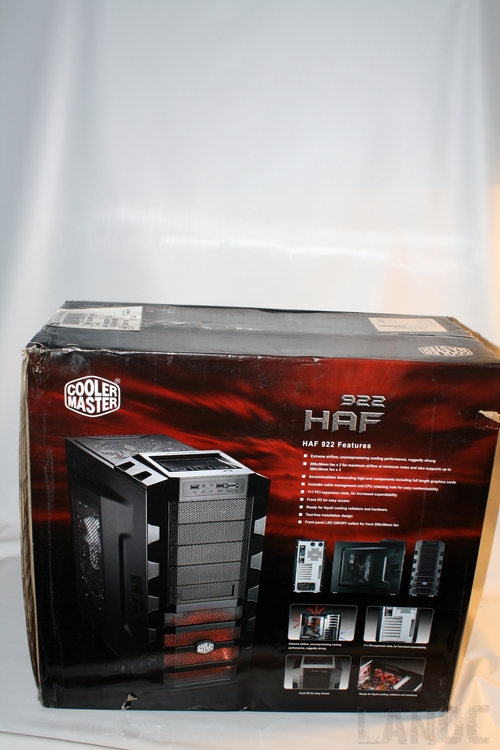 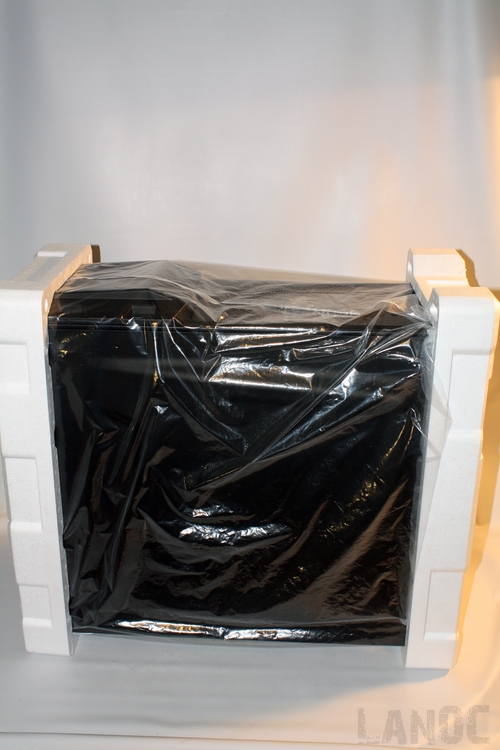 The front of the HAF lives up to its name with mesh over the entire front. The front looks similar to the HAF 932 but unlike the Twelve Hundred and Nine Hundred, Cooler Master didn't make the 922 a clone of its big brother. The redesigned front still has the rugged looks that the HAF is known for. You will also find the i/o front panel up top with two USB, one eSATA, and microphone and headphone hookups. The top of the case houses a 200mm fan along with the power, reset, and fan LED power button. Cooler Master took a few tips from their Storm line of cases when they designed the side panels. Im was excited to see that the bulging side panels was included on the 922, they have made wire management simple in my sniper case. On the left side panel they dropped the 932's half window in favor of a mesh side panel with the ability to have multiple sized fans attached to it, also on the side you will find the HAF logo painted on the case in black making it hard to see most of the time. Lastly looking at the back of the case, I was disappointed to see bare metal, with the black theme of the case I would have liked to see it flow into the back also. They did however include a full seven PCI slots along with one more positioned above the others perfect for a slot cooler. Water cooling grommets and a bottom mounted power supply finish up the back panel. 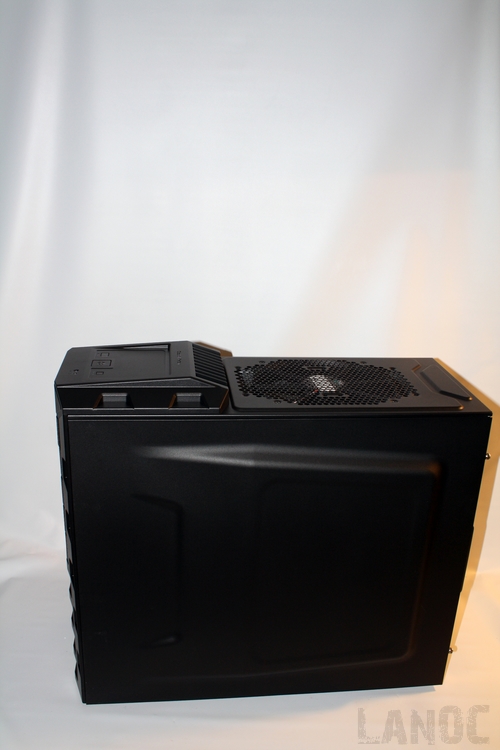 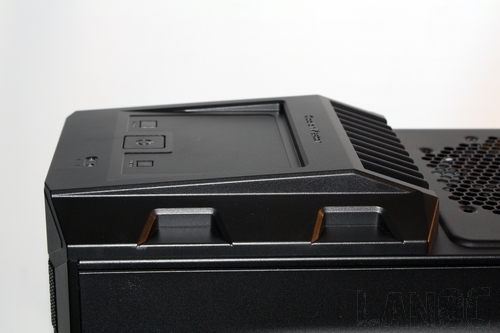 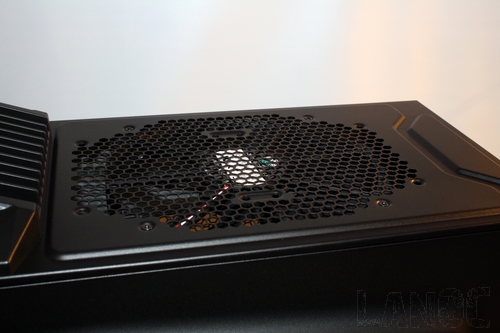 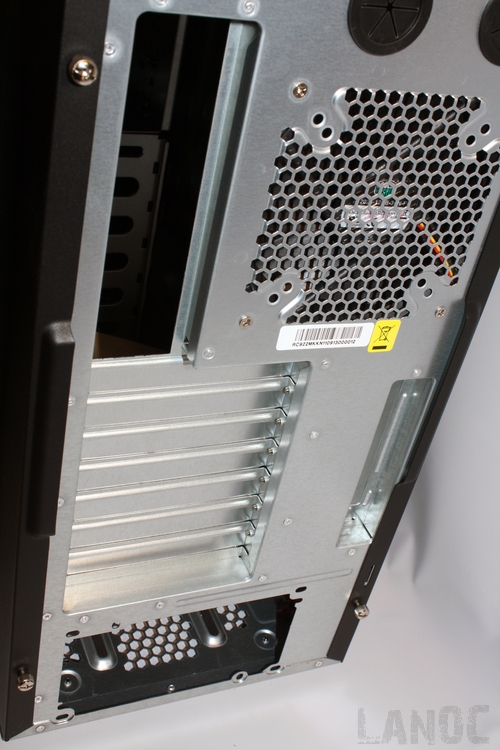 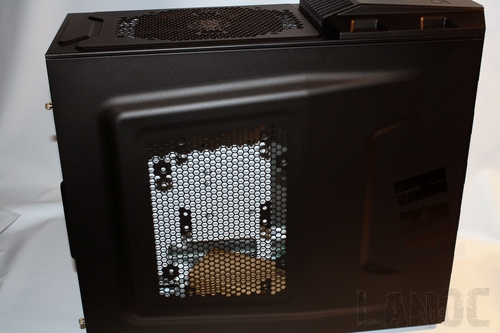 Inside the case right away I noticed a lot of things that reminded me of the ACTS 840, this isn't a big surprise considering the 840 was similar internally to the HAF 932 other than the removable motherboard tray. The five slide out hard drive trays got my attention, they are very easy to use. The 5 1/4 drive bays have the standard Cooler Master push button retention that is included in most of their cases. The motherboard backplate has a hole for easy access to the back of the CPU for installing CPU heatsinks along with holes for easy wire management. For cooling, you will find a black 120mm fan on the back panel along with two clear 200 mm fans on the top and front. The front fan has red LED's built in to give the case a red glow. To some people the 922 might seem very familiar, and for good reason. The 922 shares the exact same interior as the Storm Sniper, coming from a sniper user this is a good thing. 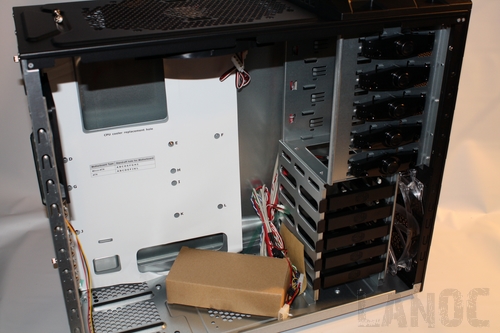 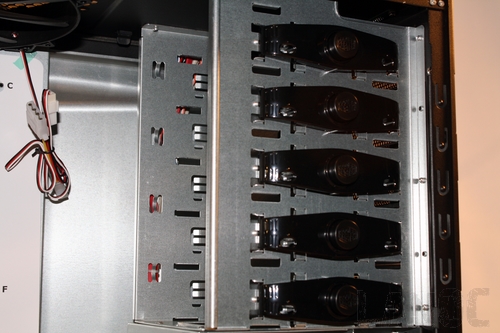 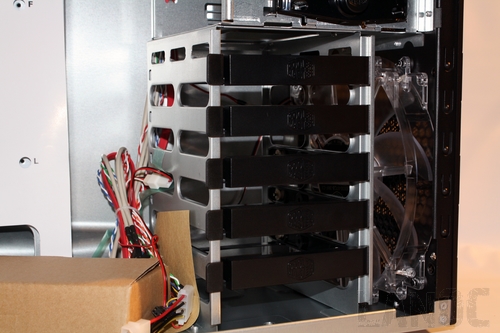 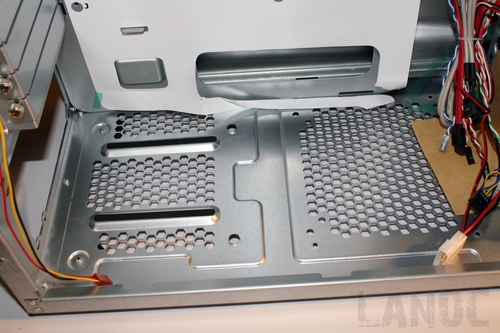 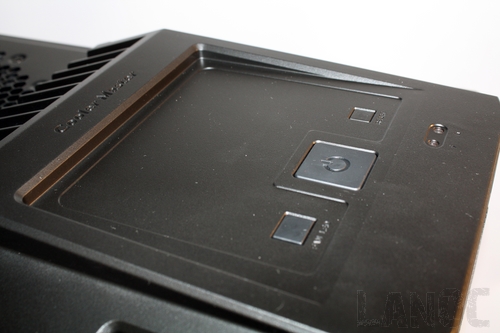 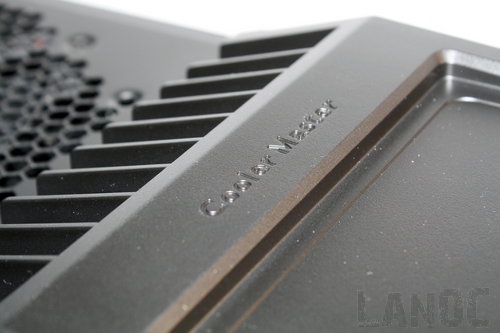 Getting everything put together went as expected, maybe its because its just like installing in my own rig? (lol) Going off of experience from my rig I went ahead and installed the DVD drive with screws on each side also to prevent any rattles, the style of tool free device used on the 5 1/4 inch drives is easy to use, but lets the drives rattle a little bit. The motherboard went in smoothly with Cooler Master's signature template that shows you where to put your standoffs. Installing the heatsink was a breeze with the access hole (at this point this hole should be on standard on every case, it's a shame you mostly only see it on Cooler Master cases). Wiring went smoothly also due to all of the room along with the bulged back panel, no worries of the panel not going on after everything is built. They even got rid of the troublesome screwless PCI slot holddowns that have caused me issues in the past. 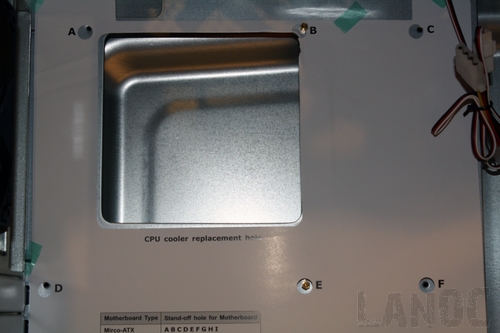 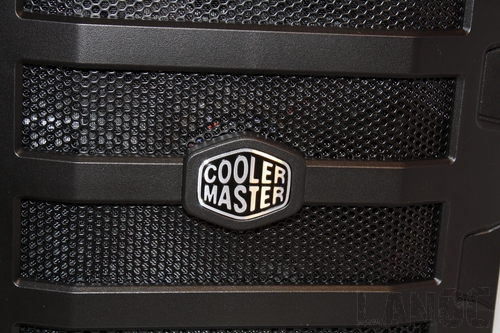 I wasn't surprised one bit when I had everything setup and computer never heated up. The HAF is designed to force as much air into the case as possible, keeping everything ice cold. What did surprise me though was the noise level; it wasn't dead silent like the Sileo 500 that I reviewed not long ago. However, considering the open-air design and amount of fans the case was very livable. Infact, having reviewed the Twelve Hundred and the Nine Hundred in the past there is no doubt that it is quieter; the only issue is the lack of a fan controller built in. Cooler Master included one on the Sniper and Antec has them on their cases, why not include one on the HAF? 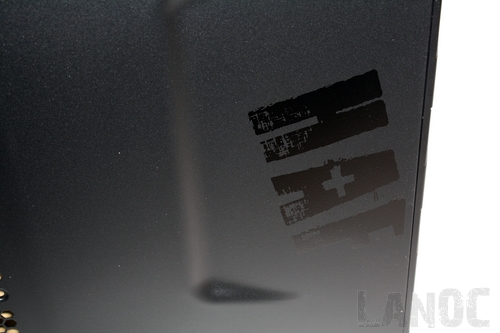 I am really excited to see a lot of the features implemented in Cooler Master's gaming brand Storm are starting to carry over to their other cases. Features like the extra PCI slot have multiple uses, perfect for fan speed controllers included with some heatsinks or even a slot cooler to help pull hot air away from your video cards. The CPU access hole should be included on every case made by any manufacture, as of now its mostly found on Cooler Master cases, it's obvious someone at Cooler Master has gone through the pains of installing and uninstalling heatsinks before. And of course the HAF 922's cooling is amazing. They could improve the case a little bit by including a fan controller similar to the Sniper and some of their competitors. I would also like to see the interior to be finished in black to give the case a cleaner look. The overall styling is sharp although I am not a huge fan of the "rugged" look. I can't fault the case for not being my style, there are a lot of people who really dig the style of the original HAF and will defiantly love the 922 also. If you are a fan of the HAF 932 but want something a little smaller the 922 is perfect for you, high air flow and lots of space in a well layed out design should make the 922 very popular with the gaming crowd. I wouldn't be surprised to see a few popping up at LAN Partys very soon! 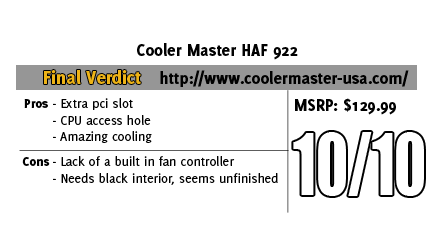 You might call him obsessed or just a hardcore geek. Wes's obsession with gaming hardware and gadgets isn't anything new, he could be found taking things apart even as a child. When not poking around in PC's he can be found playing League of Legends, Awesomenauts, or Civilization 5 or watching a wide variety of TV shows and Movies. A car guy at heart, the same things that draw him into tweaking cars apply when building good looking fast computers. If you are interested in writing for Wes here at LanOC you can reach out to him directly using our contact form.
Discuss this article
Log in to comment
Posts in discussion: Cooler Master HAF 922

We have 1030 guests and one member online