If you look up the definiton of gladiator on Dictionary.com, you'll get three results, one of which is interestingly accurate for a gaming chassis: "a person ...armed with a sword or other weapon and compelled to fight to the death in a public arena against another person or a wild animal, for the entertainment of the spectators." Is a case not a gamer's sword, fighting against others for our entertainment? Cooler Master has sent their warrior, the Gladiator 600, for us to review, and see how it stacks up as the thrid, and most simplistic definition: prizefighter.

Packaging
Perhaps the simplest of the simple, the Gladiator is shipped in a smooth white and purple box showcasing action shots of the case on the facade. Inside the chassis is tucked between two large pieces of Styrofoam the length of the case's height and then some to provide cushion. The Gladiator is then enveloped in a plastic wrap, and any finished panel on the case is protected with a plastic film. Cooler Master has taken a lot of effort in preserving the pristine look of the case, much appreciated by the consumer and especially me, always one who was a bit of a perfectionist. 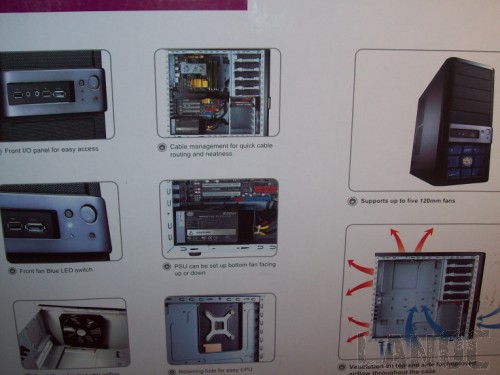 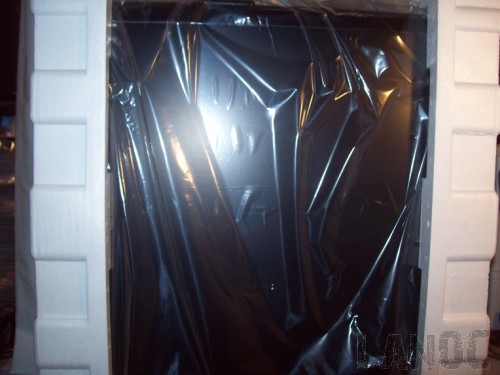 The Gladiator isn't cheap on accessories, though you won't find any at first glance, since CM has stashed them in a solid cardboard box inside the case. The container is strategically postioned inside the hard drive bay to minimize movement during shipment. 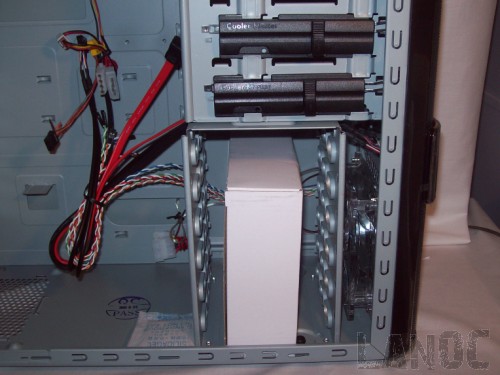 Opening the accessory box can be overwhelming, even for a veteran. Inside you'll find an array of hardware: motherboard risers, cable ties, additional screws, speaker accessory, HDD racks, and the 5.25" to 3.5" converter. 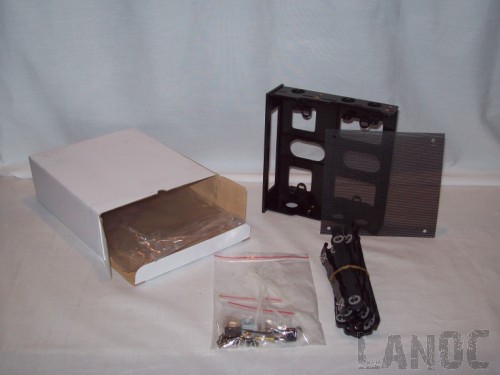 Installation
There are two parts to consider in the portion of the review, the first being the actual installation of the case, whether it be assembly of the chassis itself or something as simple constructing the motherboard tray. In the Gladiator 600 case, initial installation in minimal. As a matter of fact, Cooler Master has done a great job making the chassis ready for hardware installaion straight out of the box. The only assembly is that which is perhaps the grey middle ground between the two, such small things as installing the sliders on the hard drives so they'll pull in and out of the bay smoothly. Even so, this requires no more than pushing metals tabs firmly into the drives screw holes with no tools required. There other aspects are hooking up the wiring that is included, such as the front face plate power, the fans, and so on. 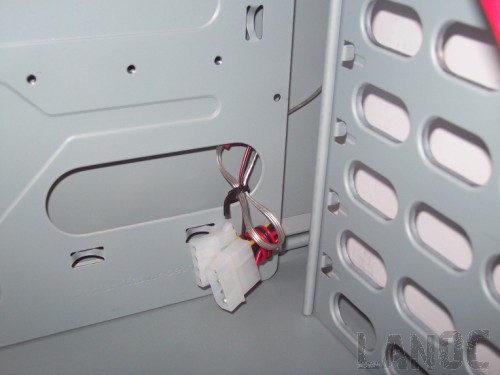 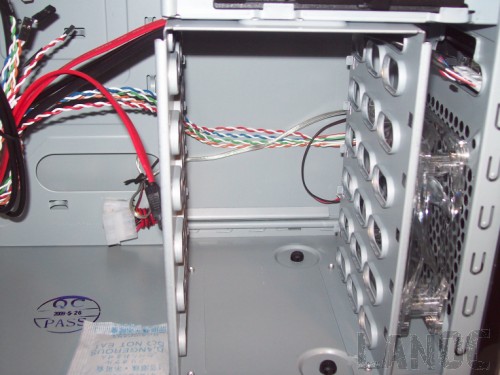 Speaking of fans, we'll begin there with hardware. The Gladiator 600 supports up to five fans, two of which (one in the front, which is a blue LED 120mm and one on the top which is 140mm) are included and installed. Every fan placement has the option to be either a 120mm or 140mm according to your preference. As mentioned, the included fans, and truly ever other cable already factory installed in the case, are connected and neatly organized. The recommended airflow set-up from Cooler Master is a combination of pulling cool air through the front, side and underneath and pushing hot air out through the back and top of the case. 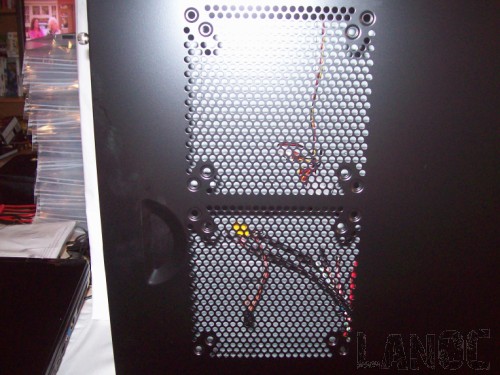 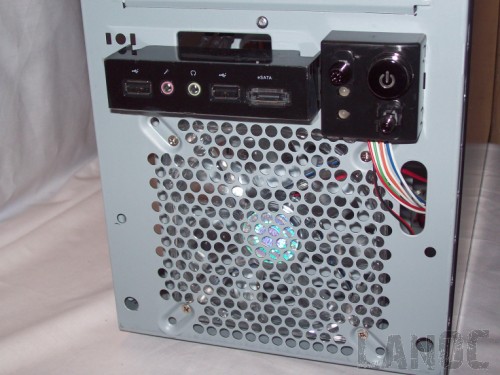 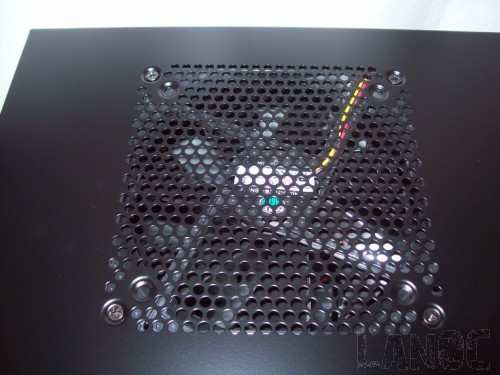 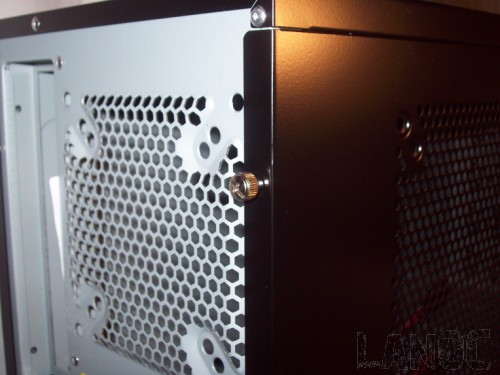 The hard drive bay has been crafted to be as open as possible to help with air flow, often one ofthe complaints of previous cases. Cooler Master has tried to minimize the structure as much as possbile, leaving both the front and back completely open, and bars on the sides large enough only to create racks for the drives to slide in and out of, with space between each and ovals that allow air on both sides of each HDD. The Gladiotor 600 will support up to 5 hard drives, with the hardware obviously included to convert to the easy-access pull trays. Once installed, SATA and power cables simply run from the drive through the back, which is where traditionally you'd find yourself doing most your cable management. However, Cooler Master has included some rised clip tabs for cables to run through that will keep them looking neat. However, if you've got a lot or are trying to hide as much cable as possible, you'll still be running through the back. 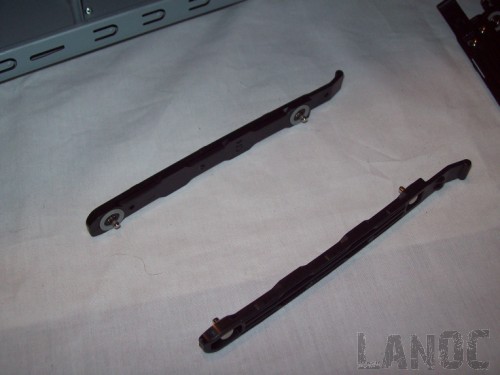 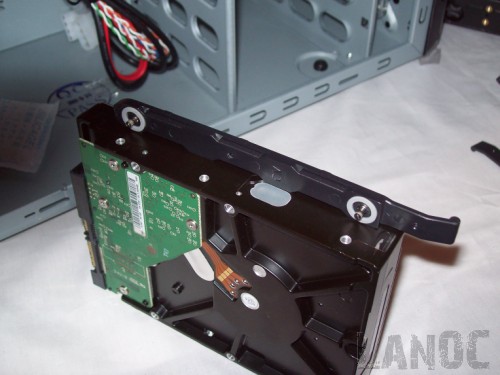 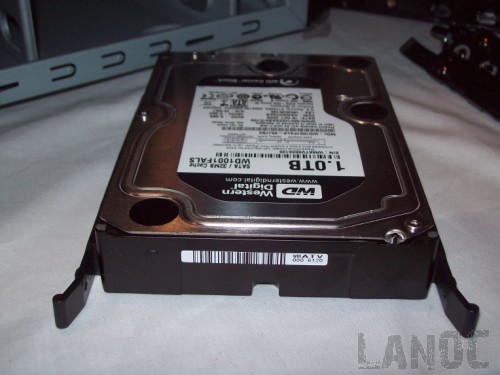 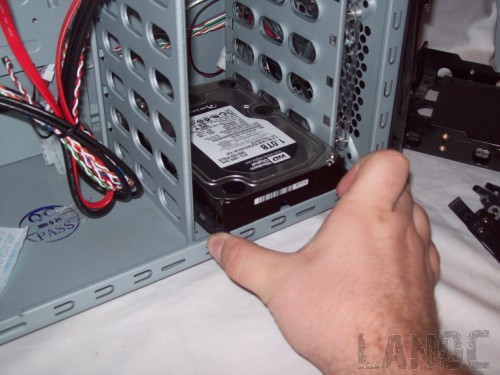 Any 5.25" drive, or 3.5" (since one of the former can be converted with the included mount), can be installed, with little problems. Five slots are available for use, and Cooler Master has left the screws out here, too. In the past, CM cases have had several techniques for eliminating tools, and the Gladiator 600 has seen a newer approaching, sporting sliding plastic bars that extend the rods into the drive when moved to and fro. Installation of the drives is fairly simple, though out of factory you'll need to twist off thin metal fillers the first time you use a slot. 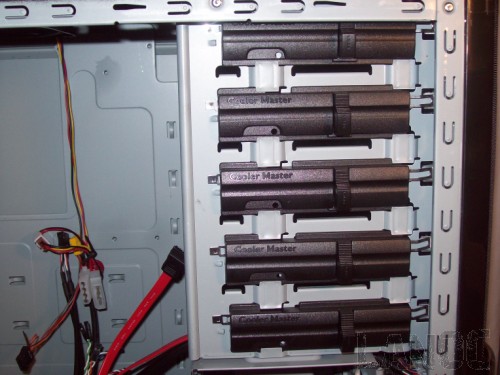 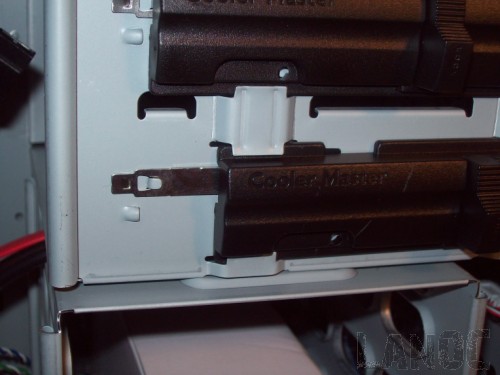 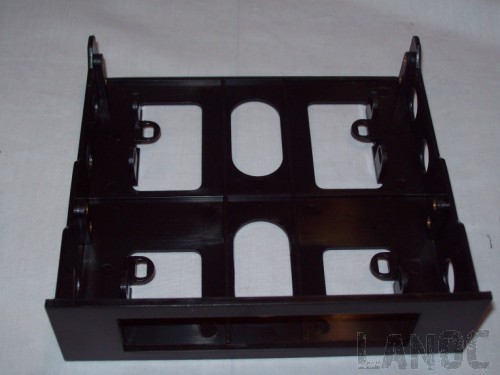 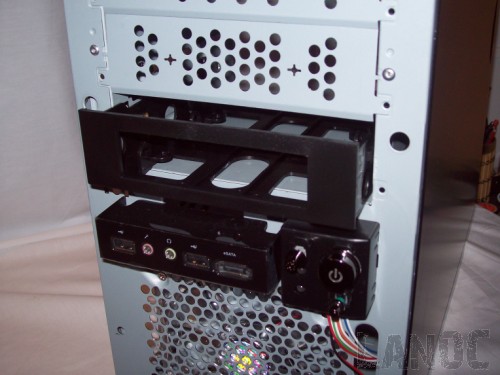 The power supply installs as it should, including an option to have the output fan from the PSU face up into the face or down and blow out through a screen on the bottom of the chassis. Again, either way works, just an option that is nice if you're going for a straight positive or negative air flow. With a smalled case such as the Gladiator 600, you should have no issues with any peripheral power cords reaching, and especially the motherboard power cables. 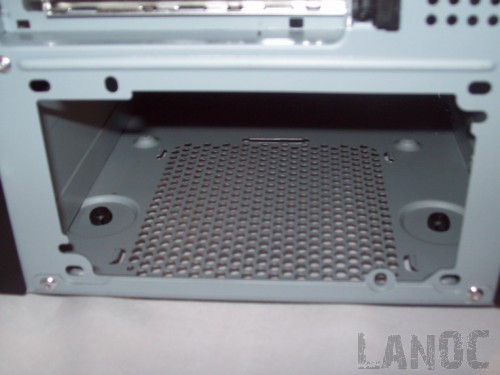 Finally, virtually any type of motherboard can be installed in the Gladiator 600, with your accessory panel facing out towards the back as standard, and your PCI slots lining up well with the included expansion slots. Cooler Master has again went for a more innovative apporach, including metal strips that inhabit the slots when not in use, held in place with a combination of pressure from the steel tabs and plastic 'switches' that secures the other side of the strip against the side. These simply swing out when squeezed from inside, but can be a bit of a pain and are a little fragile for their purpose. 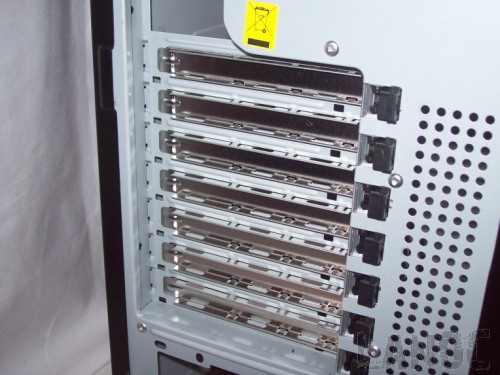 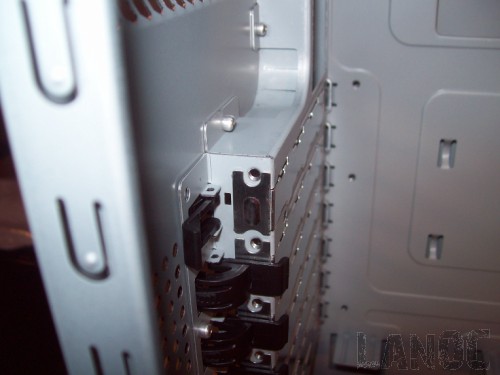 Finally, Cooler Master has included a sleek I/O panel on the front that features two USB 2.0 ports, one eSATA port (very nice), as well as a mic and audio port that support HD. The cables that connect from the panel to the mobo are plenty long; as a matter of fact, you may find yourself being creative to hide them if you're worried about cables showing, though thats probably not the case considering its not windowed. 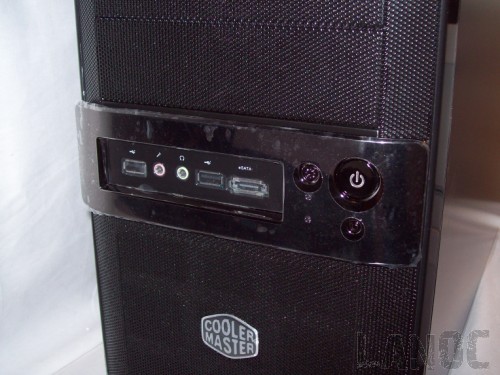 Performance
The Gladiatior 600 weighs 21.3lbs empty, and depending on your personal hardware it could beef it up quite a bit. Generally, however, its faily light and easy to transport. It's not a large chassis either, so getting a good grip on it won't be a problem either. It is made of a finished material the LOVES to hold finger prints and oil, so if you're a perfectionist, you'll find yourself contanstly wiping the exterior off. The downside to a smaller, light case is obviously cooling concerns, but Cooler Master has done a great job including a great coverage with fan squares.

Cable management is much of a concern, as mention due to the lack of window. But CM has included the option should you find your cords handicapping your air flow. Everything should reache to the PSU and motherboard without issue, and with the inclusion of the I/O panel things should be pretty handy.

With Cooler Master providing so many areas for fans, its worth mentioning that the case can look impressive with simply LED fans, the front 120mm fan already a blue LED, though its easy to replace should you want a different color. Even though its not a windowed case, there are a lot of screens to help with air flow, so seeing inside isn't impossible. Plus, the both sides come off easy with two thumb screws and a slide back, so there is some inspiration to make the interior look tidy. The Gladiator 600 is also a great case to mod, given it's plain black, flat facade.

Overall
There are a few downsides to this case, including some cramped room and air flow issues. But such is the nature of the beast; you'll probably find yourself upgrading from a mid tower if you want more room. There are some fragile pieces, and the finish likes to hold prints, but those are fairly small, manageable problems. The bottom line is Cooler Master has done a good job of improving cooling complaints from previous models and providing several options to increase air flow. The I/O panel is a great addition, especially when it comes to stepping up to the recent external drive craze. The Gladiator is a well-proportioned, light case thats great for traveling, and most importantly, does its job. The simplicity of its design leaves for either a nice, sleek look or the endless possibilities of your own imagination. 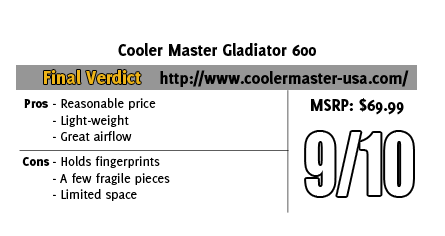 You might call him obsessed or just a hardcore geek. Wes's obsession with gaming hardware and gadgets isn't anything new, he could be found taking things apart even as a child. When not poking around in PC's he can be found playing League of Legends, Awesomenauts, or Civilization 5 or watching a wide variety of TV shows and Movies. A car guy at heart, the same things that draw him into tweaking cars apply when building good looking fast computers. If you are interested in writing for Wes here at LanOC you can reach out to him directly using our contact form.
Discuss this article
Log in to comment
Posts in discussion: Cooler Master Gladiator 600