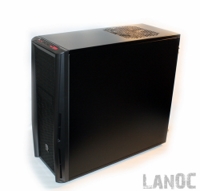 Earlier this year Thermaltake introduced their Element series of cases with the Element S. The Element S is a stylish case with a distinctive look without lots of lights and other distractions. Today I will be taking a closer look at the Element T, an entry level gaming case Thermaltake released to complement the Element S. We will find out if its right for your next budget build. 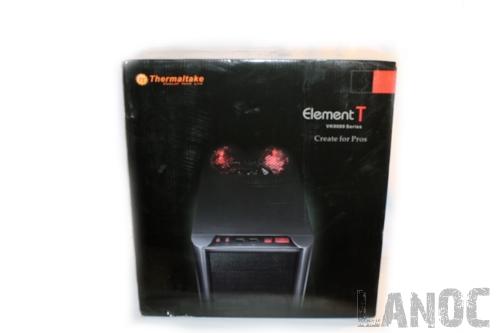 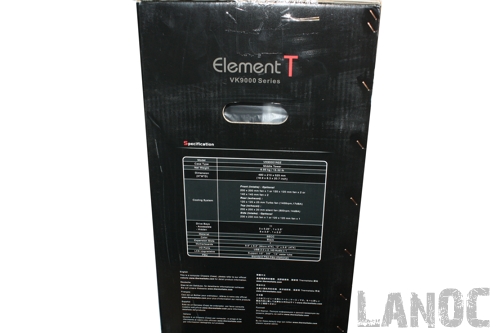 The front of the Element T's packaging is mostly black with picture of part of the case showing in the center. If you're looking to really find out about the case you will find everything you need to know on the back along with Air-Flow diagrams and pictures of each feature. Inside the case was safe and sound with the standard Styrofoam protecting it. 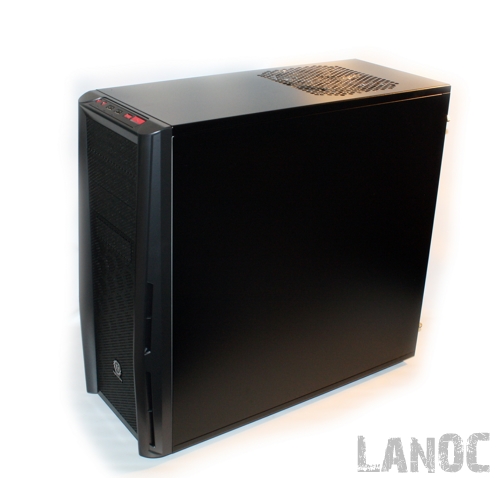 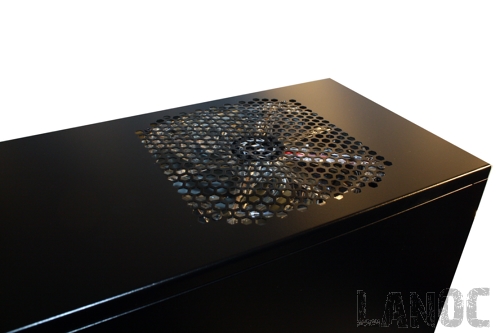 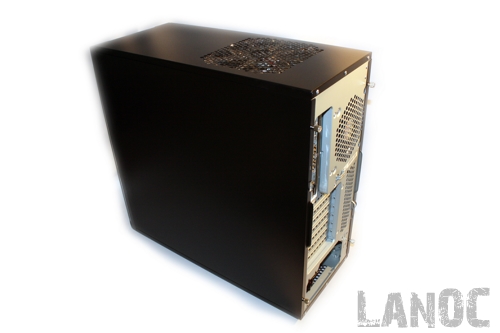 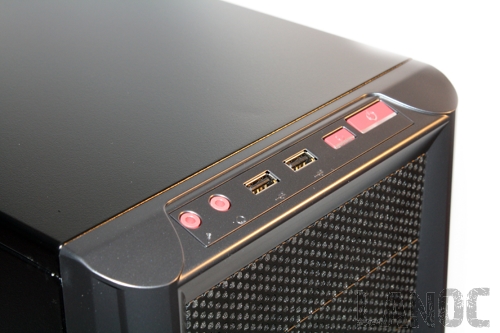 The Element can be best described as simple, good evidence of this can be found by looking at the top of the case. The top of the case houses a 200mm fan and is also where you will find the front i/o panel. With just two USB ports, microphone and headphone ports, and power and reset buttons  on the I/O panel the Element T lacks the 4+ USB ports and eSATA ports that we have grown accustom too. The front of the case carries on the simple theme with a honeycomb and mesh design. You will find three 5.25 inch drive bays along with one 3.5 inch bay if you need it. The entire front bezel can be removed to install your drives along with one or two fans if you need more cooling (two 120 or 140mm fans, or one 200mm fan).  Both sides are fairly uneventful, the left side does include an optional are to install ether a 120 or 230mm fan if needed. Out back the silver chassis shows itself along with vents in almost every possible spot. If that wasn't enough there is also a 120mm fan setup to finish out the cooling. 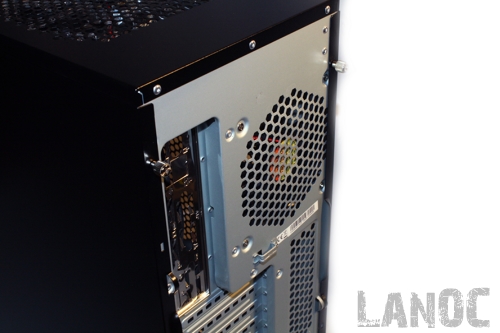 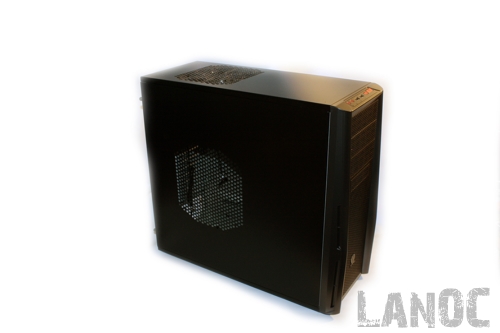 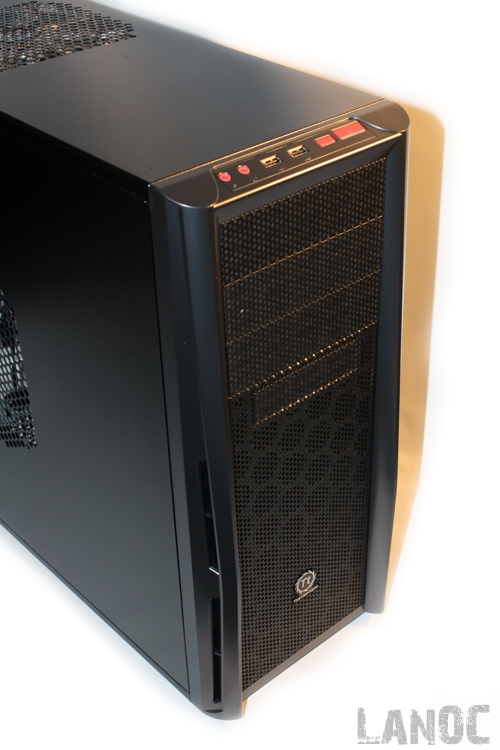 The interior also has the simple theme going on. You won't find a bunch of holes for wire management or any other luxuries. They did include an access hole for the back of the CPU though, I'm glad to see that wasn't lost in the cost cutting efforts. One 5.25 inch drive bay and one 3.5 inch drive bay includes a tool less retention clip, with the other  5 3.5inch bays and 2 5.25 bays you will have to use thumb screws. 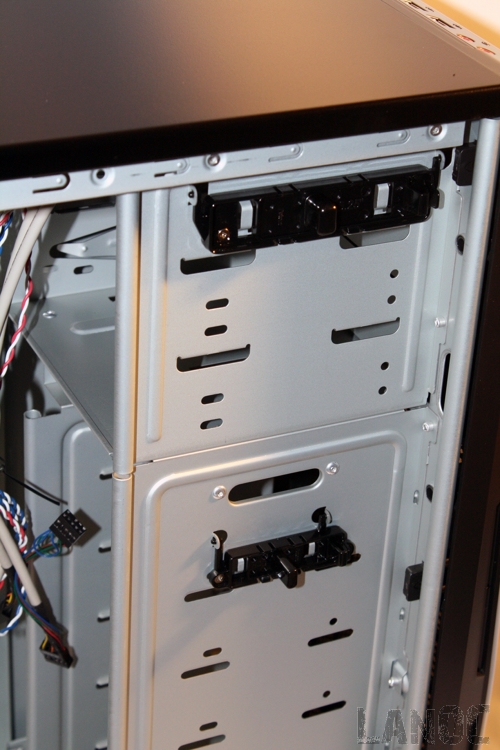 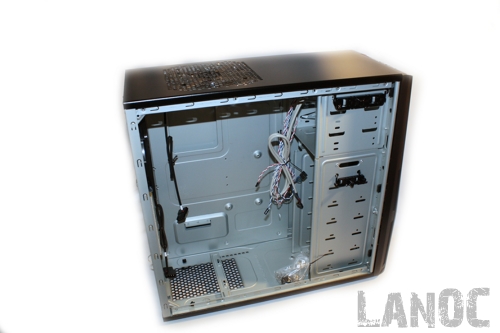 Installing everything into the Element T went well but lacked the comforts of the high end cases, the lack of wire management made for a mess of wires until I got in there with some zip ties. With everything up and running I found the Element T's cooling to be adequate but not as extreme as other more expensive gaming cases. With a 200mm fan and a 120mm fan the noise level was again livable but not as quite as more expensive cases. 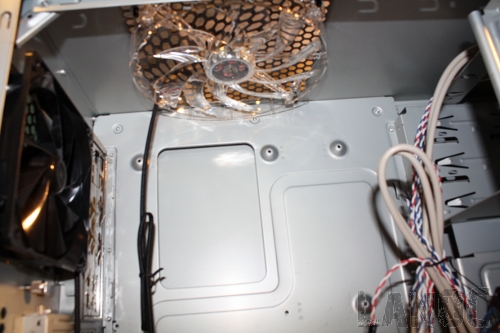 Obviously the Element T is an entry level gaming case, because of that you can only expect so much. I was a little disappointed that it didn’t seem to have the features and quality of the M9 VI1000 that I reviewed a while back considering they run at around the same price. The Element T isn’t a bad case, I just think it should be about 10 dollars cheaper to be a value as an entry level gaming case. The lack of wire management and even skimping on extra tool-less mounting brackets make working in the case harder than it needs to be. If you plan on being in the case at any point after the initial build I would recommend you take a look at the M9 or the Element T’s big brother. But at the right price this could be a perfect budget case with adequate cooling and reasonable noise levels. 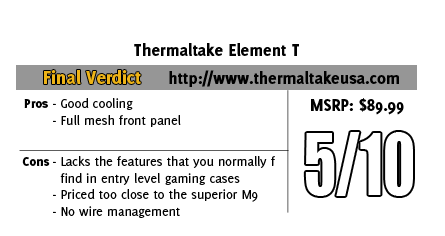 You might call him obsessed or just a hardcore geek. Wes's obsession with gaming hardware and gadgets isn't anything new, he could be found taking things apart even as a child. When not poking around in PC's he can be found playing League of Legends, Awesomenauts, or Civilization 5 or watching a wide variety of TV shows and Movies. A car guy at heart, the same things that draw him into tweaking cars apply when building good looking fast computers. If you are interested in writing for Wes here at LanOC you can reach out to him directly using our contact form.
Discuss this article
Log in to comment
Posts in discussion: Thermaltake Element T

We have 1835 guests and one member online