In the PC gaming world it seems like everything just keeps getting bigger and bigger. Recently we looked at the Coolermaster 840, at over 22 inches tall it's a very large case. What if you could pack your whole rig into something no taller than a DVD case. This is where Shuttle comes in; they have been designing barebone setups for 19 years that defy what most people say should fit into a small form factor case. In fact, they were the first company to produce a SFF system. Barebones of course means you get a case, power supply, and motherboard; leaving you to only get your HD, disc drive, CPU, Ram, and video card. Today we are going to look at their SP45H7 barebone, with a Intel P45 chipset and a SFF case I suspect this has the possibility to be a great lan party setup.

Shuttle packed the SP45H7 into a compact box with a easy to use handle on top. All of the information is on one single sticker on the bottom right of the front of the box. I assume that this makes it easy to use the same box on different models. For me it makes it easy to get my pictures and one place to find all the information needed. Due to the size of the sticker, only the most important information is included, but frankly, it's all you need to know. Inside the SP45H7 is protected from damage during shipping by foam and from scratches with a soft bag around the case. Being a prebuilt barebones the included parts are much less than you would expect from a normal case or motherboard. A small bag of screws, a few cables, and instructions in multiple languages keep it simple. Really, the most amazing thing to me was how small the box was, and with the included handle, you could easily pack your built pc in this box to transport to lan partys. 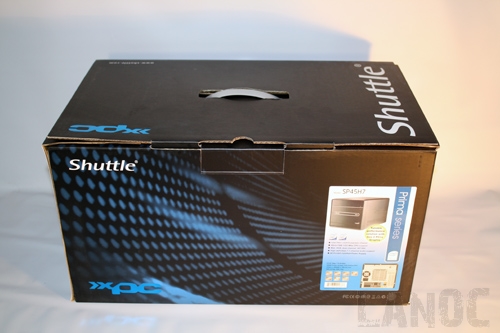 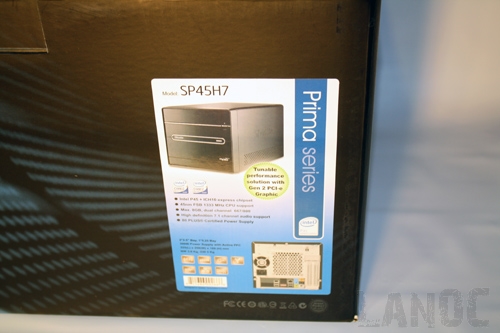 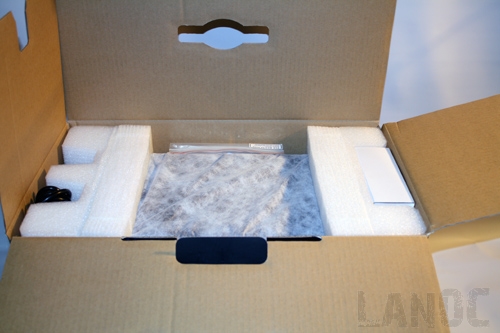 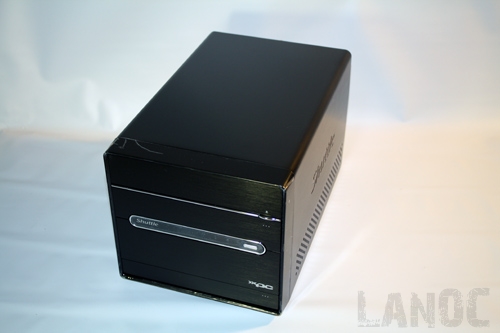 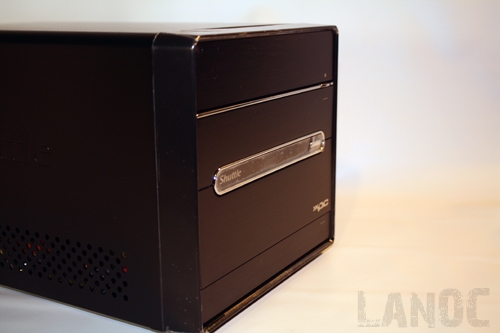 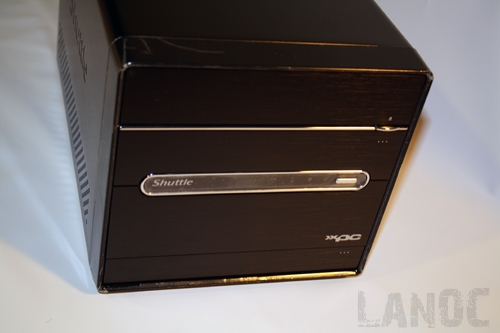 I was relatively unsure what to expect diving into this small case. I've put together countless computers but it seems like the cases keep getting bigger and bigger. Jumping in and taking the cover off I was surprised to see that most of the work was done for me. The barebones comes with the motherboard installed up to and including the front panel connectors. Installation is as simple as installing the CPU, RAM, Video card, Hard drive, and disc drive. Infact the only thing during the install that didn't drop in was the heatsink and frankly it still went smoother than 90% of the heatsinks I normally deal with. The Shuttle Form Factor may be small but it left for an amazing amount of room to work on everything. I am told that even though we used a smaller video card in our test setup, the newest video cards including Nvidia's 295 will fit in this setup. 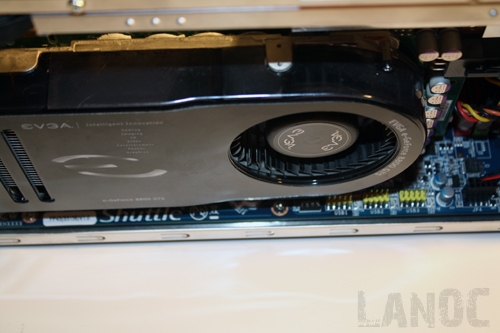 Because of the Shuttle SP45H7 being a barebones, testing it isn't as cut and dry as a heatsink or any other product really. In fact the SP45H7 is really four different products all together. I decided the simplest way to break it down would be to break our testing up by part. 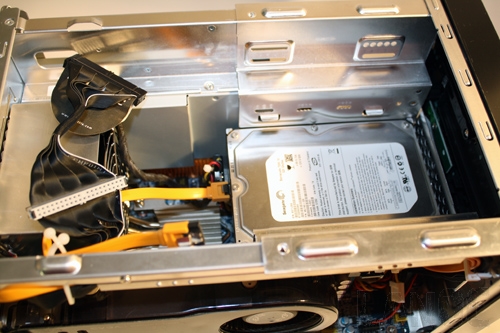 Generally, most of my case testing revolves around the install, cooling, and noise. In this case, the installation was extremely simple. Even if I were to have to remove the motherboard there would be ample room to do that. You can tell Shuttle has had years to perfect this compact design. One thing that stands out is how light weight the case really is. Part of that of course is due to its small size, but the aluminum frame plays a big part also. Being so light and small this really is a great case if you need to box it around a lot. 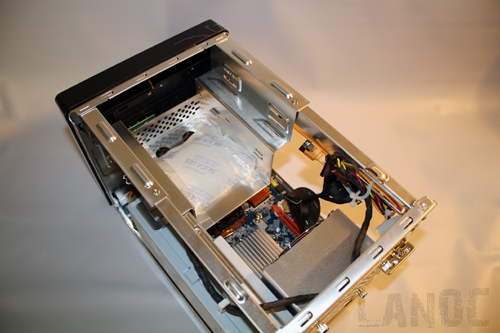 The outside of the case is simple but useful. The front panel looks simple with just the one power button and disc drive button, but behind hidden panels you will find everything else you may need. I was specifically excited about the included eSATA port on the front. With the possibility of only two hard drives internally some may need all of the plugs they can get for external storage. 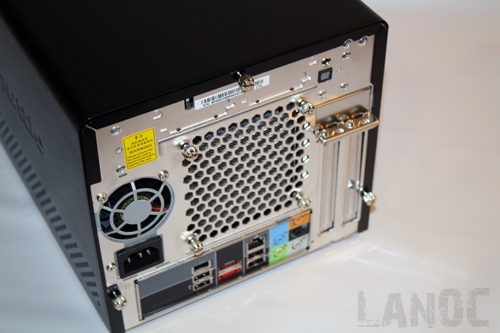 As for noise and cooling, the only real fans are on the heatsink and motherboard so the case itself is silent. The metal is somewhat thin so it's a good thing the noise it kept down because if you had a loud hard drive or disk drive I think it would carry through the thin skin. 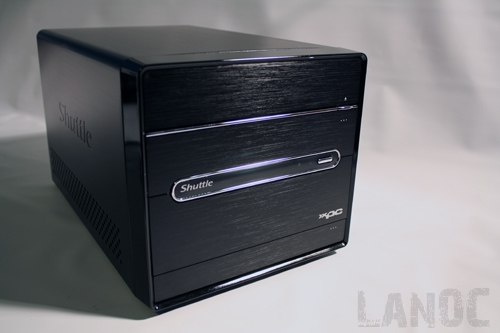 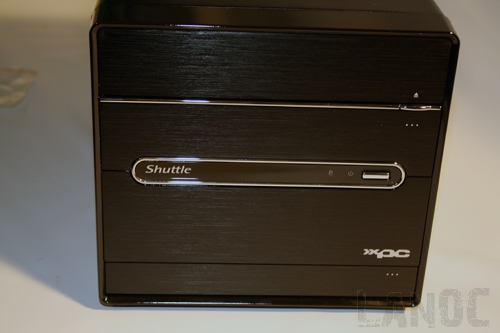 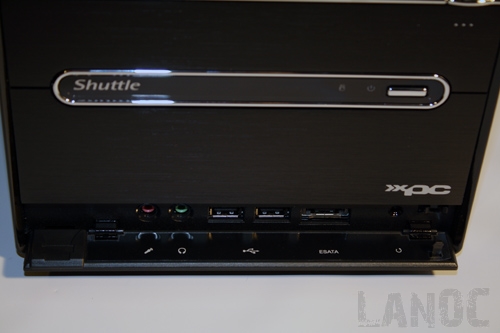 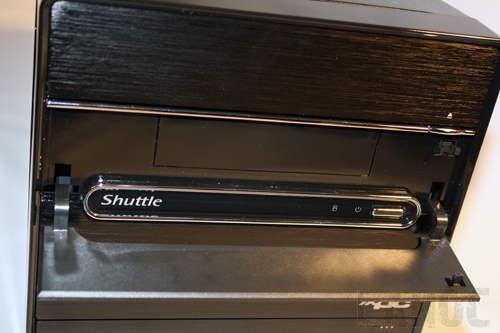 Considering the size of the case shuttle has to get creative about the power supply, if you tried to use a standard ATX power supply you wouldn't have room for anything else. What they ended up doing was using power supply's made to fit in a 1U server case. Not only are they very small, but they are designed to be very durable. The only downside to this situation is that the power output is somewhat limited. The SP45H7 includes a 300-watt power supply that has been 80 PLUS® certified, meaning the SP45H7 should be able to run a quad core and just about any current video card without worrys. Even though you won't be able to show off a high wattage power supply, it will get the job done. 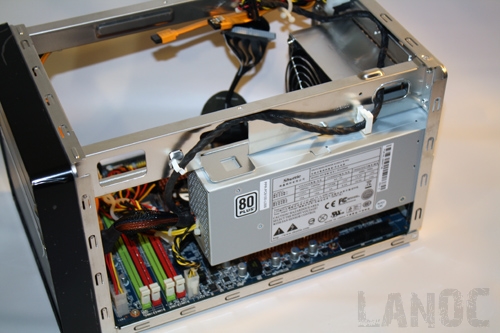 Of course an ATX or Mini ATX motherboard isn't going to fit in the SP45H7 that's why shuttle has motherboards designed specifically for its systems. I wasn't able to find anything to say for sure but the motherboard in the SP45H7 looks like a Gigabyte with the bright colors and yellow(ish) colored SATA cables although according to Shuttle they manufacture it. 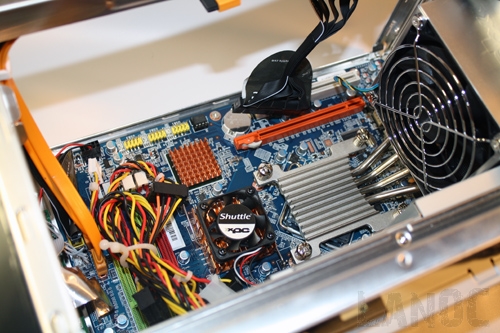 One of the big changes with this setup from past shuttle barebones is the ability to be able to run a dual slot video card without having to cut a hole in the side of the case. Of course if you run a dual slot card you loose the PCI slot. This really isn't an issue, the SP45H7 includes full 7.1 audio onboard. On the back I/O panel you will find four USB 2.0 ports, a Firewire port, two eSATA ports, and Gigabit network. As I talked about before I was happy to see the extra eSATA ports, they will all come in handy in the future if you need more storage. 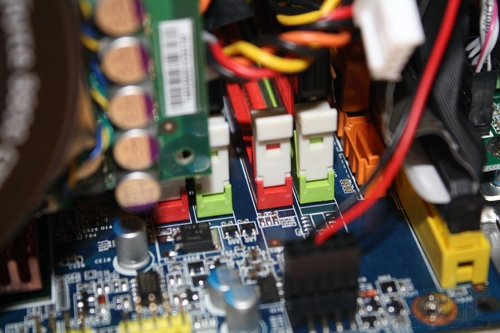 As a gamer and a major geek, I was very impressed when I looked into the Bios. I expected to find little or no options to be able to tweak the performance on the SP45H7. To my surprise I found the ability to overclock including adjusting voltages to a point. Even more impressive was the Dynamic Over-clocking that give you the ability to set the amount of overclock all the way to 20% more without needing to know anything about overclocking. This is a perfect option for someone looking for a small boost without the worry of damaging their new system. I was also very happy with the two different BIOS reset buttons included (one is on the bottom right side of the front of the case, the 2nd is hard to find. Its next to the I/O panel on the rear of the case) giving you a way to reset the BIOS during your overclocking without having to take the cover off of the case. Speaking of overclocking I had our Q6600 running at 3.0 without any voltage with just a FSB adjustment. I'm told that most people could expect 3.4, 3.6 with some tweaking. I unfortunately didn't spend very much time pushing it. 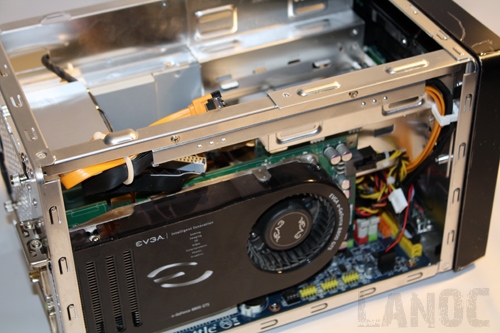 Considering the small form factor and the focus on the ability to be a gaming system the SP45H7 needed a great cooling solution. Shuttle came up with what they call the Integrated Cooling Engine or ICE for short. ICE uses convection cooling to dissipate heat away from the CPU, shuttle claims at up to 140W of cooling power (a point of reference, the new V10 hybrid cooler from Coolermaster claims 200 watts. The v10 is almost the size of whole SP45H7). Of course in order to get that performance the heatsink has to run its fan at high speeds with noticeable noise. I was mostly concerned with keeping the noise quite to silent  in our testing. This was important to me because a lot of people using the SP45H7 will be keeping it on their desk, any extra noise will be very noticeable on a desk. 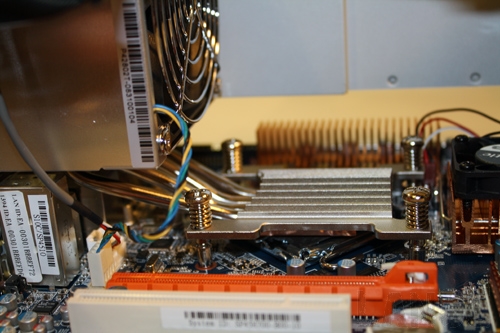 The cooling performance that I did see was very impressive considering the size of the heatsink and even more importantly the size of the case. My numbers were similar to running the Thermaltake V-1 on this same CPU in our test rig that has an extreme amount of airflow. The SP45H7's size limits the ability to have any bigger heatsink, but the performance they get is great. When I turned the fan up the temps dropped considerably but the noise was unbearable. Unless you end up with a highly overclocked setup you should have no problems keeping it cool while keeping the noise down. 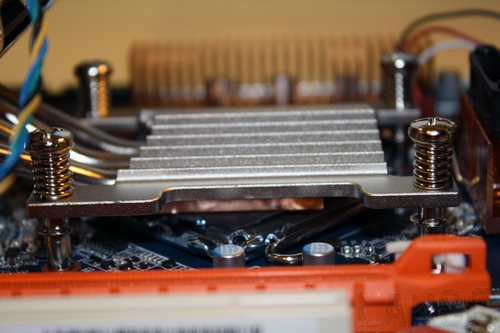 At the end of my time with the SP45H7 I have a newfound respect for shuttle computers for everyday use and gaming. Every small detail like the easy to use Bios reset, easy overclocking, great cooling, and room for a dual slot GPU prove that building a slick gaming rig was the inspiration behind the SP45H7. In fact even breaking everything down and evaluating each part I was still overwhelmed by the quality and attention to detail. The only thing I would like to see improved in the future would be the inclusion of a more powerful power supply. The 300 watts is enough to run most anything but will be pushed very hard if you happen to be running a top end system. Of course, if you read our page everyday you would know that Shuttles SX58H7 will be fixing this issue with a 500 watt power supply. Past that I even found the price to be reasonable when considering the included power supply, motherboard, case, and cooling. If you are into small form factor cases and gaming the SP45H7 is perfect for you; Frankly, unless you plan on running more than two internal hard drives this case is perfect for everyone. 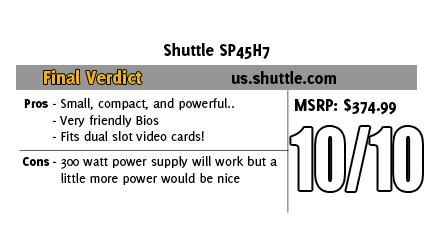 You might call him obsessed or just a hardcore geek. Wes's obsession with gaming hardware and gadgets isn't anything new, he could be found taking things apart even as a child. When not poking around in PC's he can be found playing League of Legends, Awesomenauts, or Civilization 5 or watching a wide variety of TV shows and Movies. A car guy at heart, the same things that draw him into tweaking cars apply when building good looking fast computers. If you are interested in writing for Wes here at LanOC you can reach out to him directly using our contact form.
Discuss this article
Log in to comment
Posts in discussion: Shuttle SP45H7