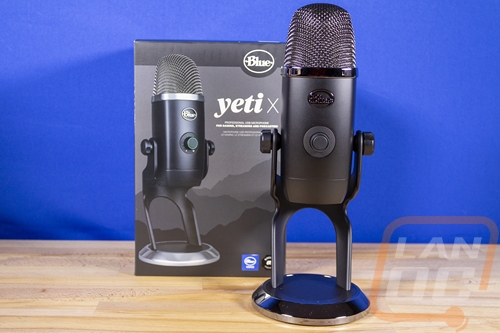 The Blue Yeti X comes with a surprisingly little amount of blue on the box, with just the logo down at the bottom for Blue Voice being blue. The background has various greys with a mountain range landscape and a full picture of the microphone taking up most of the front. The Yeti x branding is in a large font and is easy to spot as is the Blue logo up above that. They have a list of features on the side along with a zoomed in picture of the front control knob and then on the back they talk more about how the Yeti x is for streaming with logos for supported software like OBS and Xsplit as well as platforms like Youtube and Twitch. 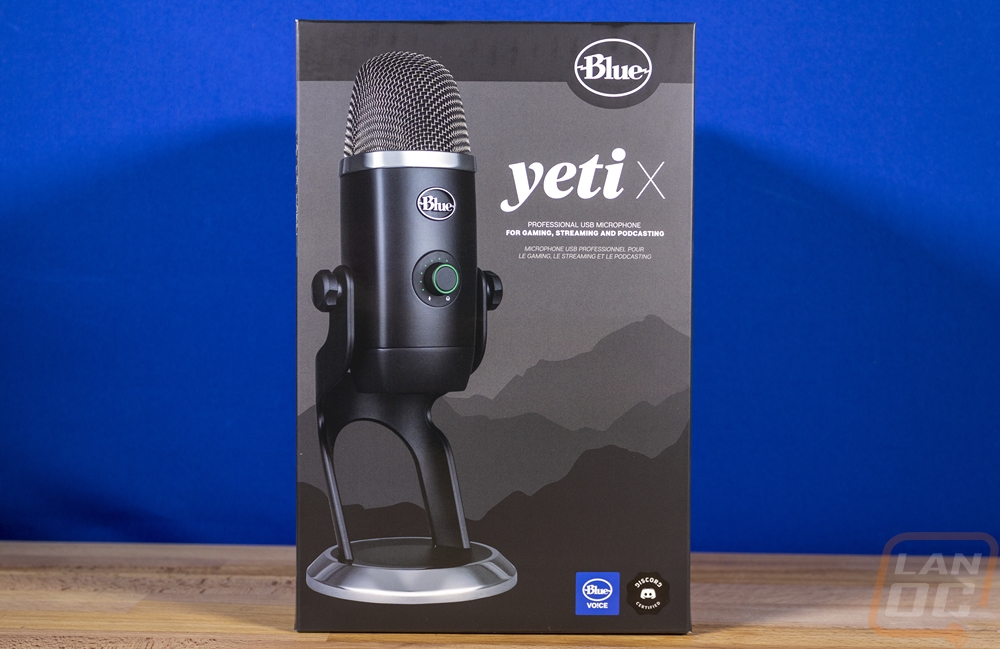 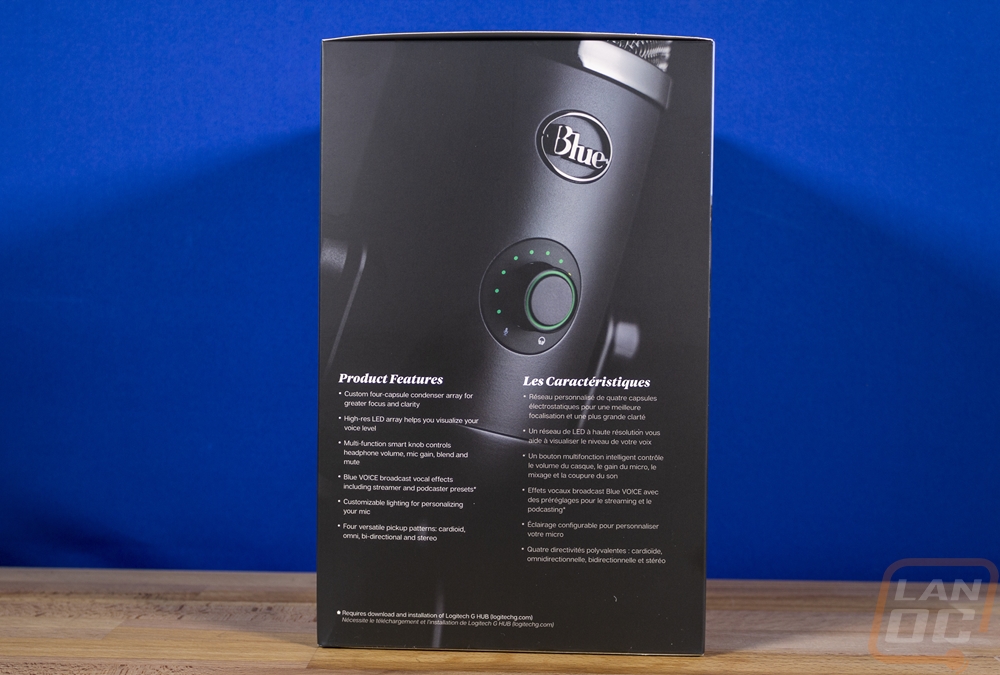 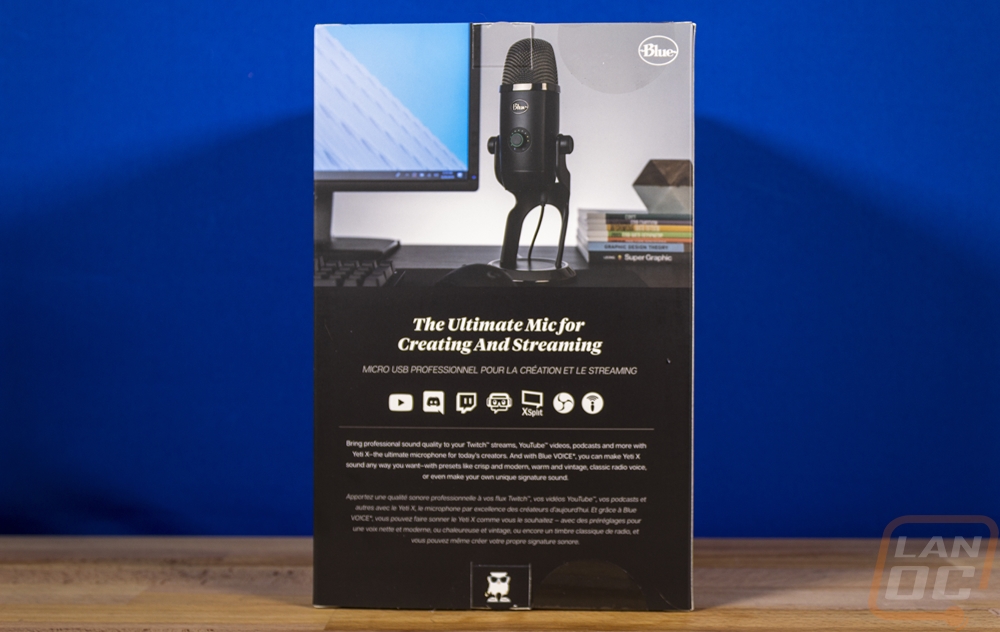 When you open the box up, or pull the box inside of the packaging box and open the lid you will find a foam backed piece of cardboard with a guide on using the Yeti X on top. They do a great job of using pictures to show things like how to position the microphone correctly and images to show the different microphone patterns. I like that this is the first thing you see as some of this would be ignored if even included in normal instructions and this is just about all you need to know about using the microphone. Up under that the microphone comes folded up and sitting in its thick foam tray. You can also see just how much foam that top foam/instruction guide has on the back, it even has foam that holds the microphone in place. They also have the cord tucked away in a back in the corner. 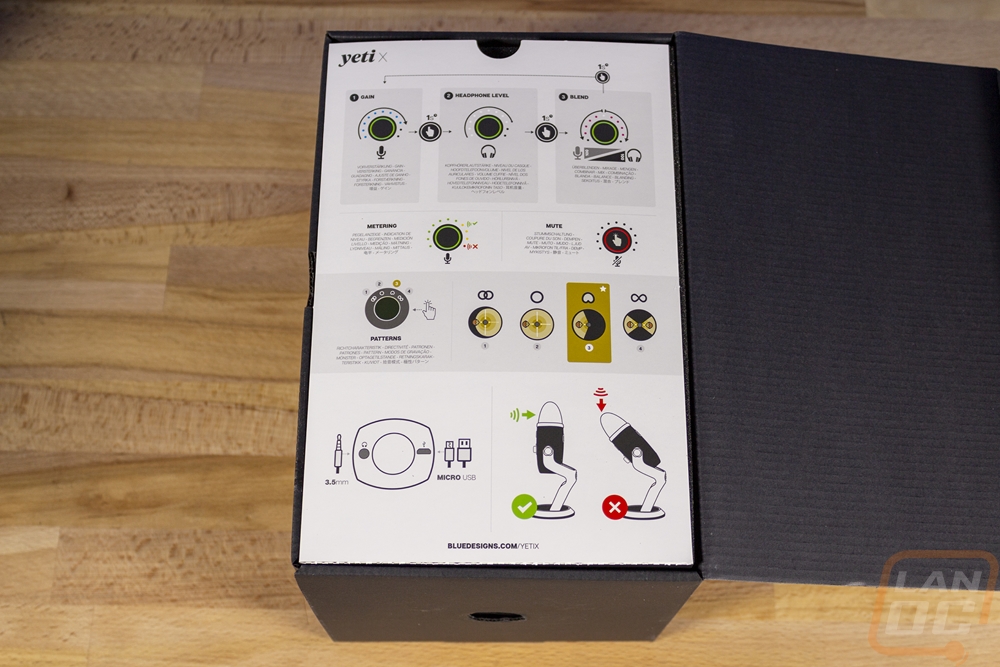 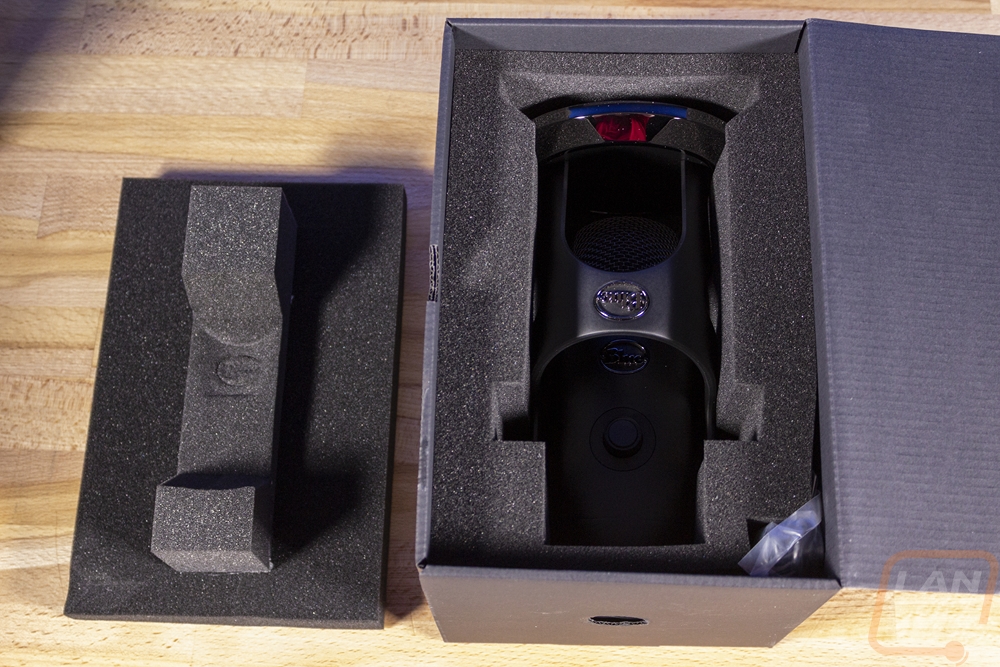 With the microphone out and flipped around to its full height you can see just how tall the Yeti X, which ends up being taller than the box it comes in. In total, it is 11.38 inches tall then including the base, it is 4.33’’ and 4.8’ wide and deep. The base is round, but the base also sticks out of the back to allow the microphone to clear when you fold it up so it is a little thicker than it is wide. It has that signature Yeti styling, nothing much has changed on that front with the stand looking like a guy holding the microphone up in the air. Only now the screws on the sides have larger bumps on them and the microphone is all blacked out. The microphone itself also has a little more of a squared-off look to it both in the housing and in the cover-up top where the old Yeti was completely round. 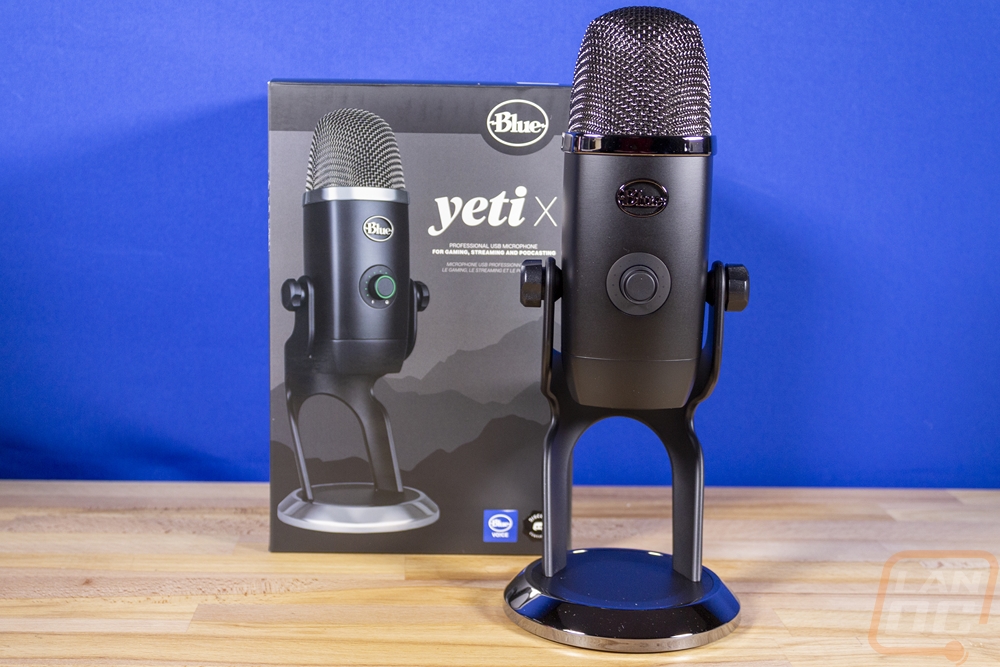 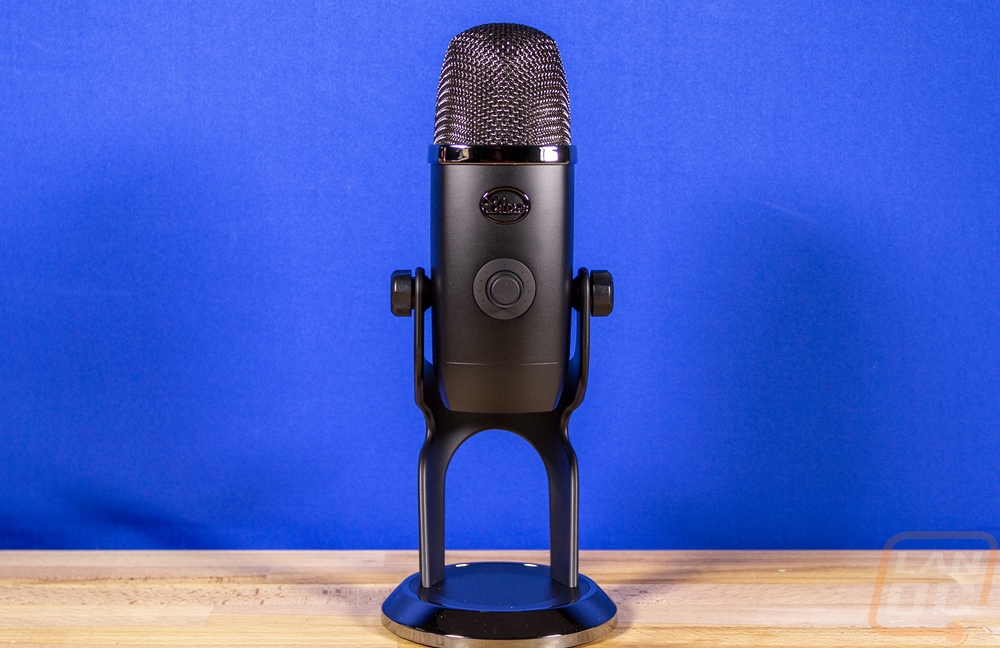 The base is extremely heavy and the arms that come up to hold the microphone are made out of a thick steal. They also have the Blue logo sticking out of them on the back of the Yeti X and then the base itself is thick steal with a lot of weight to it to keep things in place. The Yeti X does add a chrome ring around the bottom, but beyond that, it looks like the same design as the original Yeti. For grip, the entire bottom has a thin foam on it as well, though I would prefer this to be rubber. If anything is spilled the foam will hold it. But if I had to guess they went with the foam for at least a small amount of noise isolation from the table or desk it is sitting on, because the heavy metal stand isn’t exactly going to offer any isolation. 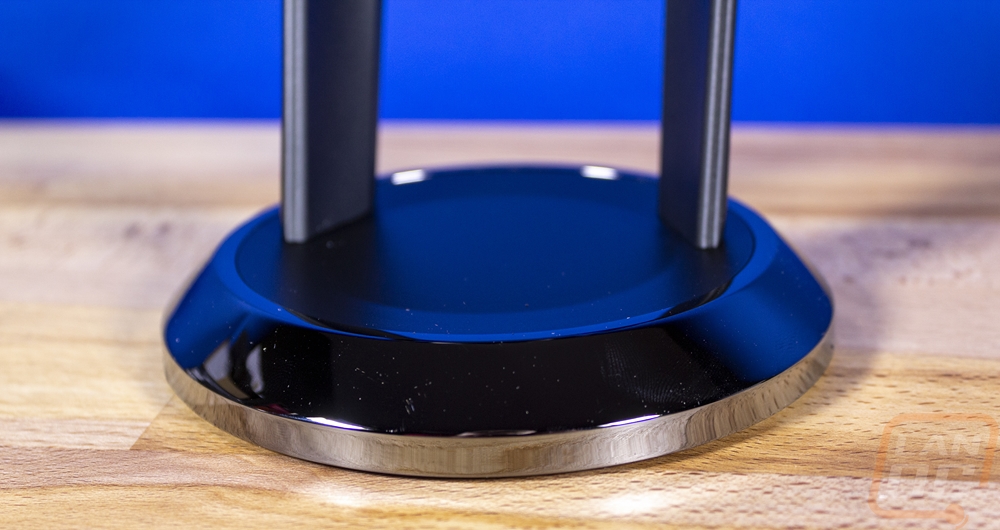 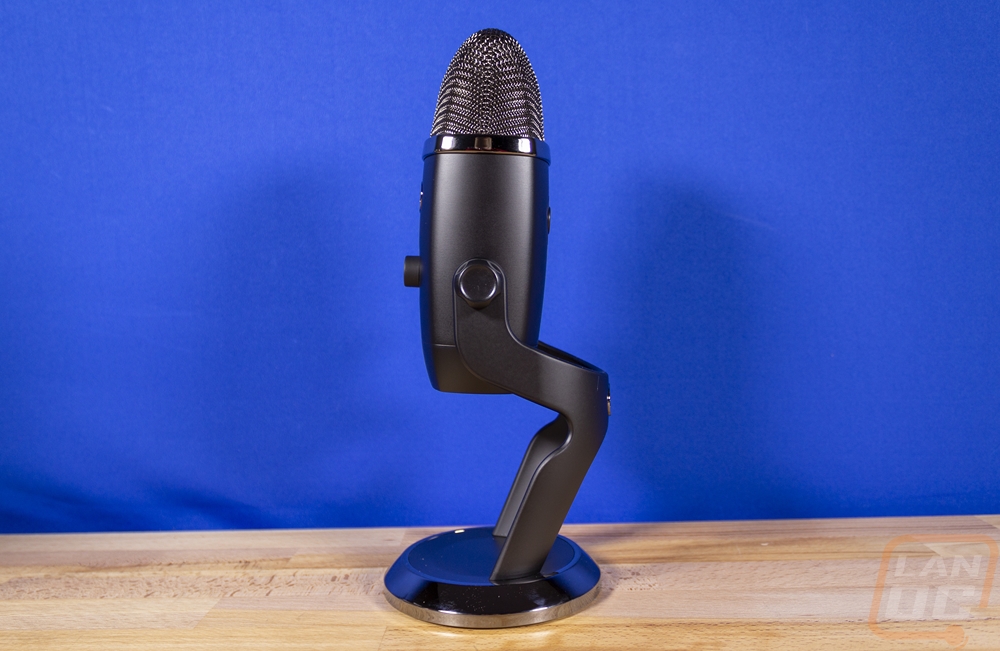 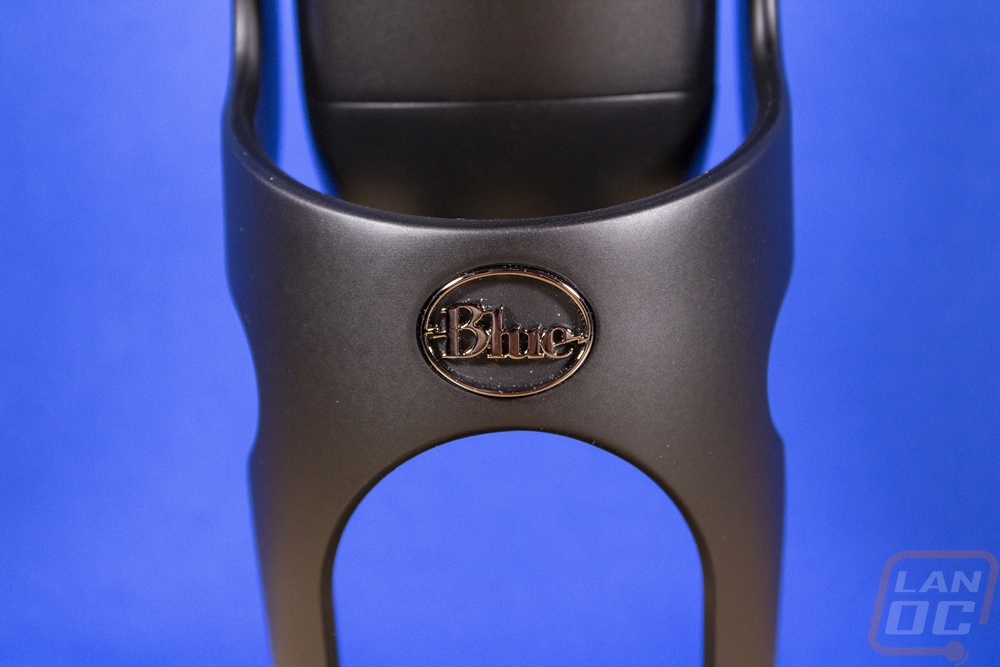 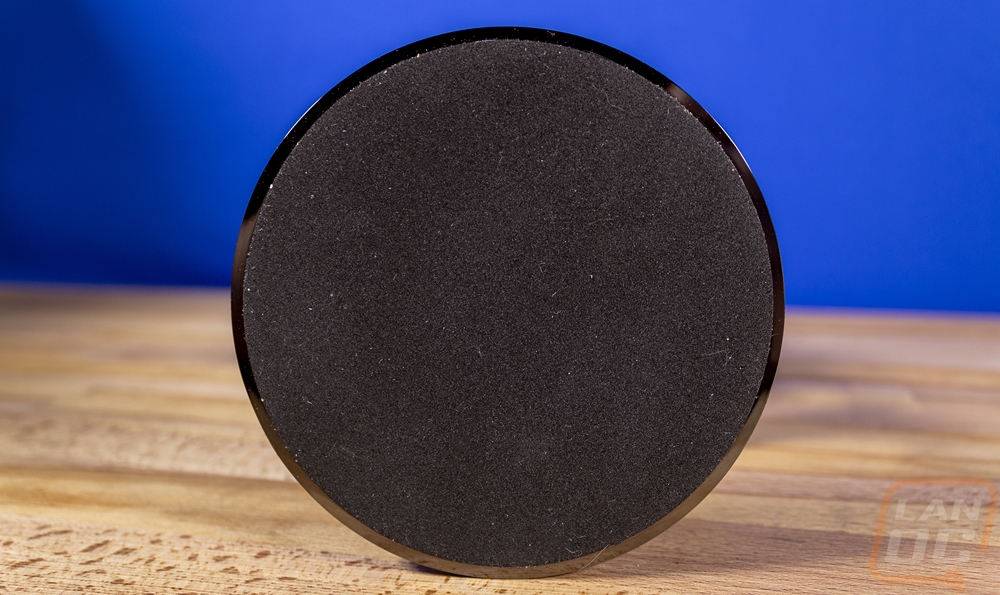 So there are two sides to the Yeti X as far as controls go. I like to refer to this as the inside because the main controls would face towards you. This side has a large Blue logo up top. Then they have combined what used to be a volume knob and then a mute button on the original Yeti all together. But the Yeti X does a little more. There is a knob and then a button in the center, then for lighting the button in the center has a ring LED around it and on the outside, there are small indicator lights all around the knob. The ring light around the center button powers on green to let you know things are running and when you mute switches to red. The outer LED dots have a few different uses. These show you your current volume setting for the microphone in one mode or can be used to indicate the current blend between the microphone and PC audio if you are using headphones plugged directly into the Yeti X. They also show you the current volume of the sound being picked up by the microphone and because they are RGB they have green, yellow, and red to let you know if you are peaking or too loud which is a huge addition. 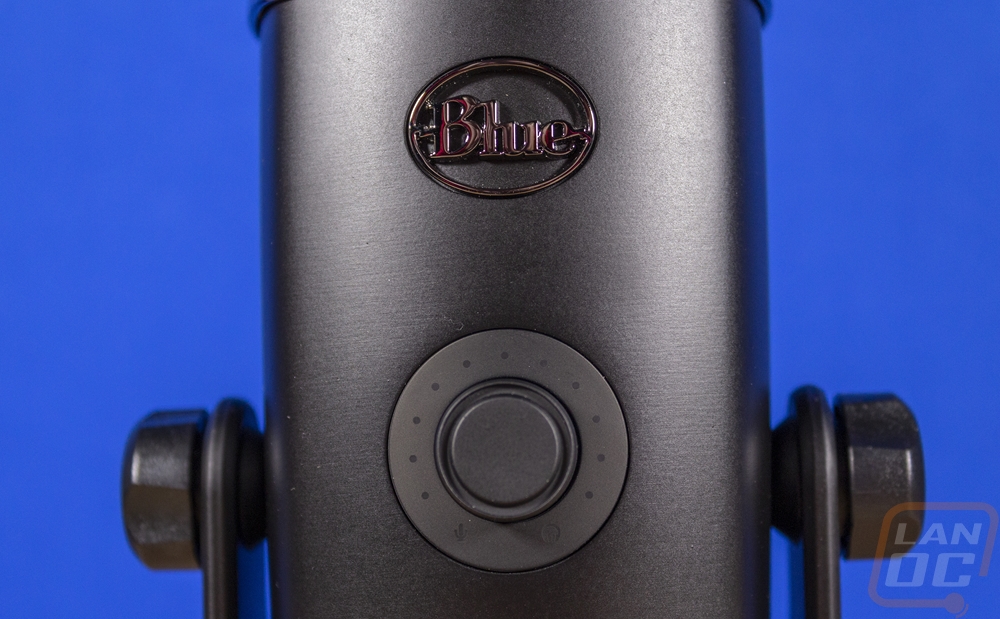 The backside of the Yeti X is if you were interviewing two people or a podcast what would face out. Because of that, the stand is more prominent here and that is where they have the Blue logo. This dies does have another button, though I personally wish this was on the other side because if you are the one monitoring volume you most likely also would want to know the status of this one. The button is the pattern button. The Yeti X supports   cardioid mode which is what you would use if streaming or using by yourself and it picks up just one direction.   Stereo mode pulls from the left and right sides for two-channel audio, which is good if you are recording music or ASMR. It has   an omnidirectional mode that picks up a full 360 degrees. This is ideal if, for example, you have a table with multiple people around it like doing a podcast with one microphone or a conference call. Then the last one is a bidirectional mode that pulls from the   front and back but not the sides. Which would be for a two-person interview/podcast or two people doing a duet. The button had four status lights around it with symbols for each of the modes that you can flip through. Which like I said before, would be better seen on the other side, hidden back here someone may have no idea they are in the wrong mode. 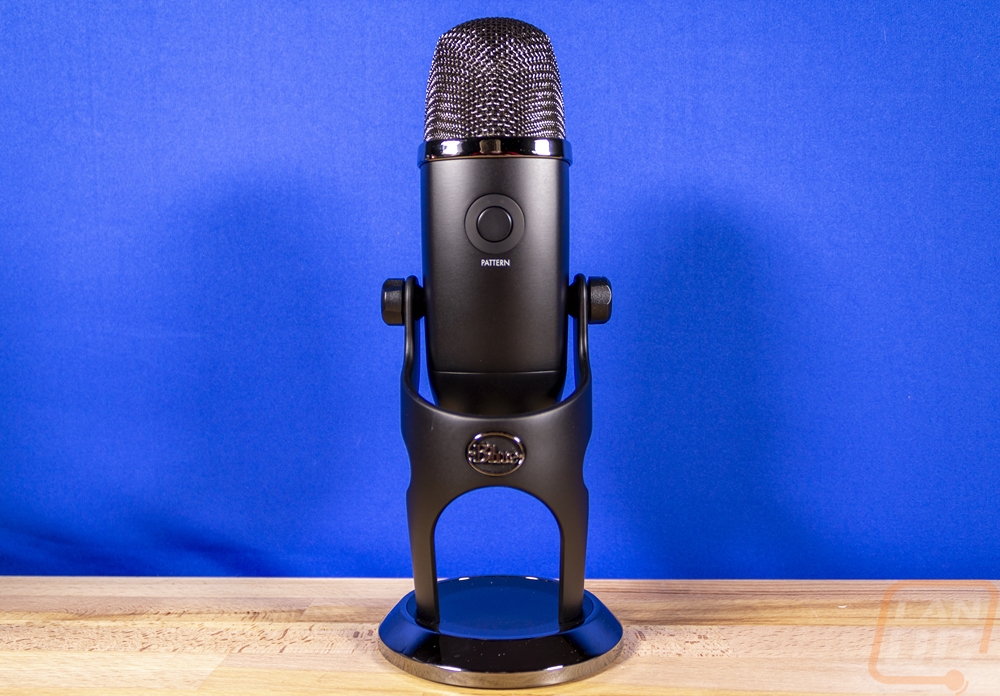 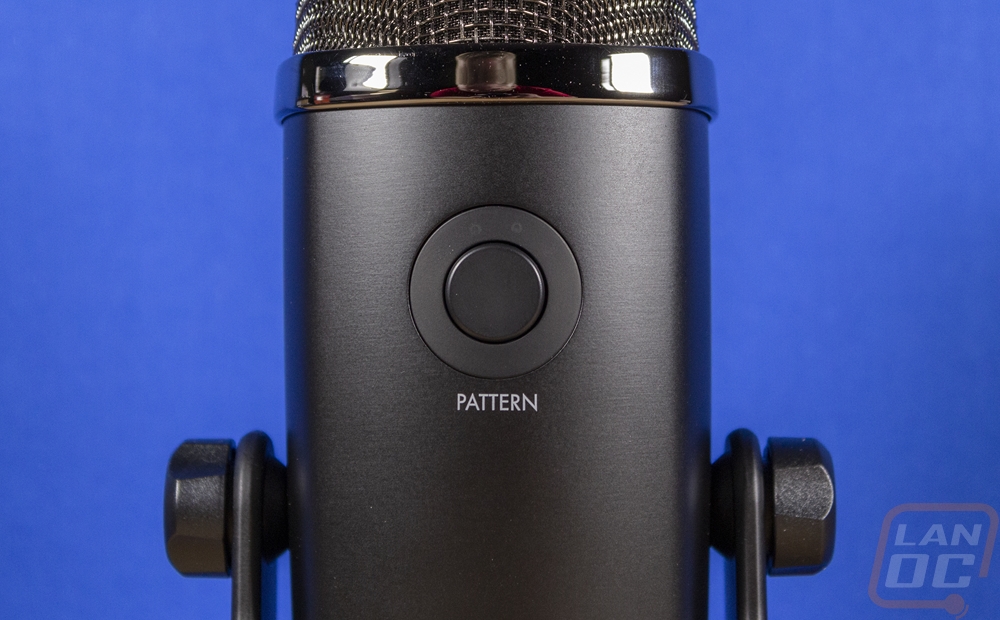 So like I mentioned before, the Yeti X does have more of a squared-off shape that carries over up into the grill at the top. The original Yeti has a perfectly round grill where this one is a little more defined. The outer grill is a weaved mesh that is chromed. If you look close you can see behind that it has a second finer mech as well to help cut out wind noise, at least some popping, and to protect the microphone itself from moisture. The chrome finish has a slight tint to it which goes great with the otherwise blacked-out look of the Yeti X and at the base of the grill, there is a chromed ring where it attaches to the black metal housing. 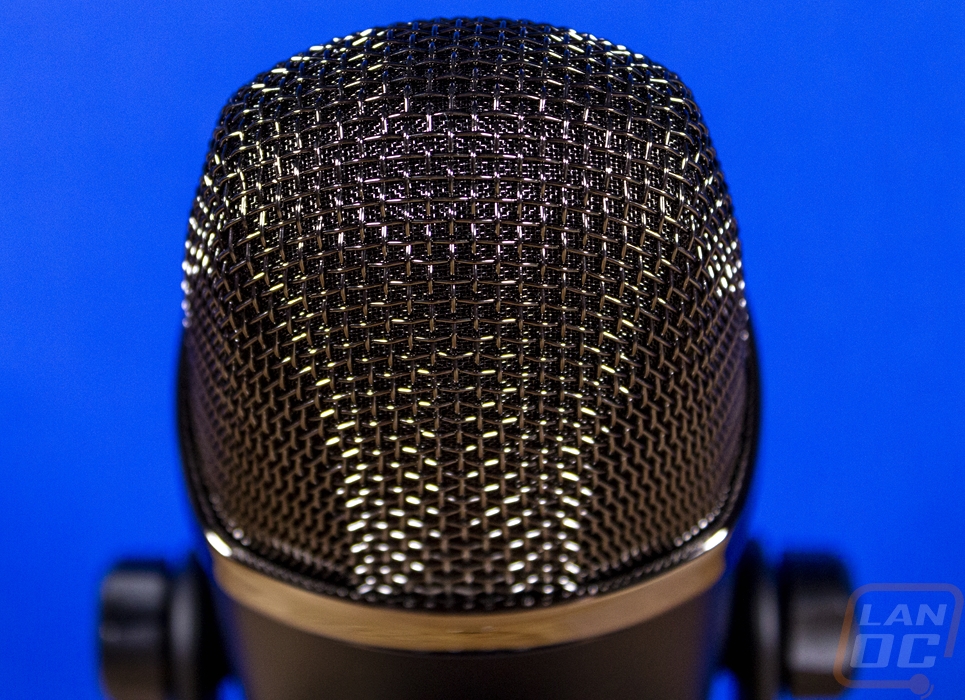 The bottom of the Yeti x feels a little like that closet in cartoons where everything is packed into and when you open it up it just covers the person. Blue has a note about the microphones FCC compliance here as well as information like where it is made (china), a manufacture number, and the power ratings for the power plug. There is also a small sticker with your part number and serial number as well. But then this is also where they packed the headphone jack and the USB connection. THEN if that wasn’t enough, in the center is a traditional microphone mount. This is for if you want to do a desk/table arm 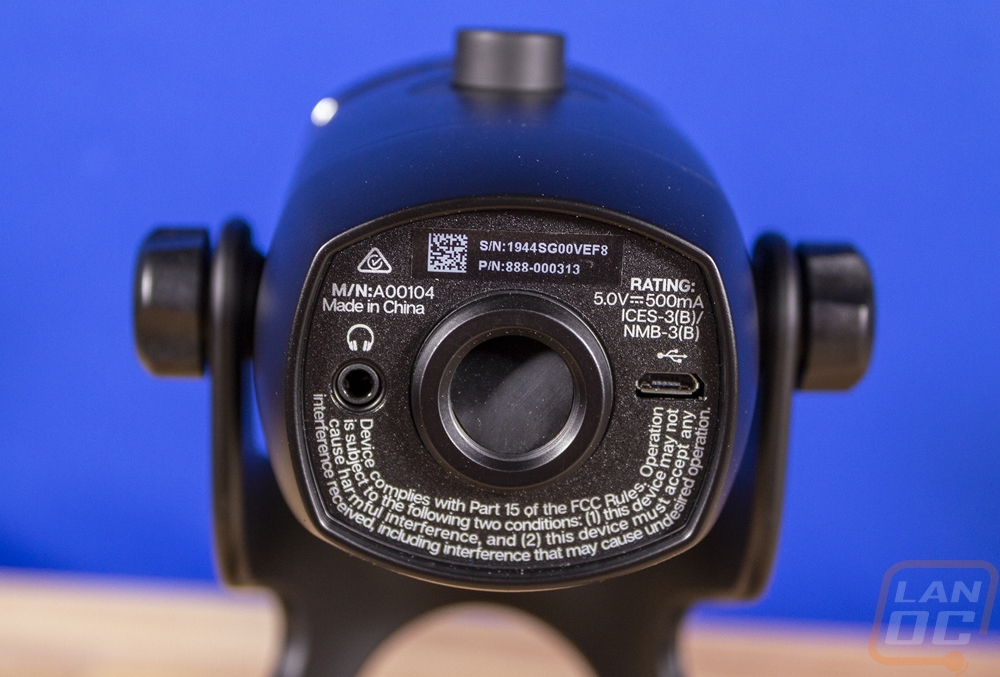 For the cord, the Yeti X comes with a 2 meter long USB cord which is just over six and a half feet long for those of us who use appendages for measuring. I was expecting to see Logitech’s touch here wish maybe a sleeved cord or even their weird winged USB connection but this is just a standard thick rubber cord. It has a type-A connection on one end to plug into your PC and a micro-USB on the other. This is a change from the original Yeti which had an older mini-USB connection. Those were known for issues, but the thicker mini plug is a little stronger so I’m surprised they switched. Type-C may have been a better option for both strength and also to make hookup simpler as well when you don’t have to worry about the direction of the plug on the bottom where you can’t see.