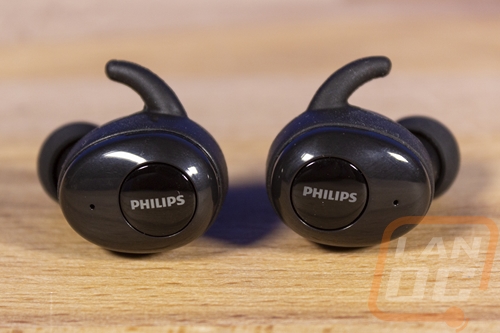 It's funny how sometimes I’m right on the cutting edge with tech but then when it comes to wireless earbuds or even Bluetooth speakers I’m late to the party. I’m not an ultra-active person so as much as wireless earbuds have interested me, it wasn’t until I started having issues mowing with my wired earbuds which I’ve been doing for years I finally started considering something wireless. Frankly I’ve had my wired earbuds fall out more times than I can count, so dropping a tiny wireless earbud into the lawn was always a concern. Well Philips did a good job of comforting me with their UpBeat Wireless Earbuds. In addition to the normal rubber eartip holding everything in my ear, they also have a small rubber hook that locks the UpBeats into your ear from two locations for a little extra security. They also ended up being surprisingly comfortable and I’ve never been a huge fan of earbuds.

The 3-hour battery life of the earbuds themselves ended up working out really well for my lawn care needs and having the carrying case storing an additional 9 hours of battery life ends up giving you a lot of listening time before having to dig out a cord. Speaking of the cord, I think the cord included was a little useless in length for me, thankfully I keep a Micro-USB charger at my desk. I would still prefer a Type-C charging connection given how popular Type-C is now with phones. If I plan on using the UpBeats on the go to the point of recharging the carrying case I would actually have to pack a Micro-USB cord where both my wife and I have Type-C cords in our cars for our phones.

Audio performance was good but not spectacular. Bluetooth was the main limitation here though I think the UpBeats could use a touch more bass overall. Turning things up in the EQ on the S10 helped but I had issues with the Bluetooth on the S10 that didn’t replicate on the S9/Note10/or OnePlus 6t.

What really impressed me with the UpBeats was how simple they were to use. Pulling them out of the case turns them on and putting them back in the case turns them off. With the built-in battery in the case, this also keeps them fully charged at all times and I almost never had to touch the side buttons unless I needed to pause my music. Not having wires was immediately easier than my wired earbuds while mowing. Getting tangled wasn’t a concern anymore and that happened all the time. I also didn’t have to be careful to tuck away extra cord in my picket or put my phone in so it wouldn’t damage the cord. More importantly, with most of my phones moving away from the headphone jack in general. I don’t have to worry about that when buying a phone though I would still prefer to have better wired audio quality as an option. My only other issue or complain was a small one. With the cord and extra eartips included with the UpBeats I didn’t really have any place to store those once I pulled everything out of the box and those extra eartips are tiny and easy to lose. A small compartment for them in the included case would be nice, or a small bag to put everything in would be helpful.

When it comes to pricing, I knew that the UpBeats weren’t going to be priced like a cheap set of earbuds. But as someone who has picked up a few different pair of quality earbuds in the past the $79 price on Amazon right now was actually a lot better than I expected. A look around on Amazon did show a long list of off-brand knockoffs priced a lot cheaper, but when you get into the known brands the UpBeats are actually priced a lot better than most of the other options and almost $100 less than the latest Airpods! Overall I would recommend the UpBeat SHB2505’s but I do want to spend some more time with other models to explore the performance possibilities. Philips does have a similar set with a larger carrying case that ups the battery backup up to levels high enough to recharge your phone if needed as well if you need it. 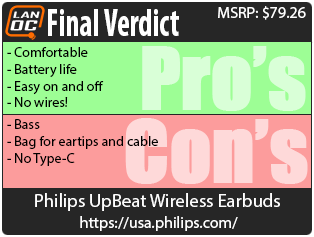 You might call him obsessed or just a hardcore geek. Wes's obsession with gaming hardware and gadgets isn't anything new, he could be found taking things apart even as a child. When not poking around in PC's he can be found playing League of Legends, Awesomenauts, or Civilization 5 or watching a wide variety of TV shows and Movies. A car guy at heart, the same things that draw him into tweaking cars apply when building good looking fast computers. If you are interested in writing for Wes here at LanOC you can reach out to him directly using our contact form.
Discuss this article
Log in to comment
Posts in discussion: Philips UpBeat SHB2505 Wireless Earbuds