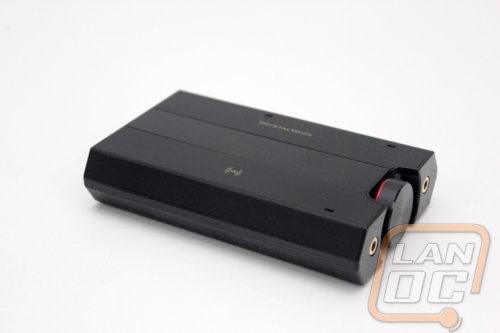 Much like the Sound Blaster E1, I feel like the E5 come into the market as something a little bit different, basically creating its own market. There are a few portable DACs on the market and I think two of them even include battery power like the E5. But Sound Blaster has taken that even farther with things like easy to use Bluetooth support. On top of that none of the other options have anything like the mobile app and Windows software that lets you log into the E5 and change pages and pages of settings. What they have done with the E5 is bring the idea of a portable DAC to an all new level and made it friendly for everyone to use. I mean just look at all of the connection options you have. On top of being able to hook up to a PC or laptop via USB. You can also hook up to any device using a 3.5mm audio cable or if you want an optical cable. When it comes to hooking up to a phone you have the 3.5mm audio cable option like the E1, but then you also have a few different Bluetooth audio options as well as the ability to hook your devices charging cable right into the USB port on the E5 and have it play audio through that. It is almost too versatile, I’m not sure if I want to set the E5 up on my main PC, pack it up with my laptop, or take it along with me with my phone/tablet. Using this with my main PC really came in handy when I was streaming music from my phone but had it plugged into the PC. It mixed the audio for me so I could hear my music but my in game audio was still playing through as well.

Really I only found one potential downside to the E5. The price is without a doubt going to be an issue for mobile audiophiles who don’t have the deepest of pockets. That isn’t to say that the E5 isn’t priced well, frankly it is spot on with the other competing portable DACs and the E5 has a whole bunch more features. With that in mind it is actually a good value compared to the competition, I just worry that it might out of reach for some of the people who would use it the most (younger active techie audiophiles). That said I don’t think I could go back to the E1 after listening to the E5. In fact I might have to look at a stationary DAC for my main PC while I pack this along with me when on the go. I think that X7 is calling my name. 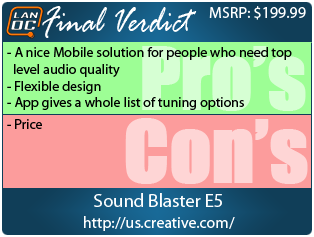 You might call him obsessed or just a hardcore geek. Wes's obsession with gaming hardware and gadgets isn't anything new, he could be found taking things apart even as a child. When not poking around in PC's he can be found playing League of Legends, Awesomenauts, or Civilization 5 or watching a wide variety of TV shows and Movies. A car guy at heart, the same things that draw him into tweaking cars apply when building good looking fast computers. If you are interested in writing for Wes here at LanOC you can reach out to him directly using our contact form.
Discuss this article
Log in to comment
Posts in discussion: Sound Blaster E5