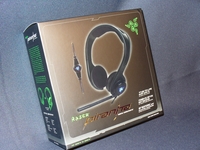 When it comes to gaming Razer has developed a brand that people have come to rely on and trust. Recently they have been trying there luck in the difficult sound market. Today we are going to take a look at their new Piranha Gaming Communicator. We are going to find out if these live up to the Razer name.

(koolaid took the picture of garfi3ld wearing them) 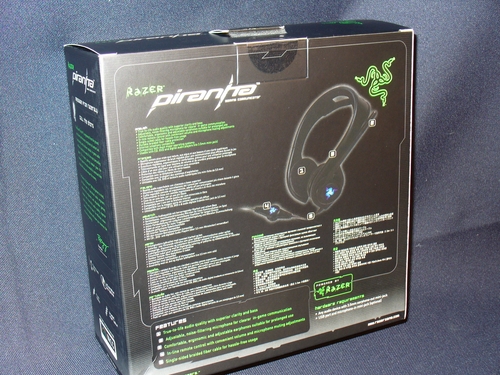 Razer always puts a lot of thought and care into their packaging, the Piranha is no exception. The box itself is flat black with a picture of the headset on the front. There is also the triple snake Razer logo and a small list of features on the front; “true to life audio quality” “noise filtering microphone”, and “ergonomic and adjustable earphones”. The back of the packaging included a more detailed version of the same list in 11 different languages. They have also listed the hardware requirements as any device with a 3.5mm speaker plug, Mic, and and (optional) usb plug. 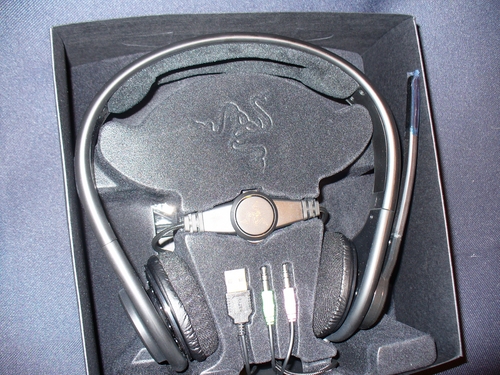 Inside the box we found the headset was mounted inside a velvet lined package. The packaging was layout out in a way to feature each of the three plugs, the inline volume control clip and the headset all at the same time. There is also the Razer triple snake imprinted in the packaging.

I have the Piranha’s hooked up to the Razer Barracuda AC-1 sound card to make sure we have a clean sound from the start. While listening to a few cd'ss the sound overall isn’t bad. The bass seems slightly muffled and the mids seem to dominate most of the sound. I don’t expect them to sound like high dollar cans, but they will do for a few Ronald Jenkees jam sessions in between rounds. I’ve been using the Piranha headset with a few different games. As I’m sure a few of you might have guessed, the first thing I did was jump in a match of TF2. The first thing I noticed is how well I can pick up the direction of the sound. This is even more noticeable when playing COD4; you can hear the footsteps when someone walks up behind you. This is also very noticeable when listening to the Virtual Barber Shop, considering the headset isn’t open air it does a good job of making you think they are in the room with you. The microphone is conveniently attached to the left side so that it will spin up and out of the way when it’s not needed. It is placed far enough out of the way that you can drink or eat without worried about sticking your microphone inside your ham sandwich. Everyone in game could hear me clearly and I had no problems setting the microphone levels in steam or in windows. 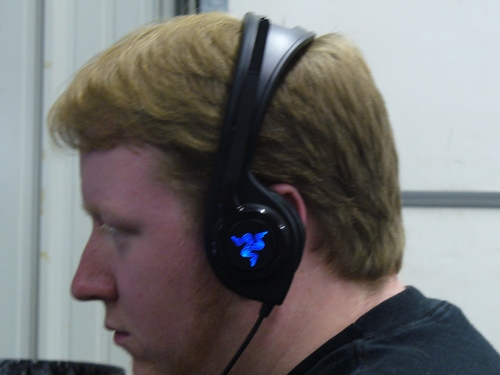 The headset fits my head perfect at the lowest settings. The problem with that is frankly, I have a big head. I had a few other people try it on, it fit great for some but some of the people with smaller heads had problems with it being too big. I love the felt padding on the underside of the top, with it I can’t even feel the top resting on my head. The headset fits on my ears comfortably. After over an hour or so of gaming the headset can start to irritate your ears. This is a problem I’ve found with all on ear headsets so it might stem from my ears being over sensitive. I prefer over the ear cans to keep the comfort up for long gaming sessions. If you normally like on ear headphones you may not have any problems with the Piranha's. The Piranha’s do a good job of keeping some air flow to prevent your head or ears from getting too hot. 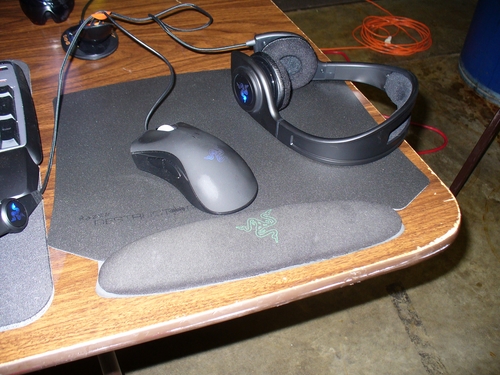 Razer has produced a headset that is perfect for gaming. They don’t perform as well when listening to out of game audio, but that is to be expected with gaming headsets. The clip on sound and mic mute control is a nice feature, the blue backlit triple snake on it adds to the style. Speaking of the glowing triple snake, they have included this on both ears. This makes for nice eye candy when the lights are turned down and matches well with the same glowing triple snake on Razer mice. The issues with the Piranha not fitting smaller people is an issue to consider. But if you’re lucky enough to have a big head (like me) you will be rewarded with an overall good gaming headset. 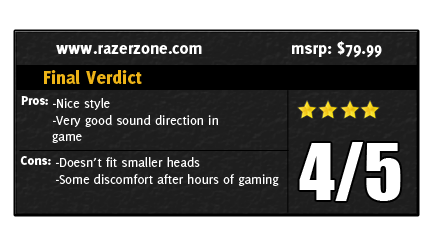 You might call him obsessed or just a hardcore geek. Wes's obsession with gaming hardware and gadgets isn't anything new, he could be found taking things apart even as a child. When not poking around in PC's he can be found playing League of Legends, Awesomenauts, or Civilization 5 or watching a wide variety of TV shows and Movies. A car guy at heart, the same things that draw him into tweaking cars apply when building good looking fast computers. If you are interested in writing for Wes here at LanOC you can reach out to him directly using our contact form.
Discuss this article
Log in to comment
Posts in discussion: Razer Piranha gaming headset