So like every 3dprinter that comes into the LanOC office, I spent a lot of time with the Prusa i3 MK2S before sitting down to write. You can see from all of the print pictures that I’ve run through a few different spools and I went through my share of issues initially getting started. The issue with the LCD and the wrong stepper motor both extended my wait to even get started testing and then I had issues with settings twice and two issues where I needed to print parts to make the printer work how it should. The two parts were a bummer, for such a great printer I do think the filament hanger design could use some tweaking.

As for the build, even those two issues didn’t deter me. This has to be one of the easiest full kit printers you can get. Sure there are some that just take a few minutes to put together, but the MK2S does require the time to build. But Prusa has put together things like the hotend, the power supply, and the print bed to make sure no one needs to solder anything. Then add in steppers with the exact cord lengths and extremely detailed instructions anyone could build this and be up and running. The build time was about 8 hours for me, cutting out a few hours from my Rostock build time.

Once up and running correctly I almost never had to make any real adjustments other than temps, layer height, support, and infill. The ironic thing, of course, is a complained that the new Prusa Control software only lets you do those things. But I did need to adjust my extruder rate, if it wasn’t for that it would have worked perfectly for me. It's really clear that Prusa has been working hard on the software side of things and I’m excited to see what they end up doing. The current setup is a little patched together and is missing a few basic features. The new software is looking good but has no control. Combine the two and we would be rolling.

As for printer performance, I found the Cartesian design is slower than I am used to with my Deltas. However, the prints do look great. The noise level of the printer overall is much better than what I’m used to as well with the Rostock. I think I am a lot more likely to use the Prusa for most small prints because of the noise and because I know it will work but I would never give up my Rostock as well. The large build surface and the print speed is night and day. I did the one large print on the Prusa and it took almost two days.

The Prusa i3 MK2S also stands ahead of most of the market because of their use of name brand components were similar printers, especially Prusa knockoffs use cheap electronics. With the MK2S you get a genuine E3D hotend, something a lot of people upgrade their printers to later and a real RAMBo controller. The 3d printed parts used in the construction help keep the price down, but I will admit I was spoiled with all of the injection molded parts from my SeeMeCNC printers.

As for the price, the kit is going to run you $699 and a pre-built machine is $899. I would highly suggest going with the kit, getting to know how everything is built is worth the build time, not to mention the money saved. At that price it does stand above all of the cheap Chinese clones using Prusa’s design so you have to remind yourself that you are paying for quality components, making sure the money goes to the original designer, and great service. They even wrote the book on how to print, literally. This is priced better than the Rostock Max v3 but you do have to figure in the additional build area that the delta gets you. Overall the i3 MK2S seems to be the sweet spot for quality while still being in the range of most people price wise. You can spend a lot more for a lot more build space or for even better construction or go with a super cheap printer. The Prusa comes in right in the middle. That is why they have had a long wait time forever. With their recent move to a larger building and expanding their print farm and staff the wait times have dropped, but do still expect some time before you get your printer. 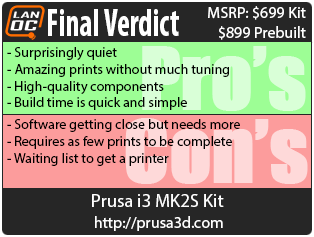 You might call him obsessed or just a hardcore geek. Wes's obsession with gaming hardware and gadgets isn't anything new, he could be found taking things apart even as a child. When not poking around in PC's he can be found playing League of Legends, Awesomenauts, or Civilization 5 or watching a wide variety of TV shows and Movies. A car guy at heart, the same things that draw him into tweaking cars apply when building good looking fast computers. If you are interested in writing for Wes here at LanOC you can reach out to him directly using our contact form.
Discuss this article
Log in to comment
Posts in discussion: Prusa i3 MK2S Kit

We have 954 guests and one member online