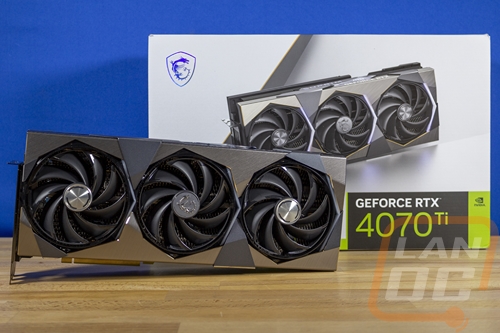 Now some people don’t need a video card for gaming, they need the processing power for rendering or 2D/3D production, or in some cases people who game also do work on the side. So it is also important to check out the compute performance on all of the video cards that come in. That includes doing a few different tests. My first test was a simple GPU Compute benchmark using Passmark’s Performance Test 10 and the RTX 4070 Ti Suprim X edged out the TUF 4070 Ti by 9 points. Both cards sit out in front of both of AMD's new cards as well as the 3090 Ti from the last gen. 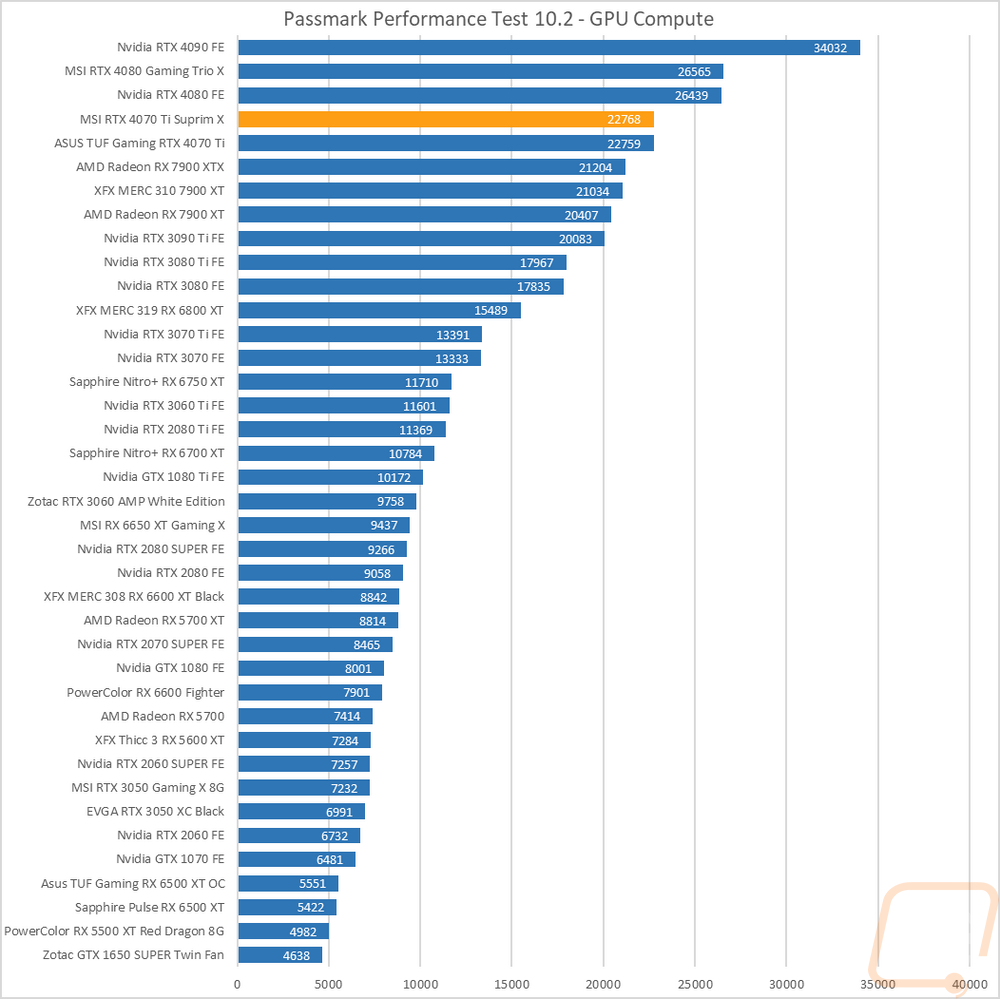 Blender is always my favorite compute benchmark because the open-source 3D rendering software is very popular and it isn’t a synthetic benchmark. With the latest version of Blender, they redid the benchmark so we now have a new test that runs three different renderings and gives each a score. I have all three stacked together so we can see the overall performance. The RTX 4070 Ti Suprim X edged out the TUF 4070 Ti once again in all three of the Blender renders which once combined puts 55 points between them. Like in most of our tests though the overclock difference is small compared to the gap between them and the 3090 Ti which they are in front of and the even bigger gap between them and the RTX 4080 which is ahead of them. 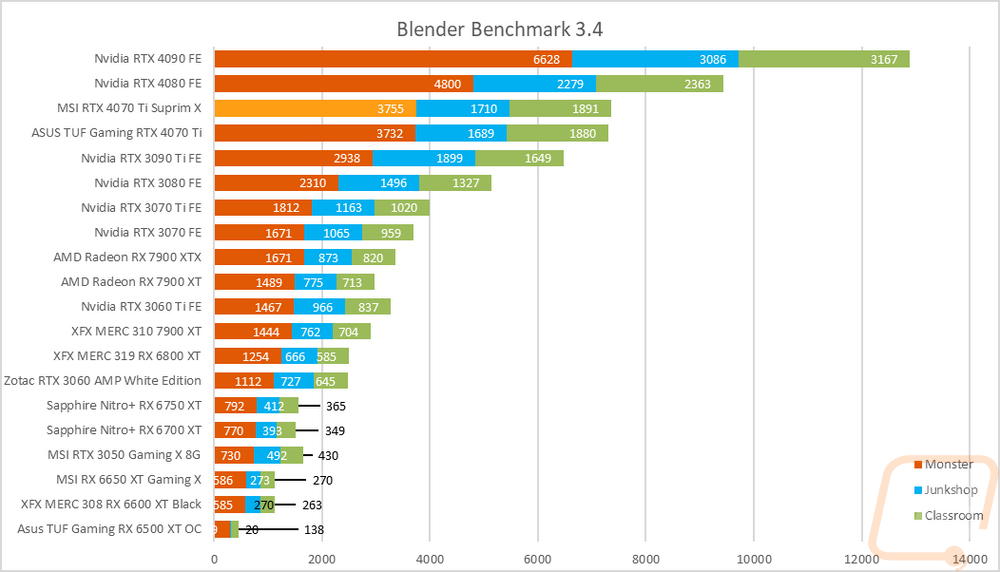 For CUDA-based cards, I also check out OctaneRender performance using their OctaneBench 2060.1 benchmark which allows me to check out both RTX and non-RTX rendering performance. Here the RTX 4070 Ti Suprim X edged out the TUF 4070 Ti by two points in the RTX test and a half point in the total score without RTX. Both cards were just barely ahead of the RTX 3090 Ti in the no RTX test but stand out in the RTX test compared to last generation's flagship. 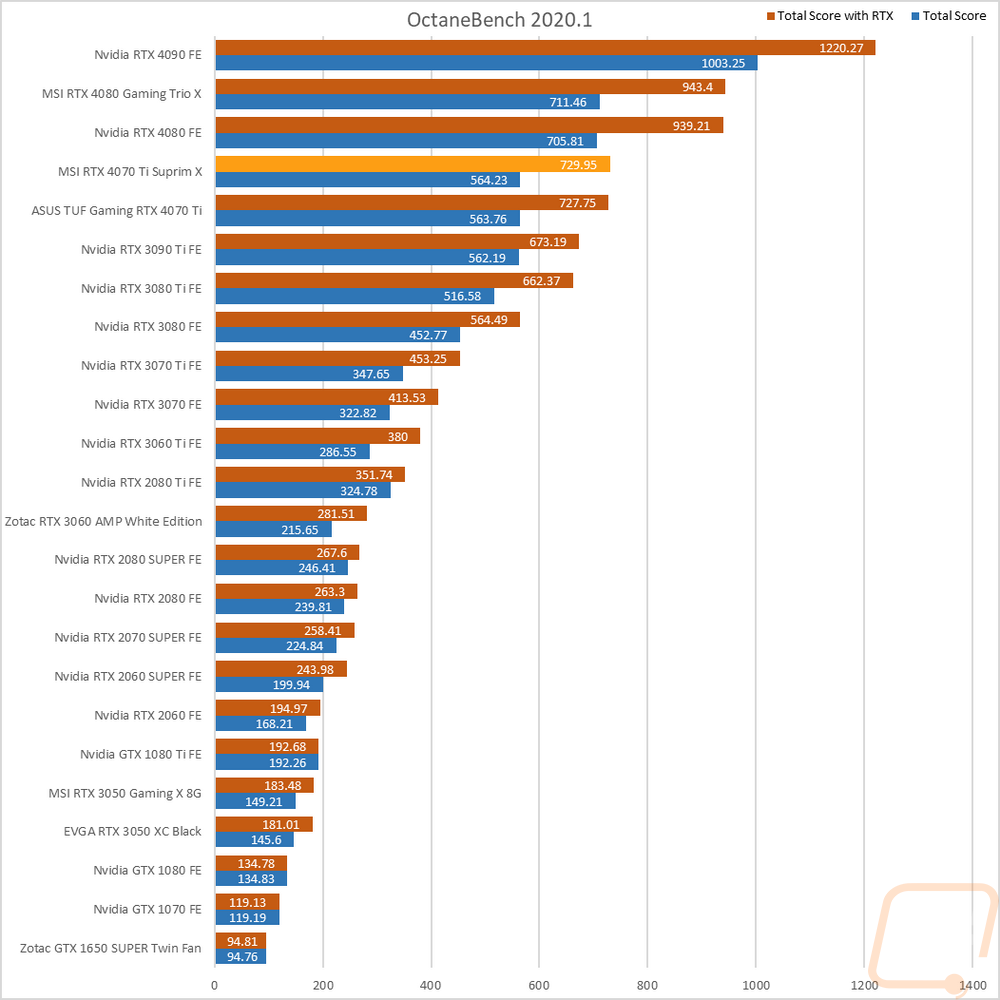 For an additional CUDA-based test I also ran V-Ray Benchmark 5 to check out CUDA and RTX performance in the 3D rendering and simulation software. The RTX 4070 Ti Suprim X outperformed the Asus TUF in the CUDA test but came in below it in the RTX test. Both cards were close together way out in front of the RTX 3090 Ti and even farther behind the RTX 4080.

We have 1657 guests and no members online