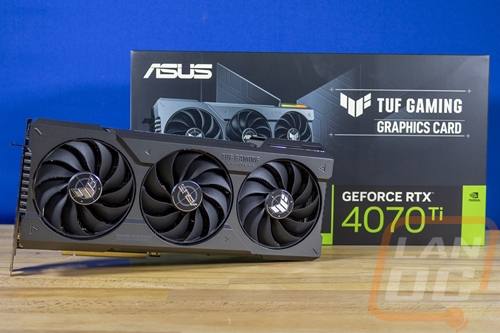 With our testing out of the way, the RTX 4070 Ti and the Asus TUF Gaming RTX 4070 Ti that I tested both are an interesting addition to the Nvidia product stack. The 4070 Ti as a whole trades blows with last generations flagship, the RTX 3090 Ti, and especially at 1080p and 1440p it often outperforms the 3090 Ti. This fills in the gap below the RTX 4080 which AMD took advantage of with their new 7900 XT but the RTX 4070 Ti doesn’t keep up with the 7900 XT so there is still some room there. Where with the RTX 4080 and RTX 4090 Nvidia was focused on 4K performance, with the RTX 4070 Ti they finally turned their focus to 1440p and they cement that with the card's lower memory bus which at 192-bit is lower than even last generations 3070 Ti had. This didn’t affect performance at 1080p and 1440p but you can see in our testing where the 3090 Ti does much better at 4K whereas the 4070 Ti runs with it otherwise. That said 4K performance wasn’t bad, it just wasn’t as dominant as the 4070 Ti is at 1080p and 1440p. The RTX 4070 Ti has full support for DLSS 3 and interestingly enough that is enough to get high refresh frame rates at 4K or to see performance improvements in CPU-limited games like Microsoft Flight Sim.

As for the Asus TUF Gaming RTX 4070 Ti OC that I tested. As the name suggests this was an overclocked card so we don’t know where the stock clocked performance will be but the overclocked Asus TUF card did well in our testing. It ran quiet and the RTX 4070 Ti as a whole was surprisingly power efficient, topping our charts in performance per watt when running 3DMark Time Spy Extreme. The TUF card does use the new 12VHPWR connection which I don’t mind, but I do wish some of these cards would angle the connection as we saw with some 3000 series cards including the Founders Edition cards which took the strain off the connection. The TUF card isn’t the largest 4070 Ti out there, in fact, it was a lot closer to standard sizes when it came to height and length but at 64mm thick it is just a hair past a 3-slot card which is surprisingly thick. I like how clean the styling is on the card and Asus hide a few cool easter eggs in the design as well but as far as RGB lighting goes I wouldn’t have minded the design having the lighting spread out a little more across the card and not just having it all in the one corner and mostly just backlit branding.

As far as pricing goes, the RTX 4070 Ti has an MSRP of $799 which is $100 less than when the original 4080 12GB was announced, and the Asus TUF Gaming RTX 4070 Ti OC that I tested today has an MSRP of $849.99, $50 more than the base 4070 Ti price. Your opinion on this pricing is going to depend a lot on what you are comparing it to. This is a big jump from the $599 that the last generation RTX 3070 Ti launched at but for comparison, it isn’t as bad when we compare it to the $1999 MSPR that the RTX 3090 Ti launched at which the 4070 Ti runs with. More importantly, compared to AMD's RX 7900 XT which recently launched at $899 Nvidia did at least beat that price which is important given the 7900 XT outperformed it in traditional raster performance. The 4070 Ti does have the edge when it comes to ray tracing and DLSS of course. Overall I would say that none of the current generation cards are a value, this could be attributed to higher costs for TSMC manufacturing, higher costs for materials, the rising cost of living as a whole, or Nvidia looking for a bigger slice of the pie. But I can at least say that as of right now, while not the best value the 4070 Ti pricing is in line with the competition and it does get you a lot of performance. With this being the most efficient Ada card yet as far as power to performance I’m excited to see what comes next as we start to get into the mid-range of the product stack. 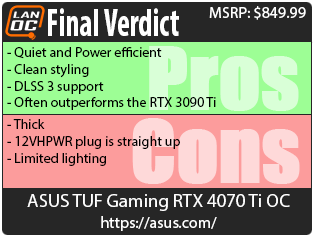 You might call him obsessed or just a hardcore geek. Wes's obsession with gaming hardware and gadgets isn't anything new, he could be found taking things apart even as a child. When not poking around in PC's he can be found playing League of Legends, Awesomenauts, or Civilization 5 or watching a wide variety of TV shows and Movies. A car guy at heart, the same things that draw him into tweaking cars apply when building good looking fast computers. If you are interested in writing for Wes here at LanOC you can reach out to him directly using our contact form.
Discuss this article
Log in to comment
Posts in discussion: ASUS TUF Gaming RTX 4070 Ti OC

We have 1861 guests and no members online