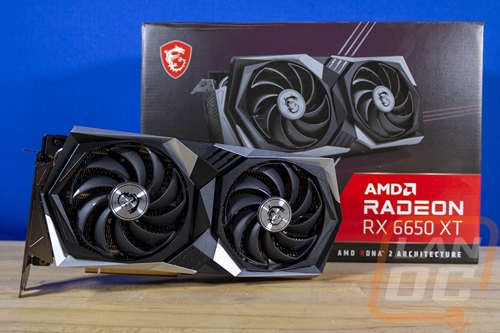 While AMD's new refresh isn’t any new silicon, the bump in clock speeds especially with our overclocked MSI RX 6650 XT Gaming X was enough to show a big performance improvement when compared to the original RX 6600 XT that we took a look at. That difference was especially noticeable in our game benchmarks where the 6600 XT and the RTX 3060 used to trade blows the 6650 XT is out ahead consistently. This translates to 1080p performance that should handle anything you throw at it and even at 1440p, the 6650 XT didn’t do too bad as long as you are a little careful with settings on the most demanding games. The performance improvement didn’t make much of a difference when we got into the compute tests.

For the last few years, GPU pricing has been just all over the place with relatively exciting MSRPs combined with out of this world pricing in the real world. That pricing has started to come down and with the 6650 XT launch, AMD is suggesting that the cards will start at $399. The MSI RX 6650 XT Gaming X on the other hand is listed at the launch today at $449.99 so you are paying a little bit of a premium for the small overclock and the cooling performance. But at least we are back to real-world pricing. For comparison, the RTX 3060’s are starting at $429.99 on Newegg right now, and given what we have seen for performance this makes the RX 6650 XT a solid deal. AMD has also announced their “Raise the Game” bundle which should add a free game into the mix as well. 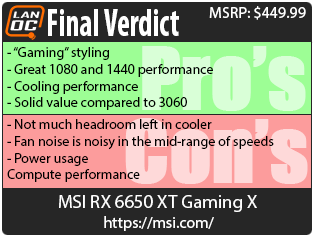 You might call him obsessed or just a hardcore geek. Wes's obsession with gaming hardware and gadgets isn't anything new, he could be found taking things apart even as a child. When not poking around in PC's he can be found playing League of Legends, Awesomenauts, or Civilization 5 or watching a wide variety of TV shows and Movies. A car guy at heart, the same things that draw him into tweaking cars apply when building good looking fast computers. If you are interested in writing for Wes here at LanOC you can reach out to him directly using our contact form.
Discuss this article
Log in to comment
Posts in discussion: MSI RX 6650 XT Gaming X