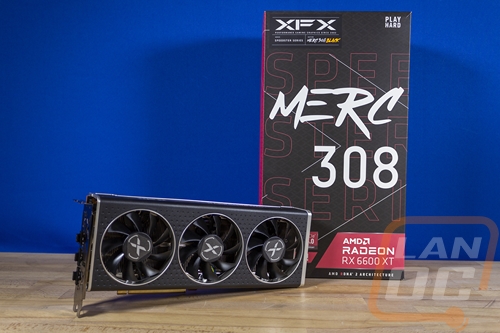 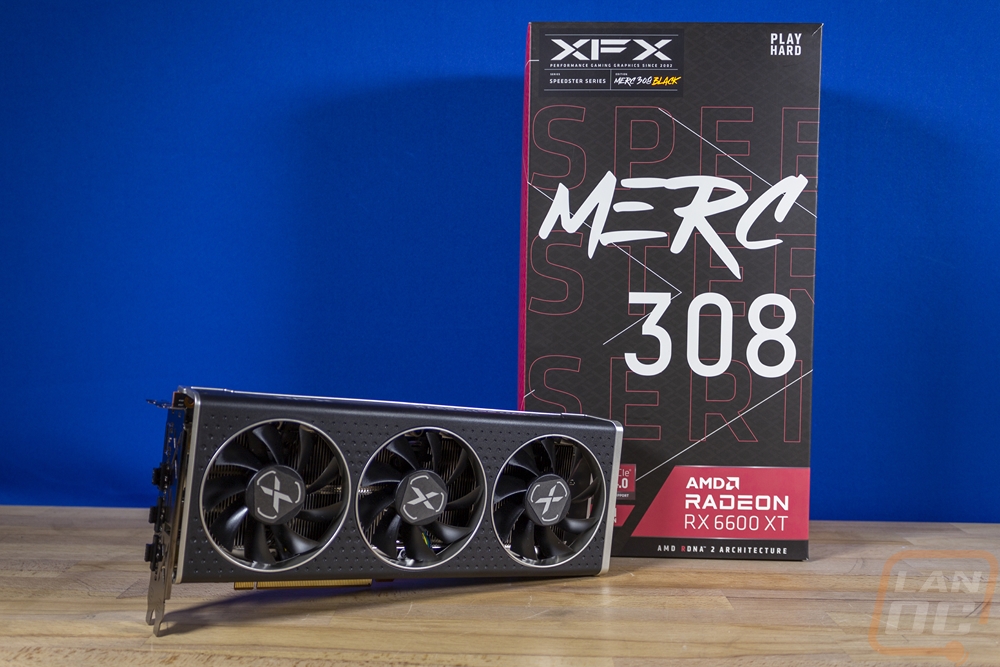 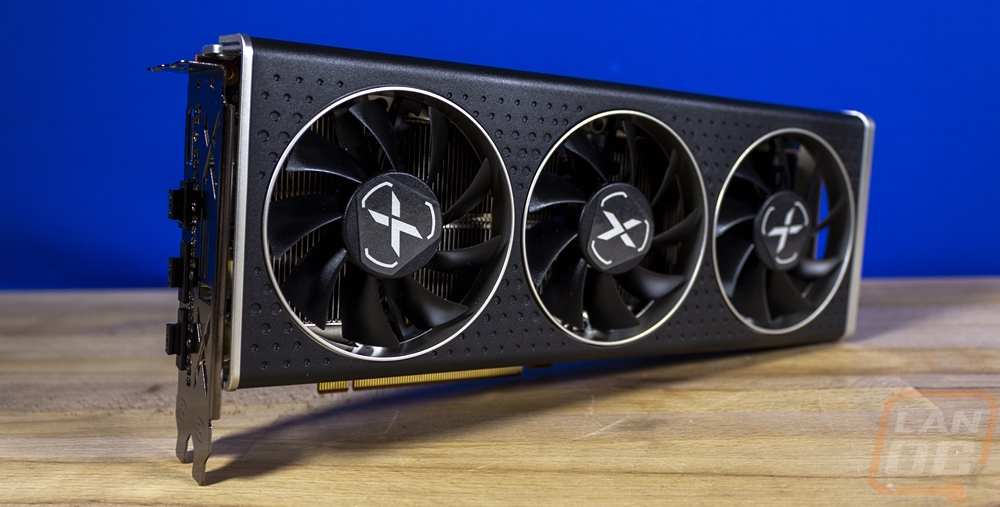 So the biggest and most obvious difference between this card and the previous cards we have had in the office from XFX is the overall size. The XFX MERC 308 RX 6600 XT Black is 10.79 inches long or 274mm, 4.49 inches tall or 114mm tall, and 1.97 inches thick or 50mm thick. For reference here are the sizes of this and the 6700 XT and 6800 XT MERC models. You can see both the 6700 XT and 6800 XT were much larger, in fact, the XFX MERC 308 RX 6600 XT Black is back down to a normal-sized card, which is rare these days. That includes the thickness where it is almost a normal 2 slot card though it is still a little past a 2 slot making it officially a 2.5 slot and it hardly sticks up past the top of the PCI bracket. 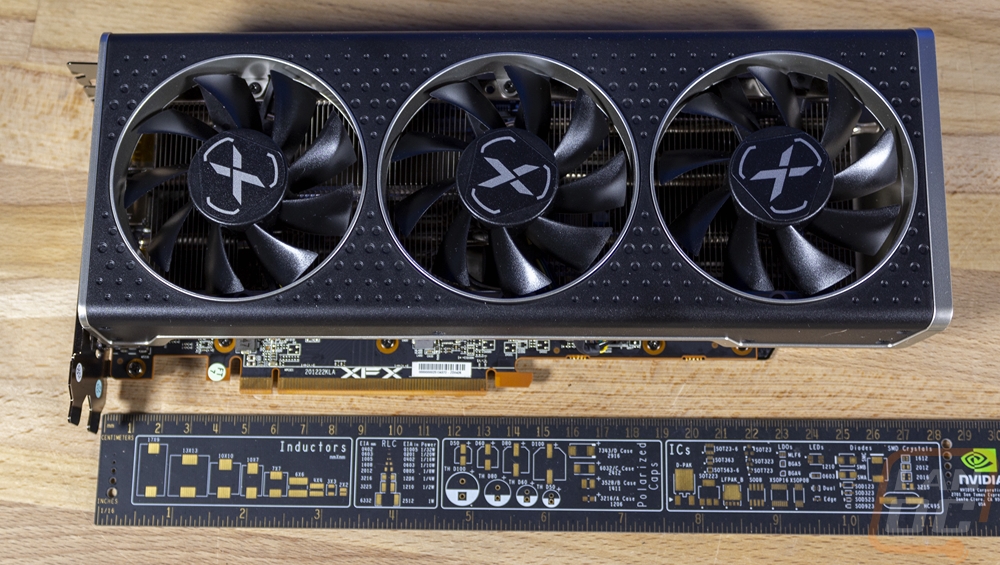 So some of you might have noticed that the 6700 XT and 6800 XT were both MERC 319’s but this is a 308. That is because with the smaller card size this doesn’t have the same fan layout as the previous two which had two 100mm fans and one smaller fan. The XFX MERC 308 RX 6600 XT Black has three 80 mm fans of equal size. They all still have the same triangle-shaped sticker on the fan center section with the new XFX X. They have 9 blades and a traditional axial blowing design that blows down into the aluminum finned heatsink below the fans. The heatsink has a horizontal fin layout which means air blows up and down except for on the end fan which goes past the end of the PCB and can blow through. 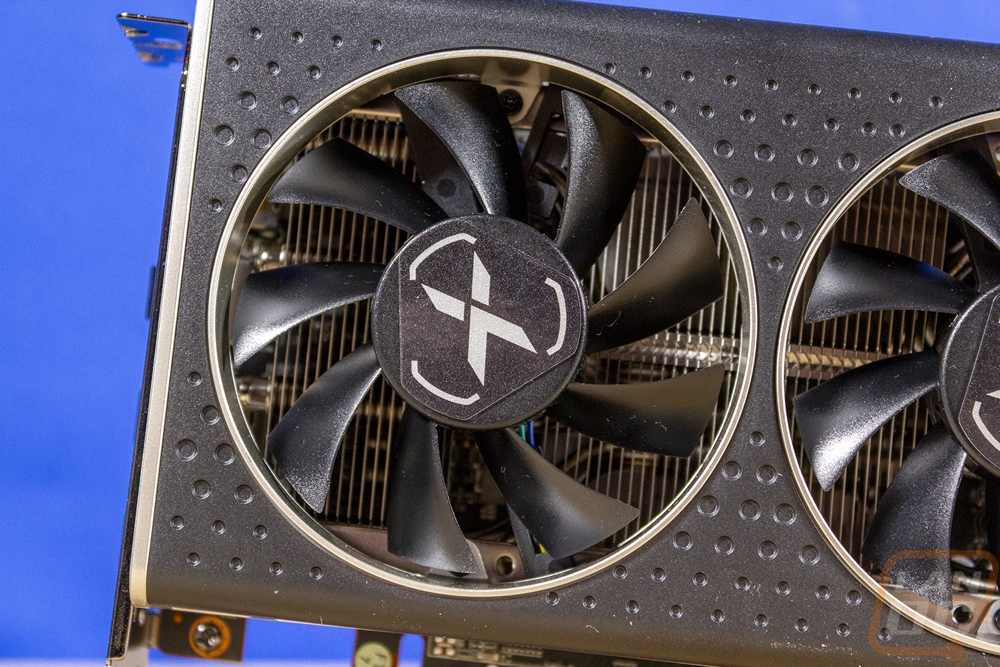 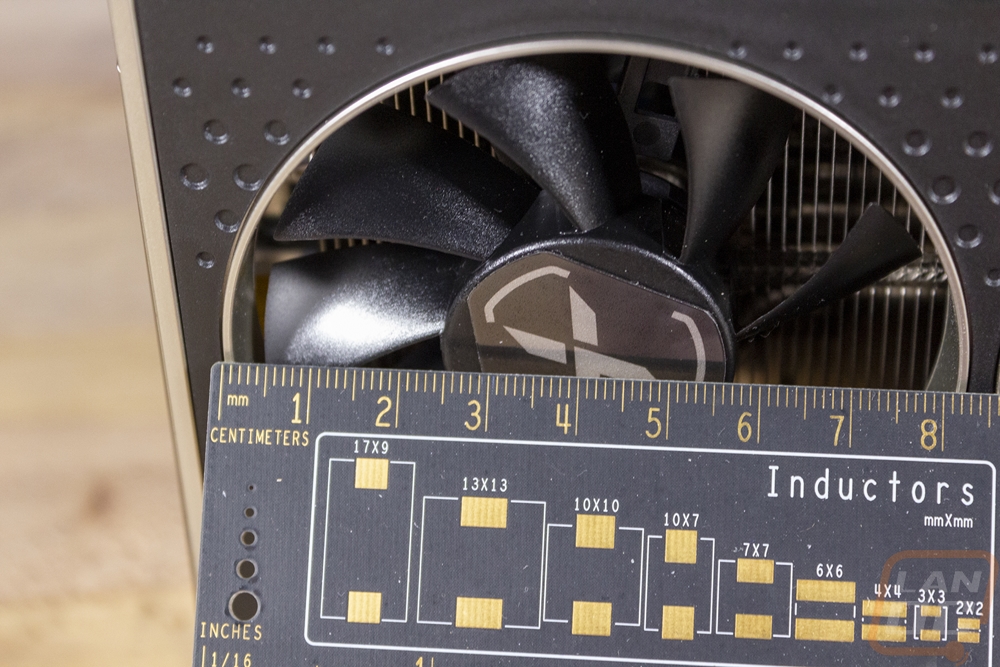 The top of the card is the biggest area where we see the XFX MERC 308 RX 6600 XT Black set itself apart from the QICK model. In addition to the silver trim and stylized fan shroud, up on top XFX has included some backlit branding on the most visible edge of the card. Normally I would hate on having backlit branding, but they also did exactly what I love. The top of this card actually tells you the model name and even THAT is backlit with LED lighting as well. So the Radeon RX 6600 XT logo is lit up in which and red for the RX section as well as the XFX logo. 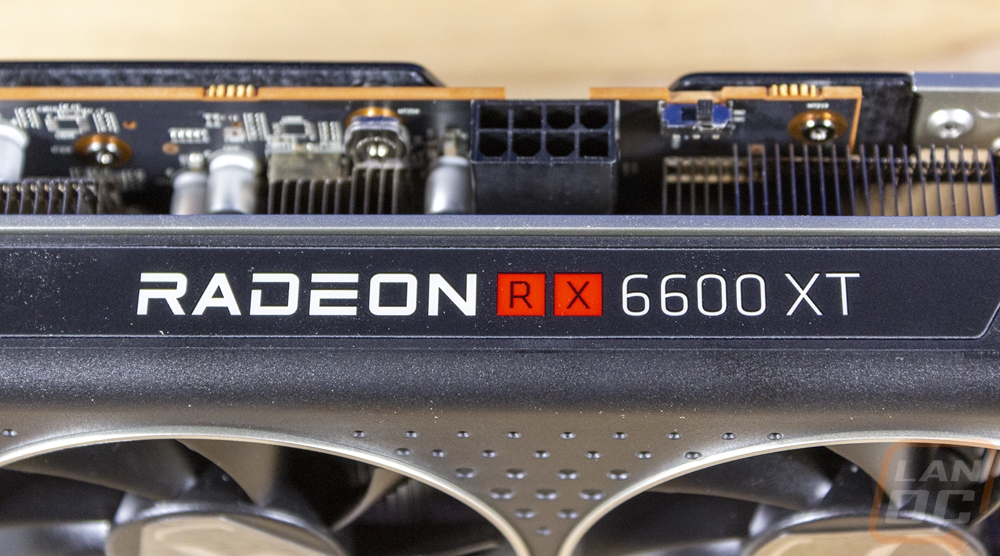 The top edge of the card also has two more important things to keep in mind. It has the power connection which like what AMD listed for their “reference” design it uses a single 8-pin power connection. Then beside that XFX has also slipped in a BIOS switch. For the launch cards, they only have one mode included so we aren’t able to compare the differences. But I would expect XFX to have a second mode which they have done in the past that has the same clock speeds but a different fan profile and potentially a different power profile. 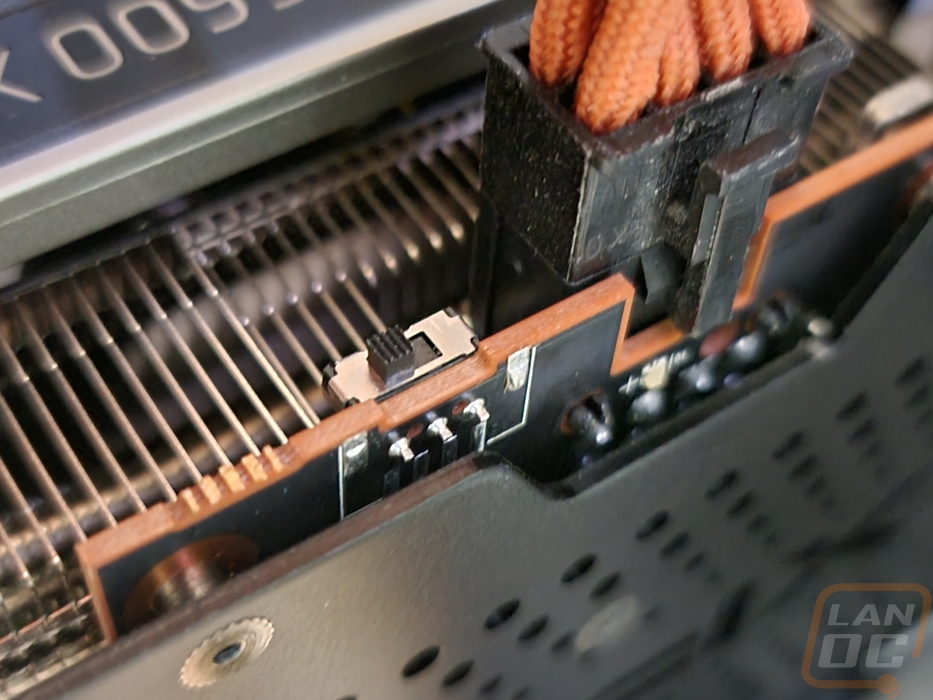 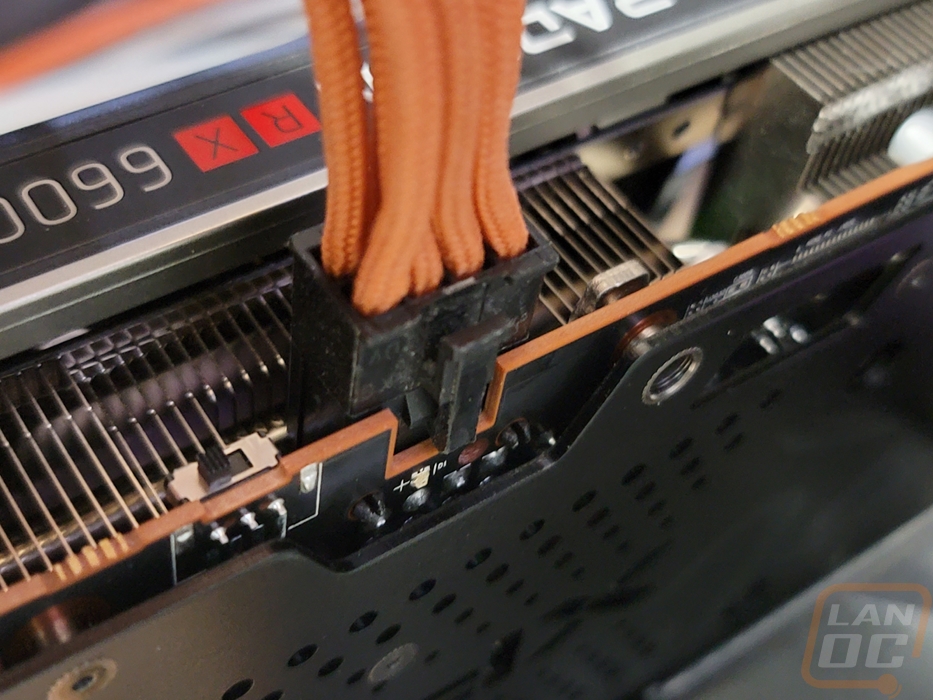 Looking around at the top, bottom, and end edges of the XFX MERC 308 RX 6600 XT Black confirms a lot of what we saw even just looking through the fans. That includes the horizontal heatsink layout which means the air will be blowing out the top and bottom of the card. We can also see that the heatsink is formed well around components on the PCB and utilizes the space well. The heatsink has a nickel-plated copper GPU and memory cold plate which is where the four 6mm heatpipes all join together. They then run out both directions to pull the heat out away from the hottest area and up closer to the fans. XFX is also has a full digital PWM with a 6+2 phase design.

The back of the XFX MERC 308 RX 6600 XT Black has a thick aluminum backplate, not a thin sheet metal or even plastic backplate like a lot of cards have been going to. The backplate has a black finish and if you look closely you can see the MERC branding on it in a different but still black finish. The backplate has the XFX logo cut out of it as well holes from the center to the back of the card where it also has a large hole for the blow-through design.

The PCI bracket hasn’t changed at all. It has the XFX logo cut out in it like XFX has been doing for a long time now along with a few other smaller holes. It isn’t a big part of the cooling though with most air going to the top and bottom of the card, not the ends. Then they have the standard display connection layout which is three DisplayPorts and one HDMI. The finish is a tinted metal and I might sound like a broken record, but I still think a nice black finish would look more premium and better match the card overall with its black and silver theme.

Before getting into testing I did have to check out the lighting. Like I said before, the XFX logo as well as the Radeon  RX 6600 XT branding is all backlit. It isn’t RGB, just simple white backlighting that light up the white and red in the logo. I don’t really dig backlit branding overall for the reason you can even see on our test bench where the motherboard, video card, memory, and even AIO all have to have their logos shown off and it starts to look like times square. But the exception to that is when we can actually see the model like on the XFX MERC 308 RX 6600 XT Black. 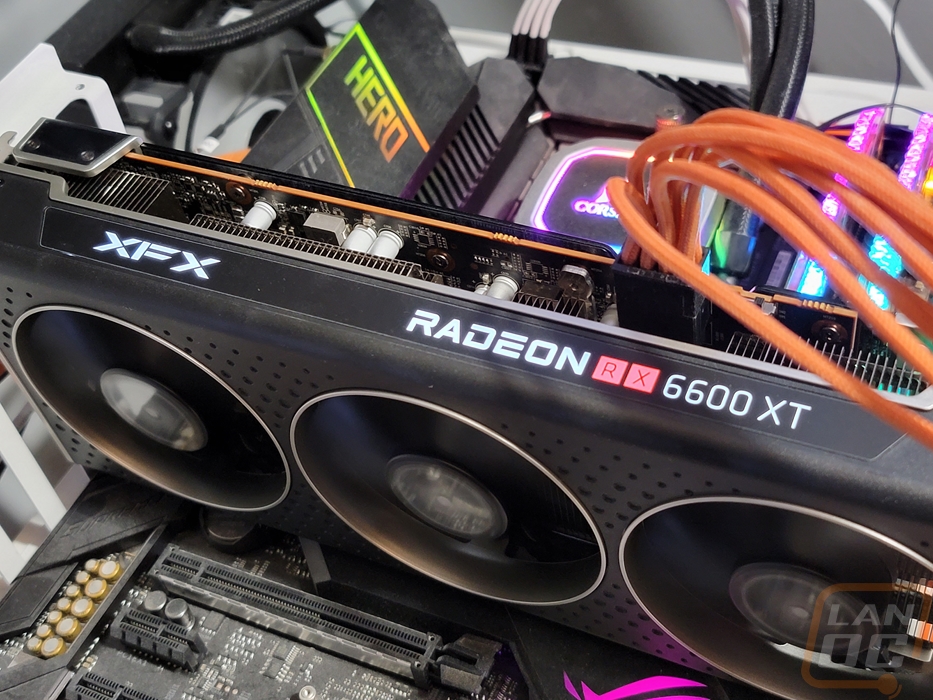 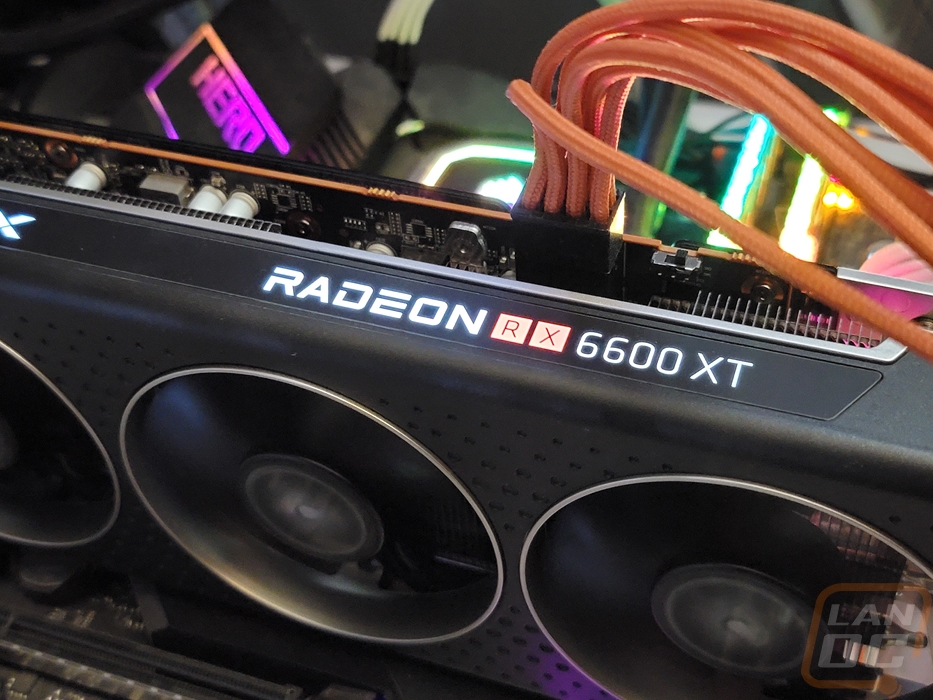 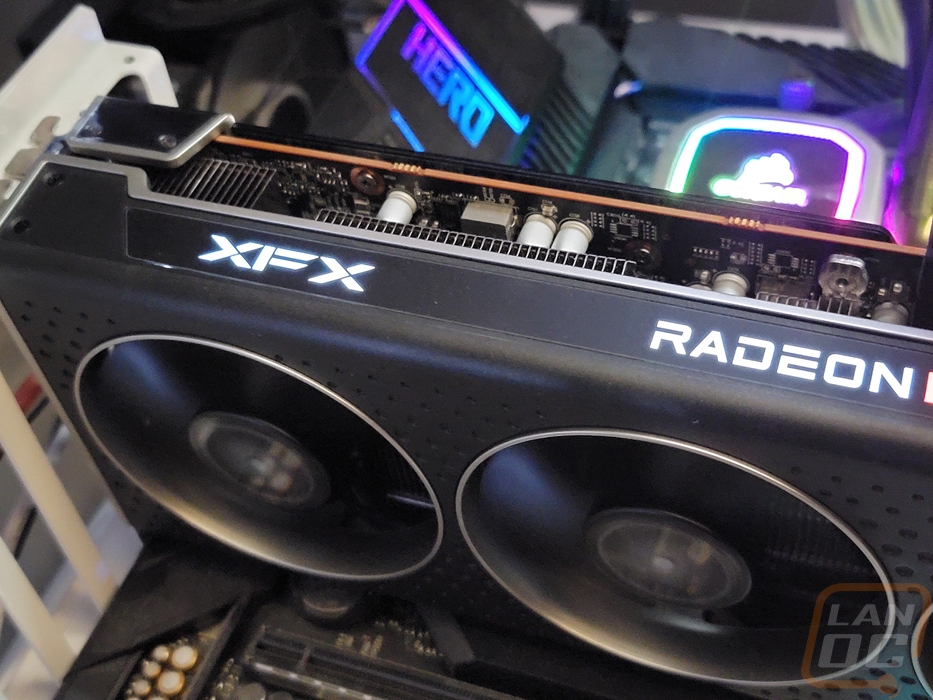