When it comes to the styling and overall build quality of the Founders Edition cards, Nvidia goes completely overboard and I love it. Each of them when you pick them up is heavy due to the all-metal construction where aftermarket cards often use plastic for thin fan shrouds and sometimes even backplates Nvidia doesn’t do that. With the 3000 series of cards they evolved their card design once again where they used to do blower designs, then went to a dual-fan design with the 2000 series. Well, the 3000 series cards has a new exterior heatsink design that no other card is using. For the 3080 and 3090 cards, the front of the card is split up with an X shape but for this card and the original RTX 3070, it has an S shape to the metal fan shroud that goes around the outside edge and bottom of the card. This silver has great contrast against the black exposed heatsink. This is also a huge change from the original RTX 3070 Founders Edition which had both fans on the front, that design did have the S shape but this seems to combine the S shroud design with the dual-sided fans of the 3080 and higher. 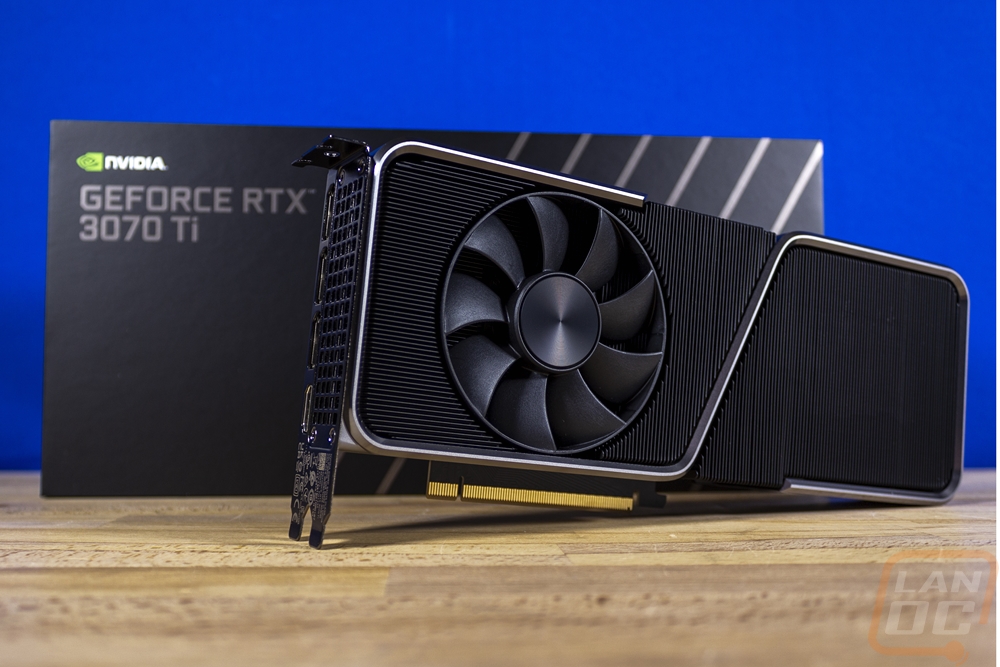 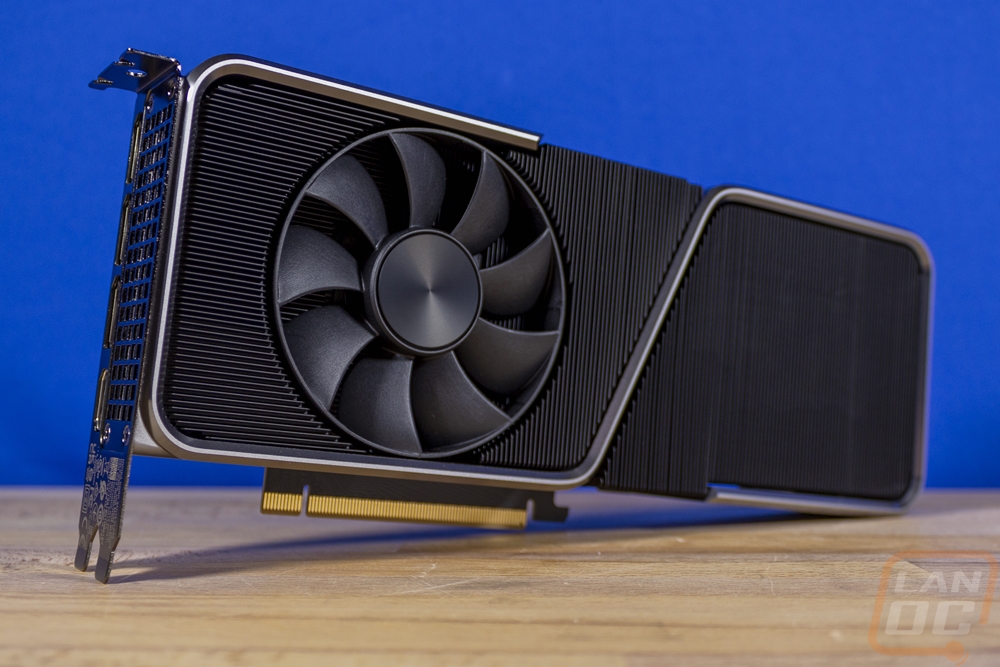 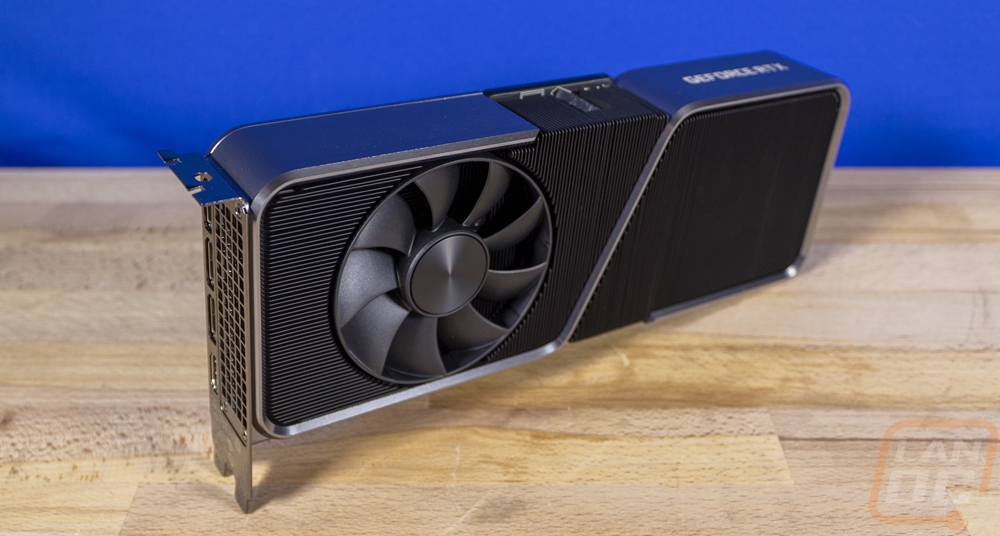 The side of the RTX 3070 Ti Founders Edition also lets us know that this is a completely new design as well. The original 3070 was 240mm long where this card is 270mm long. It isn’t the full length of the RTX 3080 and RTX 3080 Ti but it is close. The card is just under 40mm thick which means it is a standard 2 slot card which other than other Founders Edition cards is becoming rarer and rarer. Then for height, it sits at just 5mm up over the top of the PCI bracket which is also standard height, which is another area a lot of cards have been going crazy with. 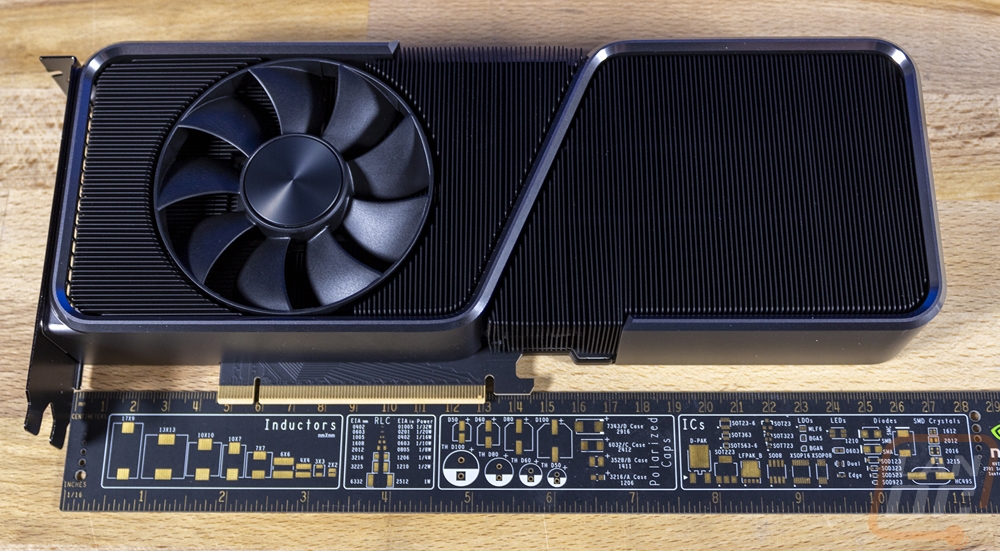 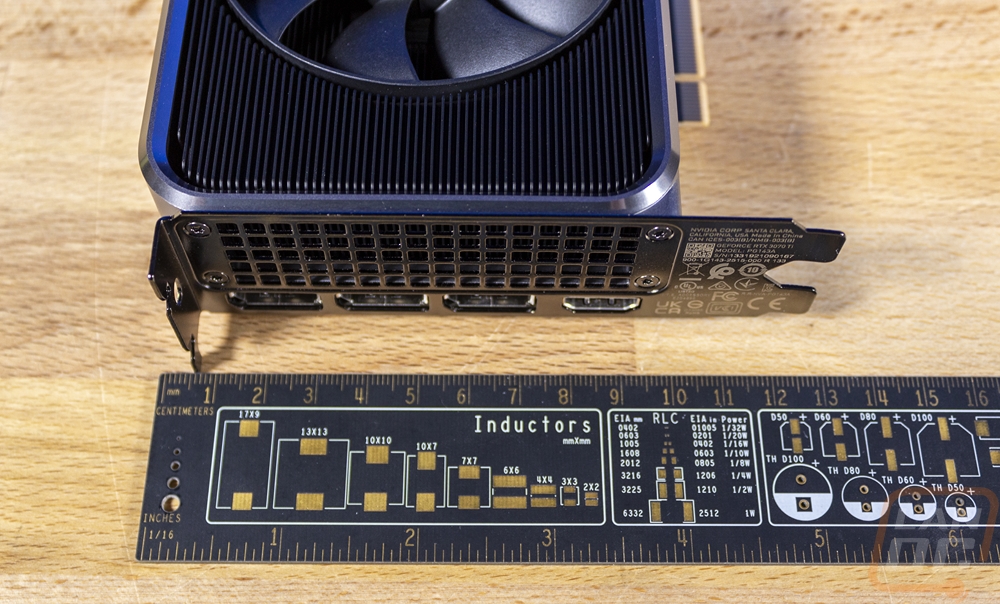 A direct side view of the RTX 3070 Ti Founders Edition gives us a better idea of how the exposed heatsink is moving air around. So on the left half of the S shape, the front of the card has an 85mm axial fan. The fan has 9 blades with a solid ring on the outside to give the blades more strength. This blows down into the heatsink. To the left of the fan, all of the heatsink fins are oriented to the side to direct the air that goes that direction to go out the back PCI bracket. Then to the right, they are all aimed up to focus this air up and out of the top of the card in the opening where the S-shaped shroud isn’t over it. On the right side, all of the airflow comes from the back of the card which I will touch on here in a second. 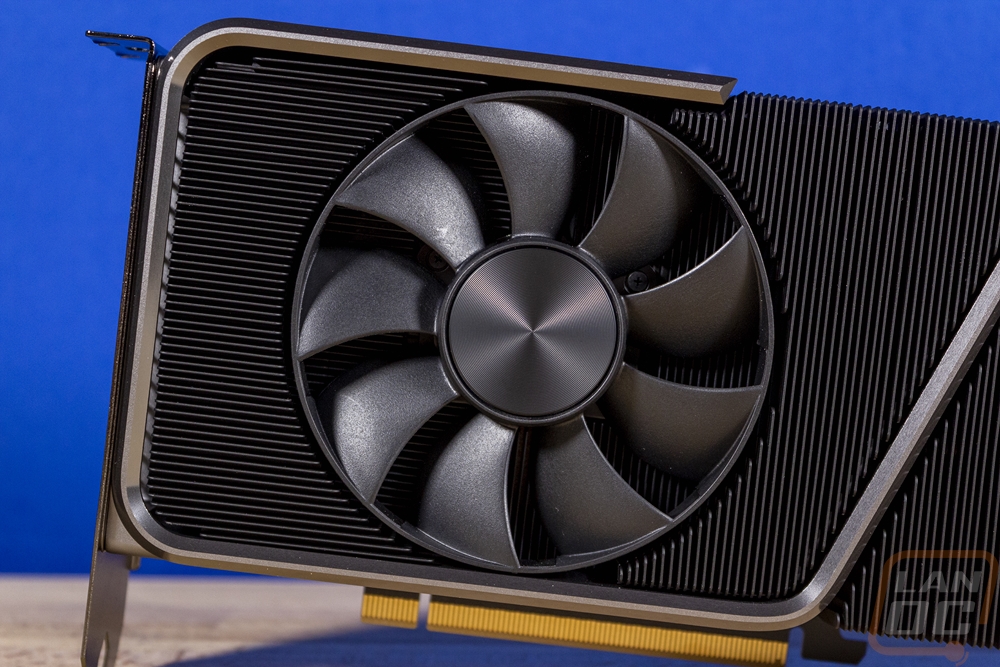 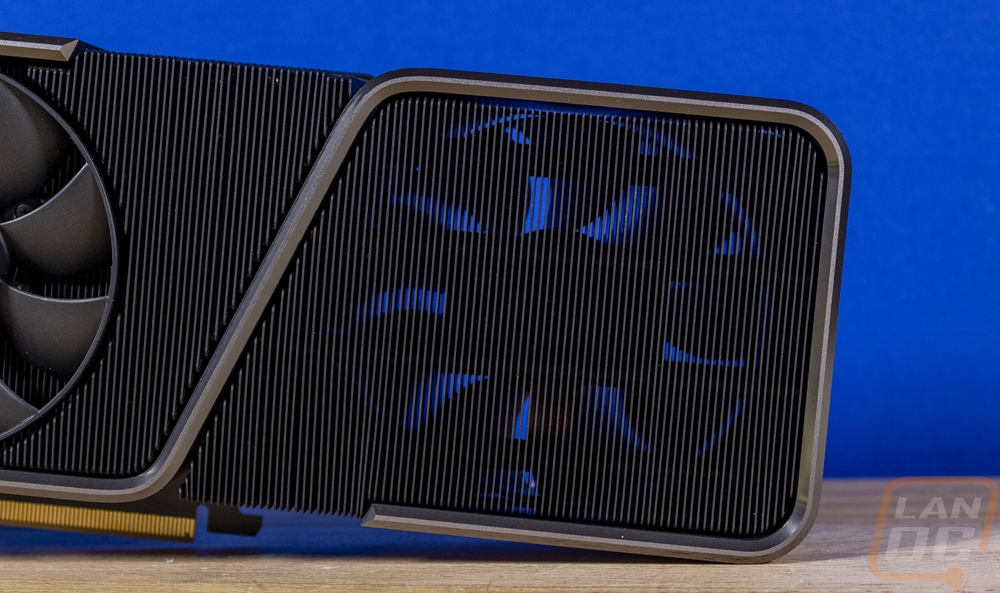 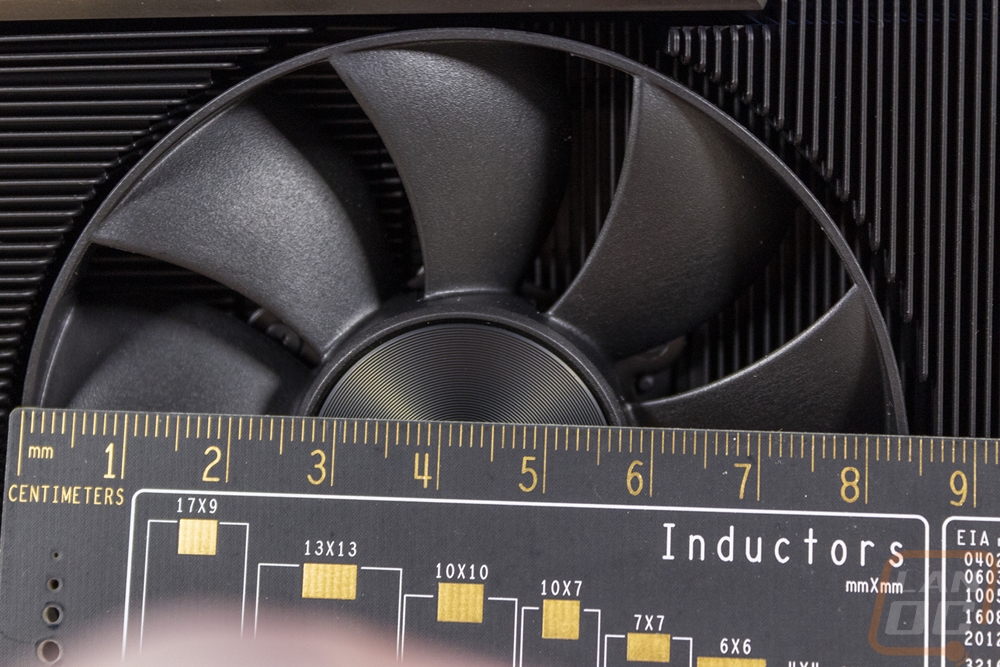 The backside of the RTX 3070 Ti Founders Edition has the same S shape as the front, but this side doesn’t have any exposed heatsink. This is still the backplate, even though there is a fan. The backplate has a black finish to match the heatsinks on the front and they have the model name etched in the middle and oriented so that it will be readable when installed in your case. The fan on the left has the same 85mm width as the front fan. It also has the same 9 blades, metal center ring, and outer ring. But this is a different fan. The front fan blows air down, but the blades here are designed to pull air through the heatsink and blow out of the back. This means in a normal case orientation it will blow this air up which is good. This pull-through design is how the entire half of the heatsink gets its airflow. It's also important to know that this back design is drastically different than what the RTX 3070 Founders Edition had. This is more like the RTX 3080, only without the X shape. The original 3070 didn’t have a fan on the back and had a full black back with just the heatsink passthrough area. 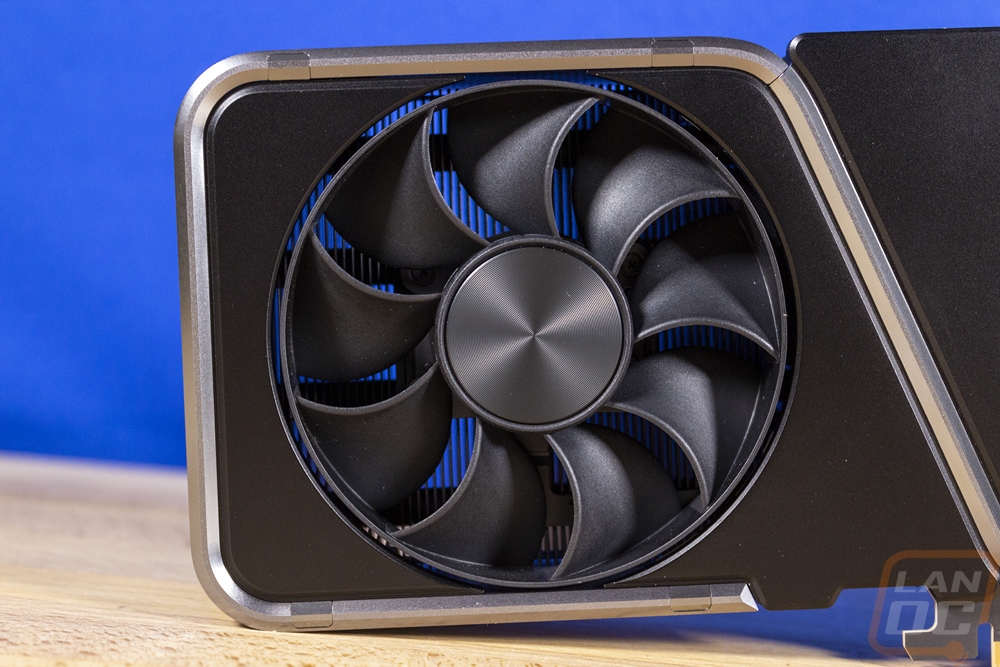 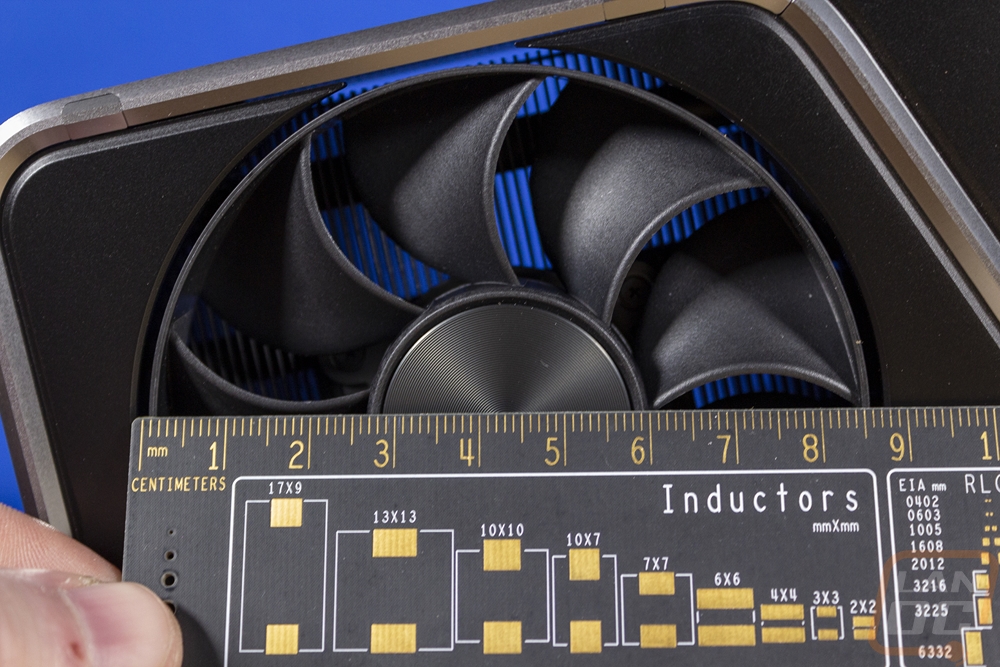 The top edge of the RTX 3070 Ti Founders Edition is mostly covered in the metal S-shaped shroud but in the center, you do have the heatsinks that push air up out of the card. This gives a small glimpse of the black PCB here and is also where Nvidia has the power plug. This is because this is the end of the PCB to allow for the blow-through heatsink design. For power, the RTX 3070 Ti Founders Edition has one 12-pin plug which is angled to the end of the card slightly. This is Nvidia’s new power connection and the card does come with a 12-pin to dual 8-pin adapter which you can see in the packaging section. The top of the card also has the normal RTX GeForce branding on it but unlike the RTX 3080, it isn’t backlit here and there isn’t any lighting on the fan side as well. 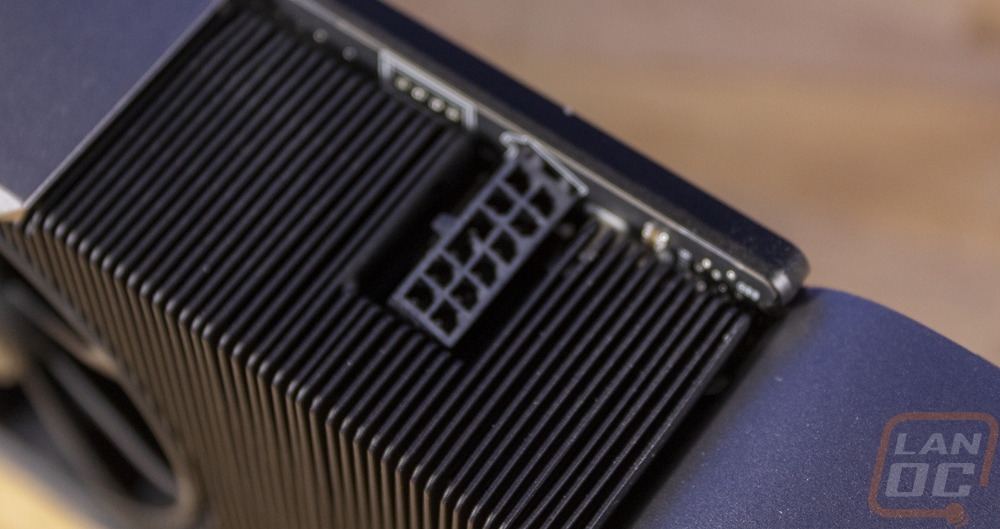 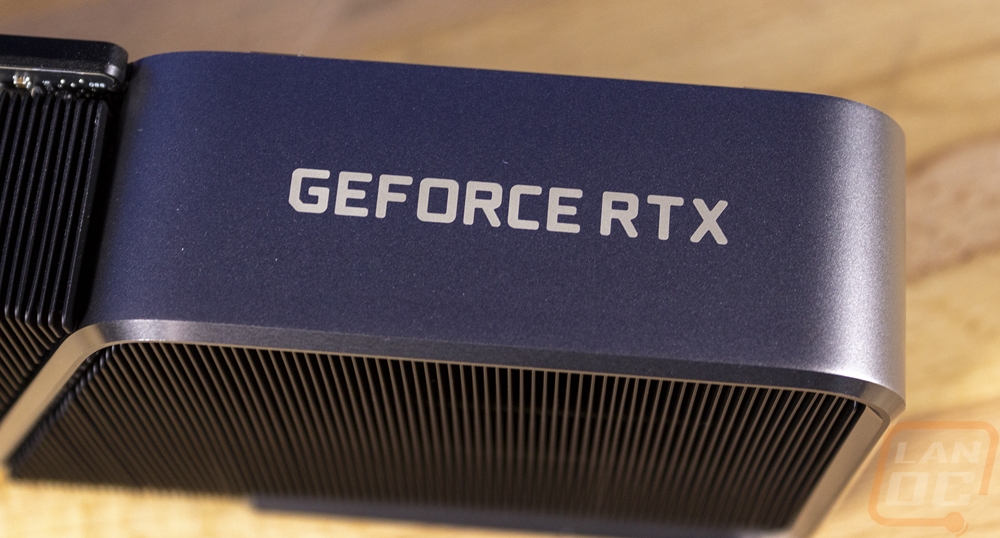 Looking around the top, end, and bottom of the RTX 3070 Ti Founders Edition mostly just gives us another look at the S-shaped metal shroud. We can see the openings for airflow at the center on the top and bottom. The end of the card also has two removable screws for server and some OEM mounting to stabilize the card. The all-metal design overall doesn’t have to worry at all about sagging, however.

At the end on the PCI mounting bracket, Nvidia has etched the serial number and model information here along with all of the required certification logos. This keeps the rest of the card clean which is nice. The bracket has a tinted finish but isn’t full black which I think would match the card better and look better in most cases. While not a blower card, the RTX 3070 Ti Founders Edition does still push air out the end of the card and they do have ventilation in the bracket. Surprisingly this card doesn’t have the same extremely opened-up design that the RTX 3080 cards have, these smaller vent holes will allow air but block a lot compared to the giant holes in those cards. Then for display connections, it has the standard three DisplayPort and one HDMI.

So here is a look at the included power adapter coming out of the top. I know the PCB has to end in the middle of the card and there isn’t a better option. But I don’t think I will ever be a fan of center-mounted power plugs. Once we start seeing 12-pin cables directly from the PSU it will help a lot though to clean this up. 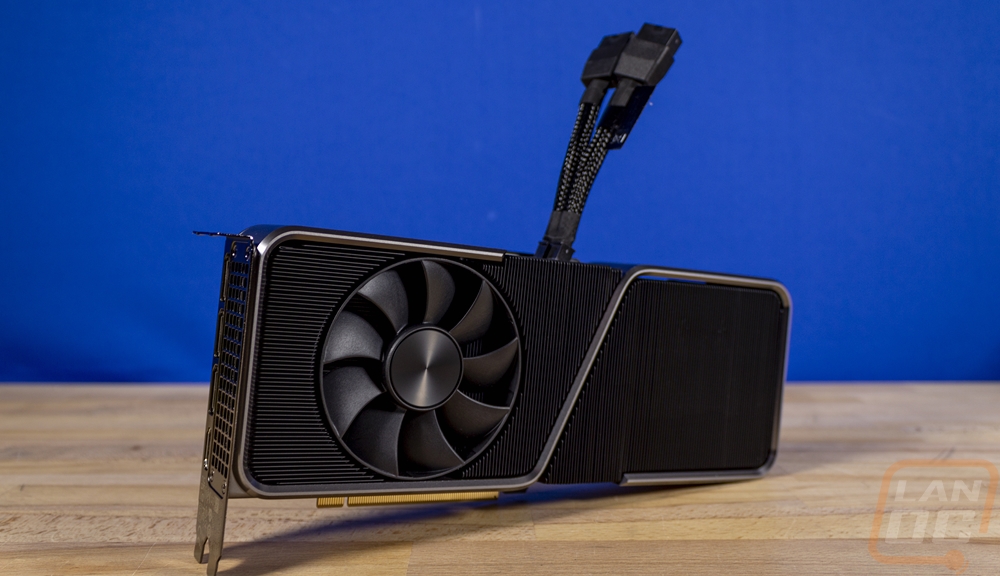