For my last few tests, rather than focusing on in game performance, I like to check out other aspects of performance. These are also the most important ways to differentiate the performance between cards that have the same GPU. To start things off I took a look at power usage. For this, I use our Kill-A-Watt hooked up to the test bench to record the total wattage of the system. I ran two tests with the first using 3DMark Fire Strike to put the system under a load similar to normal in game performance. Here the MSI RTX 3080 SUPRIM X is up right at the top in the AIDA64 test and below only the old Vega 64 LC in the 3DMark tests. This isn’t a huge surprise given that MSI even has this listed with a power usage of 370 watts where the Founders Edition has the TGP (total graphics power) at 320 watts. The gap between the two in actual testing however isn’t at that 50-watt difference. But it was 12 watts higher in 3DMark and 12 again in AIDA64. 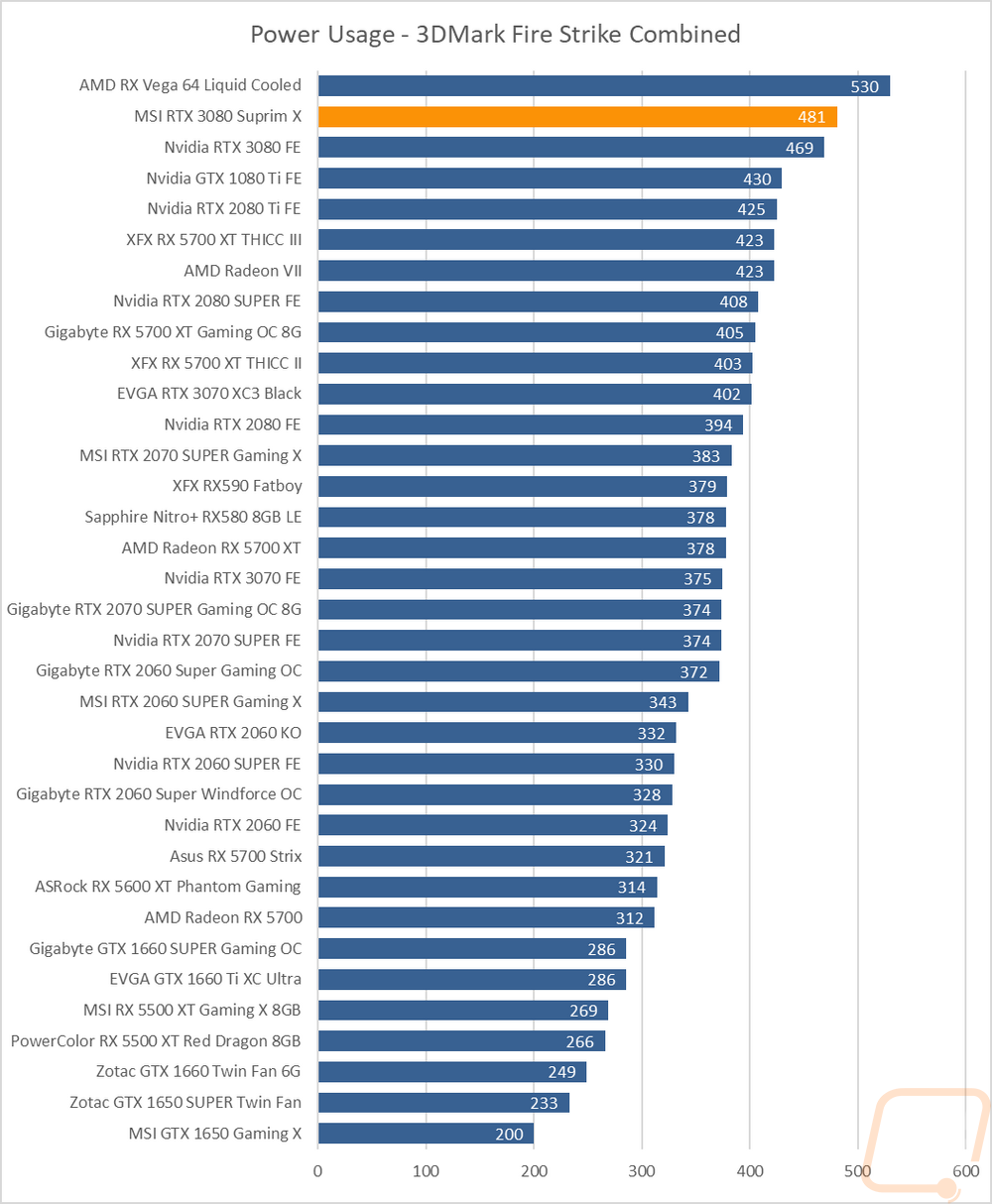 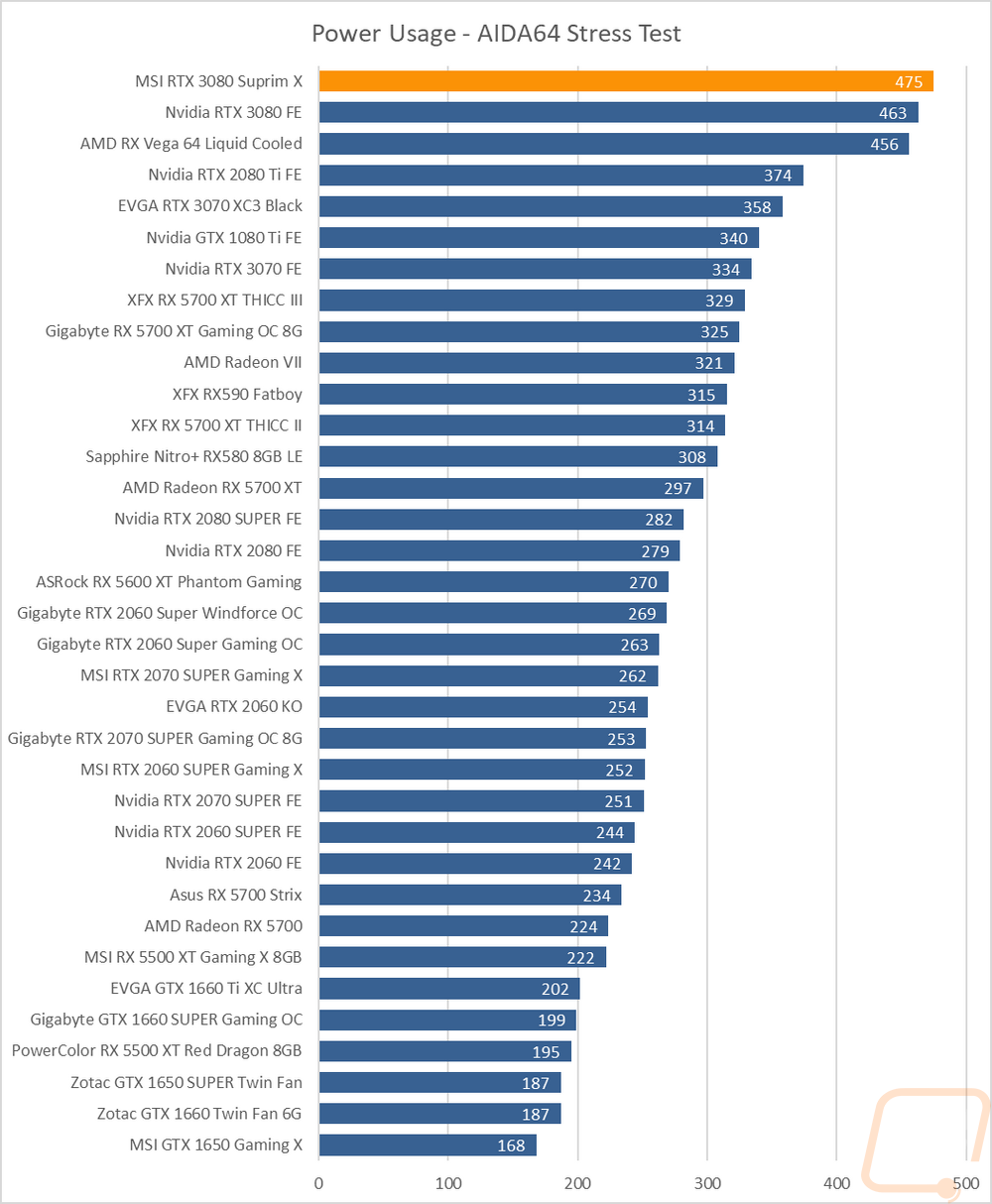 My next round of tests were looking at noise levels. These are especially important to me because I can’t stand to listen to my PC whirling. Especially when I’m not in game and other applications are using the GPU. MSI does turn the fans off on low power usage, which helps keep things quiet when you aren’t gaming. In my testing it seemed like there was either a delay or MSI has the fans not to come on until things reach around 61c but they stay on until things cool down to 43c. For my testing, though I first tested with the fan cranked up to 100% to get an idea of how loud it can get, then again at 50% to get an idea of its range. Which at 100% fan speed the MSI RTX 3080 SUPRIM X, with its three fans did shockingly well at 56.3 decibels and 37.9 with the fans turning at half speed. The main result I was worried about though was how noisy things were when under load for an extended amount of time and the SUPRIM X came in right in the middle of the pack here at 37.5. The impressive part though is this was done on the “gaming” BIOS setting that I did all of our testing on. MSI does have the quiet mode which should quiet things down even more, but in my initial testing on our under load test came in a little louder at 40dB. In fact, the power draw was the same as well as were the temperatures so I’m not sure what all that BIOS has set differently. (I suspect that this is a bug however, checking with MSI to confirm) 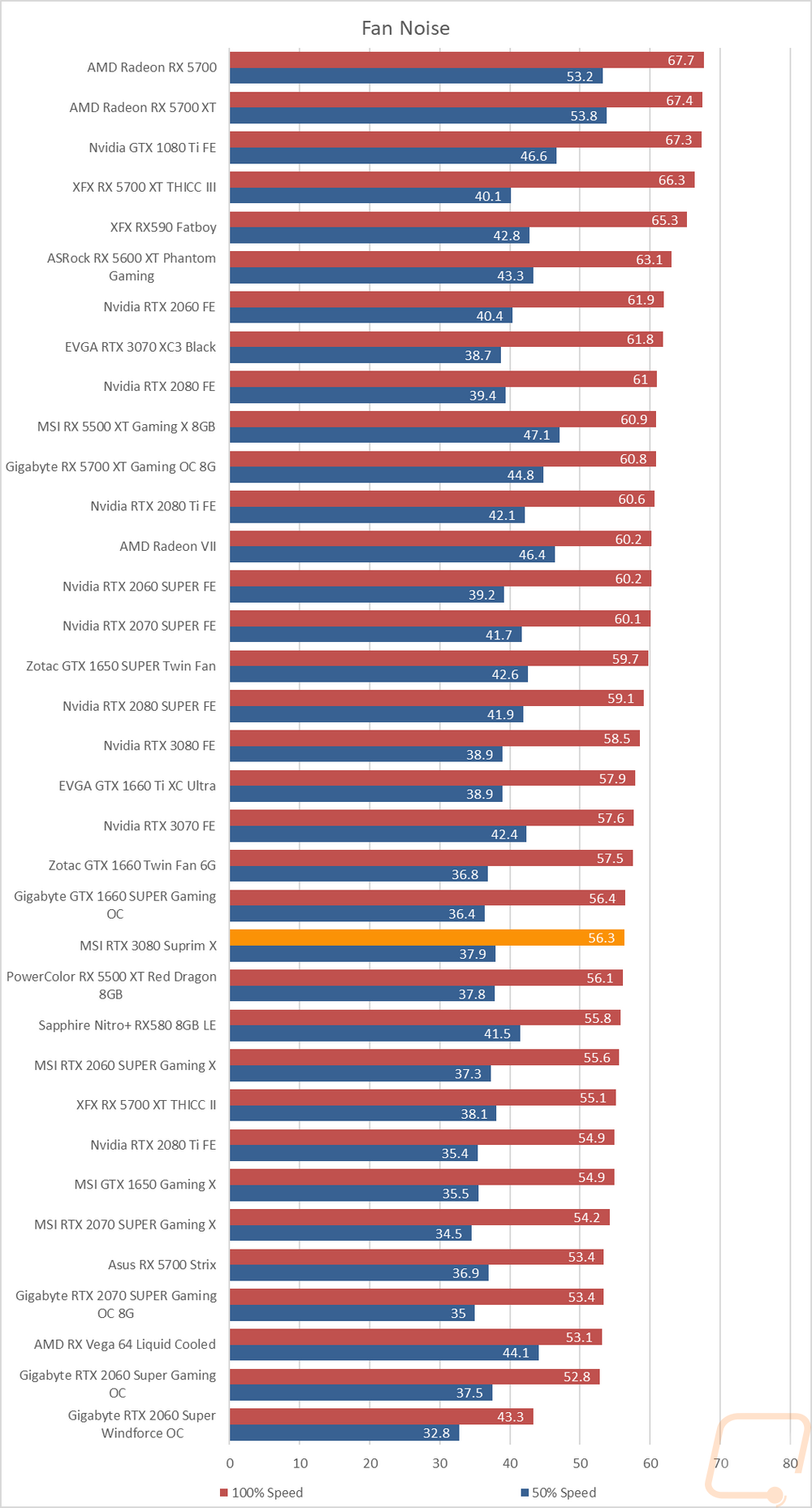 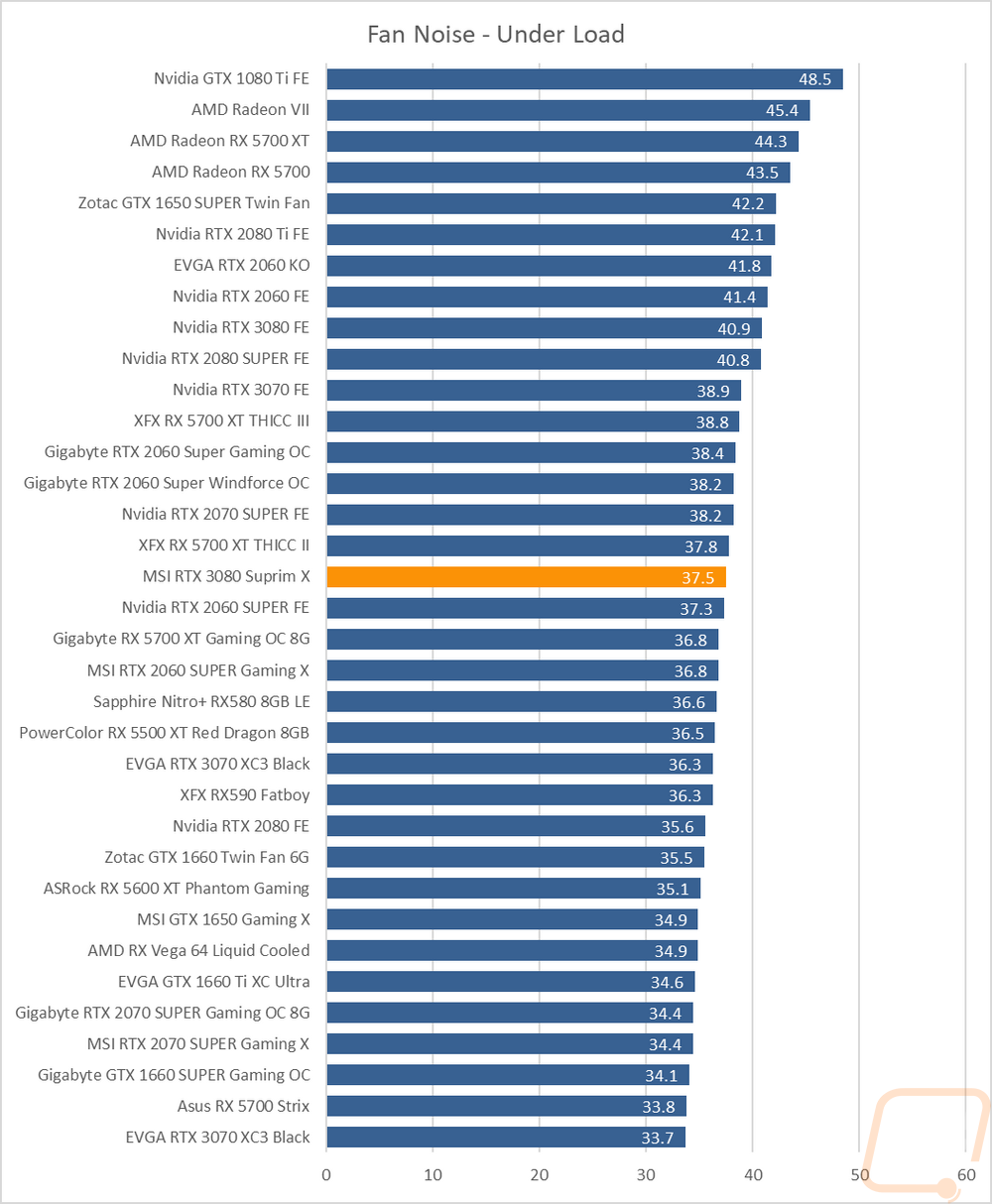 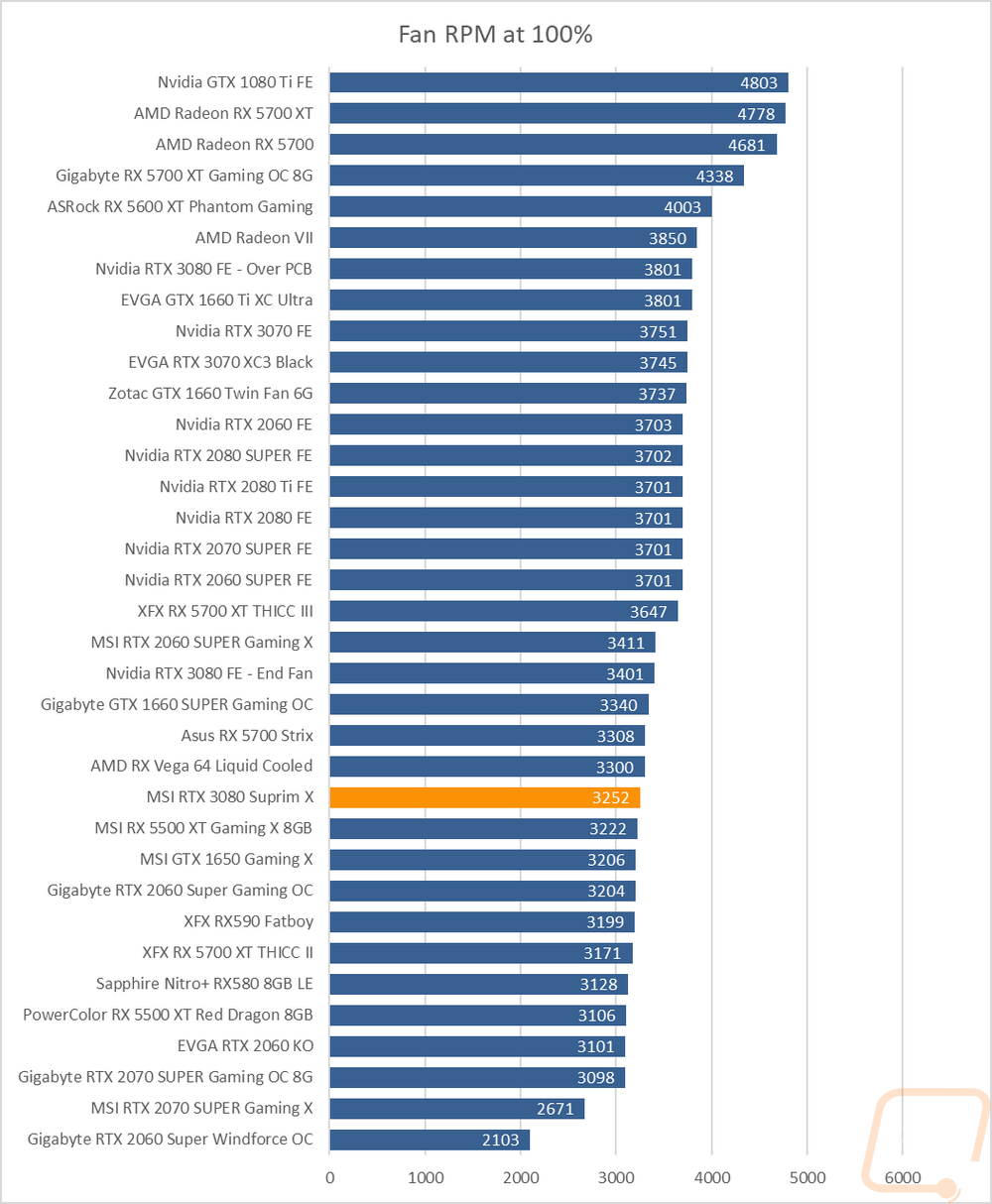 To finish up my tested I of course had to check out the cooling performance. To do this I ran two different tests. I used AIDA64’s Stress Test run for a half-hour each to warm things up. Then I documented what temperature the GPU leveled out at with the stock fan profile and then again with the fans cranked up to 100%. With the stock profile, the SUPRIM X came in at 66c which was 11 degrees lower than the Founders Edition while at the same time having that big overclock and pulling more power. Turning the Torx 4.0 fans up to 100% dropped our loaded temperatures down to 55 which was 3c lower than the Founders Edition. Overall this put the delta between the two at 11c which as you can see the Founders Edition card did have more cooling headroom. But the SUPRIM X still came in below the Founders Edition in both results while also cooling down more heat. 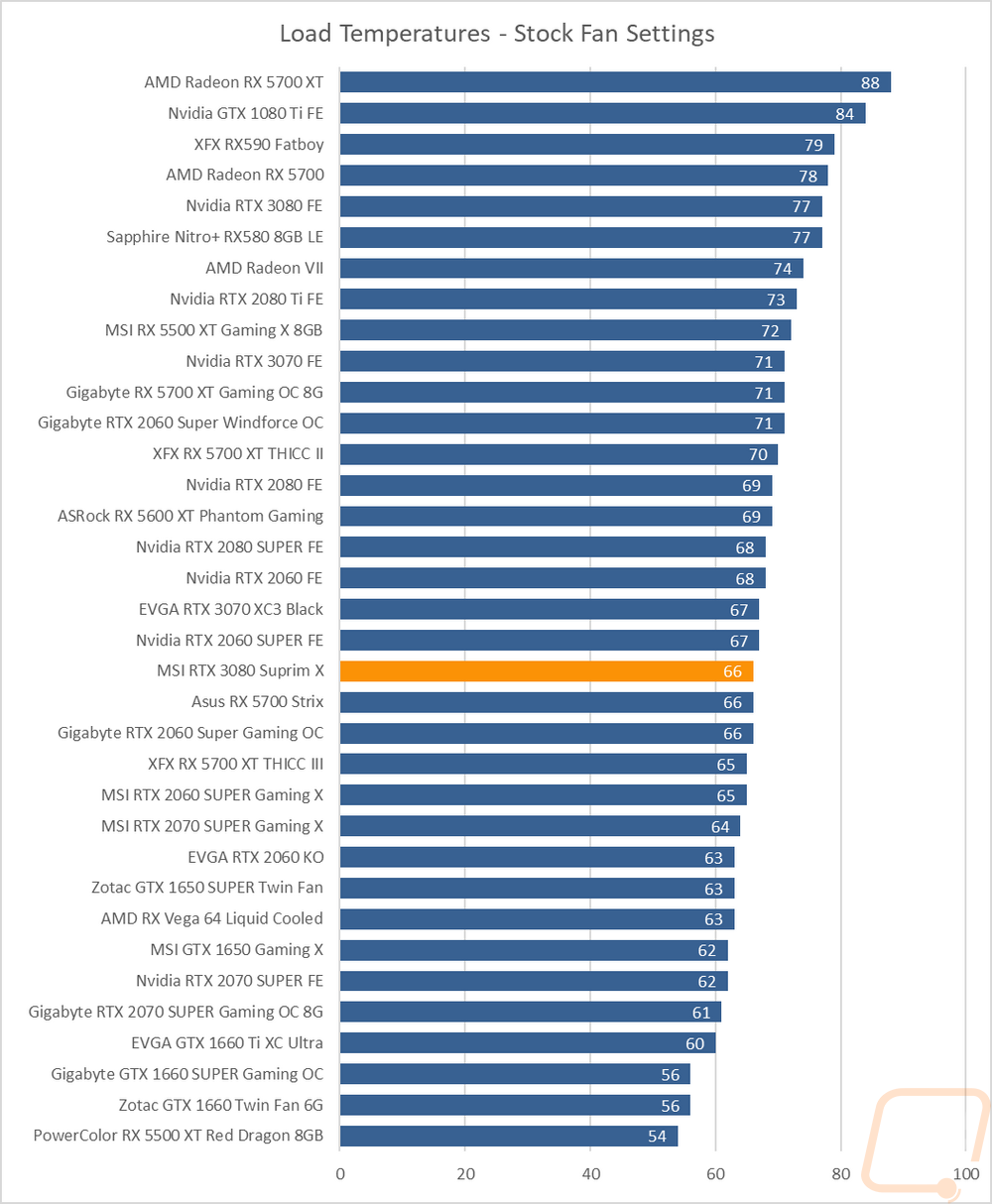 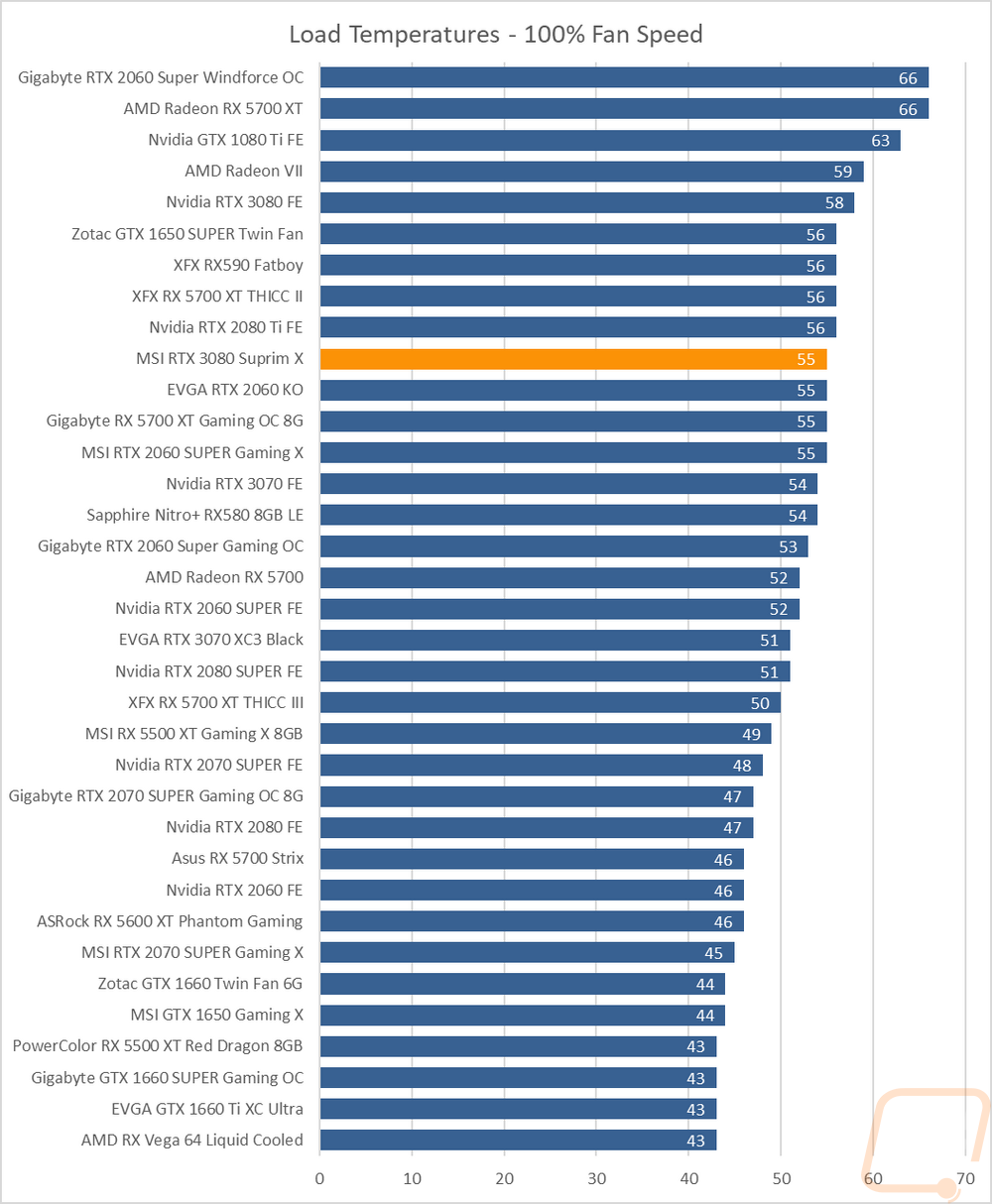 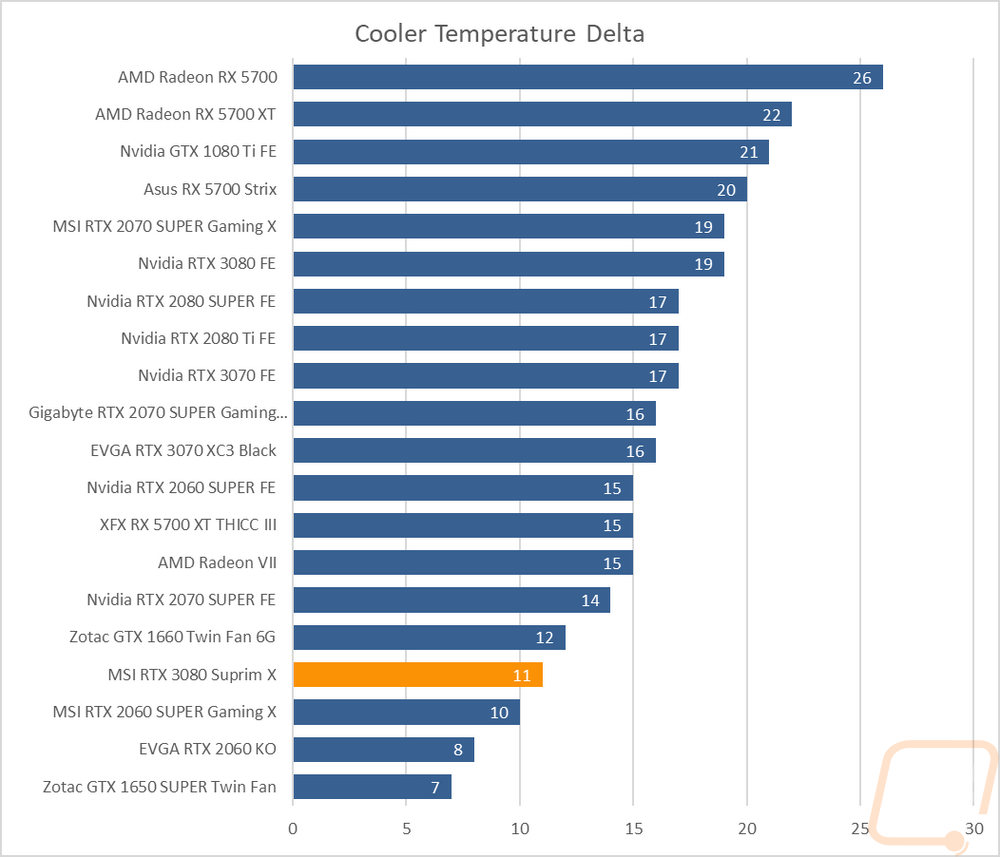 While running the stock fan profile testing I also took the time to get a few thermal images so we could see what is going on. On the fan side, you can see there is a small temperature difference between the left two fans which are over top of the GPU/Memory/VRM but overall it looks like MSI is doing a good job of spreading the heat out across the large cooler. You can also see that the top and bottom venting cooler does have the motherboard and area under the card much hotter, so keep that in mind and try to avoid using an M.2 slot under this card. Top venting looks much cooler, the hottest spot up here is the one section of PCB that is visible in the center but even that at 60c is about where it should be. The backplate look does show the thermal pads working and pulling heat out to the backplate, especially around the GPU where there are four thermal pads while keeping the area directly behind the GPU open to airflow with the opening. 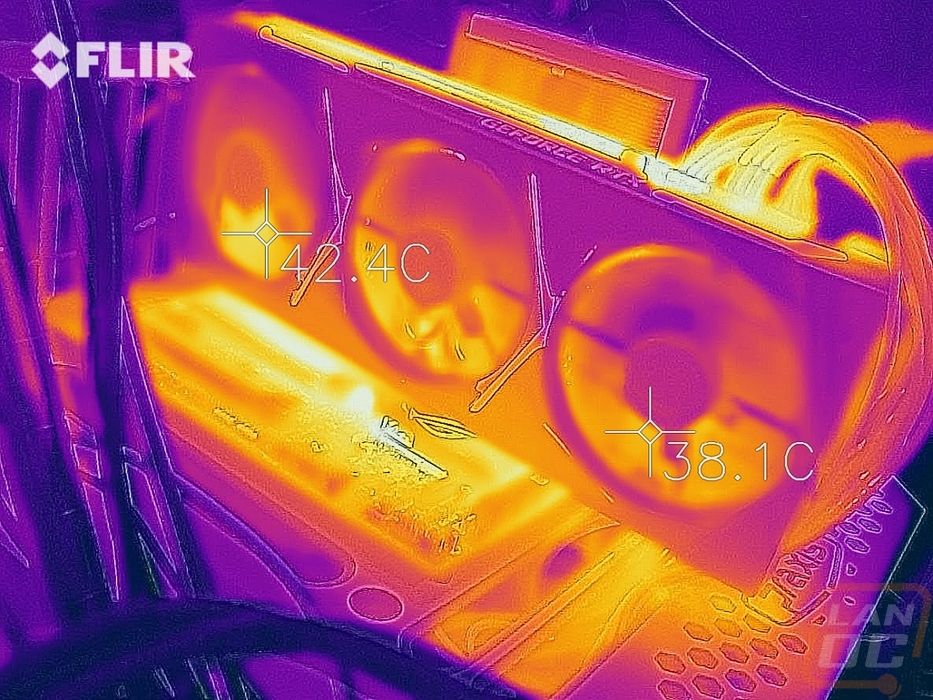 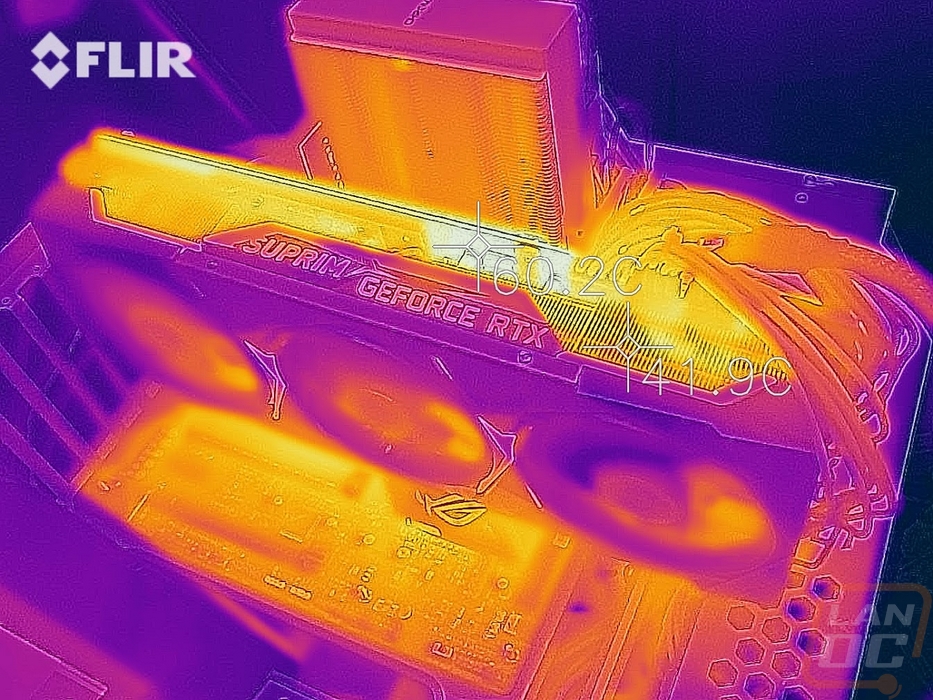 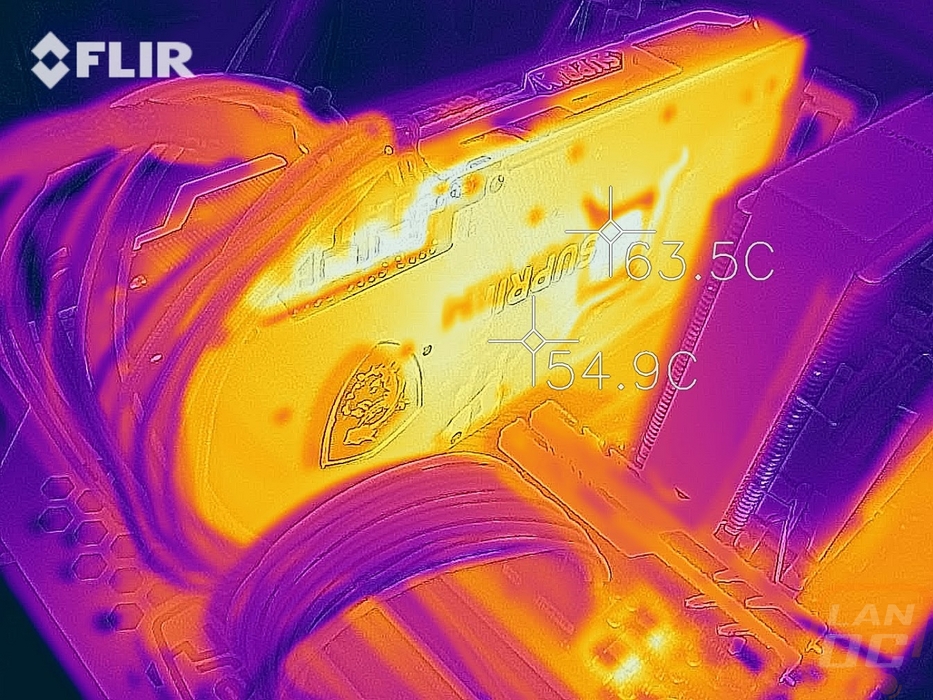