When MSI said they had a new flagship model I didn’t know what to expect. MSI, especially in their motherboard lineup, has lineups that are clean and elegant as well as what are to me a little overdone models with fake carbon fiber and other accents. The new SUPRIM lineup is as far from that as you can get. MSI was spot on with their naming, the RTX 3080 SUPRIM X is of the highest quality and performance. This is coming from someone who has loved what Nvidia has been doing for the past few generations on their coolers when it comes to build quality and construction as well as styling. MSI has taken what makes the Founders Edition models special while also adding in the overclock and cooling performance that the aftermarket cards have had.

The 3080 SUPRIM X does still use some plastic in its fan shroud, but they have also integrated thick brushed aluminum into the shroud as well as the backplate with lots of machined details like the polished gold edges around the fans and the MSI dragon logo on the backplate. The MSI Dragon logo, as well as the SUPRIM branding up on top, are also backlit with addressable RGB lighting. The rest of the RGB lighting is left to small accents between the fans and accents on top which is what I love seeing the lighting being used for. Not just for billboard like branding and nothing else or RGB that covers the entire card. The SUPRIM X ends up being elegant and clean while not looking like every other card on the market by going with a blacked-out design. MSI also took advantage of their brushed finishes to add depth to the backplate and slight angles to create shadows on the front shroud. The only thing about the design that I didn’t like was that the PCI bracket had a chrome finish. I think a flat black bracket would have been nice, or even a painted silver to match the shroud.

The card itself is huge, which is partially how they were able to get such great cooling performance out of it even with the big overclock that it has over the Founders Edition. So keep in mind that you need to make sure it will even fit into your build. I know even for me, I want to try it out in our Crushed build but I’m unsure if I will be able to fit it. Officially the case specifications show that it will be 4mm too short with fans installed. But even just having to account for the triple slot cooler is a concern.

Now we do have to point out that for the RTX 3080 launch and even still today two months later availability of ANY RTX 3080 or Ampere card is very bad. Nvidia had repeatedly relayed our way that demand has just been higher than they ever could have imagined and they recently have stated that it will be in 2021 before we see things start to free up. So MSRP pricing is basically pointless until you can actually buy cards, especially with scalpers selling them for crazy numbers. But the current pricing of the RTX 3080 SUPRIM X has the overclocked SUPRIM model with an MSRP of $899.99. The MSI Gaming X 2080 is listed at $759 which is a big jump. The Asus ROG Strix which seems to be the most direct competition here is $849 which is the same price as the Aorus 3080 as well. Putting the SUPRIM X up at the top of the pack in pricing which may be an issue later if Nvidia decides to fill in the gap between the RTX 3080 and the RTX 3090. But for now, at least does seem to justify its price in the overall build quality. In the end, it most likely won’t matter for another month or two unless you keep a close eye out for a SUPRIM X to pop up. But As long as you can fit the large card and don’t mind the price, it would be a great pickup. 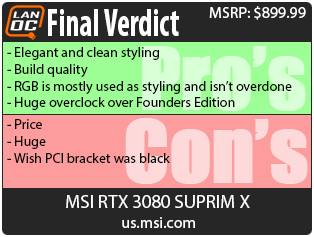 You might call him obsessed or just a hardcore geek. Wes's obsession with gaming hardware and gadgets isn't anything new, he could be found taking things apart even as a child. When not poking around in PC's he can be found playing League of Legends, Awesomenauts, or Civilization 5 or watching a wide variety of TV shows and Movies. A car guy at heart, the same things that draw him into tweaking cars apply when building good looking fast computers. If you are interested in writing for Wes here at LanOC you can reach out to him directly using our contact form.
Discuss this article
Log in to comment
Posts in discussion: MSI RTX 3080 SUPRIM X