After checking out the RTX 3070 Founders Edition we know that the RTX 3070 is a solid performer, competing with the RTX 2080 Ti at a significantly lower price. But what about aftermarket cards? Well, the first one to come in is the EVGA RTX 3070 XC3 Black which is EVGAs lower-priced 3070. Even still it comes with their triple fan layout and their iCX3 cooler. To fit all of that though, EVGA went away from the short PCB that Nvidia used on the Founders Edition and went with a full-length semi-custom PCB. This allowed them to change the power connection down to the end of the card and to go with dual 8-pin power connections over the new 12-pin that Nvidia has been using. This means no adapters are needed and it does fix the weird wiring issue that the Founders Edition had with the power in the center of the card. The downside is to fit the three fans this card is a lot longer than the Founders Edition, 45mm longer to be specific. This most likely won’t be an issue with anyone building in a full-sized case, but for SFF you will want to make sure everything is going to fit. The XC3 is also a touch wider at 2.2 slots but it does mostly stay with the normal PCI height.

Performance ended up being better than I expected. You see, the XC3 has the same boost clock as the Founders Edition. But from the power testing, I can also see that the card is pulling more power. I think more power is allowing the XC3 Black to stick to its boost clock more while under load allowing it to outperform the Founders Edition. It was enough to jump past the 2080 Ti in a lot of the tests that the 3070 hadn’t already jumped it as well. That power usage is something to keep in mind though, as it does mean more heat and over time a higher power bill as well. Cooling performance, even with the extra heat was good. The cooler even has a lot of headroom left if you crank the fans up. Not that I would recommend it, because at 100% they are loud. But that headroom did allow the actual noise performance to be great. It ran quiet.

Styling is good, especially if you like EVGA’s typical blacked out look. There is a touch of RGB with the backlit EVGA logo up top but that is about it. The main downside here, when compared with the Founders Edition, is the XC3 Black’s shroud is plastic (though a thick plastic). They also didn’t include a backplate where the Founders Edition goes all out with a thick metal backplate that gives the card a higher quality feel and better durability.

As for pricing, right now at launch, EVGA has the RTX 3070 XC3 Black on sale for $499.99 which matches the Founders Edition pricing but the official MSRP of the card is $529.99. We are going to have to wait and see how the recently announced AMD cards perform to know how all of this will fit in the market long term. But at least right now, the RTX 3070 is a good value. Offering what was top shelf performance not long ago from the RTX 2080 Ti at a much lower price. While it is still a lot of money, if you are gaming at 1440p or even 4k this might be the sweet spot. The XC3 Black specifically isn’t a bad option as long as you don’t mind not having a backplate. Its performance is solid across the board. Of course, this all depends on availability, which as we have seen with the RTX 3080 and 3090 has been bad. EVGA however has been great in allowing people to get in a queue for orders and doing their best to avoid bots and resellers. 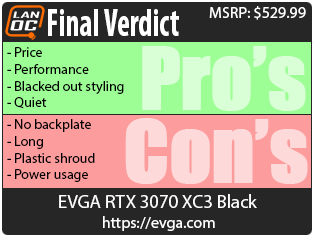 You might call him obsessed or just a hardcore geek. Wes's obsession with gaming hardware and gadgets isn't anything new, he could be found taking things apart even as a child. When not poking around in PC's he can be found playing League of Legends, Awesomenauts, or Civilization 5 or watching a wide variety of TV shows and Movies. A car guy at heart, the same things that draw him into tweaking cars apply when building good looking fast computers. If you are interested in writing for Wes here at LanOC you can reach out to him directly using our contact form.
Discuss this article
Log in to comment
Posts in discussion: EVGA RTX 3070 XC3 Black