For the 3000 series, EVGA did change up the styling on their cards, especially with the FTW model which has full on RGB lighting across the top. Something I wouldn’t have guessed EVGA would have done. Our RTX 3070 XC3 Black is a lot tamer though. The XC3 Black had three fans in an axial layout. The blacked-out shroud looks a little like the last generation of EVGA FTW card, only without some of the additional holes that design had. In line with the fans, there is a scoop shape at the ends of the card that can help pull in air even if the card is a little close to another card, and in between the fans, there is no shroud at all which lets us see the heatsink. The fans are the same design that EVGA has used for a while now with a large EVGA logo in the center and tiny logos all over the fan blades. 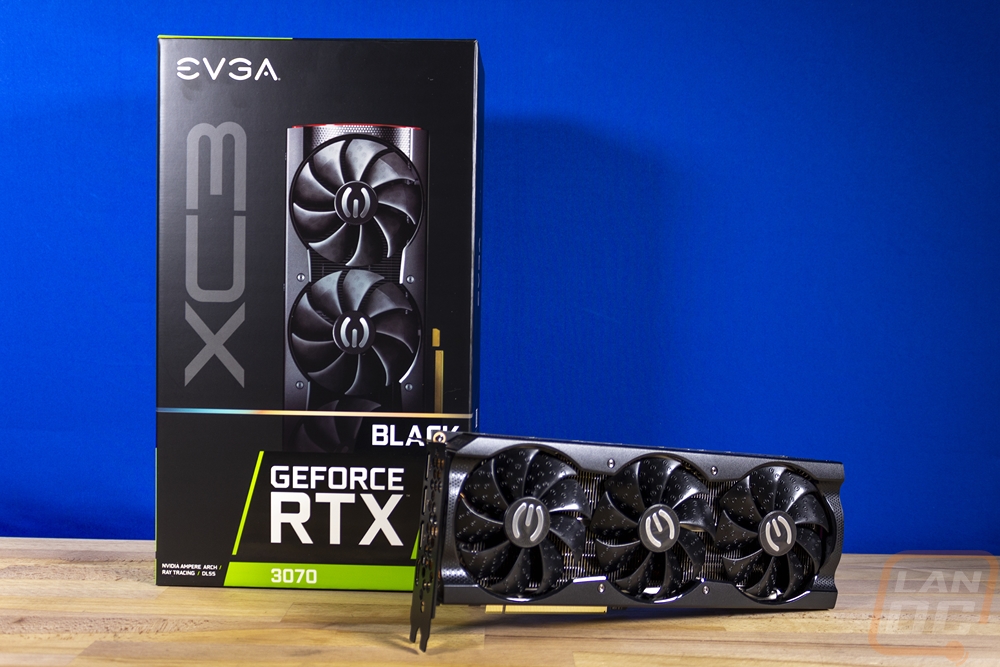 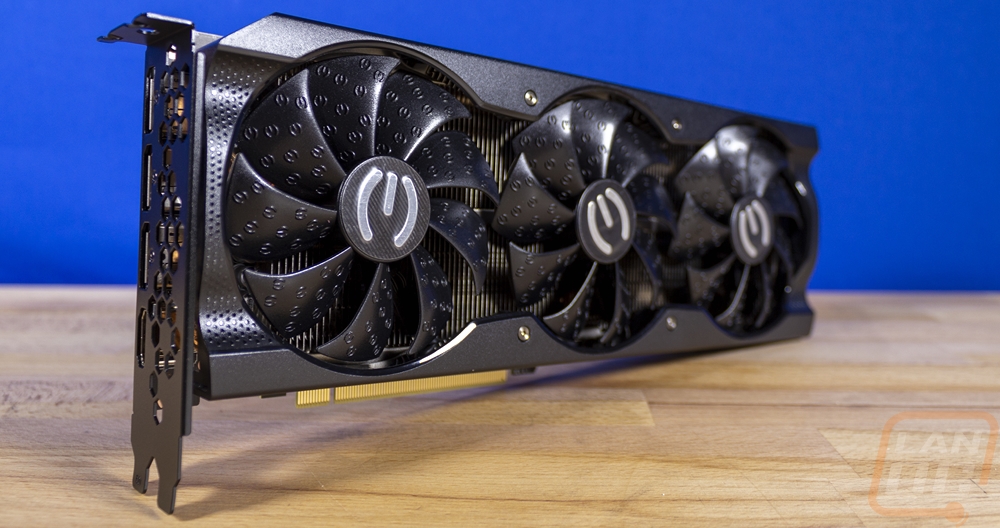 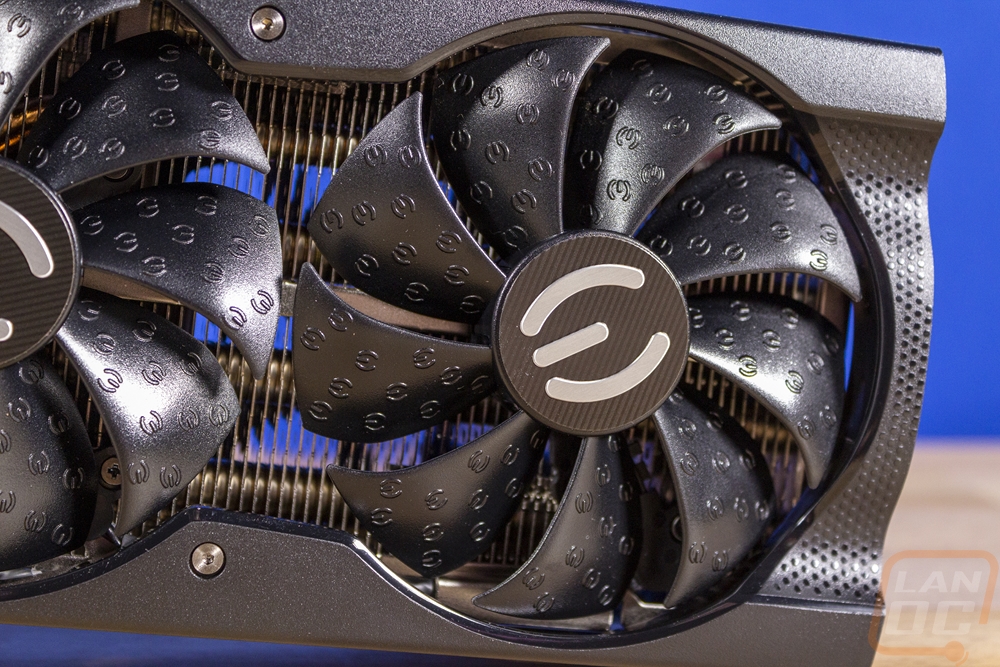 Like I mentioned before, this is a longer card than Nvidia’s Founders Edition. It is 285mm in the specifications which include the PCI bracket from what I can tell because my measurement was 281mm. EVGA has it listed as a 2.2 slot card but it does look like a normal dual-slot card and it is 111.15 mm tall which has it sticking up just past the PCI bracket by about 5mm which isn’t a problem at all. The Founders Edition RTX 3070 was 240mm long, so to get that third fan you need to have room for that additional 45mm. But at 285mm, it should fit in most full-sized cases. 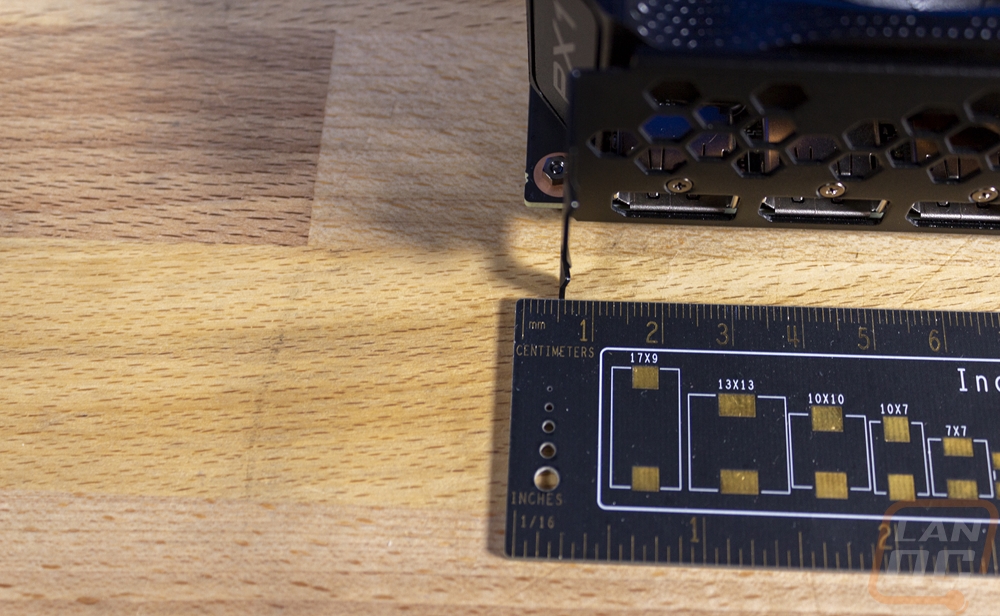 I was really surprised that EVGA didn’t include a backplate on this one. I still consider the RTX 3070 to be a high-end card and backplates are relatively standard most of the time. As far as cooling goes, an open PCB is better, but I like the cleaner look of a backplate as well as the protection it offers. The XC3 Black’s PCB does have a nice flat black finish that doesn’t look too bad and the ventilation cut into the PCB is interesting as well at least so it isn’t all bad. You can see that while obviously a custom PCB, it is still based on the reference design with almost a hard line where the shorter reference PCB would end. EVGA did use the custom PCB to move the power connections to the end of the card and with that also to use the normal 8-pin power connections. Down below that you can also see where they added the three PWM fan connections to the board in this area as well. The longer PCB still ends up coming up slightly short in comparison to the cooler, which sticks out about 10mm. 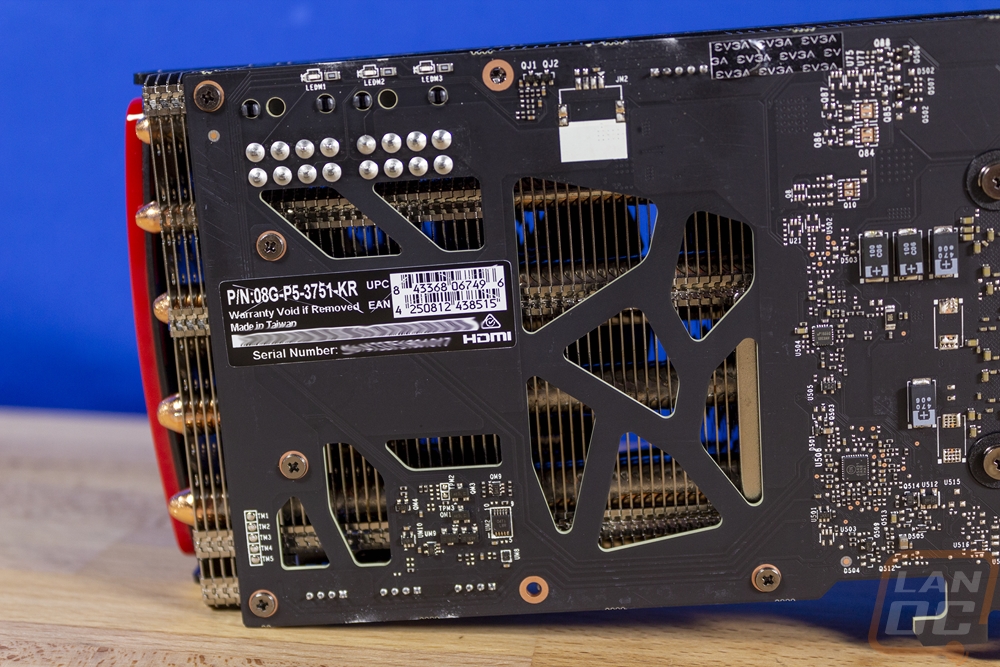 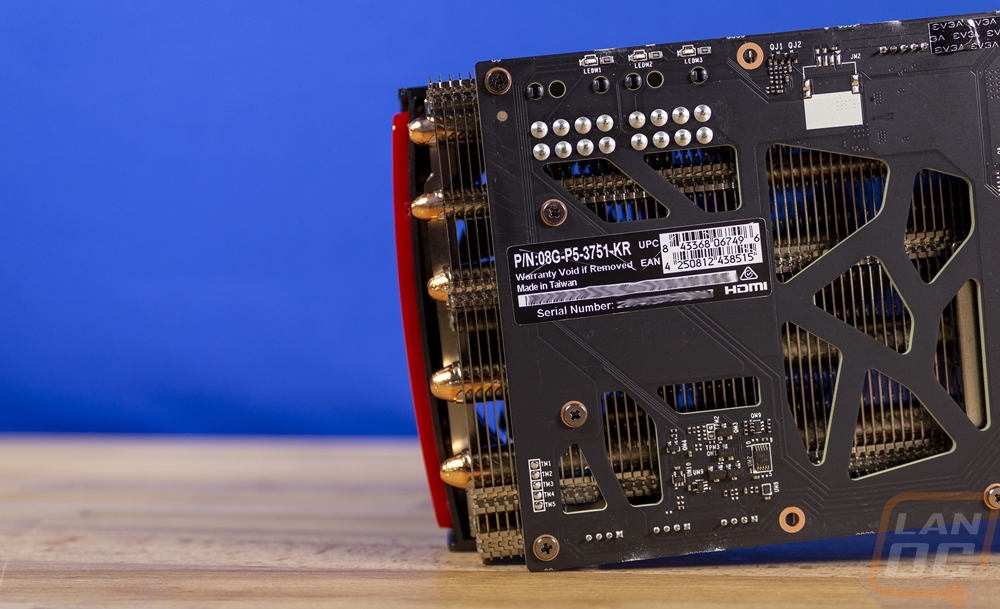 Like I said, for the power EVGA did move it down to a more manageable location but I’m a little surprised they didn’t stick with the new smaller 12-pin plug just to save room for more heatsink. But the two 8-pins mean that you won’t need to run an adapter. I’m also surprised they plugs have the clip side facing the heatsink, most companies have been notching the PCB and putting them facing in for a while now to allow the heatsink to be closer to the power plugs. 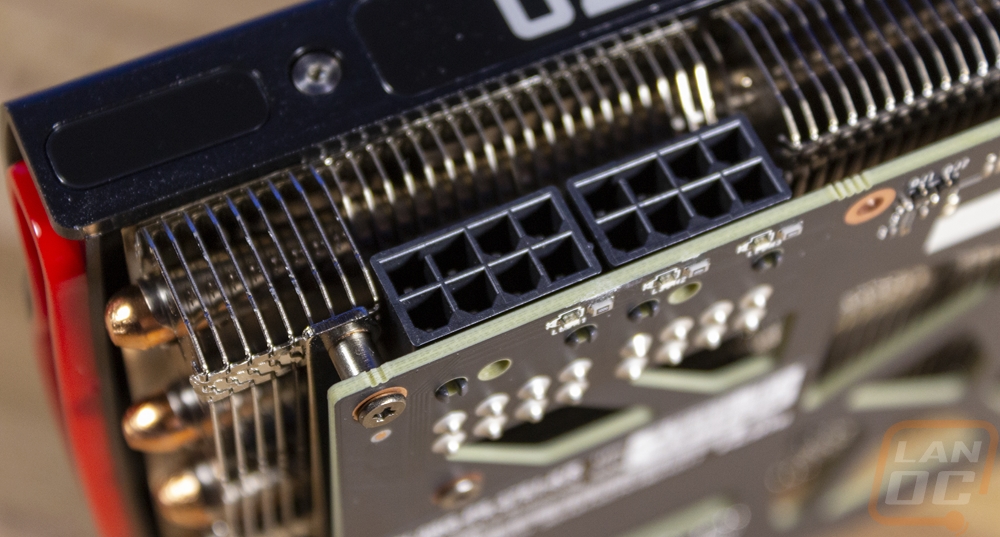 The edge profile of the card does show that it is a hair past the PCI bracket thickness which explains the 2.2 slot listed width. It also gives us a great view of the cooler design which runs the full length of the card and has a horizontal orientation of the aluminum sheet metal design. The RTX 3070 XC3 Black has the iCX3 cooler where last generations 2000 series cards had the iCX2 cooler. The plastic shroud covers half of the thickness of the card but leaves a lot exposed on the top and bottom for airflow from the three axial fans to blow out. This does mean that it will blow out into your case and down against your motherboard, but that is expected with aftermarket cards. The end shows the three thick heatpipes and two smaller heatpipes used to pull the heat out across the length of the card. The end also has an interesting red smile with eh EVGA logo in the middle. It reminds me a lot of old AMD reference cards and the original batmobile. The top edge on the shroud has branding, both for EVGA as well as the actual model name. Far too often you just see GeForce or RTX across the top, so it is nice to also see the model number. The EVGA logo portion is also backlit with addressable RGBs adding just a touch of customization while sticking with the normal subtle EVGA look.

The rear PCI bracket has a full black powder coated finish and for ventilation, they have a random honeycomb pattern. Down along the bottom edge for display connections the XC3 Black has the same layout as the Founders Edition which is three DisplayPort’s and one HDMI 2.1 port down at the bottom.

I’ve mentioned the size difference between the XC3 Black and the Founders Edition a few times but did want to at least show the difference. So here are the two together. That extra 40mm isn’t enough to be an issue in any full-sized build, but if you are building in something smaller you will want to make sure it won’t be ab issue. 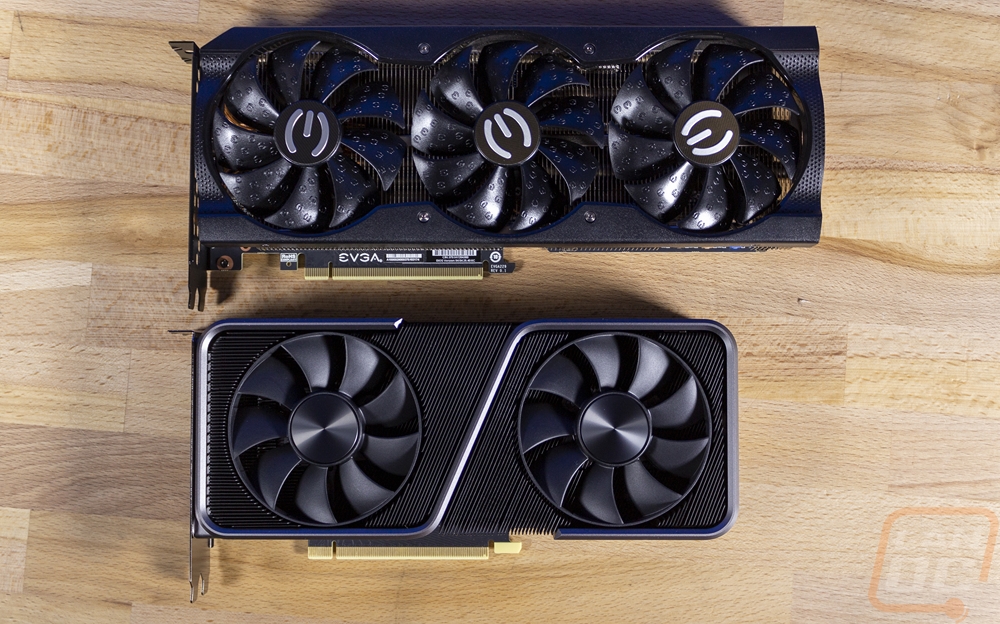 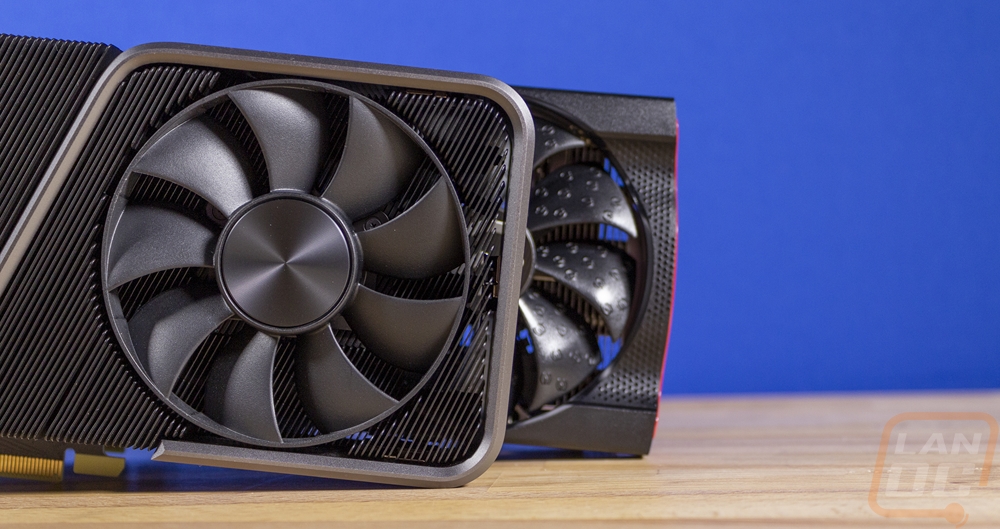 Here is a look at the backlit EVGA logo on top of the card as well when it's lit up. By default, it rotates through colors but it can also be set using the X1 software.