So as I mentioned at the start, the EVGA RTX 2060 KO is a really unique card. You wouldn’t think it would be given that the RTX 2060 has been out for a year now. But the EVGA card ends up being a weird hodgepodge of components. It uses a cooler and PCB from their higher-end GTX 1660 and 1660 SUPER but they have changed the GPU. You would think it would have the same TU106 that the other RTX 2060’s have but it doesn’t, it has a TU104 which is what they used on the RTX 2070 and RTX 2080. The TU104 has additional cores disabled to match the same 1920 CUDA cores as the original RTX 2060 and the clock speed for our 2060 KO is the base model that has the same clock speeds as the 2060 Founders Edition. EVGA does have an overclocked version as well. You would expect then that the performance would match the 2060 Founders Edition, but what I found was across the board it was quicker. Slightly higher power usage and better cooling than the Founders Edition can account for some of that. The significantly higher performance in Blender, on the other hand, is still an unknown. But what you end up getting with the 2060 KO is a card that is a touch faster than the overclocked RX 5600 XT that I reviewed (which didn’t have the higher clocked memory).

It isn’t a huge pro or con, but I have to give EVGA credit for keeping the name simple as well with just the basic KO designation. I’m so tired of the MEGA SUPPER ULTRA OC THICC GAMING being on every single card. The simple name also reflects what you can expect for styling as well. Like most EVGA products they stick with grey and black and lighting is rarely used and in this case, the 2060 KO has no RGB lighting at all. The dual fan design is compact, much more compact than our EVGA 1660 Ti even. I do wish it was a proper ITX form factor though, but with Intel’s NUC 9 push it seems like the 200mm length is going to be the new normal for compact cards. I also like that EVGA included the 2060 branding up on the top edge, it's nice to be able to see what card someone has when they have it installed.

As for pricing, the EVGA RTX 2060 KO was also part of a big push for lower priced RTX 2060’s. Nvidia dropped the price on their Founders Edition cards and the 2060 KO reflects that as well with the stock clock speed model that I tested having an MSRP of 299. The RX 5600 XT that I did a lot of testing against can be found for as low as $279 but the specific card, the ASRock Phantom Gaming is selling for $299 as well which makes the 2060 KO a much better value in that situation given that it did perform better in most games. I do still want to see how the 2060 KO compares with a few of the 5600 XT’s that also received bumps in memory clock speeds and that will come later. Now the availability of the RTX 2060 KO is low, however, the Ultra version as of writing this is available. Given some of the driver issues on AMD’s side right now and with pricing being about the same the EVGA RTX 2060 KO is looking like a great buy! 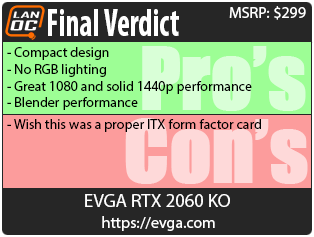 You might call him obsessed or just a hardcore geek. Wes's obsession with gaming hardware and gadgets isn't anything new, he could be found taking things apart even as a child. When not poking around in PC's he can be found playing League of Legends, Awesomenauts, or Civilization 5 or watching a wide variety of TV shows and Movies. A car guy at heart, the same things that draw him into tweaking cars apply when building good looking fast computers. If you are interested in writing for Wes here at LanOC you can reach out to him directly using our contact form.
Discuss this article
Log in to comment
Posts in discussion: EVGA RTX 2060 KO