My last round of tests are all focused on areas that I find important, but don’t always have anything to do with gaming performance like most people are worried the most about. Here I test power usage, noise from the fans, and cooling performance. Once you have decided which GPU model you want, beyond clock speeds, these are the areas where different models from the same company and cards from multiple companies can stand out against each other.

To start things off, I’m going to look at power usage. Stock for stock it should normally be about the same. But when it comes to overclocks, each company has their own idea of what amount of voltage is needed for a safe overclock. More means it can be more stable and with a lot of the auto overclocks these days more voltage can also mean some GPUs will run at a higher clock speed. But it also means more power usage and often more heat as well. To test this I use a kill-a-watt on our test system to measure total power draw in wattage and run two different tests. 3DMark Fire Strike during the combined test that loads the video card and CPU similar to a demanding game. Then I do a GPU only test using AIDA64’s stress test only on the GPU which puts even more load on the video card but doesn’t have any extra CPU power being pulled. In the 3DMark test, the EVGA RTX 2060 KO and our test bench pulled 332 together. This was 2 watts more than the 2060 Founders Edition and 18 watts more than the overclocked RX 5600 XT which is interesting given how on the high end the Navi cards are pulling a lot more and Nvidia’s Turing based cards are more efficient even with Navi being at 7nm. In the AIDA64 test the 2060 KO pulled 254 which was a full 10 watts more than the Founders Edition. This makes me wonder if EVGA, while having the card clocked the same, has a little more voltage going to the GPU which could explain why the KO is a little faster in a lot of the tests I’ve run. 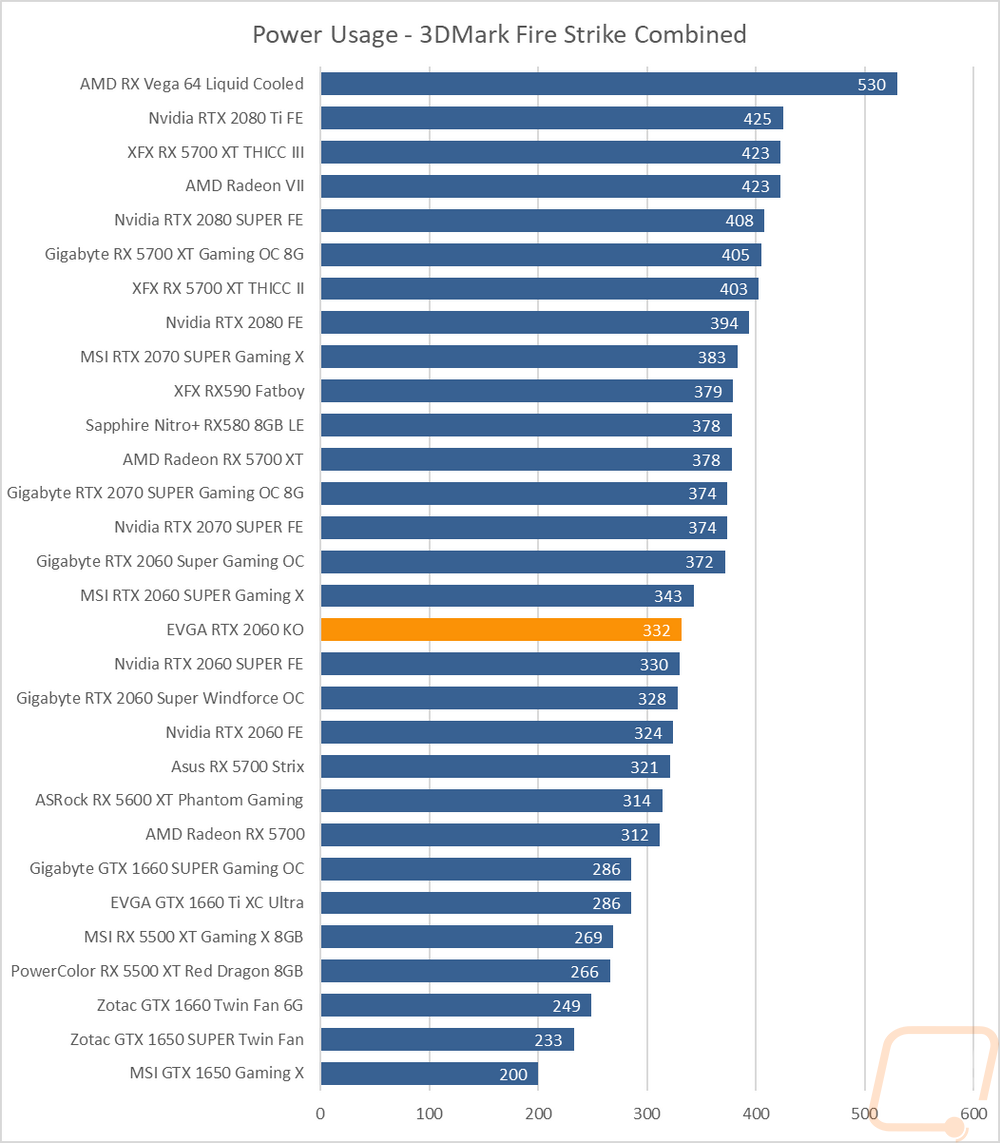 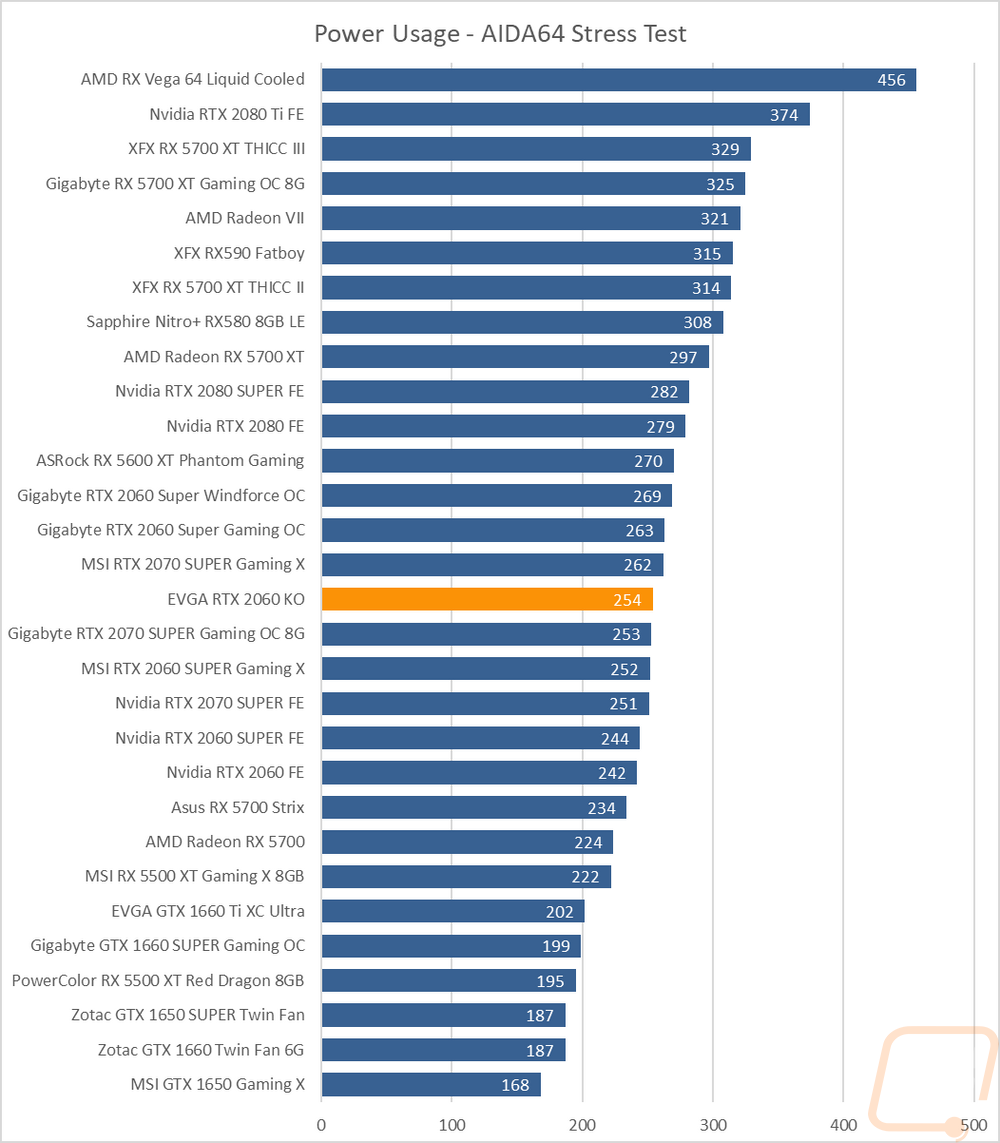 For the next test, I look at the noise output of the cooler. For this, I set up our decibel meter 18 inches away from the test bench and I run three tests. I do a manual speed test with the card set to 50% and 100% fan speeds, which by the way the AMD driver still freaks out when doing this requiring a reboot to get the fan speeds to drop back down. Then I do a third with the card under an AIDA64 load for over a half-hour where I test the noise level of the card in a worst-case scenario with the stock fan profile. In the 100% fan speed test the 2060 KO did really well at 54.9 decibels. The Founders Edition, on the other hand, is up in the upper 1/3 of the chart and the ASRock 5600 XT was up even above that. It did well at 50% fan speed as well, with only three cards quieter on that test. The RPM chart explains why though, even with the smaller card EVGA isn’t running the dual fans at a crazy high RPM, sticking just above 3000 RPM like a lot of the other aftermarket cards. Then the last test is the most important, the worst case under load test which does the most demanding load with AIDA64. Here the 2060 KO doesn’t do nearly as well. Given how well it did in the fixed speed tests it is clear than the fan profile has the fans spinning a lot higher than most cards while under load. Given this is a smaller cooler than all of EVGA’s other RTX 2060’s it may be a cooler limitation but we will find that out in the next test! 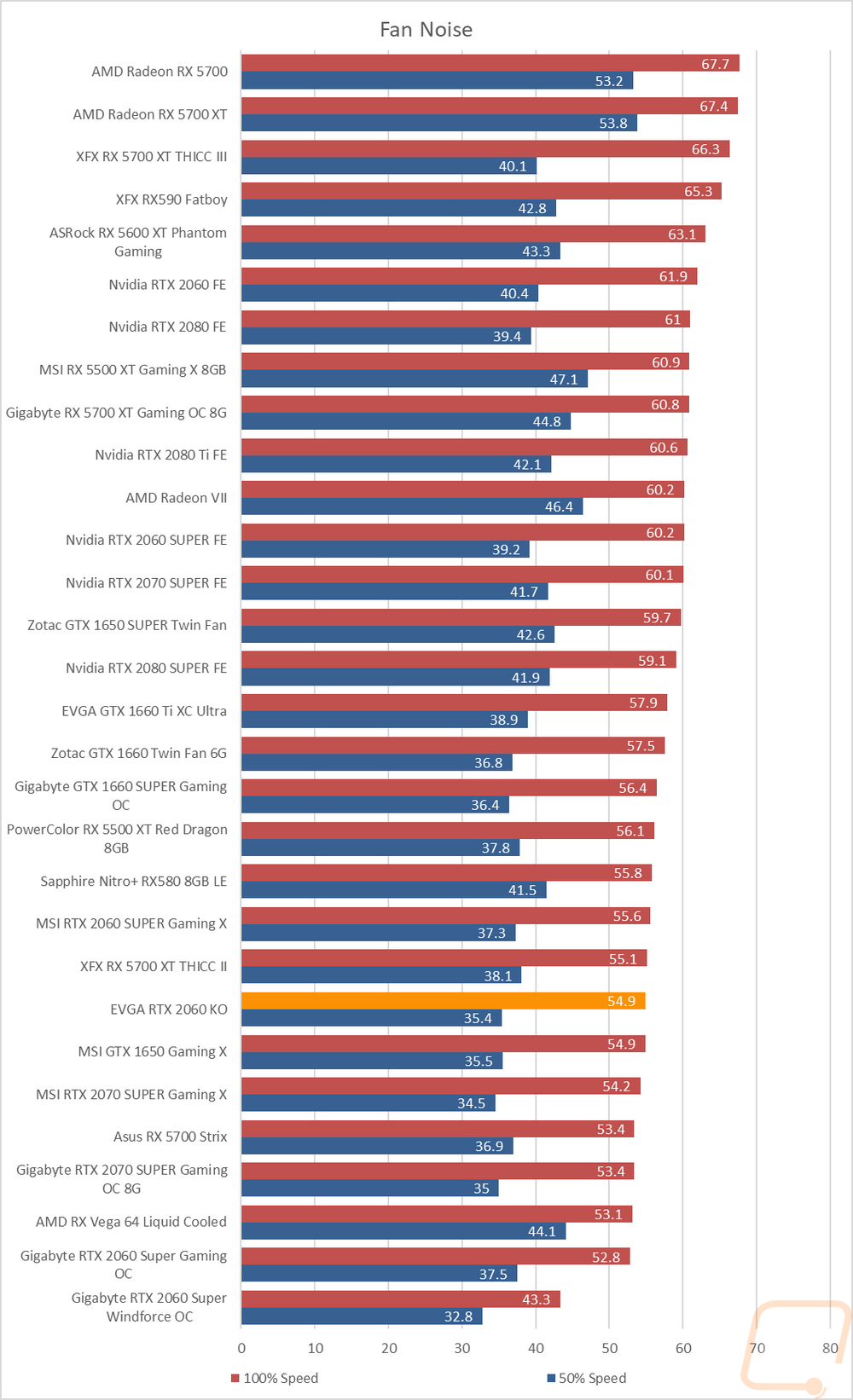 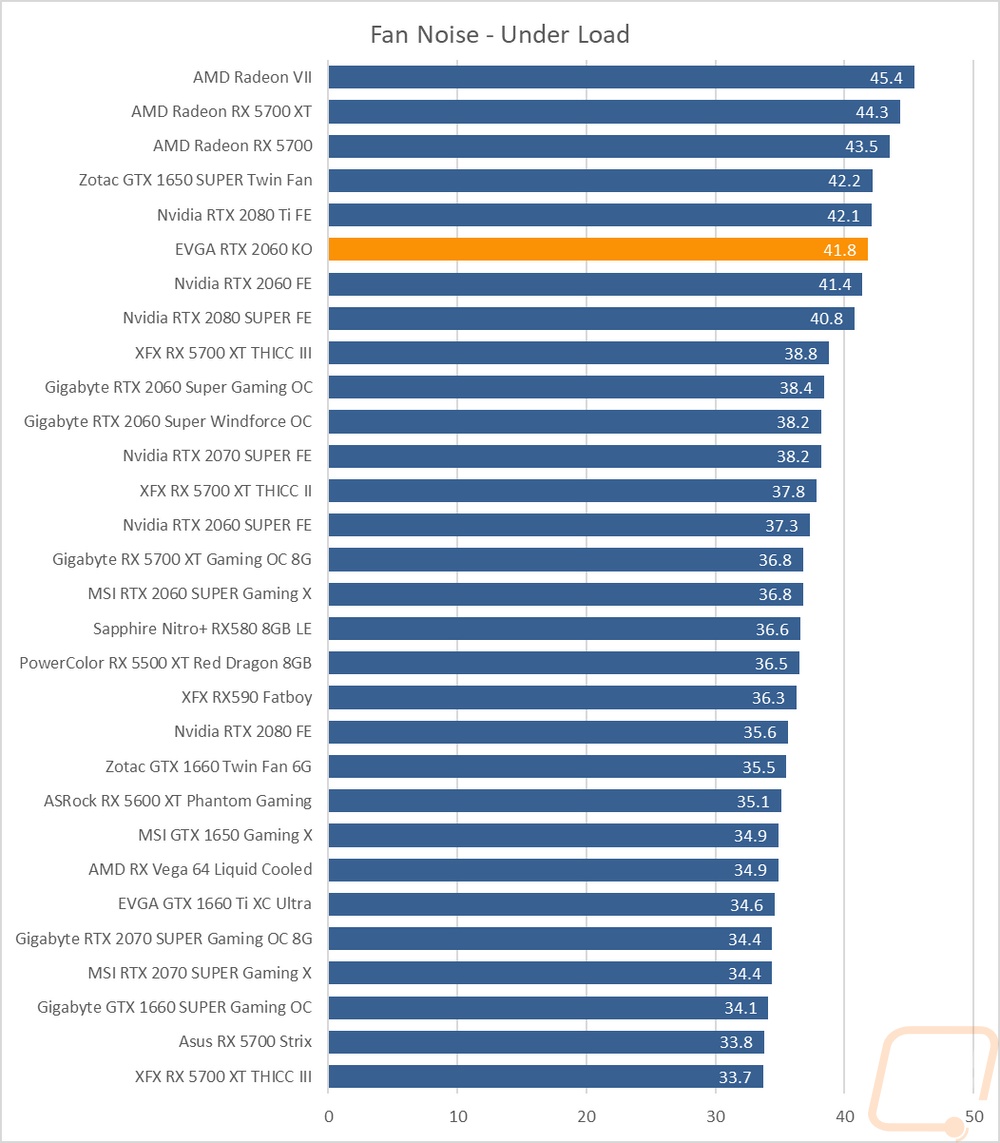 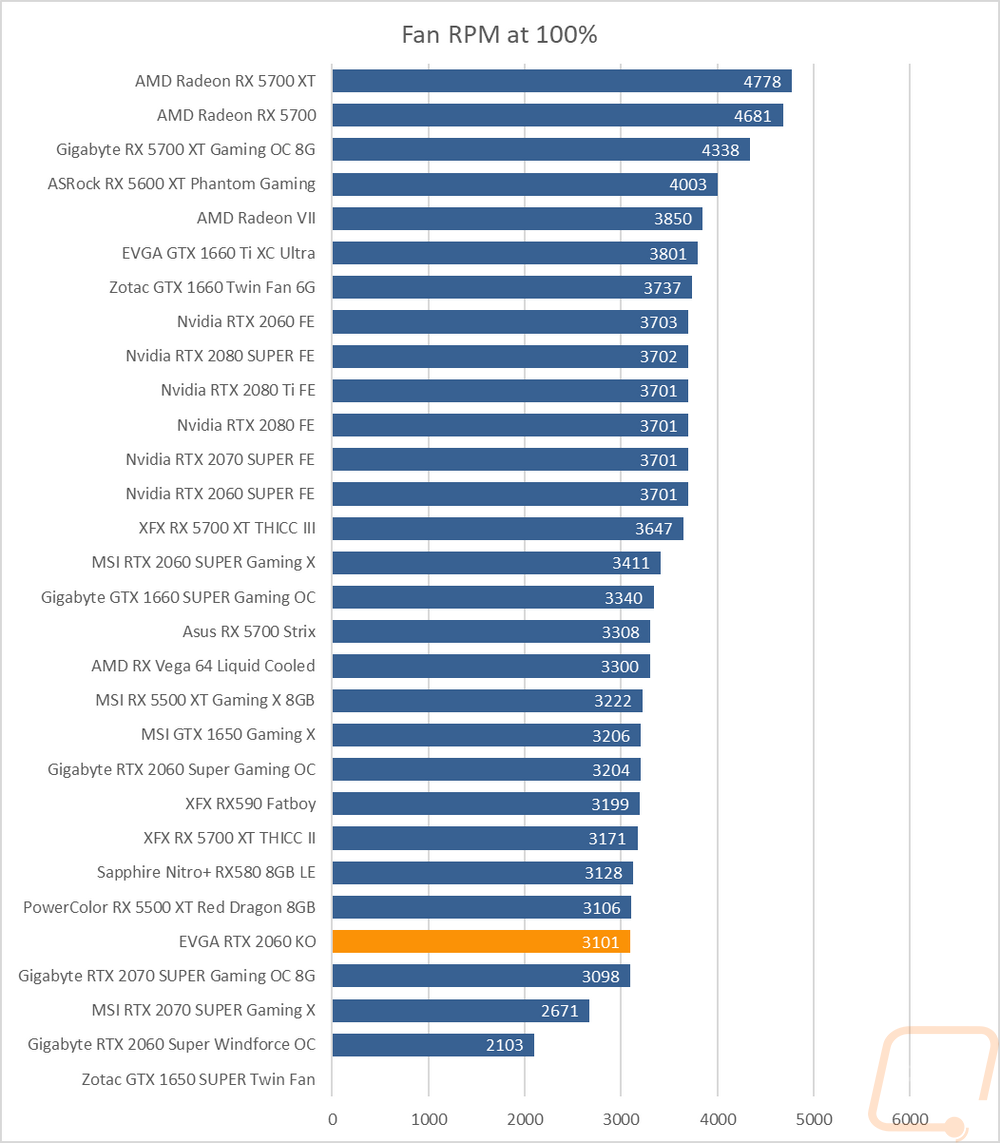 My last set of tests are the most important, thermal testing. For this, I use the AIDA64 Stress Test again. I run the test for a half hour or longer, waiting on the temperatures to level off. I do the test twice, once with the stock fan profile and then again with the fans running at 100% fan speed. This gives us a look at what to expect for temps in a worst-case when gaming and then 100% lets us see how much room is left. So with the stock fan profile, the EVGA RTX 2060 KO actually did well being in the lower 1/3 of the chart. This combined with the noise results from before suggests that the fan profile could be tuned down slightly to calm the noise down by trading off a few degrees of thermals. This is 4 degrees lower than the Founders Edition and 6 lower than the RX 5600 XT. The second test with the fan cranked to 100% fan speed did drop thermals down but 8 degrees isn’t a large delta at all. This is where the smaller cooler design shows, especially combined with the fans not running at ultra-high RPMs like the ASRock 5600 XT for example. So while this card is solid for cooling, there is only a little room left for overclocking. The Ultra model of the KO which bumps the clocks up is going to take some of that and might be a good target overclock. 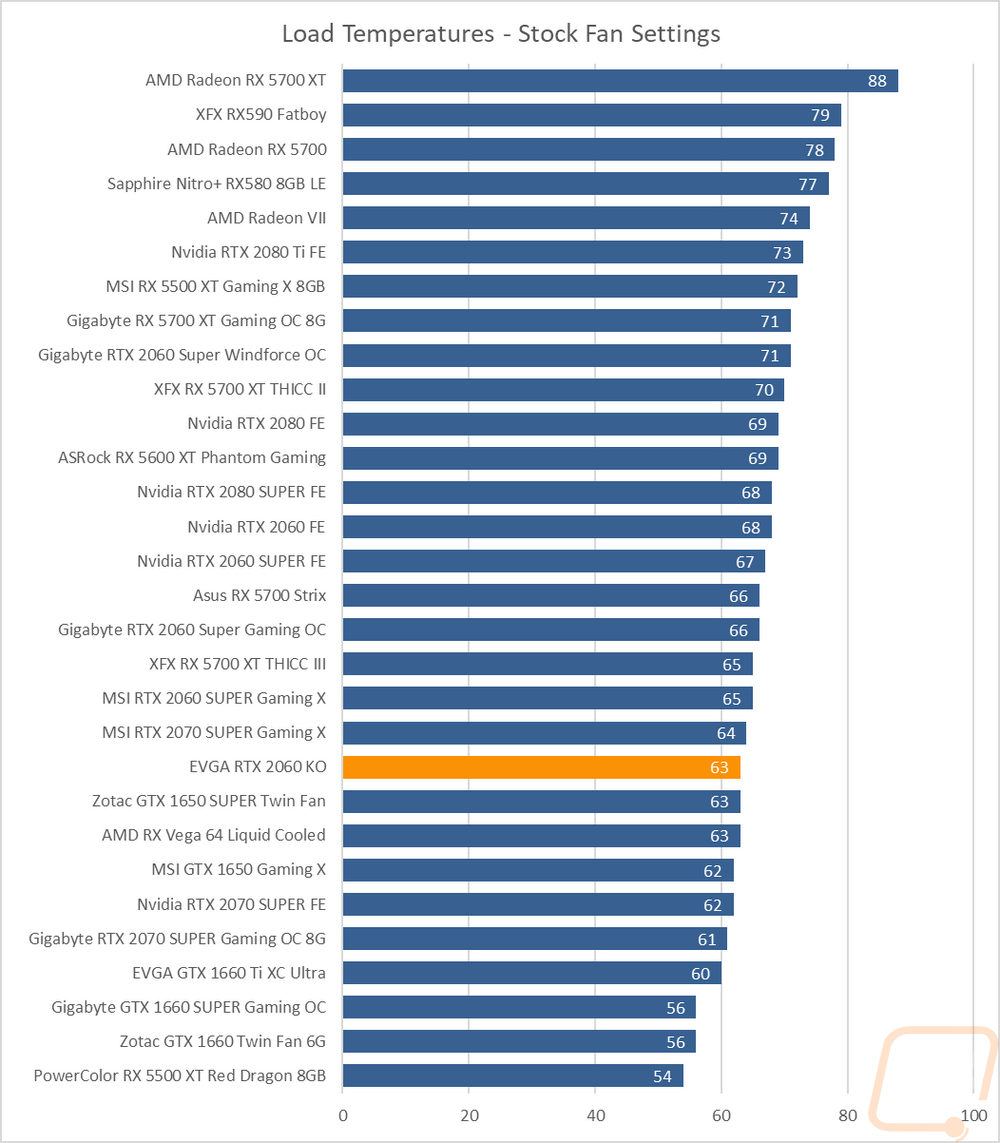 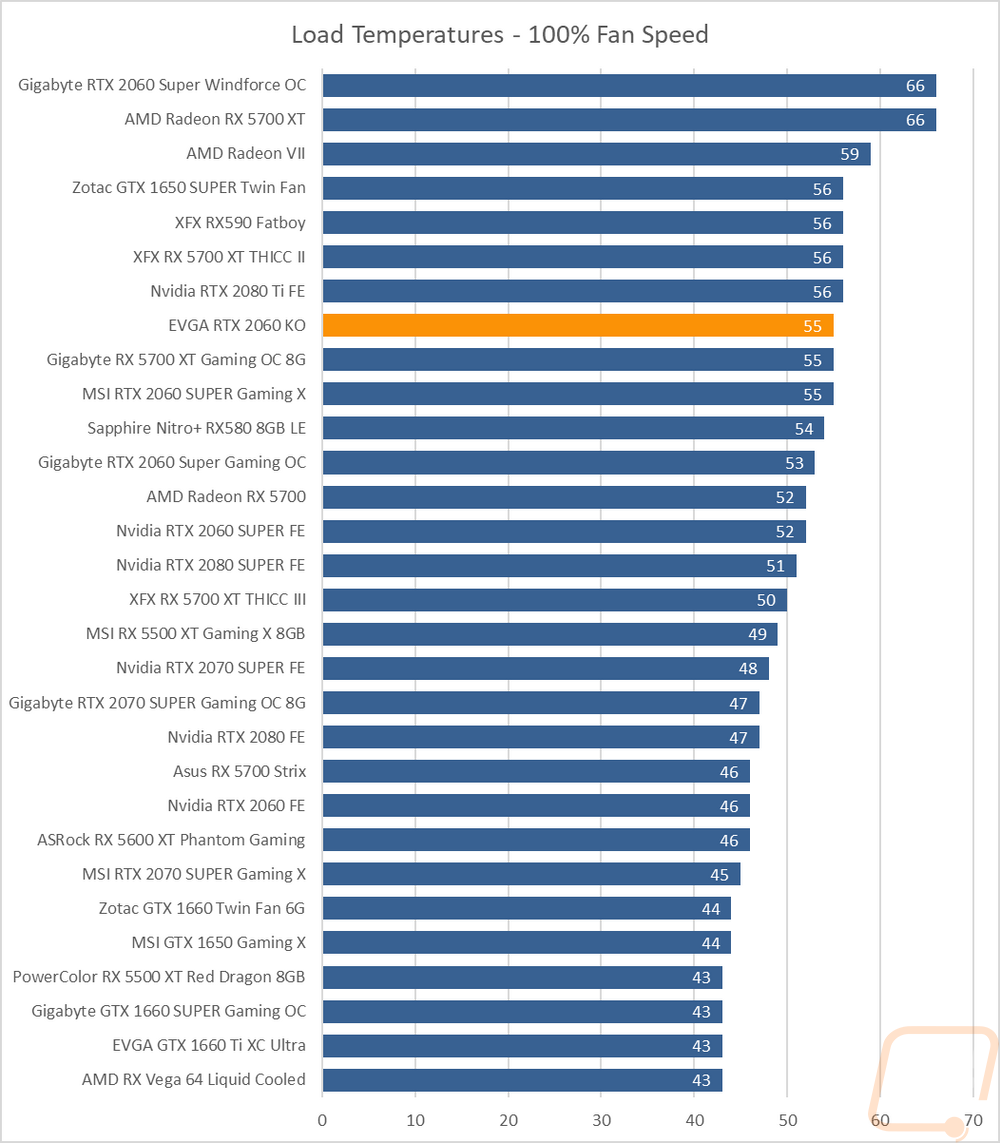 When doing the stock fan profile test, I do also get a few thermal images of the EVGA RTX 2060 KO to see how things are looking. Especially with it actually running a cooler from the lower TDP GTX 1660ti and SUPER. You can see it handling things well on the fan side with the warmer areas being directly over the GPU on the right fans left side and then over the VRM on the far left. You can also see the heat venting out of the top with the axial fan layout and horizontal heatsink fin orientation. This also pushes air down at the bottom which you can see heatsink up the motherboard as well. Keep that in mind when deciding which M.2 slot you use on your board. The metal backplate does seem to transfer the heat a little more and the vent holes above all of the hot areas help as well, you can spot those because they are the hottest spots, with the exception of the bottom edge near where some of the memory are under the GPU which seems to be hot even through the backplate. Looking at the card again I can see there is a thermal pad between the PCB and the backplate in that area pulling heat out on to the backplate. 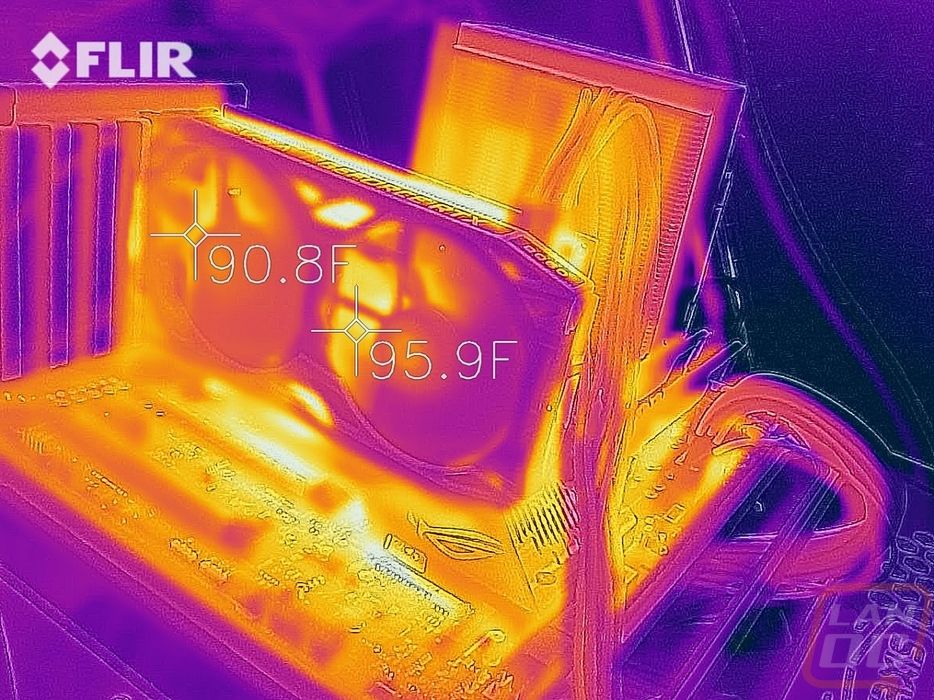 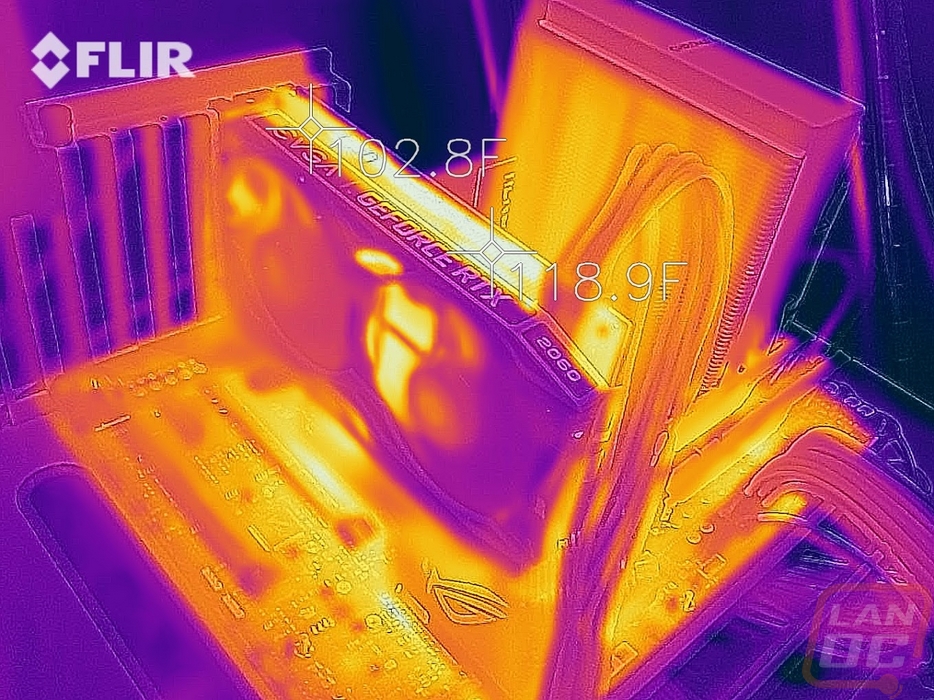 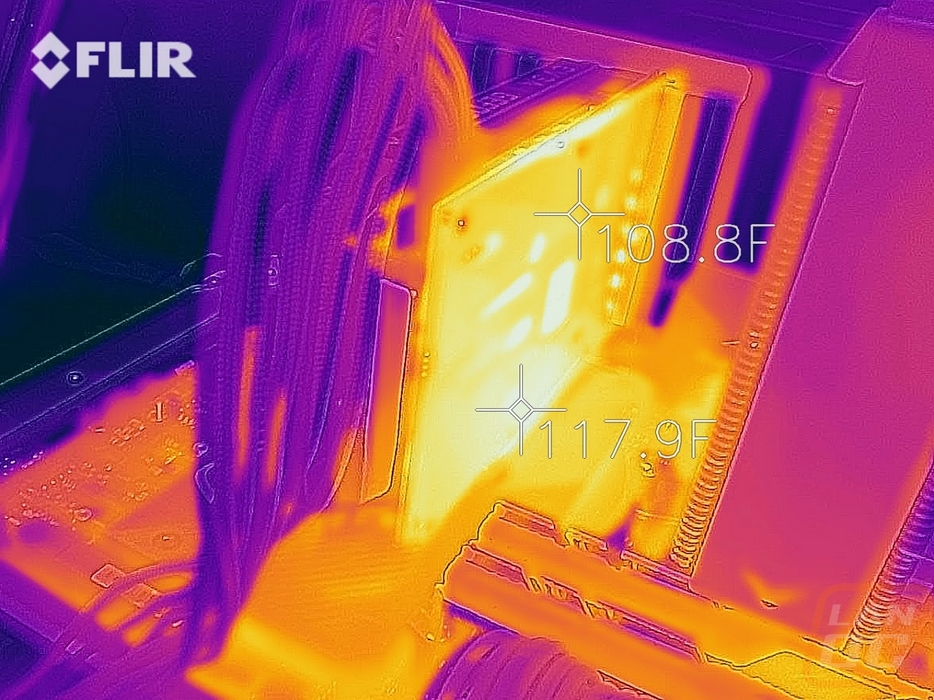 We have 1264 guests and one member online