The EVGA RTX 2060 KO is a very interesting card because not only does it have a cut down or disabled TU104 GPU from a 2070/2080 but they put that on a design that was never used with any of EVGA’s original RTX 2060s. Their RTX 2060 SUPERS were all longer dual fan models and most of their original RTX 2060’s were long if they had dual fans. They did have a shorter model as well but it was a single fan design. This compact dual fan design is actually one of their higher GTX 1660 Ti and GTX 1660 SUPER card designs. In short, the 2060 KO is a GTX 1660 with the GPU, Memory, and Memory controller from the RTX 2060 and the RTX 2070/2080. It’s a little like a motor swap into a smaller car, but this cooler design with the dual axial fans is still designed to handle the heat. The fan shroud is plastic and it shares that same topology optimization styling that EVGA’s higher end cards have but to a lesser extent. 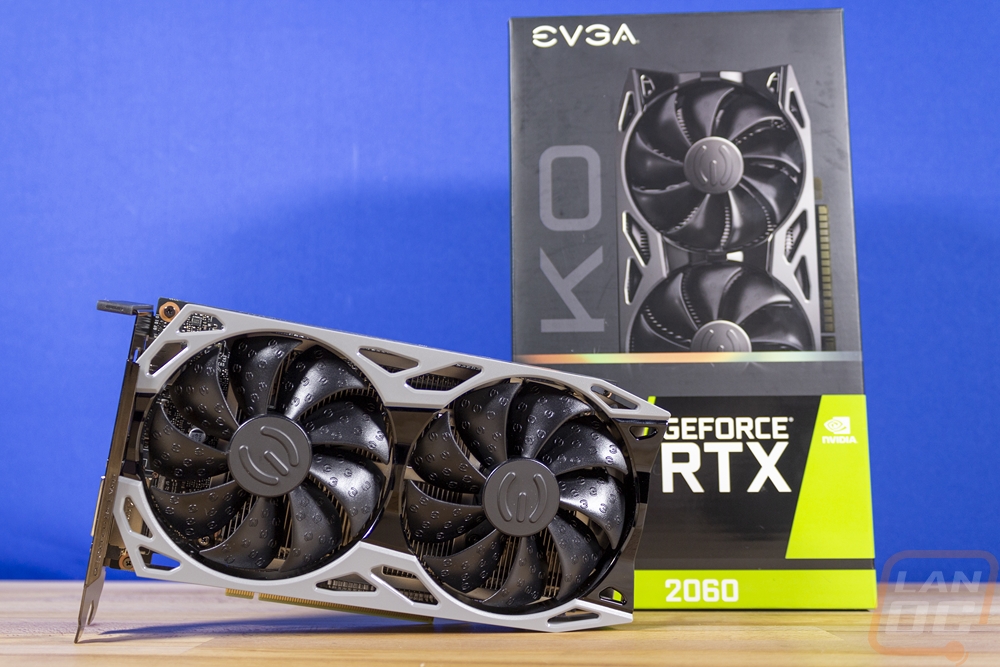 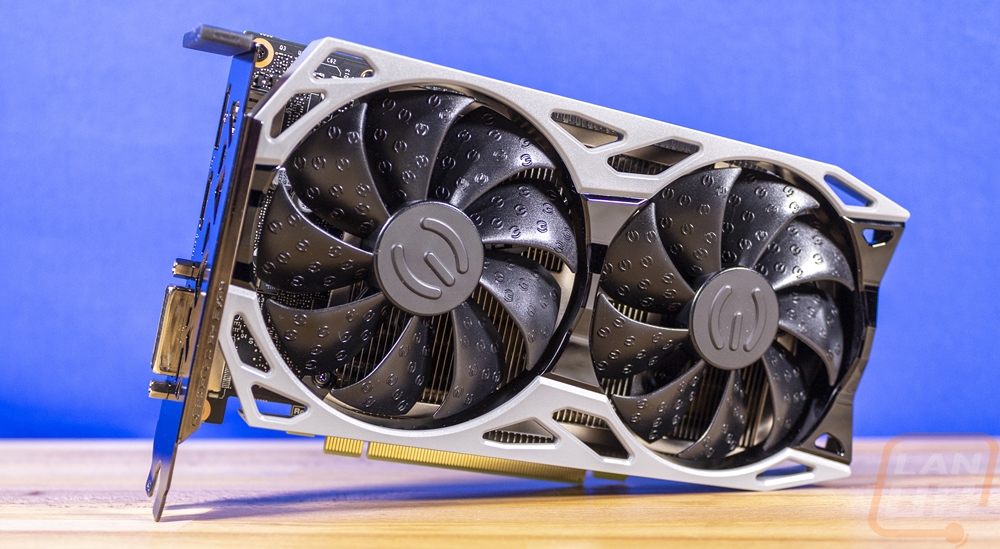 I do like how they used the grey on the top and bottom which wraps around to the bot and bottom as well but they still had some black in the fan shroud that matches the fans. The fans themselves look to be the same as on our much longer GTX 1660 Ti XC Ultra. Putting them next to each other is a little comical though because we know the KO is a better card but the size of the XC Ultra would give you a different impression. The KO has the same heatsink design including the vertical sheet metal design. The GPU is right in the center of the heatsink so both of the fans help with the cooling over that and at first glance, you might even think the cooler doesn’t use heatpipes but they are there, they just use a non-traditional layout that runs horizontal completely, nothing shows on the top or bottom. This does keep them short and I assume efficient and there are only two of them. They don’t run all the way to the left side of the card because of a row of capacitors blocking them. 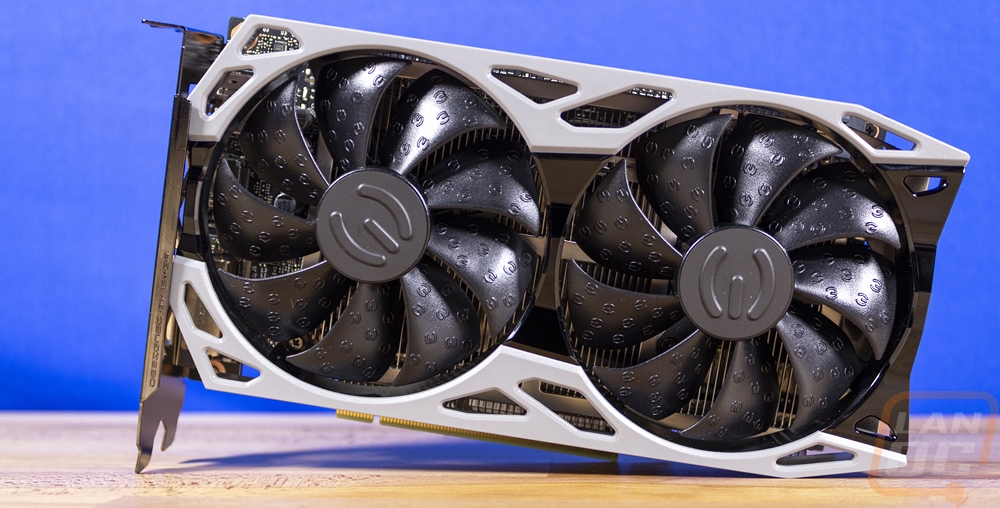 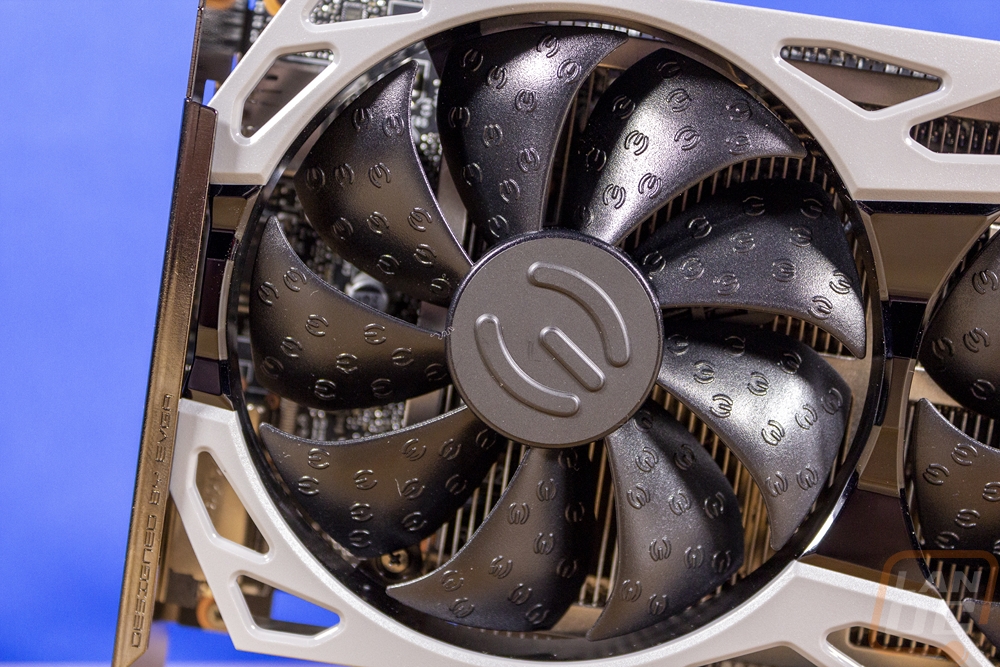 Here is a view of the top, bottom, and end edges. The bent metal plate at the end blocks most of the view on the end, but does add some structure to the card as well as protection. That is the end of a top plate on top of the heatsink that the fans attach too. If you look at the top edge picture you can kind of see the copper heatpipes, they are a flat design. The horizontal design makes them really short but they do both have one bend where they start together when they go over the GPU and split apart towards the right side or end of the card. You will notice a few things about the fan shroud up on the top edge. For starters, there isn’t ANY RGB lighting or lighting at all. No backlit branding for once! EVGA does get their brand on top still but they give even more room for the GEFORCE RTX logo which I like more than just company names and my favorite part is the actual card name is down at the end so when you see this in a PC you can actually tell what card it is, to a point at least. It doesn’t have the KO name on it as well. The bottom view doesn’t really show much other than how the MOSFETs and caps stop the heatpipes and that the heatsink is formed around them tightly. I’m surprised they didn’t put thermal pads on top of them to pull heat away, but the fan is right above them blowing down. You can also see that the memory chips which are below the GPU in the near center and at the end have thermal pads on them to transfer heat, but the pads are extremely thick.

For power, the 2060 KO does stick with the 8-pin power connection and you can see that it is all the way at the end of the card which is also the end of the PCB. Our GTX 1660 Ti XC Ultra had this same PCB but was much longer. They didn’t, however, flip the connection around and notice the PCB like a lot of other cards do to keep the heatsink tighter. They just didn’t run the heatsink up over top of the power connection at all. Which given that this is a proper 2 slot card, unlike nearly every other card on the market anymore, there isn’t much room to fit a heatsink on top of the power plug.

The back of the RTX 2060 KO is also interesting because even though the cooler was first used on the GTX 1660s doesn’t mean they skimped and with no backplate or a plastic backplate. Those 1660 models did get a metal backplate as does the 2060 KO. It is a nice aluminum with a brushed finish as well, not a cheaper stamped sheet metal design. There are a few areas with cutouts for ventilation like directly under the GPU, under the power connection, and all of the VRM as well. Then around all of that, there is a black printed on top of the already black finish which adds a little bit of styling and the RTX 2060 model name is also printed on here as well. You can also see how the fan shroud along with the metal plate at the end of the card does stick out a touch past the end of the backplate and PCB. That endplate is bent to protect the card still and there isn’t any heatsink past the end. Overall the card length comes in at 7.96 inches or 202.1mm which is short. But not ITX short. I would have really loved to see them fit the 2060 into a proper ITX form factor for those of us who are on the lookout for cards to fit in SFF builds like our Sentry 2.0 build. 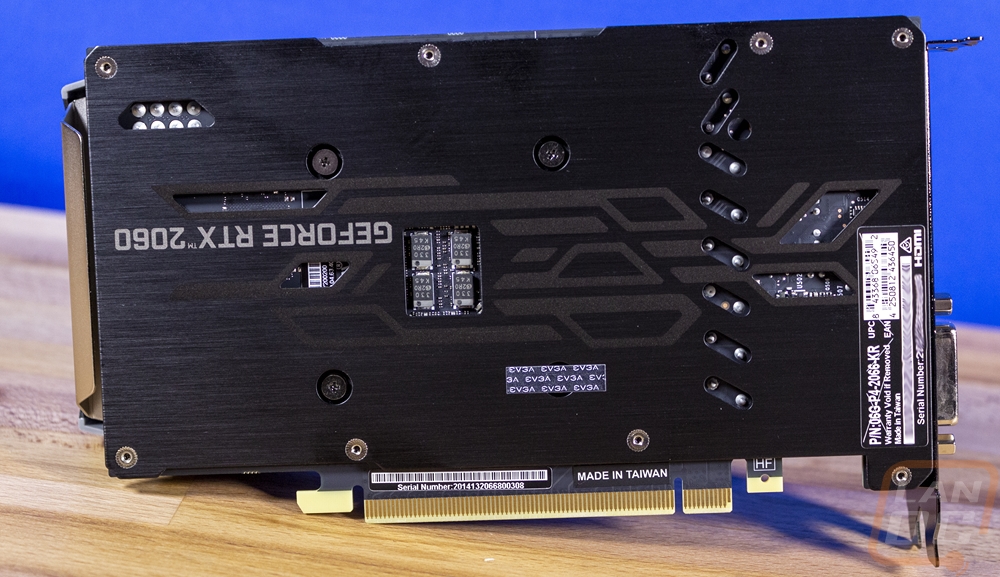 I think the biggest downside of the PCB/cooler coming from the GTX 1660 can be found at the end when you check out the display connection options. A lot of the RTX 2060s get that standard triple DisplayPort and one HDMI layout. But for slightly lower-end cards, fitting a DVI port into the mix is important. This is because people looking for good 1080p performance are often still on older monitors that run DVI. High refresh rate 1080p monitor and 1440p are more often using DisplayPort. With the RTX 2060 falling into the higher end 1080p with high refresh rate in the esport titles DVI is a little less needed. I like having it, but I would love to still see one more DisplayPort. 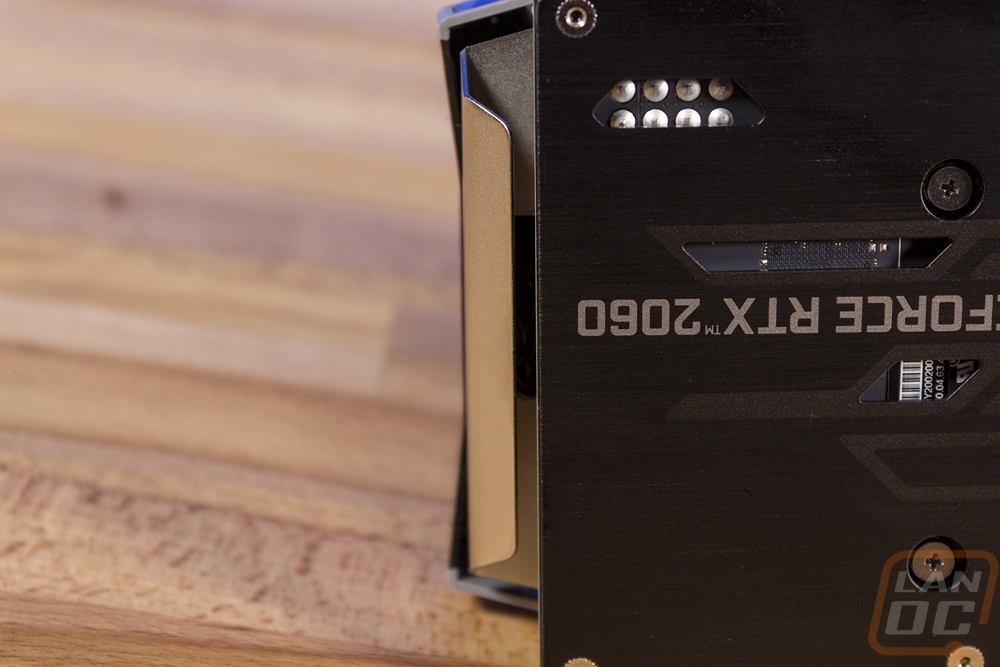