Well, I came into the review looking to find out how much of an improvement adding GDDR6 to the original GTX 1660 would give the GTX 1660 SUPER and what I found was it makes a lot bigger difference than you would expect. The Gaming OC does also come with a big overclock where our original GTX 1660 did run the reference clock speed. But the combination of the two ended up pushing the performance of the GTX 1660 SUPER right up in contention with the GTX 1660 Ti, even though it has more CUDA cores. The SUPER and the Ti were nearly equal in our gaming tests and really only in a few of the compute workloads the Ti would be preferred.

As for the Gaming OC itself, you get the same color neutral styling that all of the Gaming OC cards come with. The triple fan Windforce cooler also impressed in both thermal and noise tests. Being at the bottom of the chart (in the good way) in all of those tests. Noise testing at 100% fan speed was a little louder, but real-world results in the under load tests showed how quiet you can expect the card to be for you in game. The triple-fan design does end up being long to fit all three fans, expecting past the PCB a few inches. Other than that the card does actually conform to the normal PCI 2 slot width and height which is rare these days for video cards. The plastic backplate isn’t my favorite feature, I would prefer a higher-quality aluminum backplate, but given the mid-range GPU I do understand keeping the cost down. The plastic backplate also helps cover the long cooler past the PCB as well. My only other issues were RGB related. Our sample did have an issue with the lighting working, which was a first. But even without that problem, I would still prefer that the Gaming OC cards go with using RGB for accents rather than just using it for a backlit brand logo like they do. So maybe it not working was a good thing lol.

Of course, as always, pricing will make or break this card. The Gigabyte GTX 1660 SUPER Gaming OC was selling at $249.99 but is currently a little higher now that it is out of stock. At the original price it is priced really well with the other GTX 1660 SUPER’s on the market. More importantly, it is priced less than the GTX 1660 Ti’s and at least right now AMD doesn’t have anything to compete in this price/performance range with the RX590 not really coming close in performance and the RX5700 running almost $100 more. So right now at least, the GTX 1660 SUPER is in a great spot, especially for anyone who wants good 1080p performance without the premium that RTX cards will cost you for ray tracing performance. 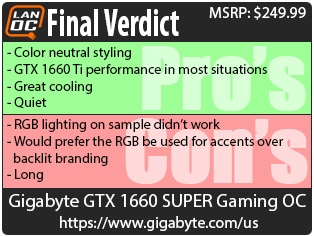 You might call him obsessed or just a hardcore geek. Wes's obsession with gaming hardware and gadgets isn't anything new, he could be found taking things apart even as a child. When not poking around in PC's he can be found playing League of Legends, Awesomenauts, or Civilization 5 or watching a wide variety of TV shows and Movies. A car guy at heart, the same things that draw him into tweaking cars apply when building good looking fast computers. If you are interested in writing for Wes here at LanOC you can reach out to him directly using our contact form.
Discuss this article
Log in to comment
Posts in discussion: Gigabyte GTX 1660 SUPER Gaming OC 6G

We have 1236 guests and no members online