So if you have caught some of my previous video card reviews, this Gigabyte GTX 1660 SUPER Gaming OC isn’t going to look very much different than a few of the other Gigabyte cards that I have tested previously. That is because the Gaming OC model across all of the AMD and Nvidia GPU variations sticks with the same overall look and design. The Gaming OC model means it also has Gigabytes highest overclock on anything Gigabyte branded, Aorus models will sometimes still come in higher. Then for cooling, it has a triple fan design with their Windforce cooling and the plastic shroud. The shroud makes up most of the styling and it has an angular design molded into it that wraps around each of the fans with a flat black finish and then they use grey or silver accents which a lot of today's cards do for that color-neutral look that will match any build, using the RGB lighting to add some color. The accents are on the top and bottom in the center and then there are smaller hockey stick like accents below the left fan and above the right fan. 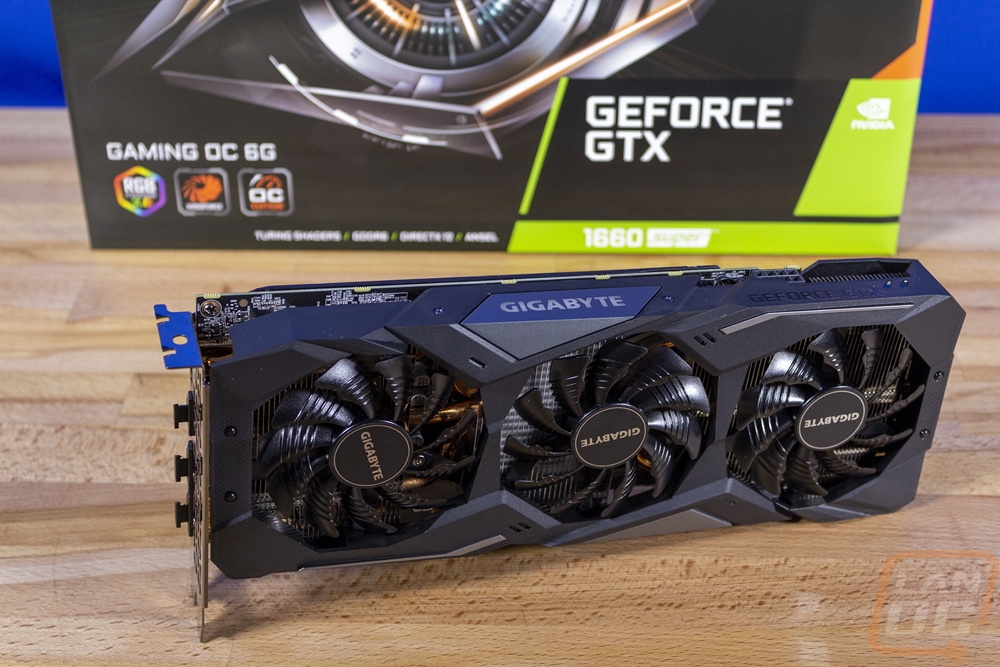 Now with the GTX 1660 SUPER being a much less demanding GPU than say the 5700 XT I can see right away looking through the fans that this cards cooler design is significantly smaller than the 5700 XT that I recently reviewed. The card itself is also much thinner, fitting fully into the 2 slot form factor. But we can see that Gigabyte did still use heatpipes, three to be specific. They run from the center section where they are in contact with the GPU and pull heat out across the card to allow the two outside fans to help with cooling. The cooler also has an aluminum plate that contacts the memory around the GPU to pull the heat from there as well. The Windforce cooler design is unique to Gigabyte and what it does is spin the center fan in its own direction. This means that where the fans are close to each other on both the left and right, the blades now push air the same direction so they can fit three fans without going longer on the card. Normally the fans need to be farther apart to avoid turbulence that makes noise and lowers cooling performance. All three sections of the cooling fins inside the cooler are aligned vertically so the air from the axial fans blows down across the cooler than up and out the top and down and out the bottom of the card. 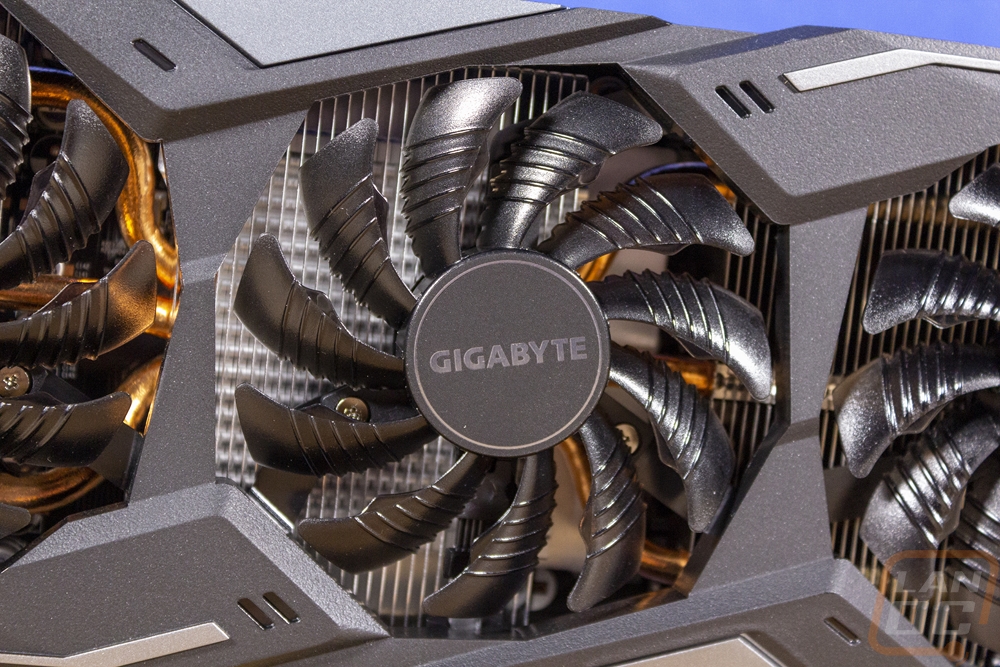 The plastic fan shroud on the front matches the backplate design extremely well here because for this mid-ranged card Gigabyte went with a cheaper plastic backplate. I always prefer thicker aluminum backplates that make direct contact with the PCB with thermal pads for better cooling and this plastic design isn’t going to do that. It is going to be more of a thermal insulator. But going with plastic does mean that they can get more creative with the design, adding in the wrap-around end and some of the molded designs on the backplate as well. It also has the Gigabyte logo in it along with two more hockey stick like accents in grey. 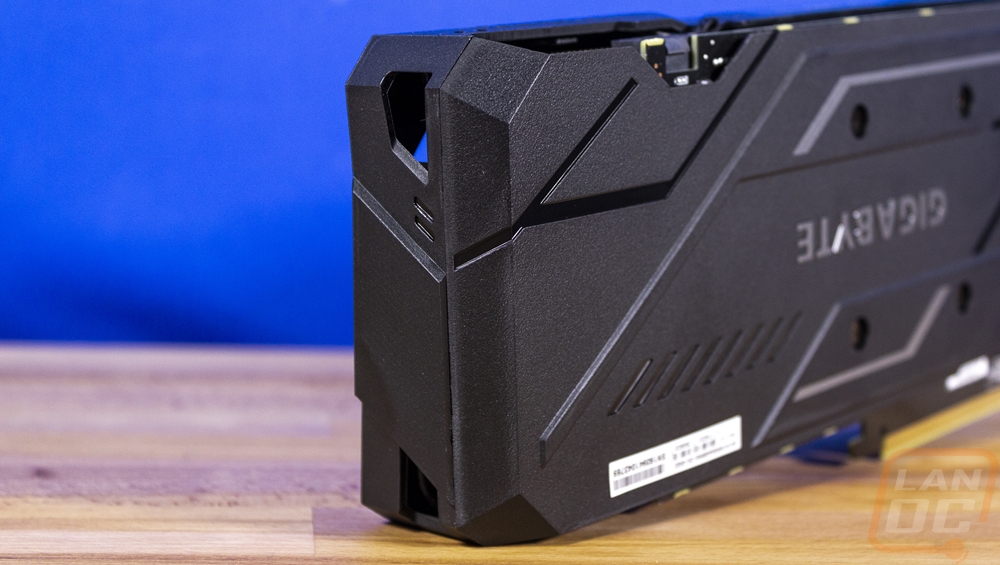 Looking at the GTX 1660 SUPER Gaming OC from the edges you can see that this is a 2 slot card as I already mentioned. You can also see if you look really close the aluminum memory plate from the bottom view and you can see how the three heatsink sections are split up under each of the three fans. There is a decent-sized gap on the top and bottom for the airflow to come out, at least comparable to the thickness of the heatsink which isn’t all that thick once you add the fans on top and the PCB on the bottom.

Also upon the top edge of the card, you can see the grey accent area with the RGB backlit Gigabyte logo in the center. Then down farther, but not at the end of the card you have the power connection. They went with an 8-pin which is the same as the GTX 1660 that I tested original as well. You can also see that the PCB actually ends at the power connection, even though the cooler and shrouds goes on for another 2 inches.

For display connections, Gigabyte stuck with the standard layout. That includes three full-sized DisplayPort connections and one HDMI and that HDMI is slipped in the middle of the other ports. I mentioned it with the original 1660 launch that DVI wouldn’t be a bad addition in this price range. The backplate still has a chromed finish, not the black that some cards are going to and there is some ventilation but the card isn’t really designed to push air that direction either.

So normally I would show off the RGB lighting of the card, but this time around (and for the first time ever) the 1660 SUPER Gaming OC’s lighting didn’t work. Thankfully I’ve had a lot of the Gaming OC cards in previously so we know what you are getting. The Gigabyte logo up on top lights up and that’s about it. I would prefer it to be a cooler RGB accent over backlit branding so having this not work this time around isn’t a huge loss. But I wouldn’t be doing my job if I didn’t at least point out it. 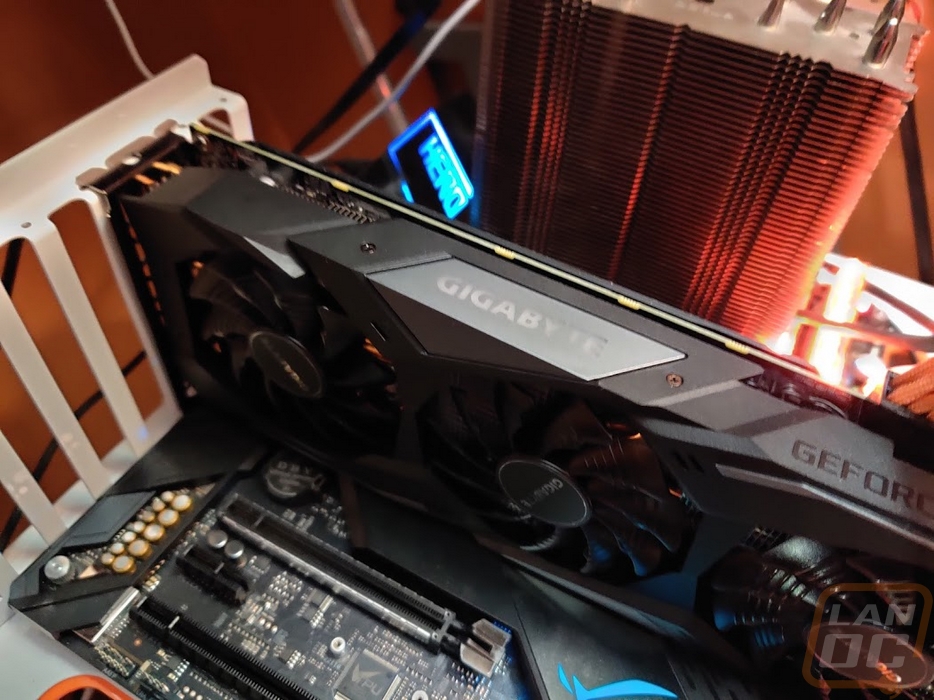 We have 1277 guests and no members online