Without testing out of the way, let’s do a rundown on what I found. The Gigabyte RX 5700 XT Gaming OC looks just like all of the other Gaming OC models that I have taken a look at recently. Aesthetically Gigabyte hasn’t made any changes. That does mean a few things though. For one, this card sticks with the low and long look that they have all had. It is actually the standard PCI height where basically every other aftermarket card just tosses that out the window. It is a touch wider than a normal 2 slot card, but it is still a lot skinnier than other cards, especially the Thicc II. Even the length which is long is still shorter than the Thicc II which is crazy considering Gigabyte manages to fit three fans in that space. The plastic shroud is simple and to the point with a black and grey/silver look. They do have some RGB lighting, but all that lights up is the Gigabyte logo up on top and if I’m being honest I would prefer not to have the lighting at all or for them to up the lighting to give some proper RGB accents.

Performance-wise I was surprised to see that the Gaming OC model which has OC in its name only has an overclock on the base clock speed, not the boost clock. But when it came to my testing, the Gaming OC held its own, outperforming the other two RX 5700 XT’s that I’ve tested in some but not all of the tests. They are surprisingly close together in performance and trade places often in the results. This means you end up with about what you expect from a 5700 XT. It outperforms the RTX 2060 SUPER in most tests, running with the RTX 2070 and sometimes the RTX 2070 SUPER. It drops off with 4k performance more than the Nvidia cards and the same goes in a few of the future looking high detail tests. What that means is you get good 1440p performance and at 1080p you can expect to run higher refresh rates even on a lot of the newer titles.

As for pricing, this model is selling right at the same price as the blower reference cards at $399.99 which makes a big difference in how I view the card. At that price, you are getting a huge cooling and noise improvement over the blower card making this a good value for an RX 5700 XT. It is also included in the current AMD bundles which let you pick from Borderlands 3 and Ghost Recon Breakpoint and you also get a 3 month Xbox Game Pass on the PC. Borderlands looks especially appealing and the Gaming OC performed really well in game in the testing adding a lot of value to the price as well. Nvidia has Modern Warfare bundled with their cards as well, so it ends up being a wash with the consumer winning either way! The RX 5700 XT is still the value card to go with at this price point, performing up with the 2070s that cost a lot more.  Though you are going to deal with, at least in my experience, more driver issues currently with the new 5700 cards. But AMD has been really good in the past about working things out and improving performance even late into a card's life, I can’t imagine that will be any different here. 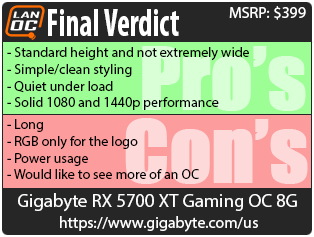 You might call him obsessed or just a hardcore geek. Wes's obsession with gaming hardware and gadgets isn't anything new, he could be found taking things apart even as a child. When not poking around in PC's he can be found playing League of Legends, Awesomenauts, or Civilization 5 or watching a wide variety of TV shows and Movies. A car guy at heart, the same things that draw him into tweaking cars apply when building good looking fast computers. If you are interested in writing for Wes here at LanOC you can reach out to him directly using our contact form.
Discuss this article
Log in to comment
Posts in discussion: Gigabyte RX 5700 XT Gaming OC 8G

We have 1255 guests and no members online