My last round of testing is also one of the most important when you have already decided which GPU you want. You then still have to pick from stacks of different models from all of the different manufacturers. The prices range, some look different than others, and sometimes like with Gigabyte and Asus they also have different gaming specific higher-end brands all together like Aurous. This time around the Gaming OC is still a Gigabyte branded card but with any of those models it is stuff like cooling performance, noise, and power that will set them apart. Short of any exceptional overclock they perform at least mostly close to each other in all of the standard tests. So here I am going to test power usage, fan noise levels across a few different situations, and cooling performance.

Power usage is the first I’m going to check out. For this, I ran two tests. On both, I monitored the power usage of our test system using a Kill-A-Watt. To put things under load I first use 3DMark to replicate a gaming load on both the CPU and GPU. Now the RX 5700 XT’s all pull a lot more power than I would like but I was surprised to see in the 3DMark that the Gaming OC was right with the Thicc II which had a larger overclock, in fact it was 2 watts higher. The same was confirmed in the AIDA64 benchmark as well where it pulled 11 watts more than the Thicc II and almost 30 more than the reference card. The RX 5700 XT’s have been known to perform even better with an overclock for power, it makes me wonder if the Gaming OC would be the same given its small base clock overclock but all of the additional power usage. 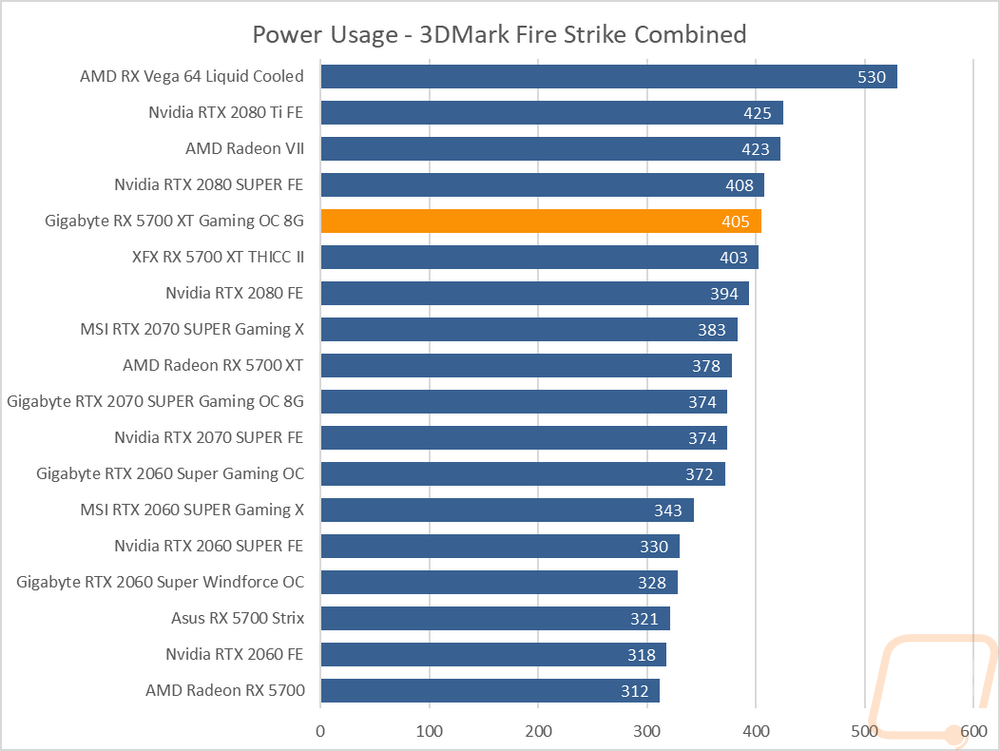 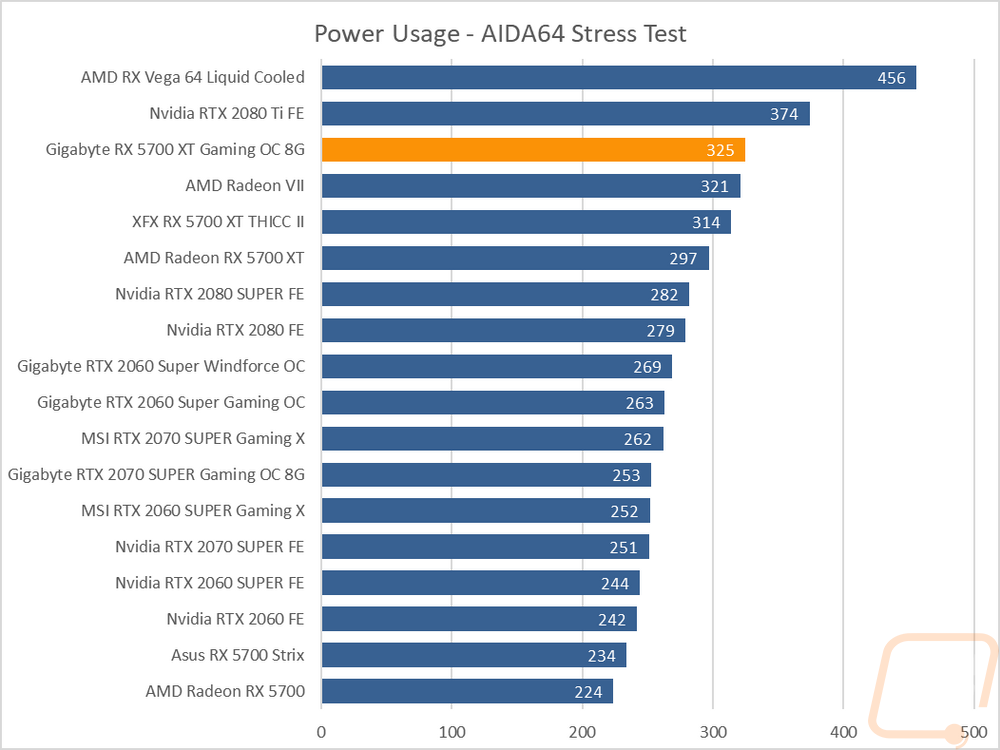 For fan noise testing I run three different tests, all with our decibel meter set out 18 inches away from the fan side of the card. I test at 100% fan speed and again at 50%, both of these are to get a range on what the card is capable of. Then I test when the card has been under full AIDA64 load for over a half hour to see what the worse case noise level is with the stock fan profile. Now the Windforce 3 fan design did come in closer to the top of the charts for the 100% fan noise test. This isn’t helped when we see the RPM chart as well where all three of the fans are only beat by the two AMD blower reference cards for RPM at 100% fan speed. Thankfully even if louder than the Thicc II, the Gaming OC still isn’t up in the same level as the reference blower 5700 XT. In the more realistic load test however the Gaming OC actually did really well, being the quietest of the three cards tested and I shouldn’t have to remind you how big of a difference 36.8 decibels is compared to 44.3 of the reference card which was extremely loud. The Thicc II isn’t far off from the Gaming OC as well. 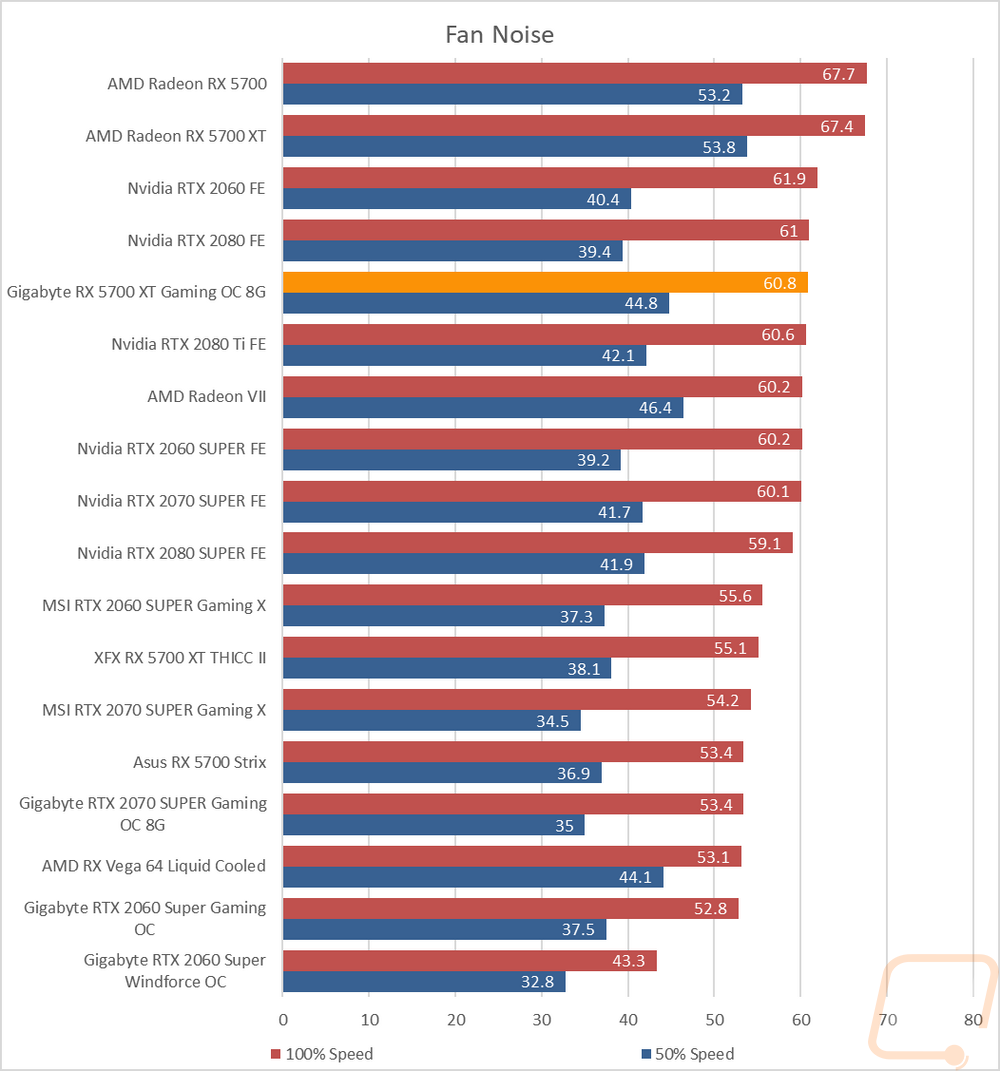 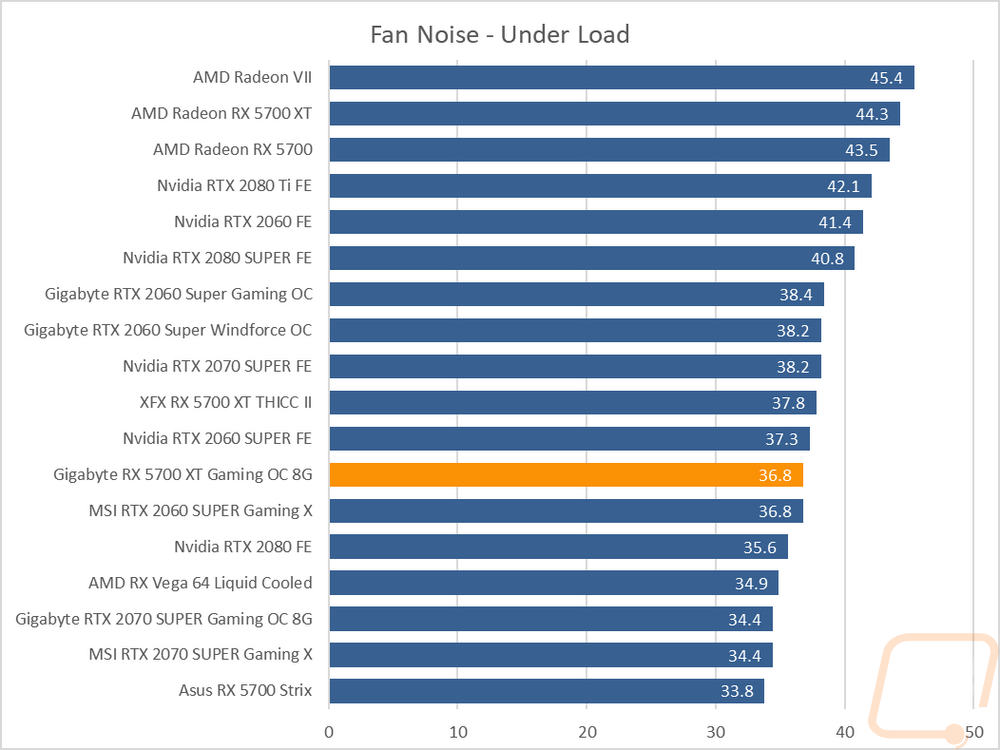 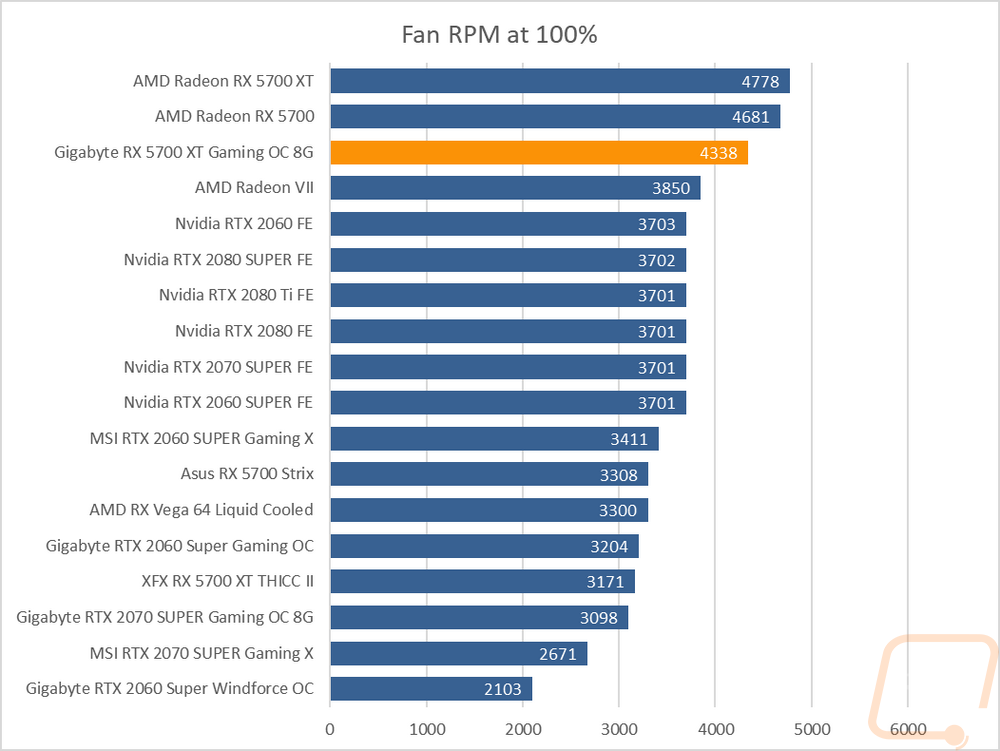 For thermal testing, I use AIDA64 again to load up the GPU. I run two tests, one with the stock fan profile and another at 100% fan speed. The idea is to see what you will get out of the box but also to see how much more room is left in the cooler. The Gaming OC under load for over a half-hour leveled off at 71 degrees Celsius which wasn’t all that impressive. In fact this was one above the Thicc II but both are still well below the scorching 88c of the blower card. Gaming OC cards in the past have performed a lot better, but this doesn’t tell us if it is the fan profile or the cooler. The 100% fan speed test does though with that 71c dropping down to 55c, a nice improvement and one degree below the Thicc II. Overall there is room for improvement, but you can also see the limitations of the shorter design that the Gaming OC goes with. Taller and wider cards can fit a lot more cooling capacity, not that the Thicc II did in its much larger size, which does say something about the Gaming OC. 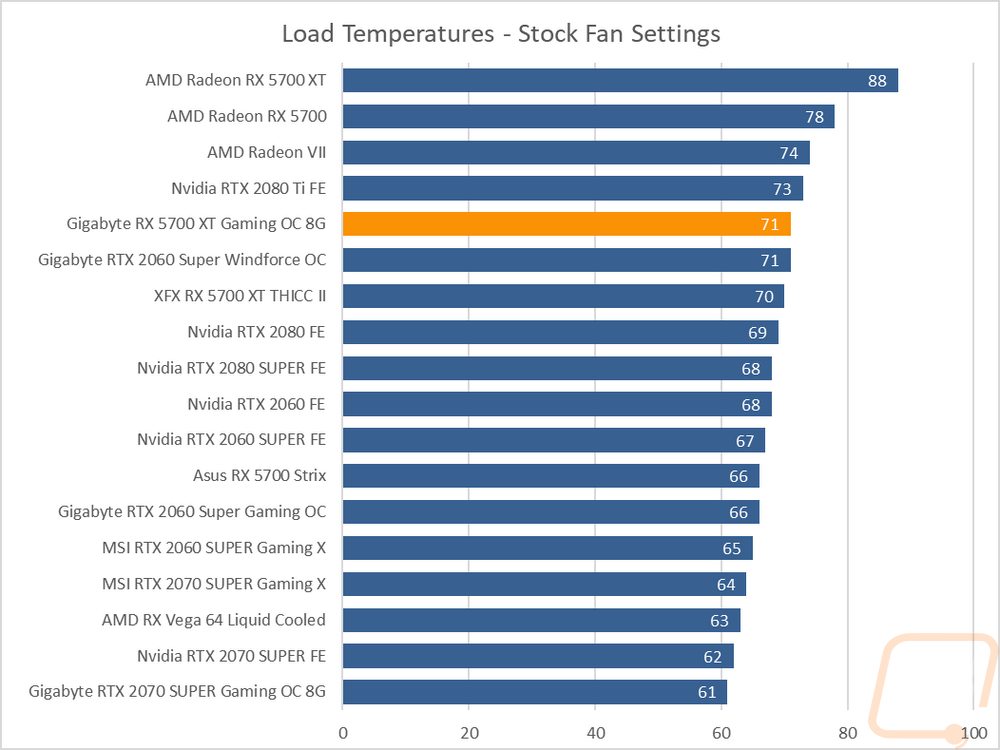 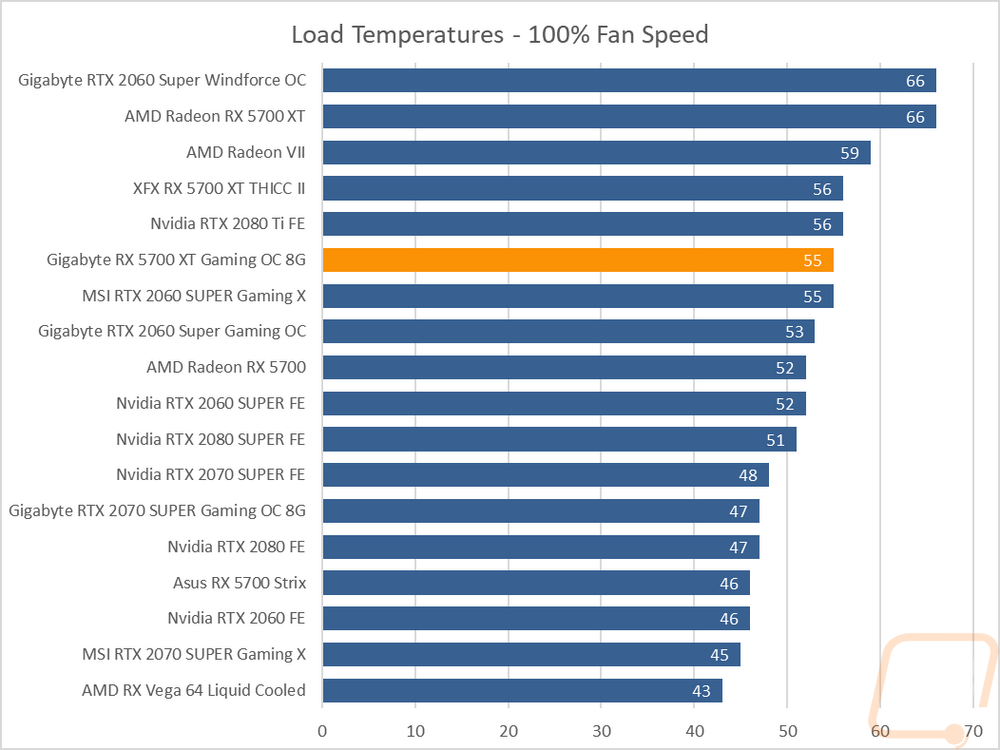 While doing stock fan profile tests on the RX 5700 XT Gaming OC I did get out the thermal camera as well just to peak at the card. There are limitations to what thermal cameras can show and different surface finishes will also skew things. But I just wanted to look for any obvious hotspots. On the back of the board you can see that just above the GPU location there is a much warmer area and the PCB behind it is even warmer confirming the normal that backplates are often not really for cooling. The top edge view shows where the warmed air is coming out and that the heatsink has relatively even distribution of heat which is important for the best possible cooling. The fan side, on the other hand, does show that the far fan area does seem to be running cooler. There is also a small heat pocket up under the card like with all axial fan designs where the hot air blows out into that cramped space, but it isn’t as hot as even the chipset on our X570 platform. 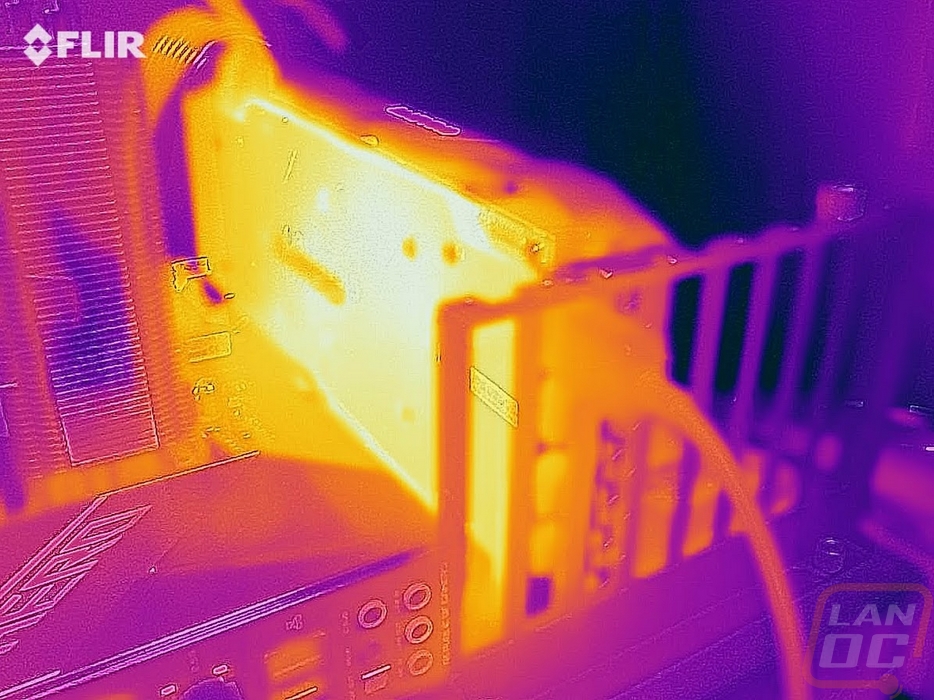 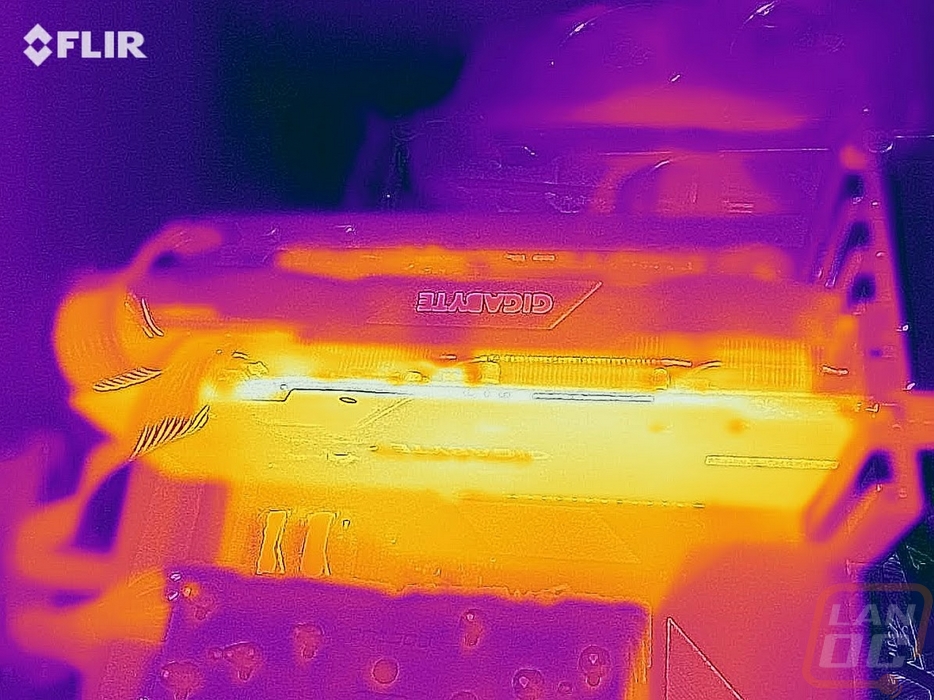 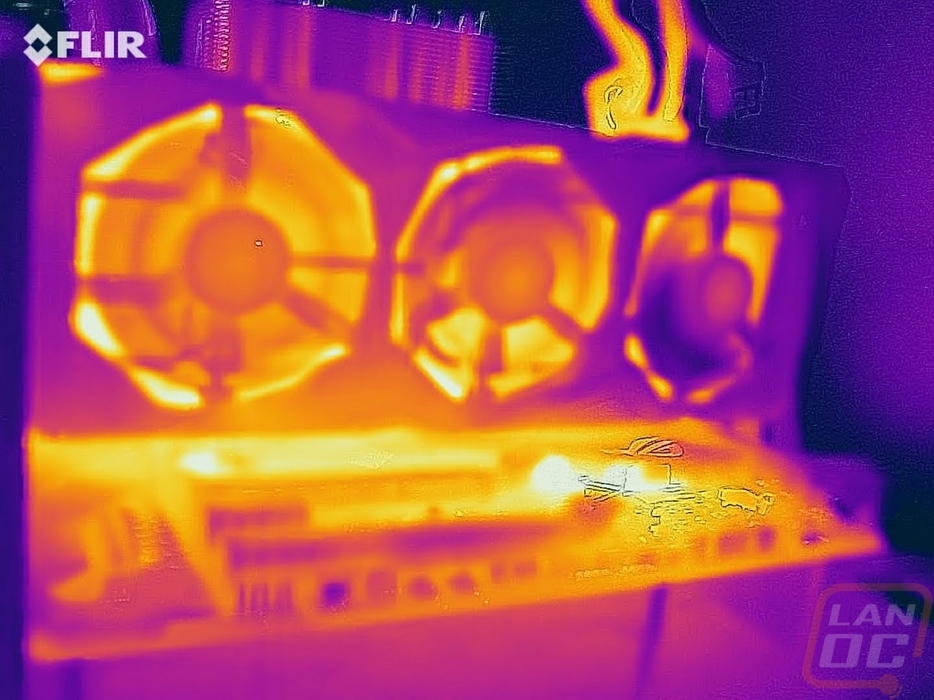 We have 1133 guests and no members online