MSI kept a lot of the Gaming X the same as far as styling and aesthetics go and that is a good thing. The design works well with its color-neutral theme, simple and clean design, and lighting that isn’t over the top but isn’t as simple as a backlit logo and that is it. Comparing the card with the two other 2070 SUPERs I’ve had in the office and the Gaming X is a much better looking card than the Gaming OC and unlike the Founders Edition you can use a color other than green. Now the silver Founders Editon is still ahead in overall quality, with its thick metal fan shroud and backplate but the Gaming X is close behind with a thick backplate as well. MSI also slipped in that free GPU anti-sag bracket which is a really nice bonus!

Now the Gaming X’s design is large, really large. It is bigger in every way compared to the Founders Edition and its height could be an issue in some builds. I would have also liked to see MSI bump up the clock speed just slightly, there isn’t any reason for this card to pull the wattage it does and not at least match the clock speed of the Gaming OC from Gigabyte. Performance wise it did trade blows with the Gaming OC a lot, and I wouldn’t use that 15 MHz difference to pick which card I went with but it would have been nice to have. All in all, like all of the 2070 SUPERs, the Gaming X performed really well. Especially at high refresh rate 1080p and at 1440p where you can play anything at the highest settings comfortably.

At the end of the day, pricing is going to determine if the RTX 2070 SUPER Gaming X is the card to aim for or not. All of the tools are there as far as styling and performance. But if the price is wrong, none of it matters. As of writing this MSI wasn’t able to give a locked-in price but did say that they are expecting it to be $549.99. For comparison the Gigabyte RTX 2070 SUPER Gaming OC that I also took a look at is at the same price and the Founders Edition is $500. That extra money does get you a few FPS of performance over the Founders Edition, improved cooling and a lot better noise performance. Between the Gaming OC and the Gaming X I think the Gaming X wins out slightly due to the anti-sag bracket and better aesthetics. Overall at that price point this seems to hit the sweet spot for performance without overpaying and if I was on the market for a solid 1440p card I would put it at the top of my list. 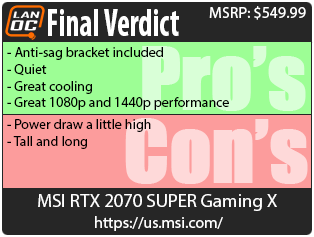 You might call him obsessed or just a hardcore geek. Wes's obsession with gaming hardware and gadgets isn't anything new, he could be found taking things apart even as a child. When not poking around in PC's he can be found playing League of Legends, Awesomenauts, or Civilization 5 or watching a wide variety of TV shows and Movies. A car guy at heart, the same things that draw him into tweaking cars apply when building good looking fast computers. If you are interested in writing for Wes here at LanOC you can reach out to him directly using our contact form.
Discuss this article
Log in to comment
Posts in discussion: MSI RTX 2070 SUPER Gaming X

We have 1558 guests and no members online