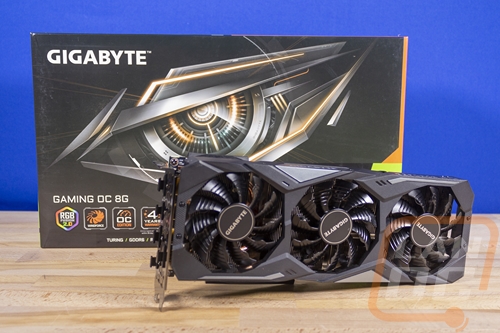 Gigabyte has stuck with the same styling across all of their Gigabyte branded cards. This includes a black fan shroud made of plastic with a few different angular designs molded into the shroud. This is a traditional three fan Windforce card as well so its overall size is long like other Gigabyte triple fan cards but you will notice it isn’t overly tall like a lot of other manufacturers do with their cards. The triple-fan design allows them to stick close to the normal PCI card height. The shroud does have some silver accents. The one under the first fan on the left is painted on as is the one above the far right fan. The top and bottom triangle shaped accents are stuck on. 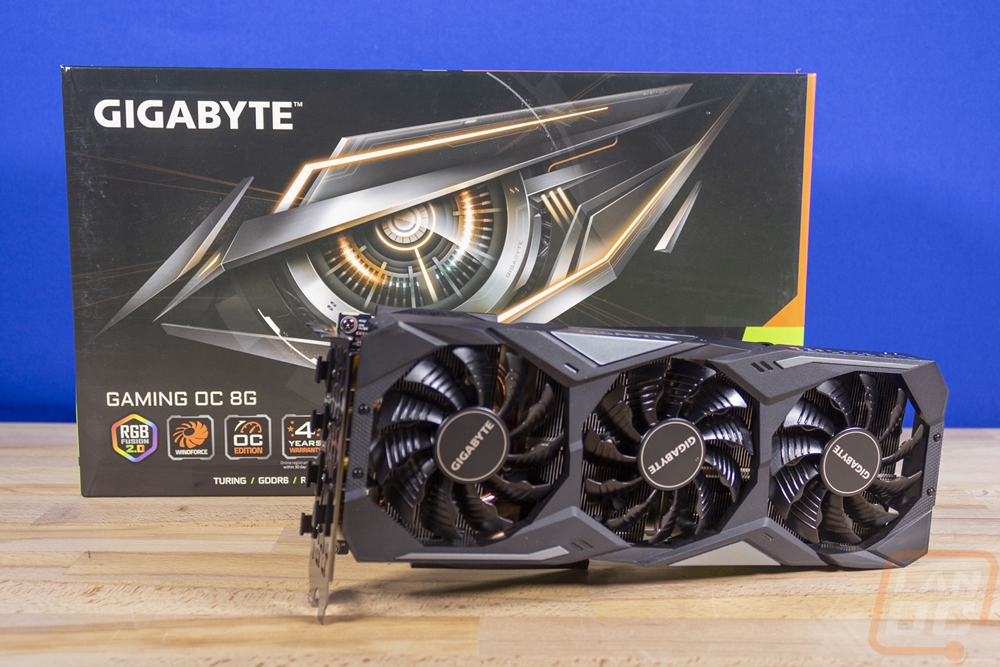 If you haven’t seen a Windforce card before there is one big feature that might not even be obvious until it is pointed out. Of the three fans, they don’t all have the same fan design. In fact, they don’t even all spin the same direction. The idea is to spin the middle fan in a direction that matches the direction of the closes edge of the other two fans. So if you look between the first and second fans the blades point up in that area. In between the second and third fans, they both point down. This allows the fans to be close together without a lot of turbulence. It also works well with the cooler design behind it. Most of the air blows down into the heatsink, but with vertical heatsink fin layout, the air in between the fans blows down or up across the heatsink as well.

Of course with axial fans the air has to go someplace and to account for that Gigabyte’s fan shroud doesn’t go all the way to the PCB. It covers about half of the heatsink but allows room for air to vent out the top and bottom of the card. Having just looked at the triple fan RTX 2060 SUPER as well, I should also point out that the heatsink on the RTX 2070 SUPER Gaming OC is noticeably thicker and dense. Gigabyte also did a great job of filling in gaps like around the fan and RGB power connection up on the top edge, the heatsink doesn’t float over the PCB, it cuts around the connection and holds tight to the PCB. This is combined with 8 heatpipes which direct contact the GPU to pull the heat out across the heatsink. This is very important with the long card design especially to get the heat out to the far ends of the card.

Up on the top edge, the RTX 2070 SUPER Gaming OC has two power connections, an 8-pin and a 6-pin which matches the Founders Edition as well. Gigabyte did flip them around and notch the PCB for the clips to allow the heatsink to stay tight up against the connections. The one silver accent that wraps around to the top of the card also has the Gigabyte logo in it. This is the only RGB location on the card and I’ve talked a lot about this in the past but I would prefer a few RGB accents over a backlit logo anytime. I don’t really like turning my PC into a big advertisement. I also think the Gaming OC would benefit from a touch more lighting, which is crazy given the over the top RGB market we are in. But it's like they put just enough to say that it is RGB. That said, this is still a step beyond the Founders Edition which still locks you into the Nvidia green for lighting. 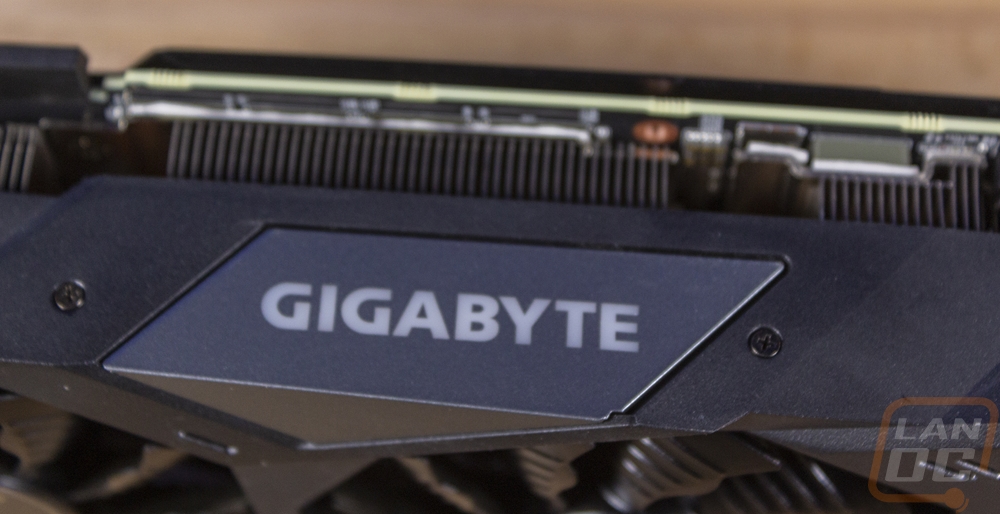 For display connection options the RTX 2070 SUPER Gaming OC doesn’t skimp on any. It has a full three DisplayPort connections, with one up on the top row. Then in between the DisplayPorts, there is a single HDMI. Then on the bottom row on the far right, it also has a USB Type-C which is a VirtualLink connection for future VR headset direct connections. It can function as a normal type-C currently, but it also can handle USB, Display, and power altogether for a VR headset eliminating the need for all of those different connections and an adapter box. For ventilation, the Gaming OC does have holes cut in the PCI bracket, but the cooler design also isn’t pushing much air this direction as well.

The Gaming OC also has a full-length backplate which is a nice touch. It is a sheet metal backplate but it isn’t as thin as some of the other sheet metal designs. It also comes finished with a textured but semi-gloss finish. In the middle, it has the Gigabyte logo painted in white. Overall I would prefer one of the nicer aluminum backplates but this is a solid design that should help with GPU sag for the long card and protect the PCB from damage as well. Most importantly this is better looking then no backplate at all in the most visible part of the card when it is installed in a normal case. Looking from the back you can see how the heatsink and fan shroud does extend a little past the PCB and backplate. I’ve seen cards with huge extensions that are really ugly and normally not needed. But you can see that the triple fan design required the extra length and gigabyte was careful to not waste to much space at the end. You do get a peek at the copper heatpipes and this is an area where the airflow for the fan should be really easy. Also down at the end Gigabyte slipped the model and serial number tag up under the power connections to be easily found. 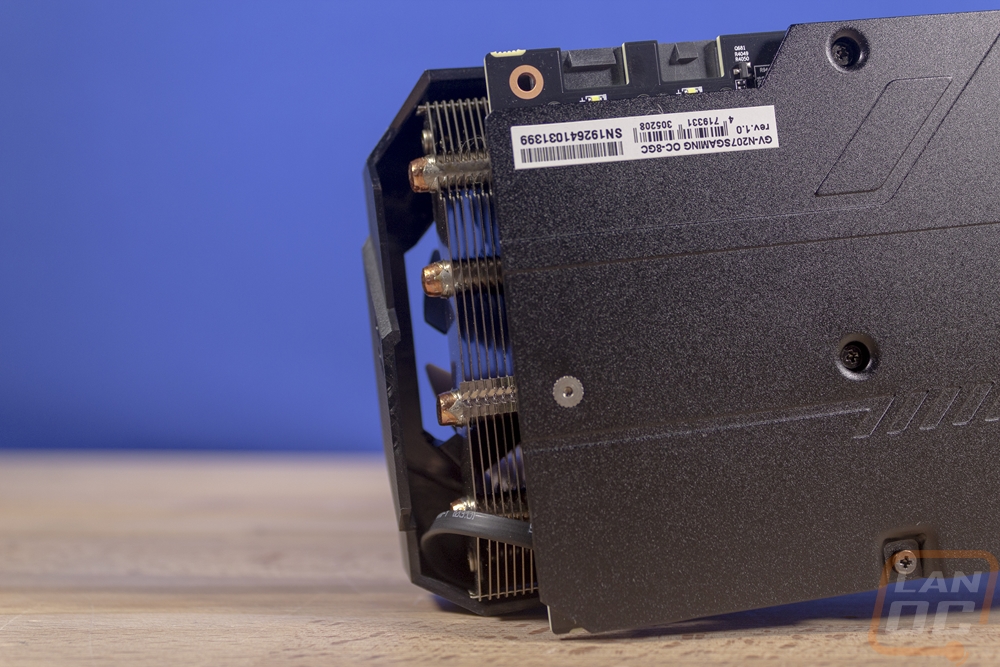 Here is a look at the RGB backlit Gigabyte logo up on top of the card. Like I said, it isn’t all that flashy or in your face. By default, it rotates through all of its colors, but with the software you can set it to any color you prefer.

We have 787 guests and one member online