With testing done, having taken a look at the features of both the Gigabyte RTX 2060 SUPER Gaming OC and Gigabyte RTX 2060 SUPER Windforce OC I can now settle down and run through what was good and bad on both cards and figure out where they fit in the market. Starting with the Gaming OC I was extremely impressed with the clock speed that Gigabyte ended up going with. 1815 MHz when the stock clock on the Founders Edition was 1650 MHz is a big factory overclock and this isn’t even the fastest card that Gigabyte has to offer. The launch cards from other companies aren’t coming close as well. Gigabyte stuck with their traditional Windforce triple fan design which means the Gaming OC ends up being nice and short but long. Depending on your case this could be a great thing or a bad thing but I do love that they aren’t going extremely tall like most cards.

The color-neutral design is nice though the shroud overall is a little bleh and I don’t care at all for the RGB lighting just being the logo up on top. If you are going to push having RGB lighting on the card it should have a few accents and it shouldn’t be a glowing advertisement in my case. You do get a metal backplate which is nice, but it is a thin sheet metal backplate so it kind of falls in the good and bad categories. MSI and the Founders Edition both had more solid backplates that I think will help with GPU sag in the future which given the length of the Gaming OC is a real concern.

The biggest issue with the Gaming OC was with its cooling, especially on the VRMs. The fan profile needed for the huge overclock ended up being loud under load even though the fans were quiet at 50% and 100% fan speeds compared to everything else. The VRMs look to be running extremely hot and that translated to performance drop off when I tested longer benchmarks like Blender. I didn’t run into this issue on the other 2060 SUPERs at all. Better cooling would help keep those boost clocks up there. The other issues with the Gaming OC and related to the VRM temperature issues was the overall power draw, this card pulled a lot more power than the other 2060 SUPERS. In fact, it was right up there with the 2070 SUPER which is a little crazy.

As for the Windforce OC, it had its up and downs as well. It has the same color neutral design as the Gaming OC which I like the color scheme but don’t know that I like the styling overall. Gaming performance at 1080p and 1440p, like all of the 2060 SUPERs was great. It also doesn’t go crazy with card height but it is taller than the Gaming OC and uses larger fans.

Gigabyte did some weird things with the cooling design on this one though. For example, the fans are off-center to the heatsink with a large heatsink area that isn’t directly cooled and then one fan hanging off past the end of the heatsink. That also led to a full inch of space beyond the fan as well and added 1 ½ inch in total length to the card for no obvious reason. Then on top of that they went with a horizontal heatsink fin orientation but then blocked off the end of the card where a lot of that airflow would go and opened up the bottom as the main place for airflow to go which just gets pulled back in to the fans or creates a hot spot under the card and against the motherboard. Those two things lead to cooler performance that was worse than the Founders Edition and in a few tests those thermals put the FE card ahead as well. The plastic backplate isn’t helping thermals as well, but I would still consider having ANY backplate at all a pro over cards that don’t have one. If nothing else but because it will look good installed in a normal case orientation.

So as you can tell, both cards had their pro’s and con’s. Neither stands out as a perfect solution so it leaves me with a lot to sort through. So the Windforce OC is basically a price point card, designed to make sure Gigabyte has a card at the $400 MSRP of the RTX 2060 SUPER which is a good thing. Remember all of those launches where there didn’t end up being any cards at the MSRP. The problem with the Windforce OC is that Nvidia has the Founders Edition at the same price. The Windforce OC would be a good option for a cheap RTX 2060 SUPER, but when it has to compete with the all-metal construction of the FE card the only thing it can do to stand out is have improved cooling and a big overclock and while it does have a slight overclock the cooling performance was poor and I just don’t think I would go for it over the FE if picking between the two.

The Gaming OC, on the other hand, comes in with an MSRP of $420 which isn’t much more than the Founders Edition but it has a huge overclock. The cooler performance is improved over the Windforce but it still has issues. The main issue with the Gaming OC is just that the overclock is so significant that its VRMs run extremely hot. The hot VRMs lead to performance drop in some situations like long stable loads like Blender. The overclock also has this card pulling a huge amount of power. This is a card I would pick over the Founders Edition. As for picking it over other aftermarket cards? Well, it depends. If you want raw performance this card is going to be fast. It lacks a little in aesthetics and the power/VRM issues are still a concern for long term use. The AORUS card is the model that seems to fix all of those issues and has an even higher clock speed, but I haven’t had the chance to test it out.

Both cards still come with the Wolfenstein: Youngblood and Control combo that Nvidia has been providing with their RTX cards which help a lot with the overall value of the RTX 2060 SUPER. The RX 5700 based aftermarket cards still haven’t come out as well so in this price point this is still a good option. 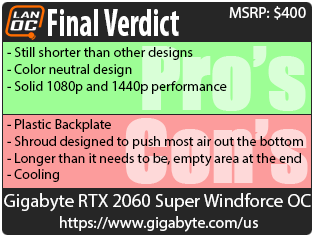 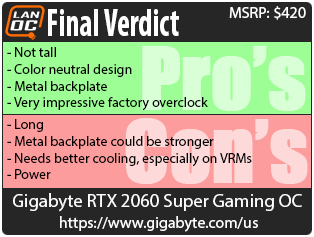 You might call him obsessed or just a hardcore geek. Wes's obsession with gaming hardware and gadgets isn't anything new, he could be found taking things apart even as a child. When not poking around in PC's he can be found playing League of Legends, Awesomenauts, or Civilization 5 or watching a wide variety of TV shows and Movies. A car guy at heart, the same things that draw him into tweaking cars apply when building good looking fast computers. If you are interested in writing for Wes here at LanOC you can reach out to him directly using our contact form.
Discuss this article
Log in to comment
Posts in discussion: Gigabyte RTX 2060 SUPER Gaming OC and Windforce OC

We have 718 guests and one member online