Starting with the larger Gigabyte RTX 2060 Super Gaming OC first you can see with this card they went with the longer three fan Windforce cooler design. This is one of the cooler designs that I like a lot because unlike everyone else Gigabyte doesn’t try to go taller to wedge in larger fans. They stay really close to the standard PCI height and go longer to fit the cooling power in. Of course, if your build doesn’t support a longer card this can be an issue and frankly it puts them at a disadvantage when it comes to noise because larger fans can run at lower RPMs and get the same airflow. Gigabyte helps compensate this with their fan configuration. If you look close you can see that the two outer fans are the same and the middle has its blades bending the other direction. They use this design so that the air at the end of the fans goes the same direction as the fan next to it. So between the left fan and the middle fan the air goes up, and between the middle fan and the right fan the air goes down. This means less turbulence which means less noise and better airflow. All three fans are axial in design, blowing down into the heatsink which is visible with its vertical fin layout. The fan shroud that Gigabyte went with is all plastic and not exactly spectacular in any way. It has a lot of angular shapes molded in with a few grey accents on the black for that color neutral design. 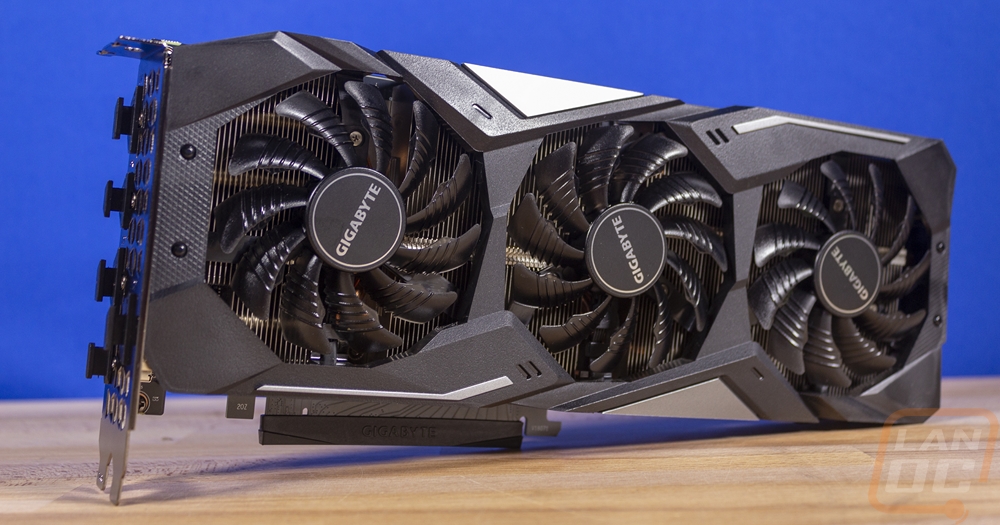 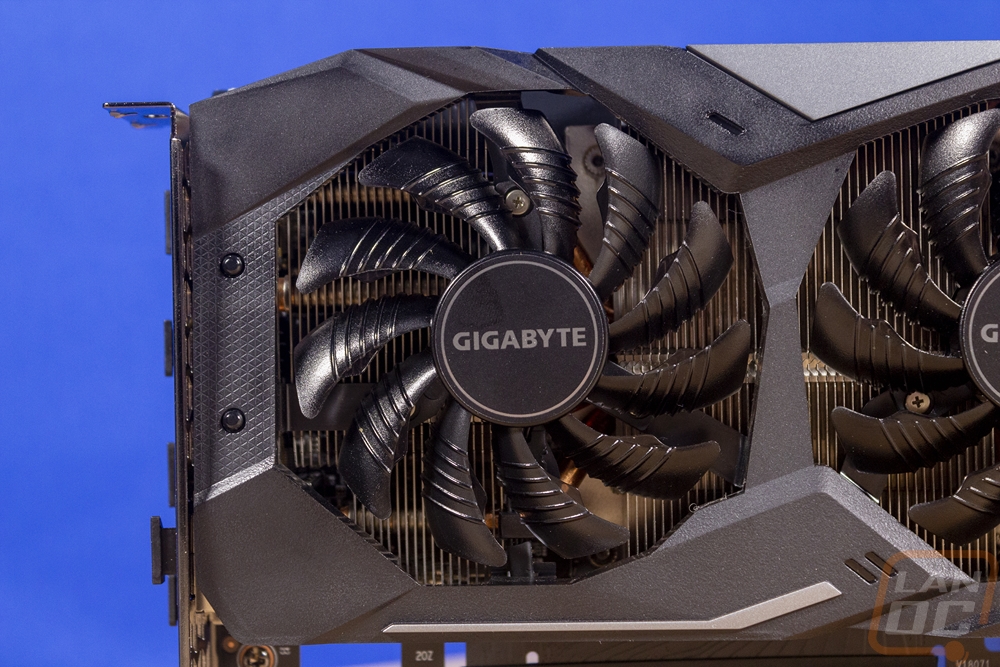 Up on the top edge of the card, the grey section wraps around and this is where Gigabyte put their RGB. As much as I hate cards having too much lighting, I think a little more than just the logo up on top would be nice. Not to mention how much I hate backlit brand logos in general. If this lit up as 2060 Super or something like that I would like it a lot more. I just don’t like my PC looking like a big billboard, showing off the model of the card isn’t bad or even just simple RGB accents on the top edge without any words at all would be nice. They do have the GeForce RTX branding also up on top raised on shroud with a gloss finish over the textured base. Also up on the top edge Gigabyte has the power connections. They went with an 8-pin and a 6-pin for the Gaming OC. This is more than the Founders Edition or most other 2060 Supers have, all of the other 2060 Supers I have taken a look at including the Windforce OC have just a single 8-pin power. So with the big overclock on this card Gigabyte must need a little more power. 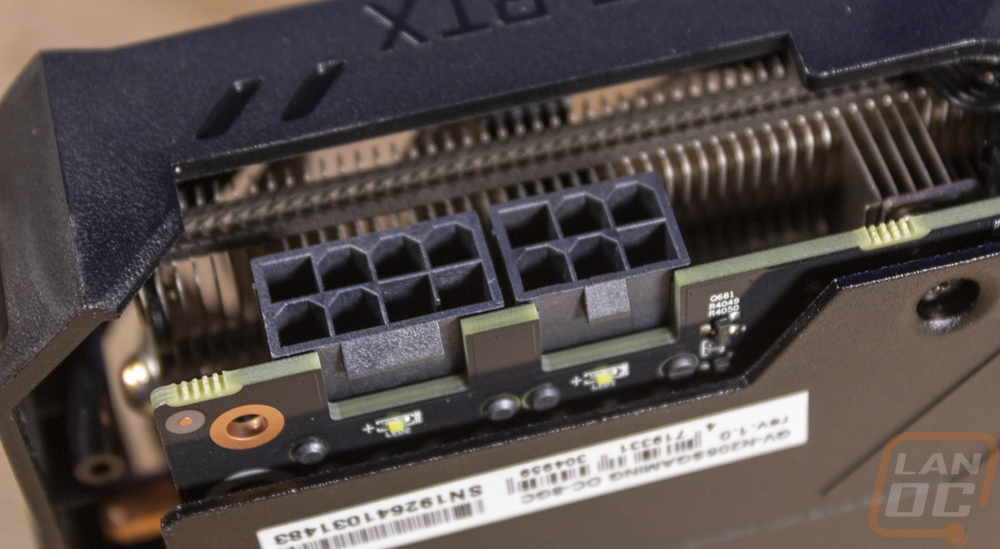 Now with the cooler design being an axial design, it does mean that the fan shroud does have to leave a little room for airflow around the PCB. I like that Gigabyte didn’t just go with a shroud that basically is open complexly around the edges. This shroud covers about half of the edge with just enough room at the bottom for airflow. The end of the card is thicker which makes sense with their heatsink being vertical, so air will mostly be going out the top and bottom of the card.

For the back of the card, Gigabyte did go with a metal backplate for the Gaming OC. This is a sheet metal design so it isn’t nearly as thick and strong as the Founders Edition design or even the thicker design that MSI went with on the Gaming X. But it is an upgrade over a plastic backplate or no backplate at all. It protects the back of the PCB from damage and offers at least some support for the long card to hopefully prevent sagging, but I don’t think it is going to be enough in the long run. It has a textured finish that has a gloss to it as well which is a little weird. There are a few accents stamped into the design and in the middle, it has the Gigabyte logo in white. Overall even if it isn’t as strong as I might like, it is the second most visible area of the card when installed in a normal case and I like this a lot more than no cover at all. The back view also lets us see how the fan shroud does extend a little past the PCB to cover up the heatpipes coming out the end of the heatsink. I do wish however that the backplate extended out to match it. I also wonder if having this covered might better help direct air over the heatsink. 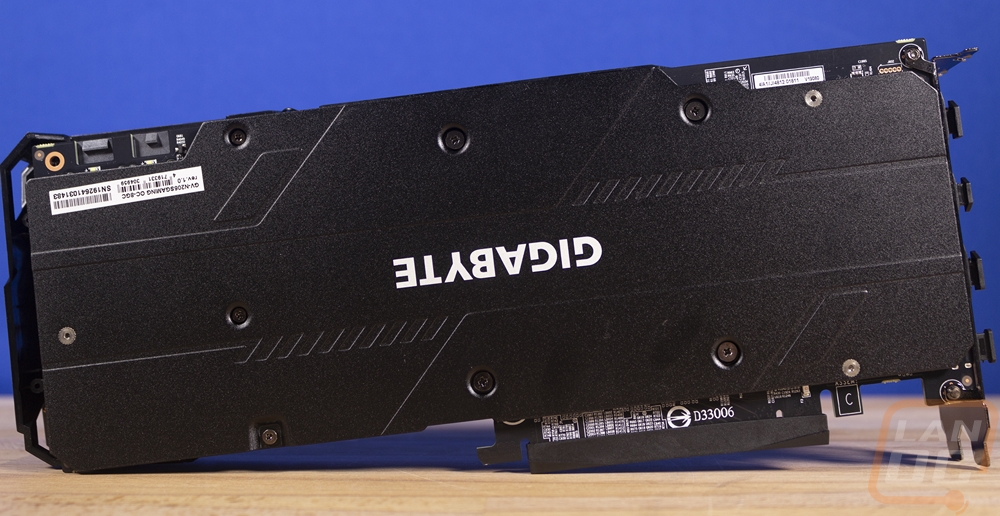 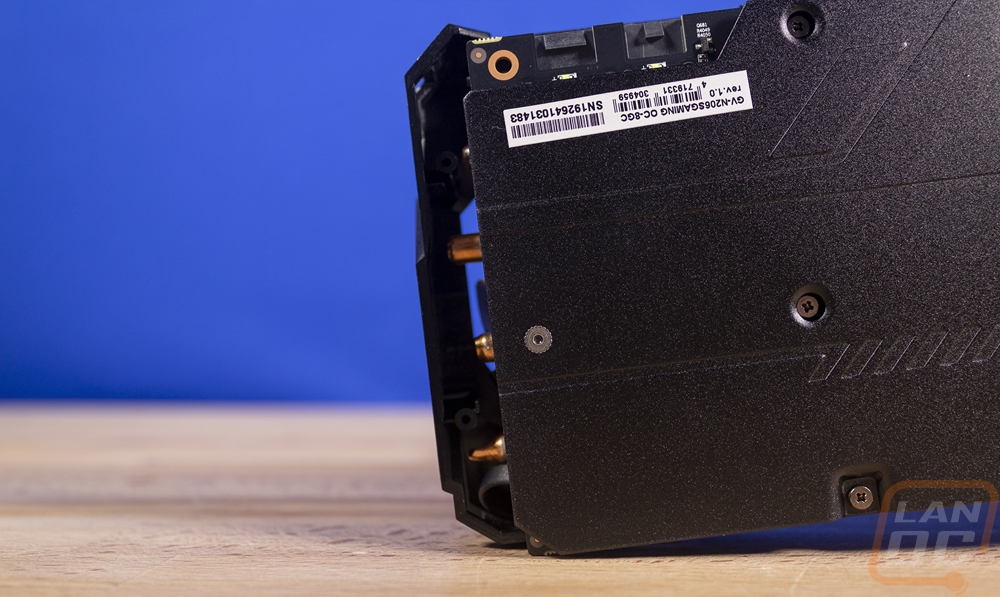 For display connections, you get three DisplayPort connections, one HDMI, and the small one in the bottom right corner is a Type-C VirtualLink connection. Gigabyte included the VirtualLink port where MSI didn’t on the Gaming X but they did still drop DVI. VirtualLink is a future looking plug but it can function right now as a normal Type-C connection. The idea is in the future you can plug your VR headset right in, not into a box with multiple connections to your PC. This will handle the power, display, and USB connections altogether.

So here is a look at the RGB lighting. Like I said before its just the Gigabyte logo that is lit up, nothing else. You do have control over the color options with their software so you will be able to match whatever colors you are doing in your build. 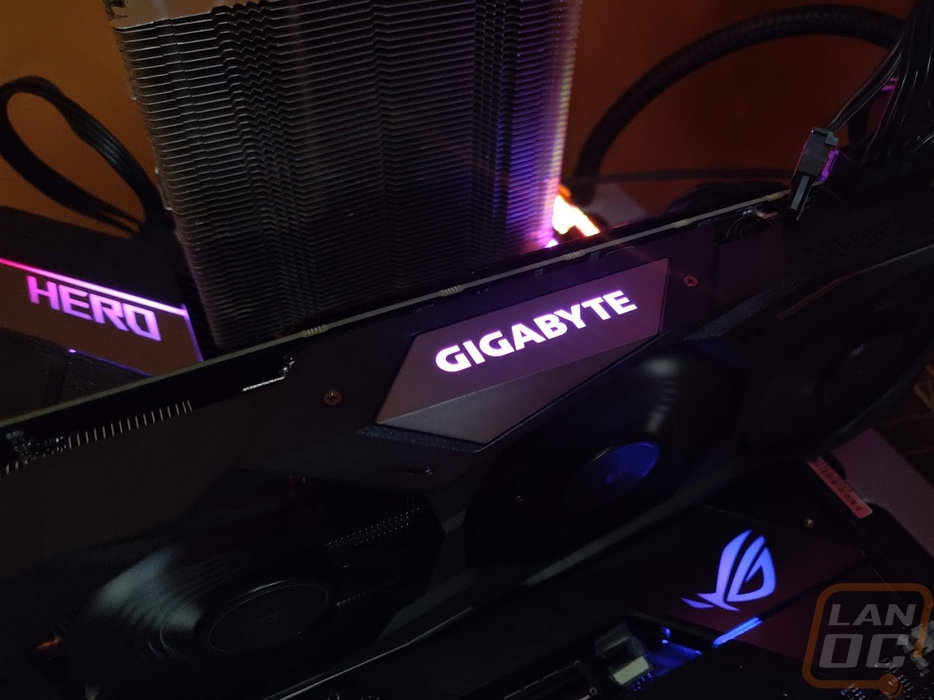 As for the second card that Gigabyte sent over, the Windforce OC. You can see right away that this is a slightly lower-end model with the dual fan design compared to the triple-fan design of the Gaming OC. It shares a lot of the same styling, namely the textured black plastic fan shroud and the silver/grey accents. This dual-fan design has more shroud visible. Gigabyte went with larger fans here and because of that, the card is taller than the Gaming OC. They still didn’t go as crazy as other companies but it is weird that the fans extend up past the top of the heatsink as you can see when looking through the fans. The fans do have the same Windforce design which has them spinning in two different directions for better airflow. But the heatsink design on the Windforce OC has the heatsink fins running horizontally not vertical which is weird to me because vertical would complement how the air blows where the two fans meet. 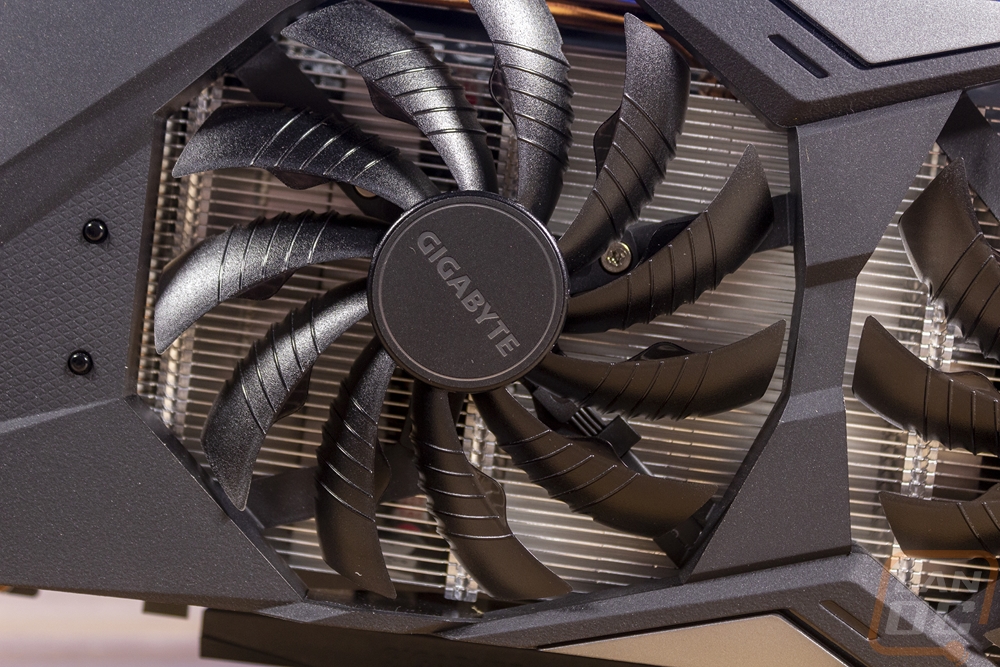 Up on the top edge they still have the Gigabyte logo with silver paint on the raised letters and then a recessed GeForce RTX logo. The power connection is up top which is a nice change from the Founders Edition card which had the power in the end. The Windforce OC has the same 8-pin that the Founders Edition and the Gaming X both had.

The shroud design around the outer edges had me scratching my head a little. The top edge does have a lot smaller of a gap than even the Gaming OC had but enough of a gap to see the heatpipes. The heatsink design matches this, it has a horizontal fin design which is similar to a blower card, but still uses axial fans. So the air should be going out towards the ends of the card so less room on the top makes sense. The bottom, on the other hand, is almost completely open. Then at the end of the card where most of the air should be going, it is completely closed off. So it looks like Gigabyte is hoping most of the airflow from the two fans goes out the bottom of the card near the ends, blowing it out against your motherboard.

For the backplate on the Windforce OC Gigabyte saved a little money by going with a plastic backplate. It still has the Gigabyte logo in the center and a few accents. Being plastic it isn’t going to offer as much strength when it comes to sagging but it does still keep the PCB protected from damage and helps the second most visible part of the card look good. Plastic also means they can get a little crazier with shapes which is noticeable with how the end of the card wraps around completely. One of my complaints on the Gaming OC was the end of the shroud extending past the PCB and this design does that as well but it isn’t visible. In fact, it extends a full inch past the end of the fan for no reason at all, not to mention the fans are father to the right than they need to be. This card could be an inch and a half shorter without giving up anything. 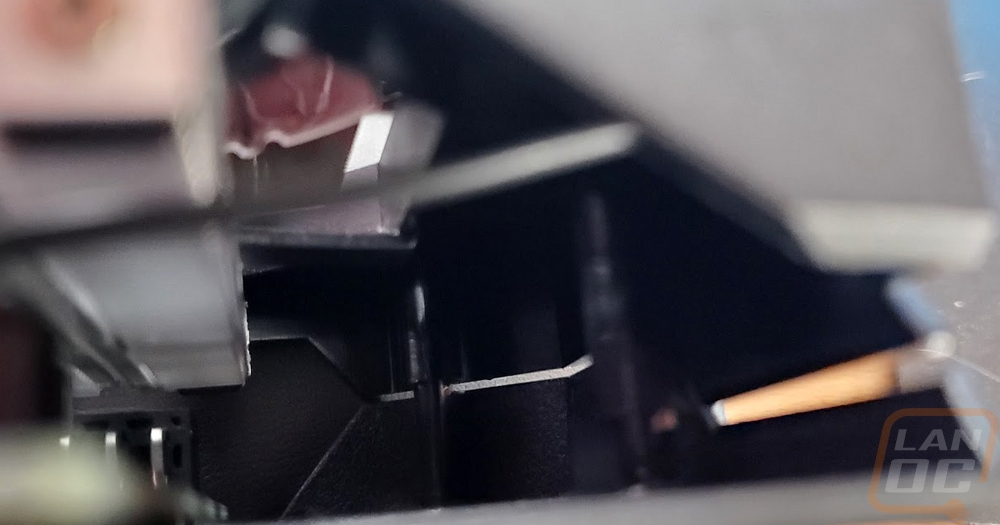 For display connections, the Windforce OC doesn’t have the VirtualLink that the Gaming OC had. Without that, they were able to drop all of the connections back down to the bottom edge. You get three DisplayPorts and one HDMI. Still no DVI but there is more room for airflow on the bracket which with the heatsink design might be helpful.

With the two cards together you can kind of get a better idea of their sizes. The Gaming OC is noticeably longer, even with the Windforce OC being longer than it needs to be. The Windforce OC, on the other hand, has significantly larger fans and is a taller card in general. Next, to each other, you can see how the shroud designs still share a lot of the same styling with the Gaming OC having a few extra silver accents. 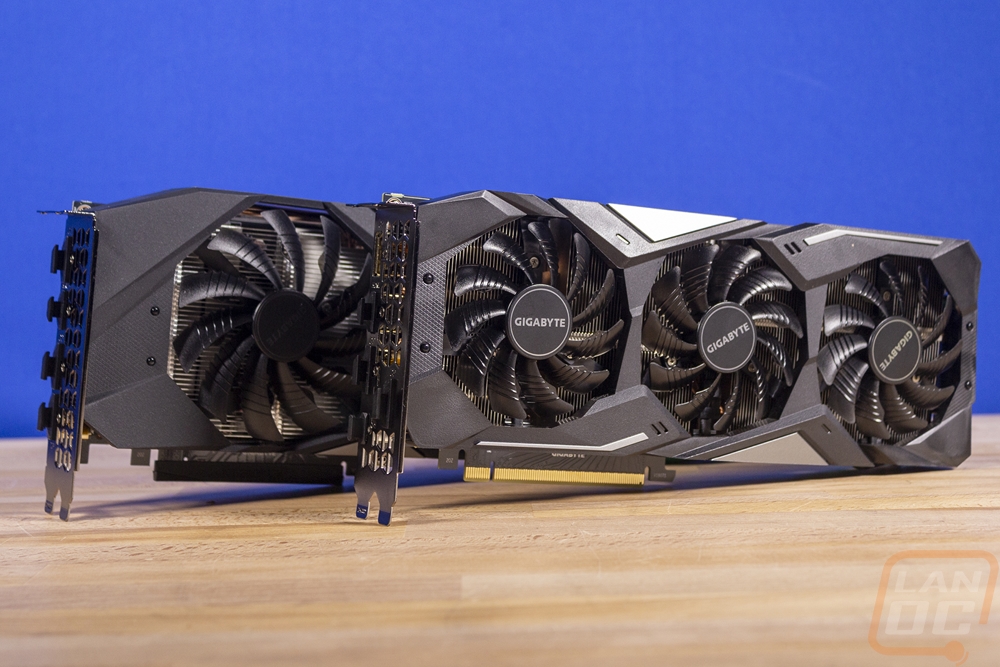 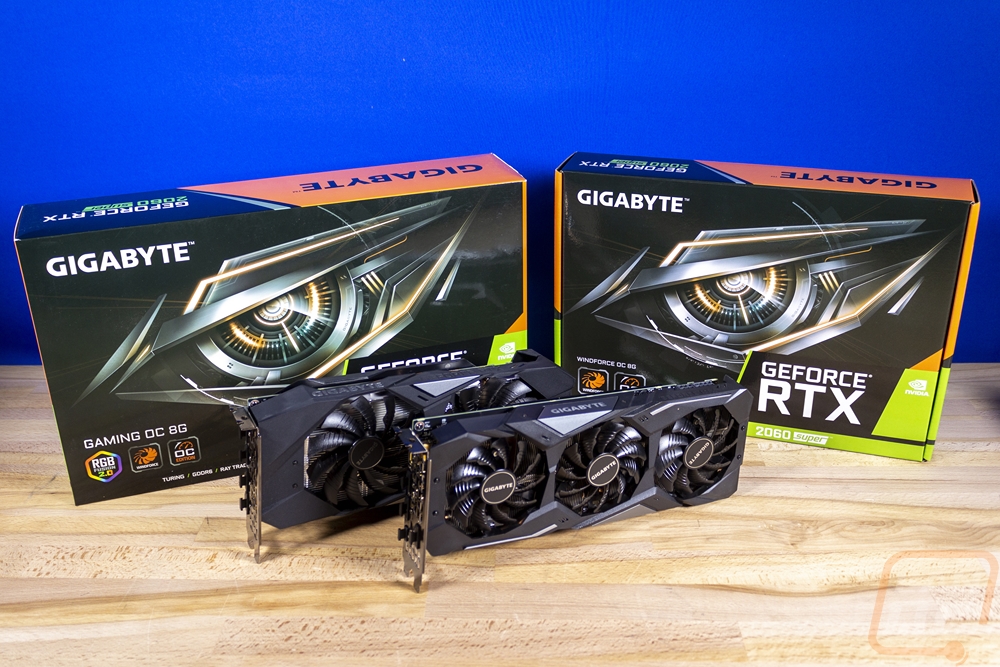 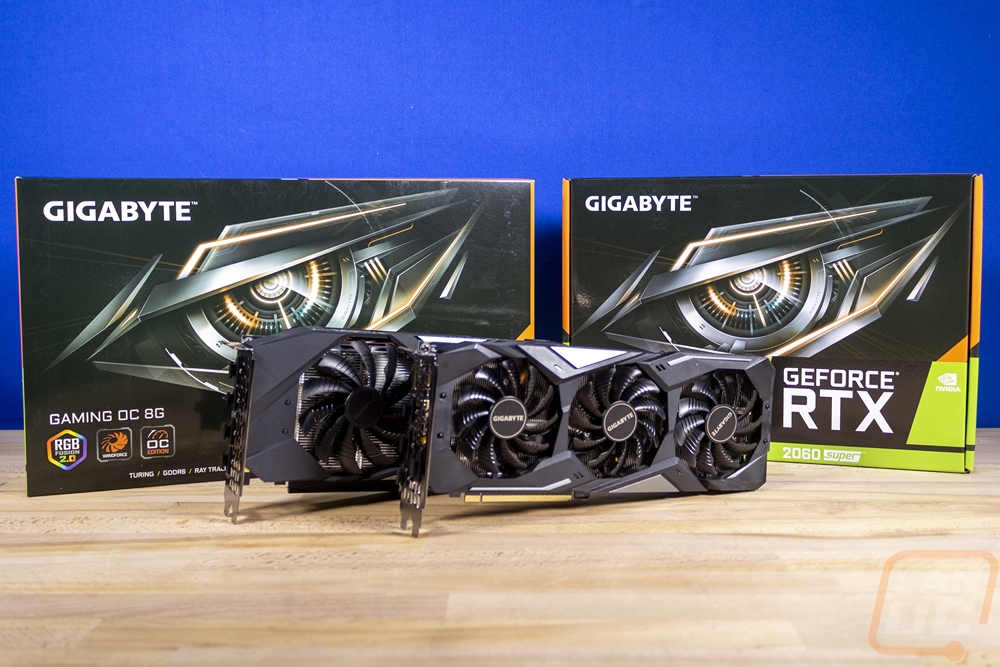 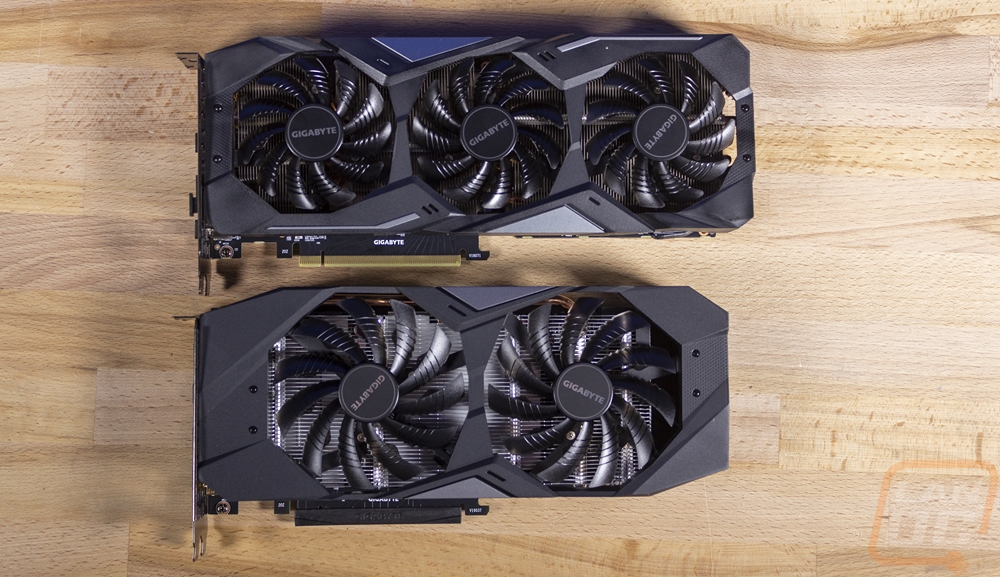