The RTX 2060 was and still is a solid card, which gets you good performance and access to the Tensor and RT Cores without breaking the bank like some of the higher end RTX cards. In fact, even with the introduction of the GTX 1660 Ti the RTX 2060 was still a compelling option when game bundles were taken into account. So I was really excited to see that Nvidia gave the RTX 2060 the SUPER treatment. What did that actually end up being? Well, this wasn’t a standard overclocked rerelease, they actually increased the core counts up very close to the RTX 2070 and went with the higher VRAM capacity and 256-bit memory interface. In reality, the RTX 2060 SUPER is a lot closer to the RTX 2070 than it is to the RTX 2060. In fact, in my testing I found that it outperformed the “reference” clocked RTX 2070 in just about every test, falling right in between that and the RTX 2070 FE which came with a little bit of an overclock.

Like the previous 2060 Founders Edition, you still get that solid all-metal design which no aftermarket card comes close to with their plastic fan shrouds. The increase in performance means what was a solid 1080p card is now a contender at 1440p as well. The cooler design only had one change which was the addition of the chrome in between the fans, I think it looks good but chrome can be very polarizing and I’m sure this will be no different. Then again the all silver design of the RTX Founders Edition cards was and is still polarizing as well, Nvidia must just be going with that. I also wish they would have taken this update as a chance to open up the lighting options on that top logo, we all get it green IS Nvidia but we want to be able to change that to whatever matches our build/style. The dual fan design is a big improvement over older blower cards when it comes to performance but they are still noisy compared to the aftermarket options.

Now for pricing Nvidia priced this card at $399, aftermarket card pricing isn’t announced yet but this like the original RTX 2060 looks like a good value to me. You are getting performance above the RTX 2070s with the stock clock speeds which were priced at $499 back in October. In addition, Nvidia has a game bundle which gets you Wolfenstein: Youngblood and Control which are both titles you can expect to use Ray tracing and DLSS. The debate on if RTX is worth it is still there of course, but game titles with support for ray tracing and DLSS are in the pipeline as E3 this year has shown. I know if I was considering the RTX 2060 before the 2060 SUPER is a MUCH better deal, especially with a lot of the original 2060 overclocked cards being at the same price. 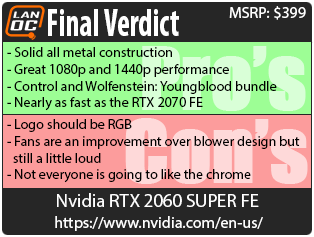 You might call him obsessed or just a hardcore geek. Wes's obsession with gaming hardware and gadgets isn't anything new, he could be found taking things apart even as a child. When not poking around in PC's he can be found playing League of Legends, Awesomenauts, or Civilization 5 or watching a wide variety of TV shows and Movies. A car guy at heart, the same things that draw him into tweaking cars apply when building good looking fast computers. If you are interested in writing for Wes here at LanOC you can reach out to him directly using our contact form.
Discuss this article
Log in to comment
Posts in discussion: Nvidia RTX 2060 SUPER Founders Edition

We have 1872 guests and one member online