So if you have had the chance to check out the original RTX 2060 Founders Edition most of the 2060 SUPER isn’t going to be a huge surprise. That isn’t to say that you won’t like it though, I personally loved the changes Nvidia made with the RTX cards. The biggest change, of course, was switching to a dual fan design and going with an axial fan cooler rather than the blower fan design that has been a staple with reference cards for basically ever. Why the big change? Well, all of the aftermarket cards have been using two or more fans for a while now and Nvidia has positioned their Founders Edition cards to be a premium experience. Physically the Founders Edition cards have been premium, but aftermarket cards have made them look bad with cooling performance for years. Now the 2060 SUPER does have one big change and you can see it right between the two fans. The area that used to be black has now been chromed and in that the RTX 2060 logo has that bright green SUPER logo with it as well. Time will tell on what people think of the chrome, I think it looks really good but like the silver that the RTX use for the rest of the card, it might only work in specific builds. RGB fans should love it though, reflecting your lighting. Love it or hate it, you can say for sure that it was a bold choice. 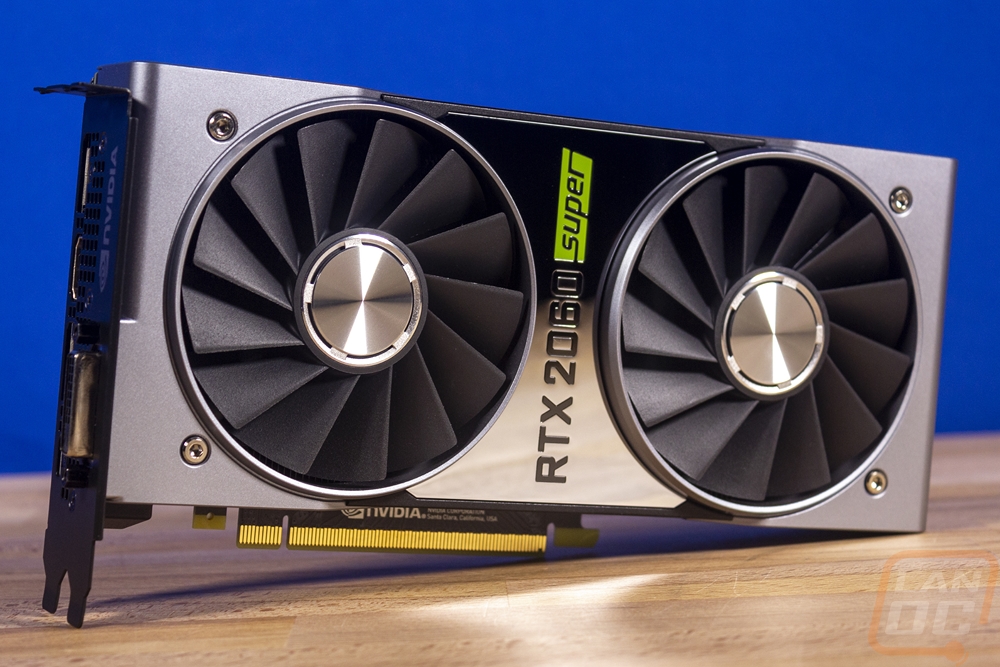 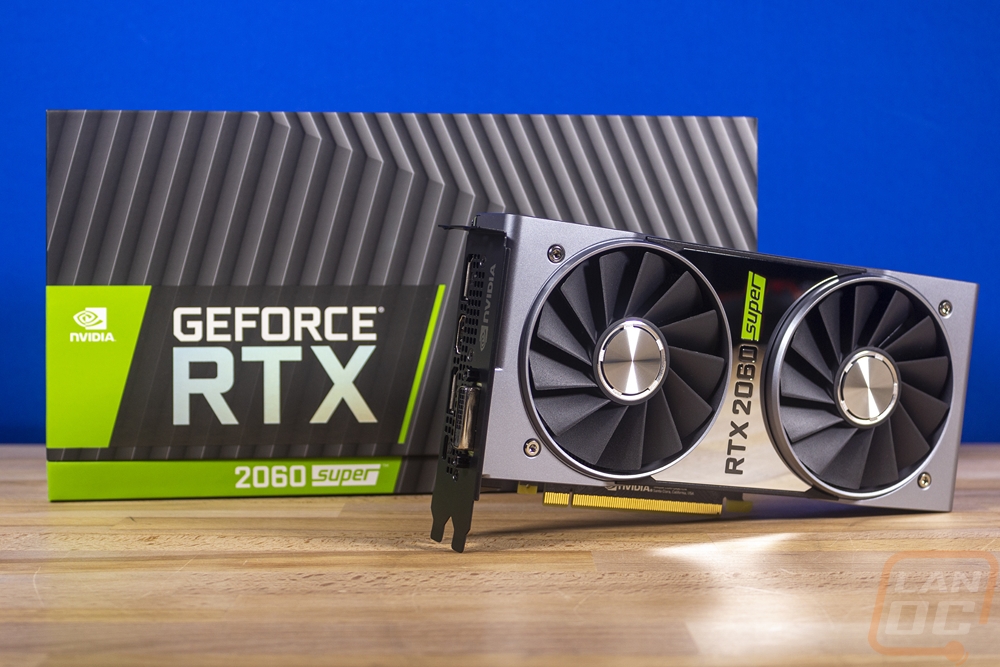 The fans themselves haven’t changed. You still have that aluminum cap on the center as well that was also used on the blower fan design and the silver ring around the fans doesn’t stand out as much now that the center is chrome. But you can see that the fan fills up the full height of the card and while the RTX cards are a touch taller than the old blower style, they still stick within the normal PCI height which most aftermarket cards don’t seem to do anymore. 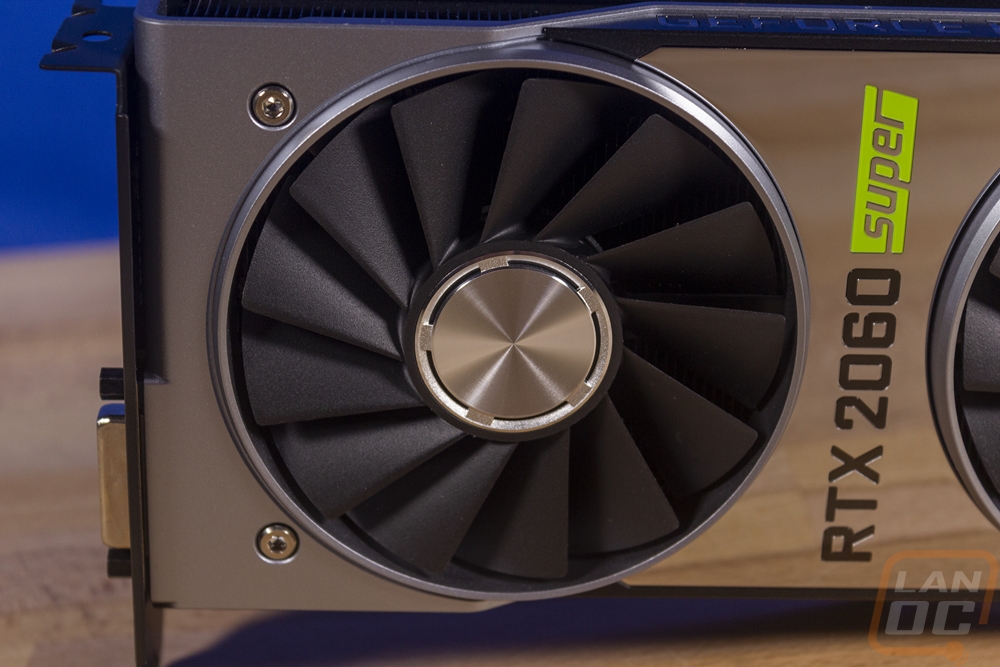 The end of the cooler is completely capped off but you can see how Nvidia has designed the top and bottom edges of the RTX 2060 SUPER to handle the airflow. Unlike the blower cards, this does mean the warmed air is blowing into your case not out the back anymore though. I also love that while the heatsink is directly visible on both views Nvidia was careful to give it a nice black finish.

While the black is no longer between the fans they did keep the black strip along the top. It still has the GeForce RTX branding which lights up. Still no updates on doing anything other than green for the lighting which is a shame. The logo used to be rubber with a transparent green over it but with the RTX cards, Nvidia went with a chromed looking transparent plastic that looks really good with the lighting off if you don’t want that green. Of course, that green SUPER logo is still going to be there though.

Like I mentioned the end of the card wraps around. The all metal casing has a nice rounded edge on the front and the back here. They did still keep the dual mounting screws for server and OEM use when you want to properly support the card to prevent dropping. The end also has the power connection, just like the original RTX 2060 and RTX 2070. For power, it uses a single 8-pin. I still prefer a normal top mounted power though. 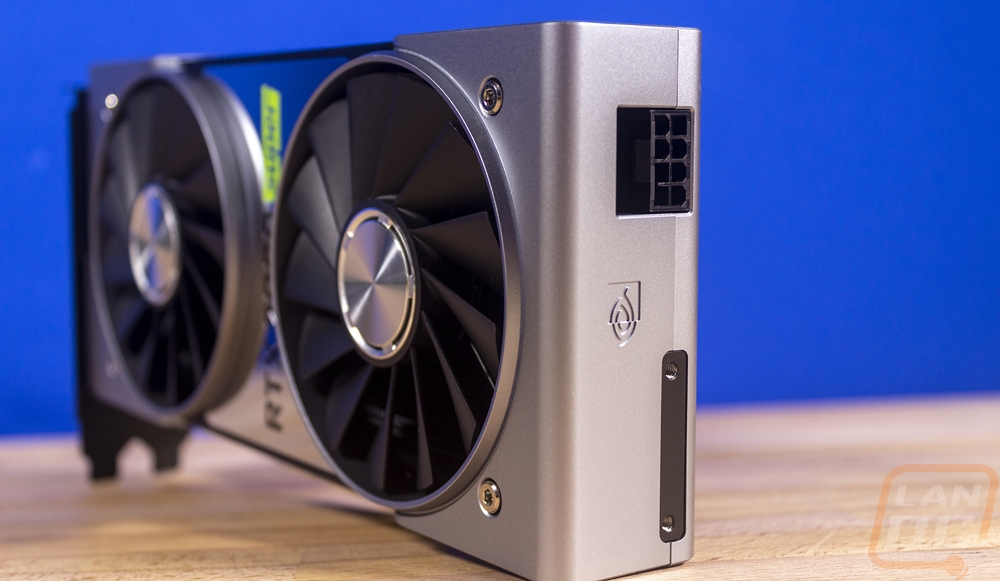 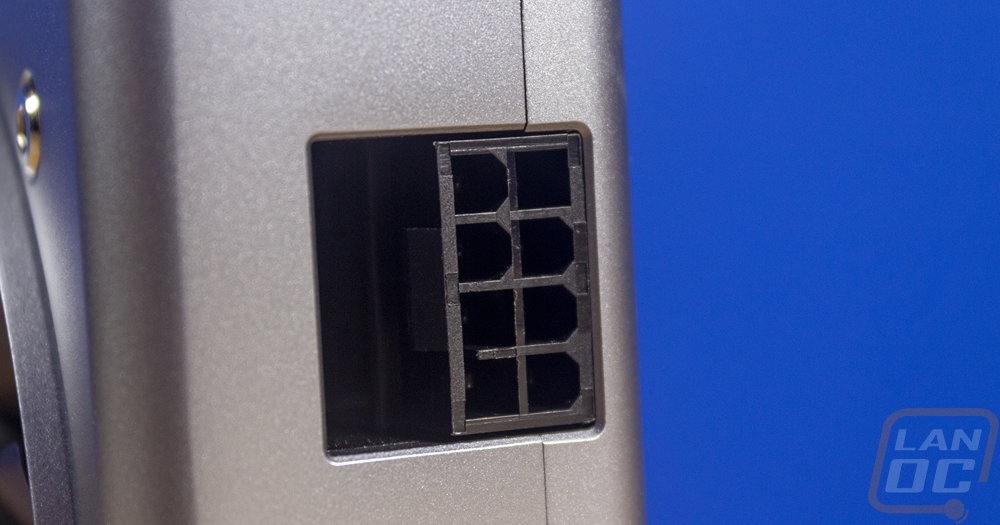 Around on back the silver backplate was a big change with the original RTX launch, in the past it was black. I like that the whole card matches now but having the backplate silver means that you will see it more. Given that most cases and builds focus on black, the silver is going to stand out more. The backplate, like the rest of the shroud, is a thick heavy duty metal. It has grooves cut into it for styling around the chrome RTX logo in the middle. Alongside of that is the bright green SUPER logo as well. 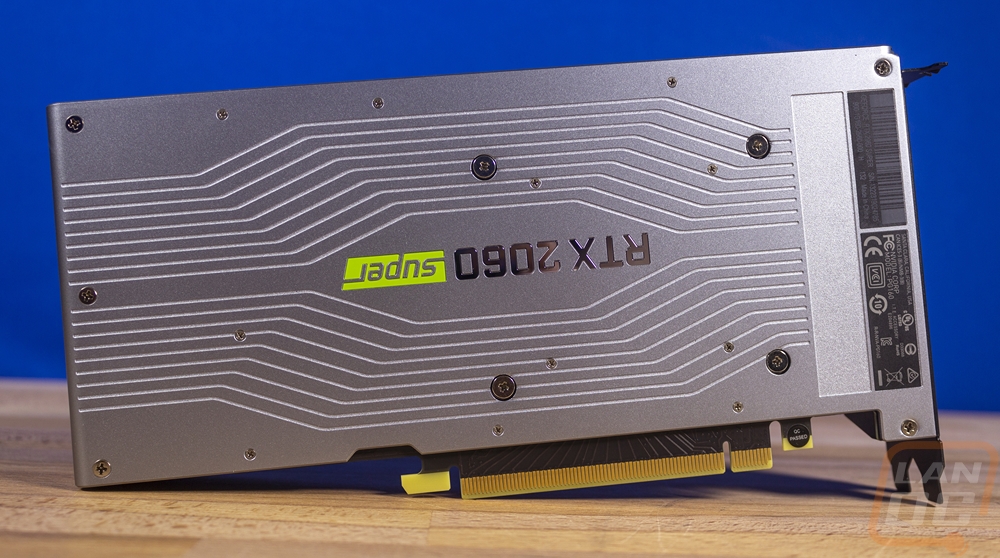 Nvidia didn’t change anything from the RTX 2060 to the 2060 SUPER as far as the display connections. This is their highest model to still get DVI. You also get two DisplayPort connections and one HDMI for the full mix of what most people use. The small Type-C connection in the bottom right is a special USB-C VirtualLink port. This can be used like a normal USB Type-C connection including using it for SSDs and other devices including displays. I’m most looking forward to the VirtualLink usage though where VR headsets in the future can use that one port for power, display, and USB which right now you have to hook up all three into a box. Imagine just plugging in one thing for VR.

I also pulled our original RTX 2060 out and took a few comparison shots of the two cards together. The only difference is the chrome in between the fans and the bright green SUPER logo on the front and on the backplate. 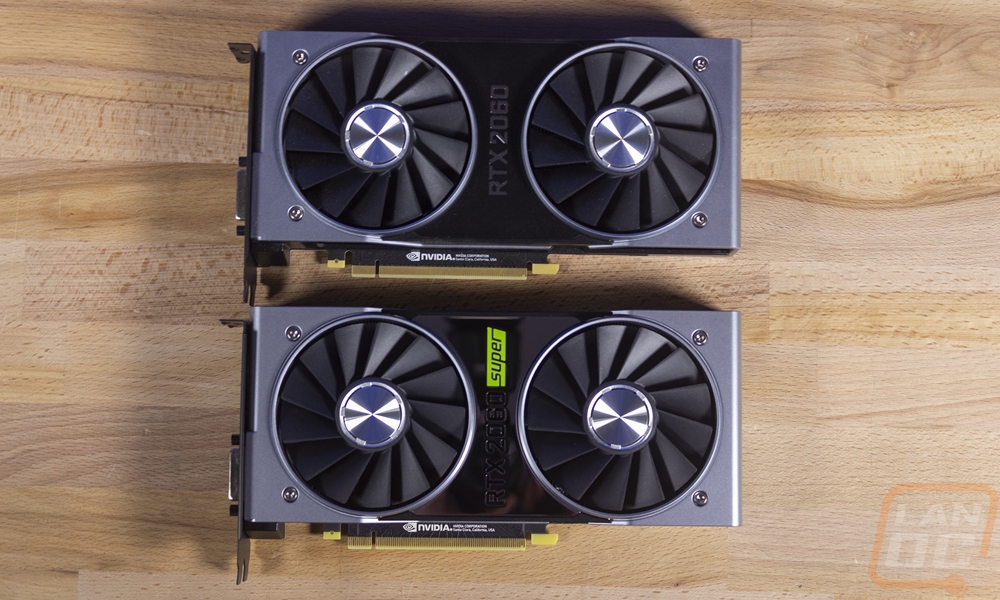 If you were curious what the top logo looks like lit up or what RGB lighting looks like on the chrome I also have a peek at that as well. 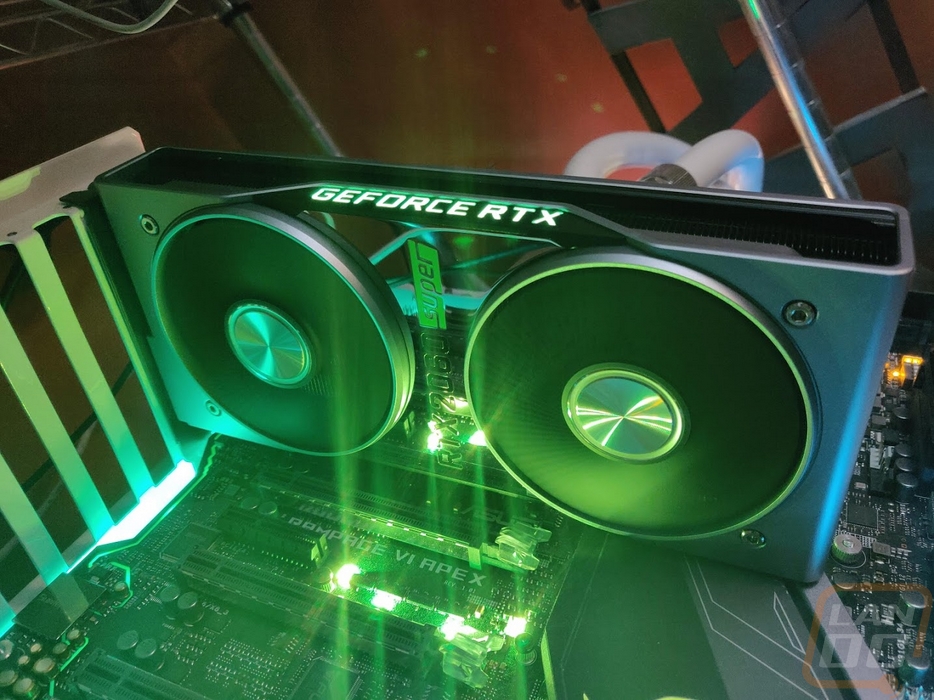 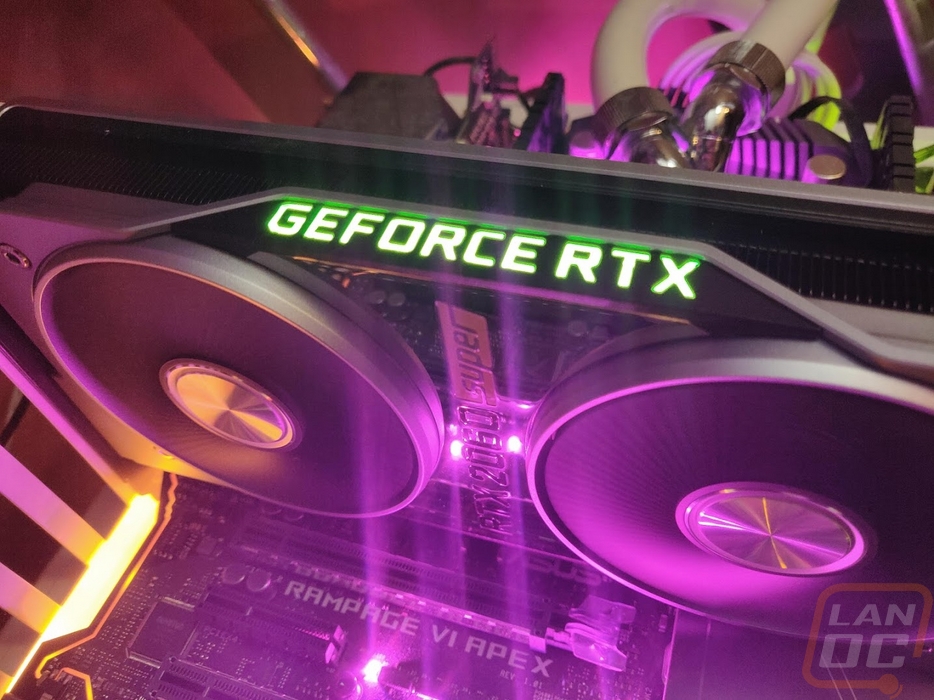 We have 1859 guests and one member online