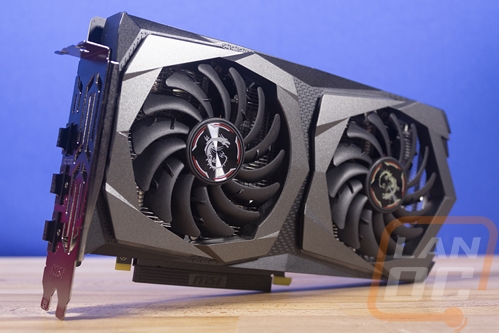 Well, being late to the party on this one means I’m not exactly dropping a big bomb here when I say that the GTX 1650 is a flop when it comes to price vs performance. This should have been obvious when Nvidia didn’t let people test the cards prior to launch but normally they are a lot closer to the mark than this. The GTX 1650 Gaming X that MSI provided is their highest end card and it has a huge overclock over the stock GTX 1650 speeds that Nvidia announced. Even with that the RX570 performed better in nearly every one of our synthetic, in-game, and compute tests. Now the GTX 1650 is perfectly fine to game at 1080p, in fact, it was playable in all but one test I ran. But to stay at least over 60 FPS you may need to run a little lower settings on some of the higher detail games. If the standard esports titles are more your thing though you aren’t going to have any trouble and that is really the best thing about the GTX 1650. This is the sweet spot for people who play at 1080p who want great performance in their standard cards and to still be able to play higher end titles from time to time.

The MSI Gaming X specifically had its pro’s and con’s. They used the same cooler design that I really have liked on a few MSI cards lately. The black with dark grey looks good and is going to match just about any build. I could go without the white branding section up on top personally but they do give you RGB lighting where that is going to be rare on a card in this price class normally. This is a full sized card when most other GTX 1650s aren’t and the cooling reflects that. This is a tall card though, so make sure it will fit in your case. The cooling did show a little uneven in our thermal images so there is even more room for improvement there but frankly it wasn’t needed at all. The fans were turning off while the card was under full load even. The power usage was impressive as well, especially when compared to the RX570.

So the GTX 1650’s performance isn’t really the big concern, even having the RX570 be faster isn’t a concern being slower than another card doesn’t mean that it won’t get the job done. But the price needs to reflect that. Nvidia went with a $149.99 MSRP on the GTX 1650 and at that price, the RX570 is a much better deal at $129. That doesn’t even include game bundles where AMD is including a copy of The Division 2 and World War Z and Nvidia is including a Fortnite bundle. AMD's bundle is more valuable though I would also say that Nvidia’s is better fitting for the card. As I mentioned before this is a great card for games like Fortnite and LoL. The MSI GTX 1650 Gaming X specifically is even more with a scary $179 price tag. Overall I think I would hold off on the GTX 1650 until pricing improves. The performance is there for it to be a good value card we just have to hope the value eventually shows up. Right now though I would be looking at the RX570 if I were shopping in this price range. 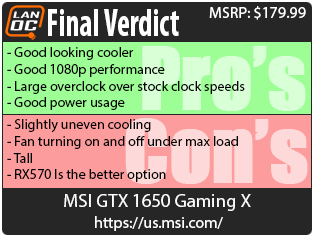 You might call him obsessed or just a hardcore geek. Wes's obsession with gaming hardware and gadgets isn't anything new, he could be found taking things apart even as a child. When not poking around in PC's he can be found playing League of Legends, Awesomenauts, or Civilization 5 or watching a wide variety of TV shows and Movies. A car guy at heart, the same things that draw him into tweaking cars apply when building good looking fast computers. If you are interested in writing for Wes here at LanOC you can reach out to him directly using our contact form.
Discuss this article
Log in to comment
Posts in discussion: MSI GTX 1650 Gaming X