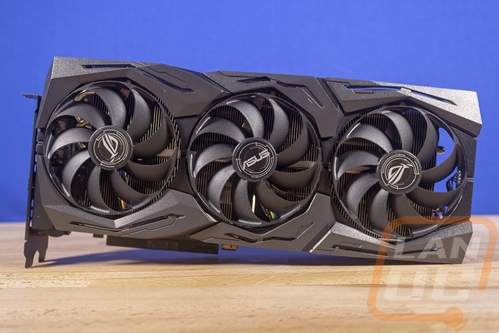 At first glance, the RTX 2080 Strix looks a lot like past Strix cards but there were a few big differences. For starters, this card is large, really large. It is a full 2.7 slot card and Asus takes advantage of every bit of that where a lot of other cards are really closer to 2.1. Because of that extra space, this is also a very heavy video card. The styling of the fan shroud however still has that same angular styling that Strix cards have always had. This includes lighting above and below each of the three fans carved into the shroud. Everything is black, and the textured finish almost makes the black look like a flat black but it is still a glossy finish on top of the texture. The all blacked out look is nice, especially knowing it will go with most systems because it is color neutral. Asus didn’t try to slip in bright red accents on the fans like XFX did with their new RX590 cards. Overall I think the Founders Editions have a better styling, especially with the all-metal shroud design, but this is going to be the look more people prefer simply because of the color. 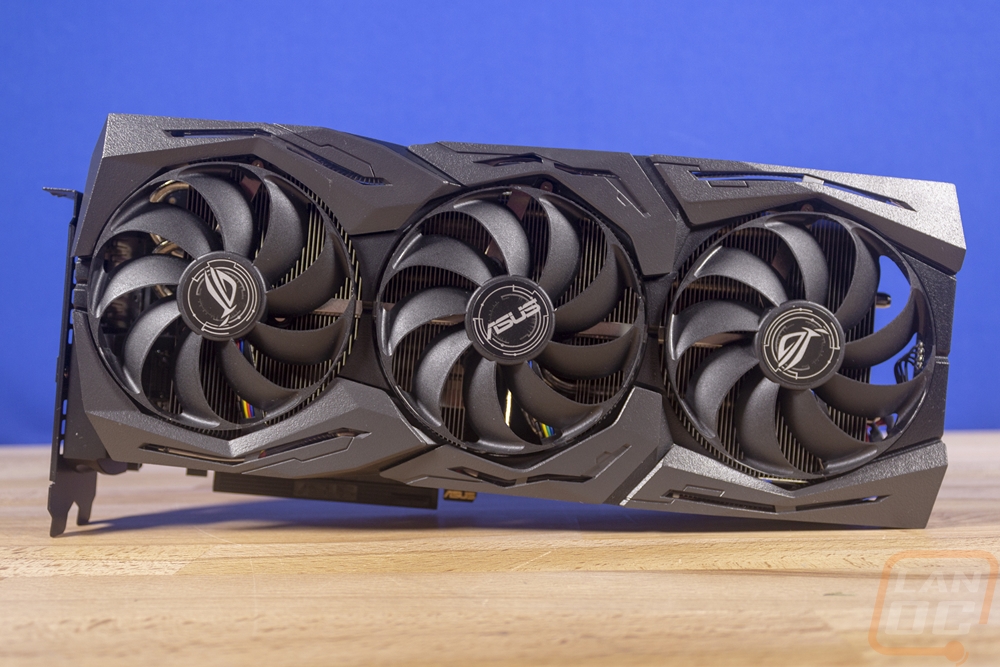 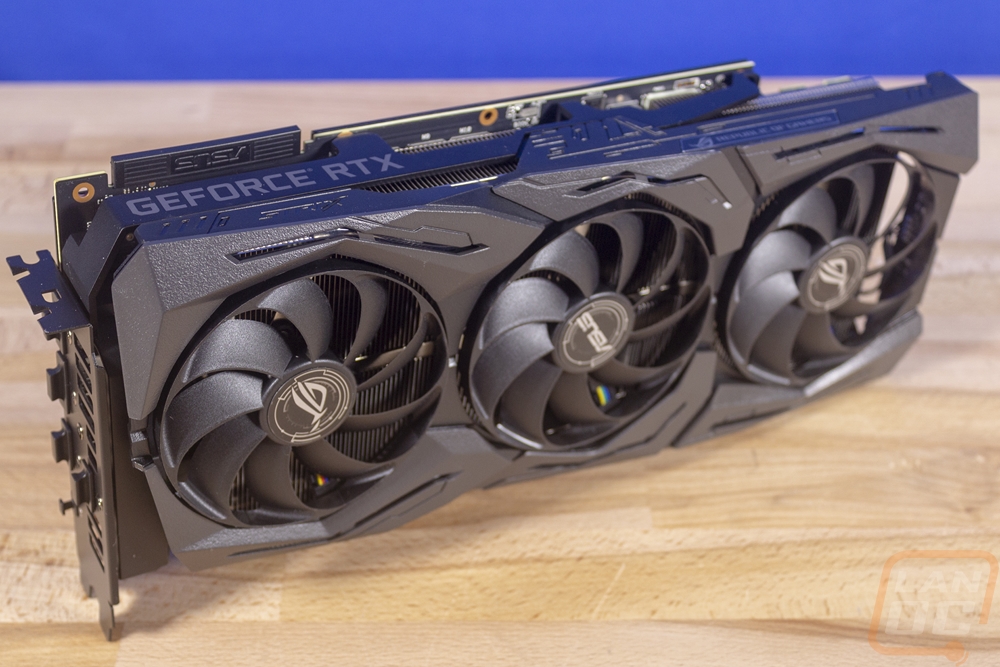 Asus did change up their fan design for the new cards. The old fans had a more angular look and they actually stuck out past the shroud with sharp edges that could bite you if you weren’t careful. The new design reminds me a lot of Noiseblocker fans. This is because the outside edge of the fan now has a ring that locks all of the blades together. Asus calls their new fans their Axil-tech fans. They have a smaller hub design for longer fan blades, this adds more airflow. Then, of course, they have the barrier ring that they use to add more structure and down pressure. They are also now IP5X dust resistant so hopefully, that also translates to fewer fans failing, not that I have ever had an issue with that on an Asus card. 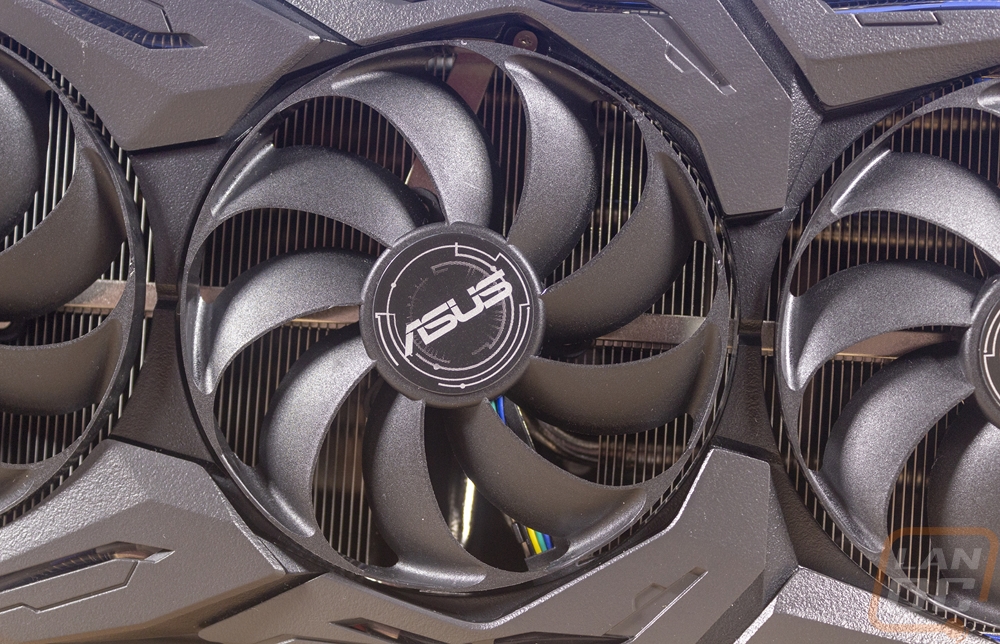 Looking around at the top, bottom, and end of the Strix 2080 you can really finally see just how thick the card is. More importantly, you can see that they took advantage of every bit of that space with their heatsink, it isn’t generic, it does form to the PCB shape to get as much surface area as possible. The design is so thick that the shroud can’t cover all of the top edge so Asus had to add a metal support bracket across the top. This is where they put the Geforce RTX branding, but the shroud itself still has the Strix logo embossed into it and the ROG branding is down near the end but backlit from the same lighting that does the front f the card. The logo isn’t very large, personally, I would prefer to see the RTX or RTX 2080 to be lit up here in the larger font. If you are going to spend this much, you might as well be able to show off what it is right?

The end of the card has a few other additions that only Asus does. They have two fan headers and a four pin RGB header on the card. The fan headers are cool because you can have the case fans that blow on the card be controlled by the GPU temperatures, not the CPU like normal. The RGB header is added to give another Asus Aura lighting option, especially nice if your motherboard doesn’t have RGB.

In addition to the metal brackets on the top and bottom of the Strix 2080 to give it a lot of structure, it also has a solid backplate attached to it to help keep the card from bending from its higher than normal weight. The backplate has cutouts around all of the power MOSFETs on the back of the card to not block their airflow. The backplate is also cut out around the six mounting screws for the heatsink and from the looks of it, the backplate is actually attached with smaller screws from the front of the card in 11 spots so if you want this off the rest of the card will have to come off. Asus puts the model sticker on the backplate rather than the PCB for easy access to your serial number. Beyond that, the backplate does have a typical Strix like line drawing design on the back in a grey finish with the Asus and Strix branding at the top edge flipped for easy reading when installed in most cases. The ROG logo is in bright white and is actually cut out of the backplate with lighting behind it for a glowing logo. The other noticeable feature on the back is that push button just below the NVLink bridge connection up on top (for SLI). This is what they call the LED stealth button and it is the first time I’ve seen them include this but for those of you who don’t want lighting, this is a quick and easy option to turn the lighting off. Turning it off with software has always been an option, but it seems for every person who loves RGB lighting there is another going the other way complaining about it so hopefully, those people will be happy with Asus including this nuclear option. It does make me wonder if it also turns off the RGB connection on the end of the card. 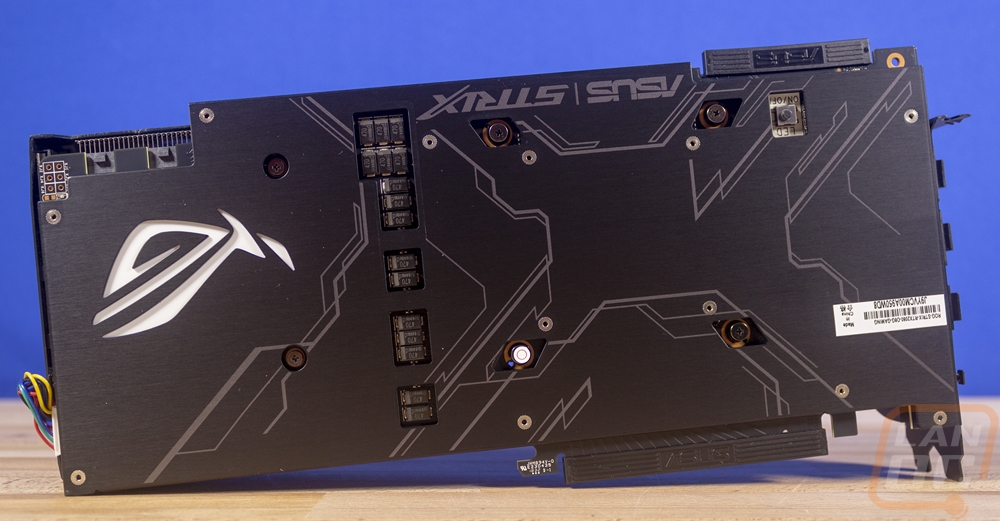 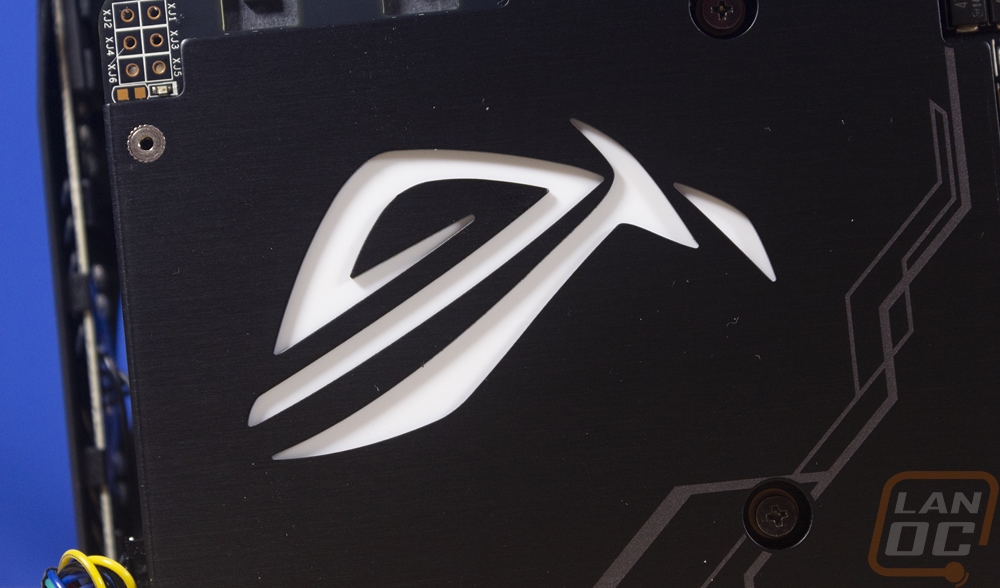 As for power connections, Asus bumped things up from the 6+8 configuration of the Founders Edition to two 8-pin connections. They are flipped around with the clips facing the PCB to allow the heatsink to be so close and the PCB is notched to fit the clips as is the backplate to fit the lower connection hight in relation to the rest of the card. That last part is really important, this card is already very tall, if the power connections were on top of that it wouldn’t fit in a lot of cases. By doing this they have basically used the space that is needed for the power plugs anyhow to add additional height and more cooling capacity. 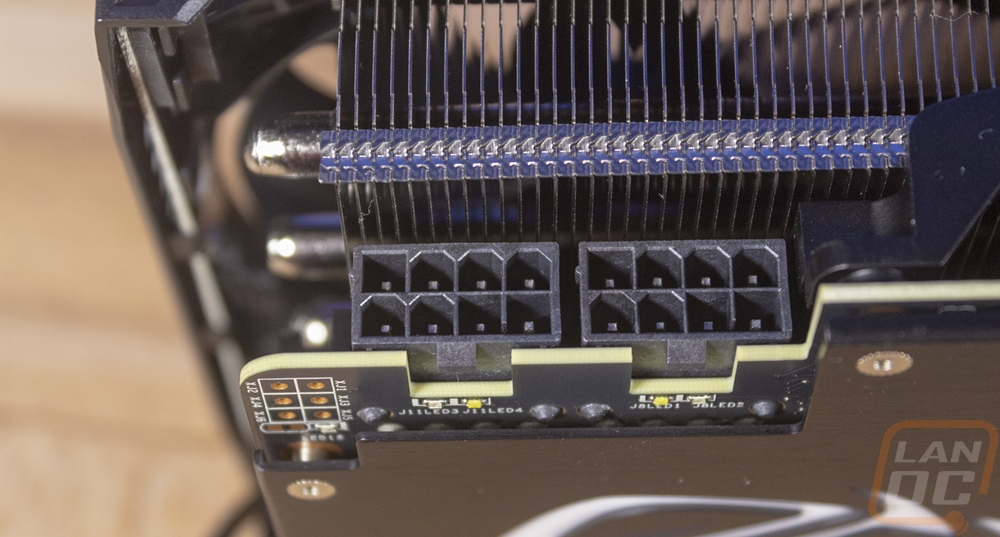 Also up on top in the middle of the card is a small BIOS switch. It is so small that I actually missed it in my initial pictures, hence my picture from the test bench. This switches between a normal mode to a quiet mode. It doesn’t change the power profiles or the clock speeds, just the fan profiles. Those could, however, change performance considering how boost clocks work so it is important to note that all of our testing including sound testing was done in the P mode. Moving the switch to the right is Q mode, q being for quiet. 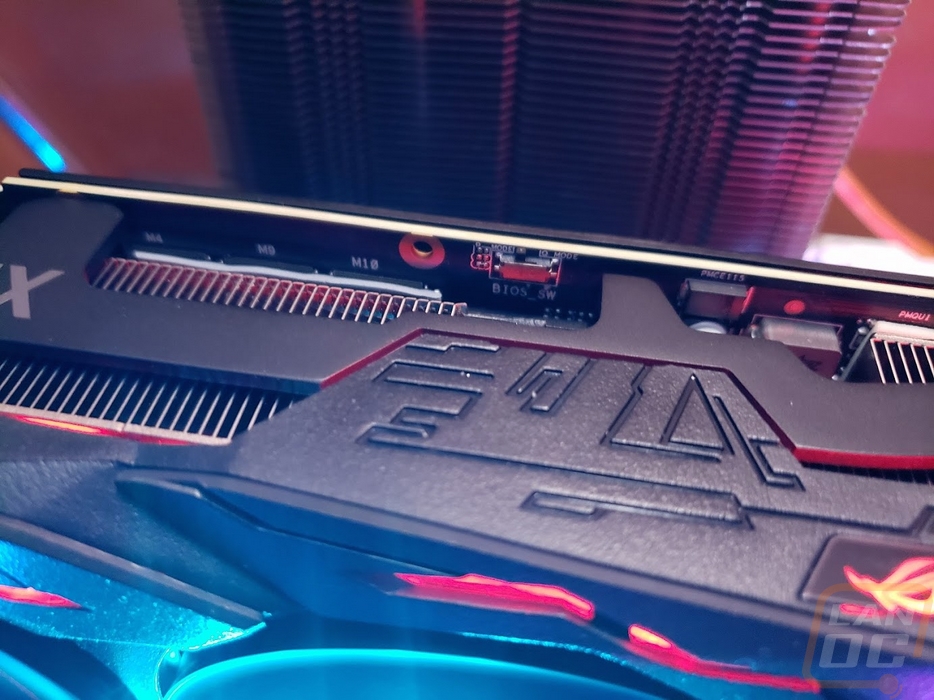 Back on the PCI bracket, the Strix 2080 has a slightly different layout as the Founders Edition RTX 2080. Rather than three DisplayPort connections, Asus switched things up to two. They replaced that extra DisplayPort with a second HDMI port. Having used the RTX 2080 Ti in my own rig from the launch to now I can see how this could be helpful. This mix gives better support for older dual monitor configurations without DisplayPort while still having support for new monitors in a dual monitor configuration as well. People running more than 2 monitors like I am are a lot rarer and sometimes run a mix of monitors as well. Asus did still include that tiny Type-C connection as well. This is for future VR support with it handling the display signal as well as data and power for a single connection setup. The bracket itself is blacked out just like the Founders Edition. This might seem like a small detail, but it looks great when the GPU matches the black I/O from most motherboards and the black back of most cases. As for airflow, there is some on the top half with the exception of that HDMI port, the slots they did add are wide and should let some of the airflow out though most will still go up and down from the heatsink orientation.

Saying 11.8 " x 5.13 " x 2.13 " Inches or 29.97 x 13.04 x5.41 Centimeters might help some people get an idea of the Strix RTX 2080’s size but for me, I always like a nice comparison shot. Here is the card next to the GTX 1080, a mostly “stock” sized card that doesn’t go much over the top of the PCI slot bracket top. You can see about an inch of extra height on top and on the end but it’s the top down comparison that really puts things in perspective in my opinion. “Just Look At It” The Strix has been bulking up during all of the mining, its thick. They say 2.7 slots, but it really looks a lot closer to a full three slot card to me. It will be interesting to see how that works for cooling later in my testing.

I also have live shots of the Strix 2080’s lighting as well. This better shows how all of those slots carved out above and below each fan is lit up on the fan shroud. Then there is the ROG logo up on the top edge. That logo is not only small, but really the lighting doesn’t light it up as well as the fan side. All of the lighting is Aura controlled with Asus’s software. It defaulted to red for me as you can see, but you can control the lighting all together to change it to any other color you would like.  I didn’t get a picture of it, but the ROG logo on the backplate is also lit up and is extremely bright. 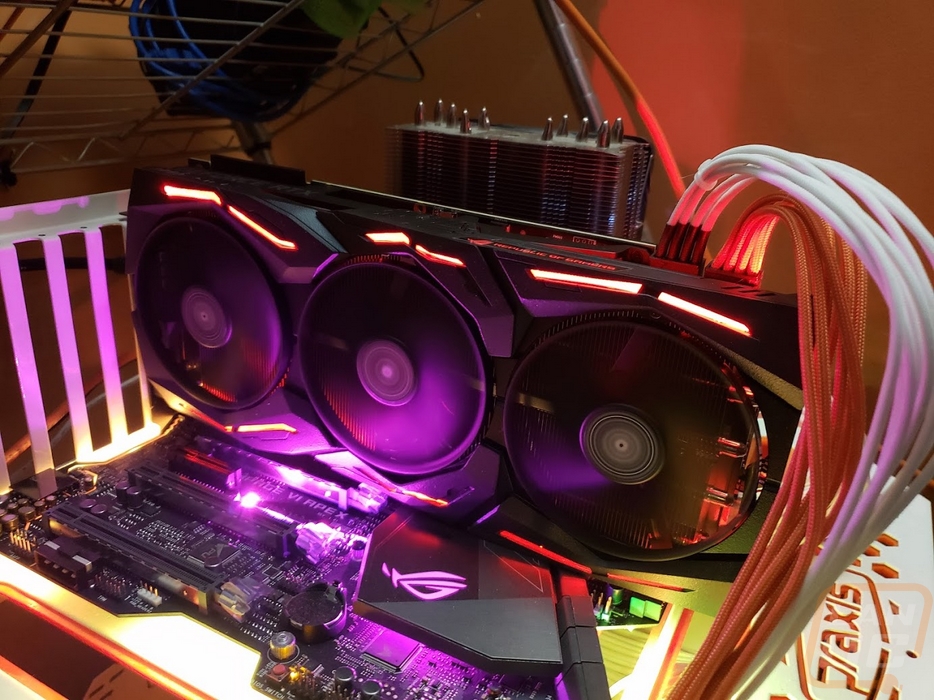 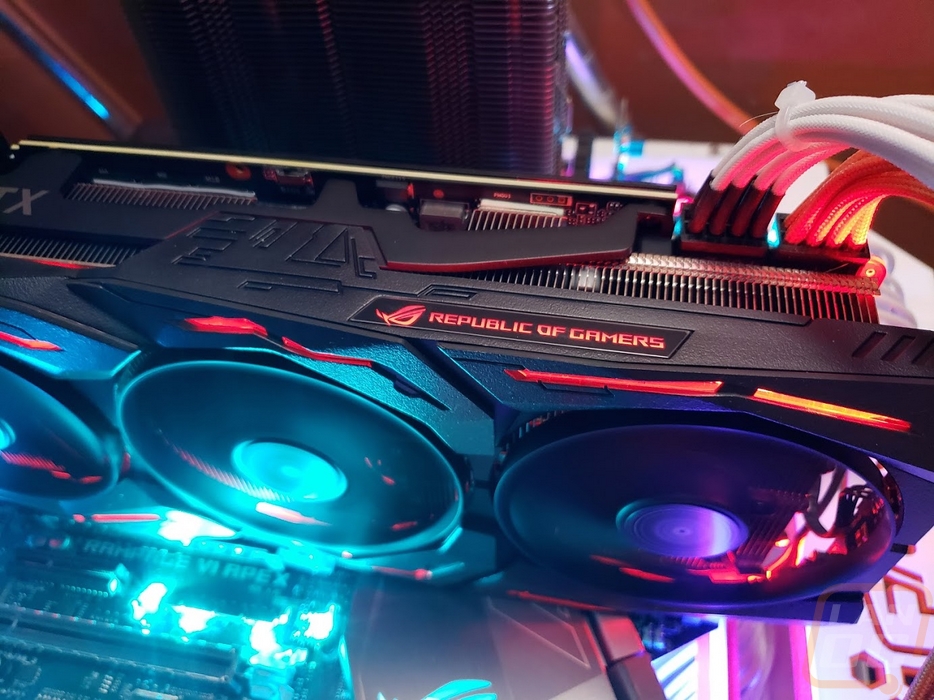