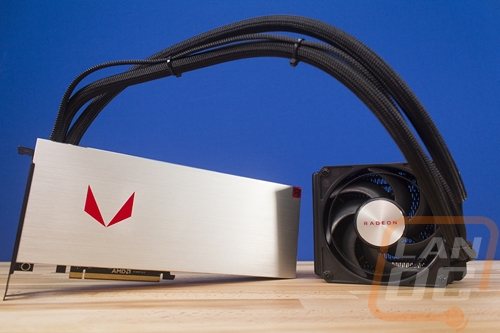 My last batch of tests were focused on everything else basically. Normally when comparing two cards with the same GPU this is where you can find the differences between the manufacturers. In this case, though this is the only Vega card I’ve had the chance to look at (so far) so I’m just seeing how it compares to the competition. The first test was loading up our testbench with the Vega 64 LQ on it and seeing just how much power it pulls. With this being the highest end model AMD has this specific card cranked up with a crazy 345 Watt TDP, for comparison the air-cooled Vega 64 has a 295 Watt TDP. So the actual numbers I saw do make sense with this single card setup pulling 526. This is just about 130 watts higher than the GTX 1080 Ti and even more from the GTX 1080’s that this card runs with. In fact, it was up in the range of two RX580’s in crossfire lol. So don’t plan on going Vega without having the power supply to push it, especially if you run it on an X299 or Threadripper setup. 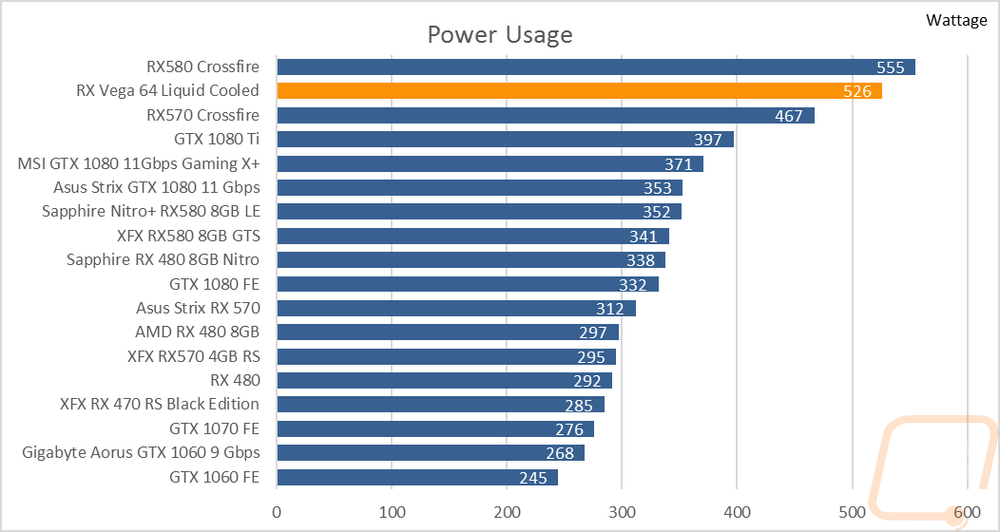 For fan noise, this is a rather unique setup as both the pump and fans are a noise concern. Though when I did my testing it was surprisingly quiet at both high and mid fan speeds. The fan speed chart only shows the pump speed though, I think the 120mm fan on the radiator was running lower to get those numbers. It should be noted though that later in my testing our pump did start to develop a rattle. I reached out to AMD about it twice over a long period of time. In fact, waiting to hear from them was the main delay for this article (then we moved as well), but I never ended up hearing back from them. Pump noise happens sometimes on AIO coolers so you can’t really blame AMD on this one, but I do have to note it. 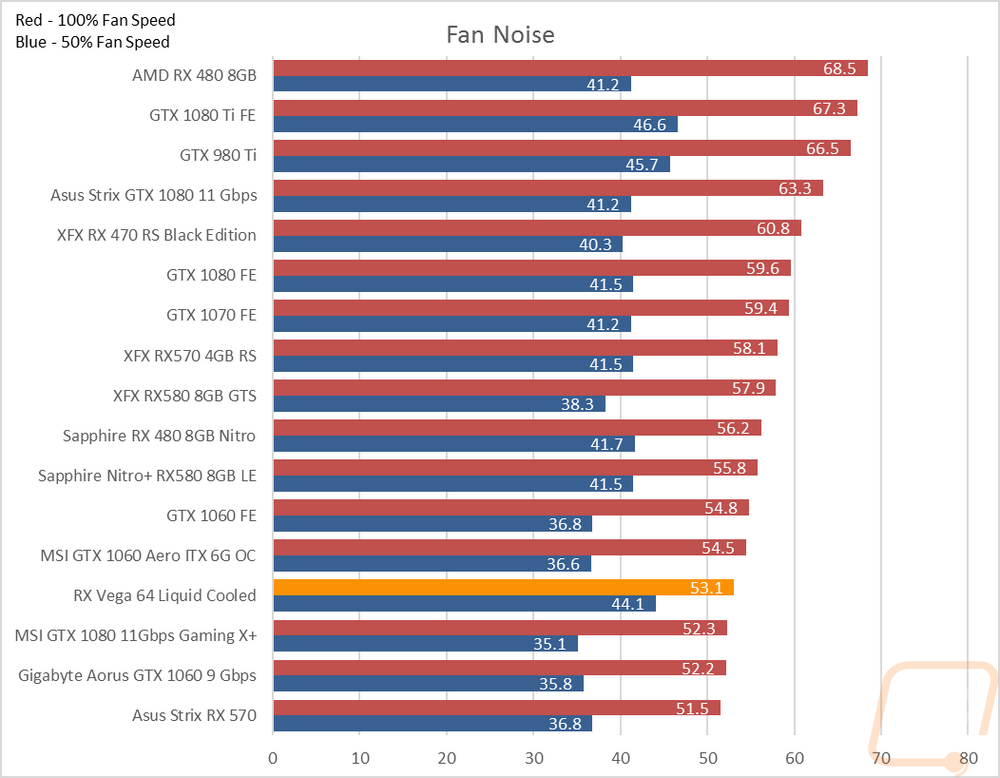 My last tests were focused on the heat or cooling performance. Given the extremely high power usage, I was really concerned how warm the Vega 64 LQ might run, even with water cooling. So my initial test I was surprised to find that the stock fan speeds kept it in the middle of the pack at 67 degrees. Apparently, the 120mm AIO is enough to handle all of that heat. Cranking the fan all the way up dropped the numbers down even more to 44 degrees. Landing down near the bottom of our charts. It might pull a lot of power, but the liquid cooled version at least has the cooling to be able to handle all of that heat! 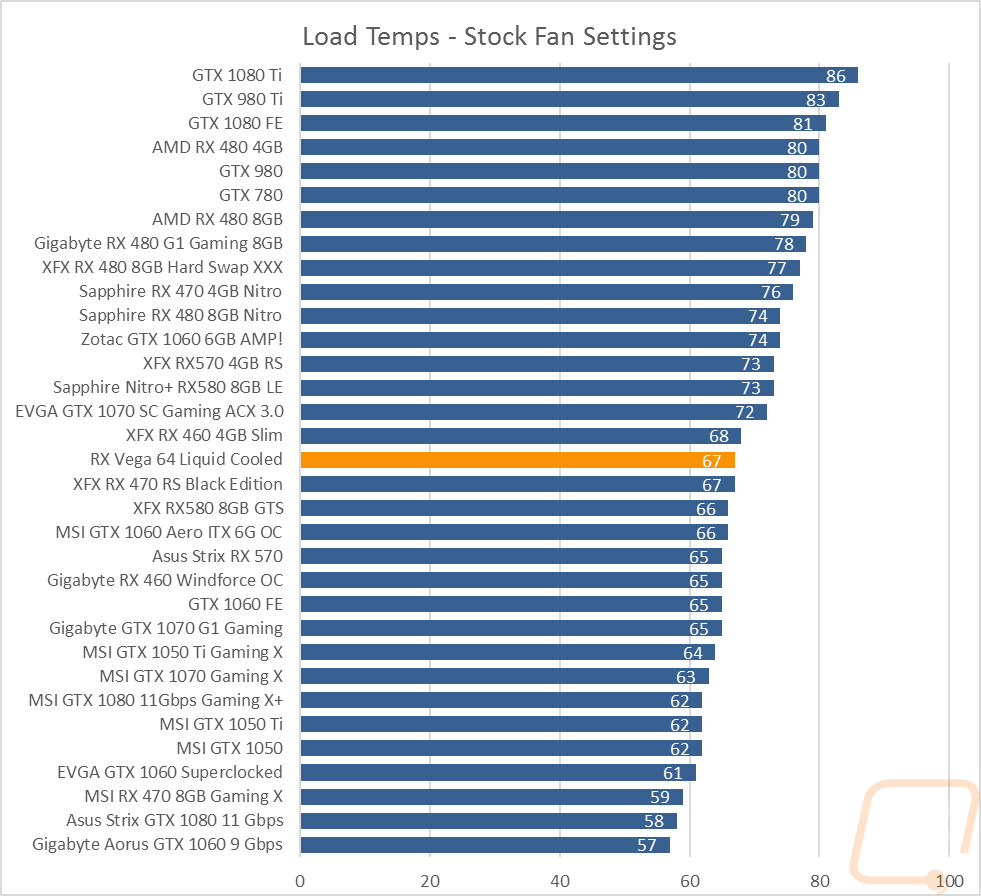 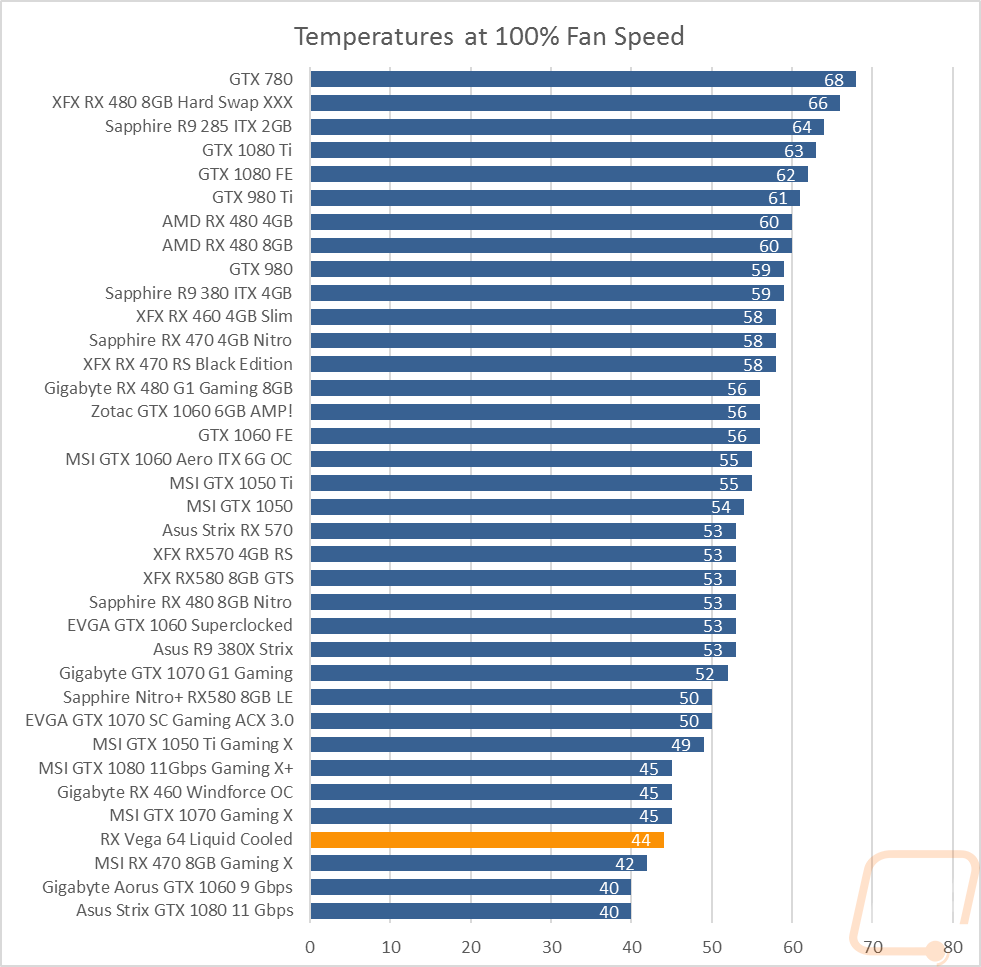