So when it comes to higher end video card, currently at least, you only have a few GPUs to pick from. You can get the GTX 1080, the GTX 1080 Ti, or look at a multi-card configuration. A single card is always the better option, especially at higher resolutions though. As part of the GTX 1080 Ti launch Nvidia also slipped the same 11Gbps memory into their older GTX 1080, so now there are a few 1080’s on the market that are offering a nice bump in performance while still being a little cheaper than the GTX 1080 Ti. Last month I took a look at the MSI version and today the Asus Strix model. They both ended up performing very similar and extremely good. Basically, you can throw anything you want at this card and with the exception of 4k you aren’t even going to have to worry about ever turning anything down. At 4k I did have a few games that I would want to toy with the settings for a smoother experience but man at 1080p and 1440p the 120Hz+ monitor owners out there are going to love this card.

In addition to the gaming performance, I was blown away by the cooling performance. Asus packed a large cooler on to this card but it really shows in the testing. This was the coolest running card out of ALL of the cards tested at both stock fan settings and with the fans cranked up. This includes going up against cards like the GTX 1050 that just don’t put out any heat. Power usage was much better than the MSI and really the only performance issue I had was with the fan noise when the fans are cranked all the way up.

The card's design looks great to me, I love the color neutral design paired with a touch of RGB lighting to match your build. The backplate looks great and had that backlit ROG logo on it as well so it is going to catch your eye when installed in a normal case with the backplate facing up. The overall construction was solid and it didn’t seem to flex or move around at all. Asus even added two fan headers that you can set case fans to turn on when your video card needs air, not just when the CPU needs it. The only other downside to the card is the overall size. This is a huge card. With three fans it is long, tall, and it takes up two and a half slots or more when you add in the backplate so make sure it is going to fit in your PC.

So how does it compare to the MSI? Not locking you into a red and black theme is a big deal for me for one. But really I still can't find the MSI available anywhere so it doesn’t even matter. There are Zotac and Gigabyte cards also available with the new 11Gbps memory and the Strix is the most expensive out of the three. I have a hard time imaging that the other two would keep up in cooling, but without testing them it is hard to say for sure. Asus does have a lot going on here and they packed the Strix GTX 1080 11Gbps full of features and performance. So if you want more performance than the GTX 1080 gives you but can’t afford the GTX 1080 Ti this is the card to go with. I personally plan on using this card in an upcoming build for my wife, even with the wide range of games she plays I don’t see her running into any that will slow this thing down. 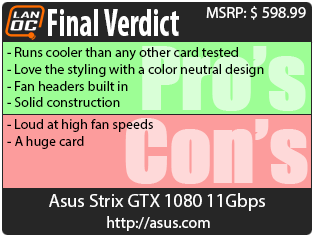 You might call him obsessed or just a hardcore geek. Wes's obsession with gaming hardware and gadgets isn't anything new, he could be found taking things apart even as a child. When not poking around in PC's he can be found playing League of Legends, Awesomenauts, or Civilization 5 or watching a wide variety of TV shows and Movies. A car guy at heart, the same things that draw him into tweaking cars apply when building good looking fast computers. If you are interested in writing for Wes here at LanOC you can reach out to him directly using our contact form.
Discuss this article
Log in to comment
Posts in discussion: Asus Strix GTX 1080 11Gbps