After checking out the Strix RX 570 I had at least an idea of what to expect with the look of the Strix GTX 1080 11 Gbps, just everything is scaled up. Rather than two fans, this card has three. It is taller and longer and at 2 and a half slots wide it is also wider. It is a big card, hopefully, that does mean they packed in a lot of features and great performance though. The styling is a continuation of the same look at well. This is the Strix look with a color neutral design with its dark gray and black design. For coloring, they use Asus’s Aura Sync to power RGB lighting all over the front and top of this card. Each of the cuts in the shroud above and below the fans has lighting, it's not too much and it isn’t in your face, it is just right if you ask me.

Like I said the card itself is two and a half slots wide and from the looks of it, they used all of that space to pack in a thick heatsink. From the top, you can see the heatsink touching the GPU with that “MaxContact” pad and from there on up it is all heatsink. The top edge of the card has a backlit ROG logo and you can see the Strix logo embossed into the shroud as well along with Geforce GTX slipped in as well on the heatsink. Unlike other cards Asus doesn’t have heatpipes coming up to the top or the bottom of the card, they just have them run left to right inside of the heatsink to spread the heat out across the heatsink so the three cooling fans can do their job. The fan shroud only covers the front and just a slight bit around all three visible edges with the rest open for all of that airflow to vent inside of your case.

Down on the end of the card in addition to the lighting and fan connections at the end of the PCB Asus slipped in two 4-pin PWM fan headers. This is something completely unique to them and it is a little confusing at first. Basically, you can hook up case fans directly to the video card. Normally running on a motherboard the fans will only worry about your CPUs temperatures. This ignores the fact that your video card actually puts out more heat. So if you have fans close to the card you can hook them up here and the video card will turn the case fans up as needed to make sure it has cool air coming in. For clean wire management wires coming out the end of the card might not be ideal, but for cooling, I love the idea.

Up on the top edge of the card you do have two SLI bridges for SLI support, to get the most out of that you will need a newer high bandwidth bridge though. For power, the Strix requires an 8-pin PCI power and an additional 6-pin PCI power to keep things running. This is more than the Founders Edition with its single 8-pin but it is inline with any of the overclocked GTX 1080’s. The power connections do sit lower than the rest of the card, this is a nice touch given the higher of the card to help with clearance. They have also flipped around with the clips on the PCB side with the PC notched for those as well to give the heatsink more room. If you look closely you can see that they used that space to put the heatsink right up next to the connections.

Down at the PCI slot end of the card, the Strix has a unique display connection configuration. Most cards these days are going with one DVI, One HDMI, and three DisplayPort but this card has Two DisplayPorts, Two HDMI, and a DVI. Depending on the user this could be a good thing or a bad thing. I personally have moved to using all DisplayPorts so it would cause me issues but others might really need the extra HDMI, especially with the HTC Vive requiring one for VR. This end of the card isn’t really designed for ventilation but there is a small vent next to the DVI port. Also from this end, we can really get a better idea of the total height of the card. Standard cards are just a touch higher than the top of the PCI bracket but this card is about an inch above the bracket. I’ve seen taller but I’m always extra careful when it comes to card height, a lot of the older cases especially just don’t support it. 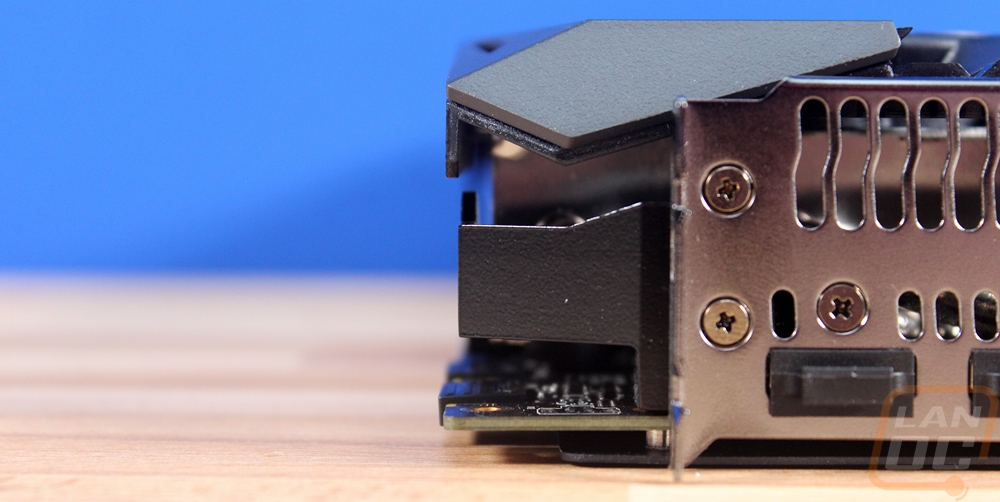 The back of the Strix GTX 1080 11Gbps has a lot going on as well. There is a backplate covering up the PCB but we can still see a few things. Rather than just round holes to access the screws Asus integrated the screw holes into the design as well as cutouts for ventilation in other areas. The aluminum backplate has a brushed finish with black painted lines for a hard to see detail as well as the Asus and Strix branding also in black up on the top edge. The large ROG logo is hard to miss though, it is white on the black backplate and when you power the card up it is also backlit in RGB with full control in the software. Up on the top edge is a notched out area to access a small voltage testing pinout as well.

We have 1463 guests and no members online