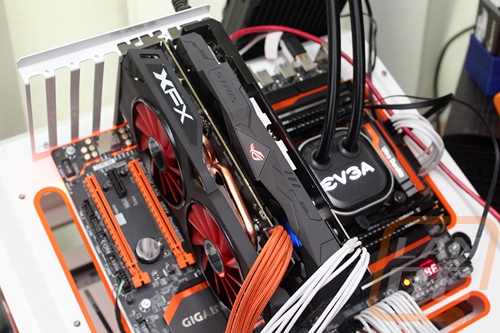 So what about power? How much power do you need to run two RX 570’s in Crossfire? Well on our test system the two cards ended up pulling 467 watts while under full load. Just like the single RX 570s did, the pair pulled a lot of power with just the RX 580’s pulling even more. For comparison, the GTX 1070 was close in performance when Crossfire was supported and it pulled 276 watts, even the GTX 1080 Ti only pulled 397.

So over the last few years, I have been critical of running dual card configurations both from Nvidia and AMD. They really only help if the games you like to play have Crossfire support and that is hit and miss. AMD also doesn’t really have a documented list of the games that are supported either, that would make a big difference. Later on, as drivers evolve support for your game can also go away, I’ve had that one happen in the past even with the games and benchmarks that we test with. The ironic thing is while being critical of SLI and Crossfire I have been running dual, triple, and quad card setups in my own PC. But the reality is that it normally isn’t a good value. Two RX 570’s are going to run you $380 or more where the GTX 1070 can be had for a little less and it will work with all games. 1440p and 4k are also important here as the RX 570’s don’t really scale up to those resolutions as well. Now a year from now as prices drop and the next best thing is coming out, picking up a second RX 570 might be just what you need to get a little extra performance, but that is only if your games support it. Everyone else should get a single card that works for you.