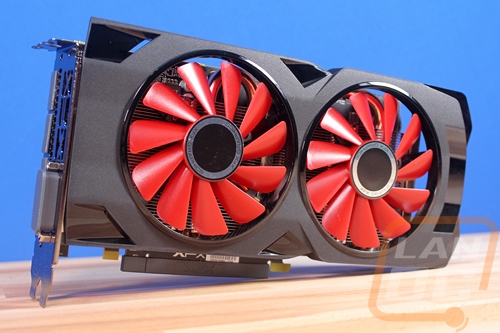 So for our first look at the refreshed RX 570 how did the XFX RX 570 RS come out? Well if you came in expecting to upgrade your RX 470 to a 570 this isn’t going to be the card for you. The RX 570 is a refresh of the RX 470 with just higher clock speeds but when comparing the XFX RX 470 RS and the XFX RX 570 RS the clock speed gap is very minimal. In fact, the performance difference between them wasn’t much as all in my testing today. With the RX 470 going away, the RX 570 still has a place. It has the 1080p gaming performance needed for a mid-range build and it comes in priced less than the RX 580 models.

The XFX card specifically had decent but not amazing noise performance, good 1080p gaming, and for some people, the look should fit well in their build. I like the shrouds design but the decision to go with red fans really locks the card into the red/black theme, I wish it still had the swappable fans or at least a black fan design that would go with most builds. The shroud is longer than it needs to be as well, that was a complaint I also had with the XFX 580 and while this is a different design they did the same thing here.

At the $189.99 price point that I found the RX 570 RS to be priced cheaper than the rest of the current RX 570 offerings. So if you are set on going for a 570 it will be a good deal and if you are looking at AMD, in general, it is a better deal for good 1080p performance than going with the RX 580. Where the decision gets a little tougher is when you look at Nvidia’s cards as well. Right now I’m seeing GTX 1060’s from 179.99 with an additional $20 rebate. At that price, the GTX 1060, being a faster card in most cases, ends up being a better deal. This isn’t on XFX though, it seems like AMD has all of the RX 570’s priced a little high right now. That said, I’m excited to see how the XFX RX 570 RS compares to other RX 570 in the near future. 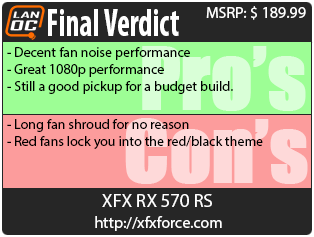 You might call him obsessed or just a hardcore geek. Wes's obsession with gaming hardware and gadgets isn't anything new, he could be found taking things apart even as a child. When not poking around in PC's he can be found playing League of Legends, Awesomenauts, or Civilization 5 or watching a wide variety of TV shows and Movies. A car guy at heart, the same things that draw him into tweaking cars apply when building good looking fast computers. If you are interested in writing for Wes here at LanOC you can reach out to him directly using our contact form.
Discuss this article
Log in to comment
Posts in discussion: XFX RX 570 4GB RS